Suddenly, more Americans are learning what it means to live and travel and conduct business in the “Constitution-Free Zone.”

Usually when The 5 brings you a business-travel alert, it happens midissue and it spotlights some inane and/or arbitrary practice of the TSA. This morning, matters are more serious… and so they leap to our top spot.

Maybe you saw the story. On Wednesday night, passengers aboard Delta Flight 1583 from San Francisco to JFK airport in New York heard a confusing and disconcerting announcement from a flight attendant moments after landing. One passenger recalled it like so to Rolling Stone: “You’ll need to show your papers to agents waiting outside the door.”

Other passengers tell a similar story… 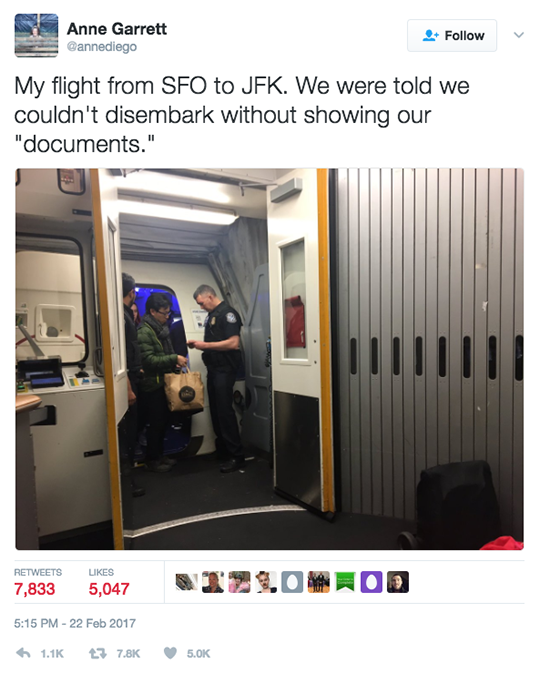 Passengers who weren’t completely cowed asked for an explanation. But none was forthcoming.

It turns out the jackbooted thugs were from Customs and Border Protection. They were demanding IDs at the conclusion of a domestic flight.

What gave them jurisdiction? CBP says an immigration judge had ordered someone on the flight hauled into custody; he’d been convicted on a handful of charges including domestic assault.

Only that person wasn’t on the flight after all.

You can never rule out sheer incompetence — this is the government, after all — but in light of the massive paper trail you leave by the time you board an airplane, how could their man not be there?

A CBP spokesman tells Rolling Stone that what the agency did is “nothing new” and there’s “no new policy.”

Whether the policy is new or not, it’s completely in keeping with CBP’s broad definition of America’s “borders.”

As we first explained nearly five years ago, the government has steadily carved a “border search exception” out of the Fourth Amendment. And the border extends 100 miles inward. Under the law, CBP agents can operate freely within this area as long as they hide behind the excuse they’re looking for illegal immigrants.

Back then, the ACLU called it the “Constitution-Free Zone.” Somewhere along the line, the ACLU wussed out and dialed back the language. Now it’s the “100-Mile Border Zone.” Below, we reproduce the original map with the original title. 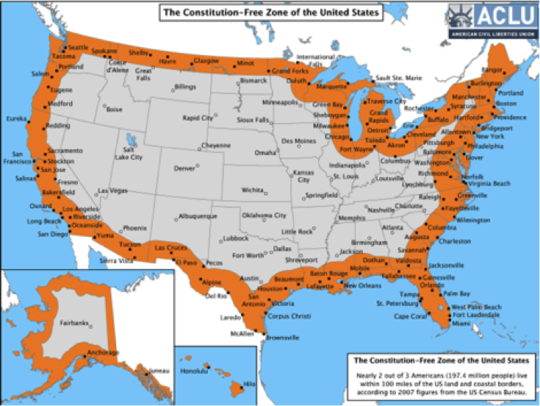 Two out of three Americans live within this zone. And it’s not all about the Mexican border; CBP conducts sweeps aboard Amtrak trains on the shores of Lake Ontario and roadblocks on interstates in New England.

[Riddle us this: What would the feds would have done if their man had been on a flight from, say, Denver to Atlanta? Maybe the same thing? They’re international airports, after all, and CBP has a presence anywhere considered a “port of entry.” In that case, you might as well draw an orange 100-mile radius around most every interior city on that map.]

The papers-please incident at JFK harks back to the Savannah Amtrak fiasco a few years ago.

In February 2011, agents from the TSA’s Visible Intermodal Prevention and Response team (VIPR, get it?) swooped down on the Amtrak station in Savannah, Georgia. “Everyone who entered the station was thoroughly searched,” recalled Trains magazine reporter Don Phillips, writing for CNN.

“The ‘rules,’ if there were any, seemed to be that if you entered the station, you went through a full search. If you walked around the station to get to a train or to get off a train — quite an easy thing to do at the Savannah station — no one bothered you.”

So it wasn’t about security. It was about a show of force.

It backfired badly, with a YouTube video of a 9-year-old being patted down after getting off a train. Amtrak temporarily banned VIPR teams from Amtrak property. Near as we can tell, nothing like the Savannah incident has happened since.

We can’t draw hard-and-fast conclusions, but we can engage in informed conjecture: What happened at JFK Wednesday night was the government testing how far it can push the envelope and still retain the consent of the governed.

We looked on social media for evidence of people threatening to boycott domestic air travel until Congress passes, and the president signs, a law forbidding papers-please checkpoints for disembarking passengers. Alas, our search was in vain.

Unlike Savannah, it looks as if the feds will get away with this one. They’ve set a precedent.

Sigh… To the markets, where our thesis yesterday continues to be affirmed: Wall Street is getting edgy about whether the Trump economic agenda will ever become reality.

Yesterday, Treasury Secretary Steve Mnuchin promised a tax cut would be enacted by August — which should have sent stocks screaming higher, but he offered no specifics, and so the major indexes ended the day mixed. That pattern continues today; at last check, the Dow is down 37 points, at 20,773.

“Momentum is beginning to wane,” says our Greg Guenthner — who couldn’t care less about events in Washington, but who does follow chart action closely. “Falling stocks outnumbered the ones finishing higher yesterday. Many popular growth names are starting to get hit with profit taking. That’s a recipe for a pullback.”

More from Greg: “As of Thursday’s close, gold has easily outperformed even the celebrated Dow industrials so far in 2017. 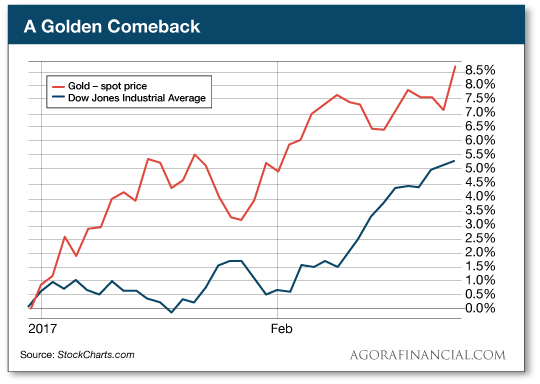 “If history is any indication, this rally has plenty of room to run.”

If the budding cannabis industry has been thrown “into a panic” — as USA Today would have you believe — it’s premature.

Yesterday, White House Press Secretary Sean Spicer suggested the prospect of a federal crackdown on states that have legalized recreational marijuana. “I do believe that you’ll see greater enforcement,” he said.

Pressed for specifics, he punted: “That’s a question for the Department of Justice.” DOJ had no comment.

We remain convinced Attorney General Jeff Sessions will have to pick his battles with the blue states, and he’s more inclined to go to the mat over immigration than over weed. We see affirmation this morning in a Bloomberg story:

“Republican Sen. Cory Gardner of Colorado, where marijuana production and distribution has become an established industry, spoke with Sessions before his confirmation about the business in his state and was assured there will be no sudden changes in policy.

“‘That was the take-away from my conversation with Jeff,’ Gardner said. ‘It’s not a priority of the Trump administration.’”

Bottom line: The crackdown on recreational pot is all vague speculation right now. The speculation will go on indefinitely until Sessions does one concrete thing.

He’ll have to rescind the “Cole memo” of 2013. A deputy attorney general at the time, James Cole, wrote a memo saying the Justice Department would take a mostly hands-off approach to “jurisdictions that have enacted laws legalizing marijuana in some form and that have also implemented strong and effective regulatory and enforcement systems to control the cultivation, distribution, sale and possession of marijuana.”

If Sessions goes back on the Cole memo, it will be with the disapproval of not only a majority of Americans, but a majority of his own party. Last April, CBS News found 70% of Republicans believe marijuana’s legal status should be “left to each individual state to decide.”

That’s right in line with the President Trump’s declaration while campaigning in October 2015: “In terms of marijuana and legalization, I think that should be a state issue, state by state.”

And even if the Cole memo is rescinded, Spicer was explicit yesterday that the feds will leave medical marijuana untouched.

As it happens, Ray Blanco has been extremely circumspect with his “penny pot stock” recommendations, concentrating them in the medical marijuana space. He’s been meticulous about protecting the downside in this volatile sector.

“Yesterday’s 5 confirms what I’ve always thought about the ability of Trump to really turn things around in this country,” a reader writes.

“Obama nearly doubling the national debt from $10 trillion to $20 trillion has pushed the country past the “tipping point,” and no matter what happens now, nothing is going to be able to change the final outcome, which is going to be an economic collapse and probably a Soviet Union-style breakup.

“Had Obama never been elected in the first place and Trump been elected back in 2008 and implemented the policies that he promised, then there’d be a very good chance that we could have survived this.

“As it stands right now, I feel that Trump being elected instead of Hillary has bought this country a few extra years of life. His policies will only slow the collapse, not stop it.”

“Political commentary,” reads the subject line of our next email. Hoo-boy…

“Everyone overlooked failure after failure of the previous administration for eight years! At least give the current administration eight months before pronouncing it dead. Also, take me off your email list. I have no use for a stock advisory service that is so closed-minded.”

The 5: Yes, we were totally in the tank for Obama. Get real…

On the subject of feral hogs and the unintended consequences of a Texas state plan to poison them, a reader writes: “OK, so when the hogs die in droves out in the wild, what happens to the then-poisoned carcasses?

“The critters down the food chain (birds, coyotes, field mice, rats, insects) devour what’s left, and what happens to them? This can go on and on.

“Maybe better to put a bounty on the hogs. Have a ‘culling day’ or two hunt. Collect the freshly dead hogs and distribute the meat to the needy, schools, hospitals, etc. Leave the bounty on to encourage more hunting of the hogs. They are very wary and cunning, so maybe an African-style large-scale herding drive to force large groups into a killing arena, area or field. Just brain(?)storming here.”

The 5: Almost anything sounds better than poisoning with warfarin, although in the course of casual Googling, we found an academic study on the subject from 1990…

P.S. In case you missed my note this morning… our publisher is about to pull one of our best-received video clips from the web.

It’s all about a guy who, despite never buying or selling a single stock, learns how to pull real cash from the market in three minutes flat.

Click here if you want to see it. After Monday, it’s gone.