In Search of Fort Knox’s Gold

If the president were serious about “draining the swamp,” we suggest a good place to start would be Fort Knox, Kentucky.

For decades, rumor has persisted that the 4,583 metric tons of gold stored there — more than half of the U.S. Treasury’s total stash — isn’t really there. Or if it is, perhaps the bars have been “leased” to the big banks, which proceeded to sell them to Asian buyers — rendering their chain of custody terminally “fubar.” 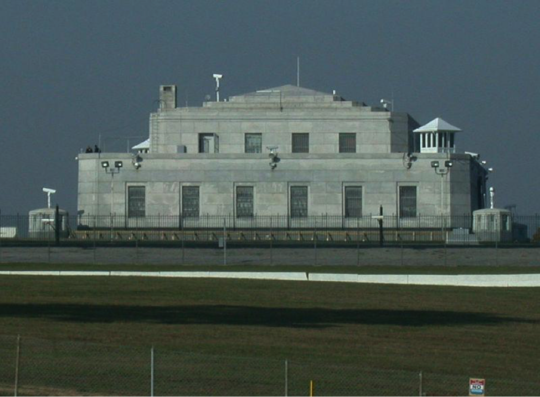 In hopes of untangling the mystery, gold researcher Koos Jansen filed requests under the Freedom of Information Act with the U.S. Mint. Mr. Jansen, who works for Singapore-based BullionStar, is already the go-to authority on China’s murky gold holdings. His work comes recommended by no less than our own Jim Rickards.

The Mint did what every government agency does when confronted with an uncomfortable FOIA request: It dragged its feet. It said it would dig up the relevant files — for the not-so-modest cost of $3,000.

Mr. Jansen then launched a crowdfunding campaign; he managed to raise the entire amount in less than 24 hours. Heh…

Alas, we don’t know any more now than we did before.

The Mint delivered 134 pages of documentation — nowhere near the 1,200 Jansen was figuring on. And those 134 pages (redacted, natch) merely raise more questions about whether the Mint has a consistent methodology for carrying out those annual audits.

“It should be clear,” he concluded, “that the Deep Storage gold has not been audited by professionals, but the precious metals have been verified by imbeciles.” Ouch.

For whatever it’s worth, the Mint was sufficiently embarrassed by the quantity and quality of its documentation that it refunded the $3,000 fee — which Mr. Jansen duly returned to the crowdfunding donors.

We won’t dwell on the matter today — or any other day, barring a startling new revelation. We’ll merely file it under the category of “Things That Are Interesting, or Even Maddening — but Are Completely Outside Your Control.”

“Since December, gold prices have been steadily rising,” says a note from our income specialist Zach Scheidt.

Indeed, they have, even though they’ve made a round trip from $1,230 to $1,260 and back over the last week… the trend is unmistakably up. 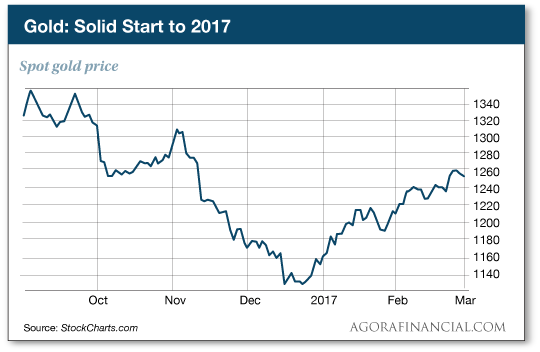 “The movement makes sense,” Zach tells us, “because there’s a lot of uncertainty in the market today. There are three main issues driving this uncertainty.

“We haven’t had a real bear market in nearly a decade. And stocks are very expensive compared with the profits companies are earning.

“That makes me (and other investors) concerned about the possibility of an upcoming bear market.

“Second, inflation is starting to pick up,” says Zach.

“This is normal, considering the overall U.S. economy is growing. But inflation is still a big problem for Americans with savings. If inflation continues to rise, it will erode the true value of money that savers have set aside.”

Indeed. Already, those stresses are showing up in the “income and spend” numbers from the Commerce Department that we mentioned yesterday. The pace of consumer spending growth slowed in January — even though incomes rose at a healthy clip. That’s because inflation is now running its hottest since 2012. People are feeling stretched.

“Buying gold is a good way to protect wealth against inflation,” Zach says. “That’s because gold typically trades higher when inflation is high, so savers who invest in gold are able to protect their spending power.

“It’s tough to know what announcement Trump will make next, and that makes investors nervous.”

For sure. The market ripped higher yesterday. But today? All the major stock indexes are in retreat. “Relief over a more constrained and on-message Donald Trump began to fade on Thursday,” says an account at The Street, “as questions remained over how the president would execute his plans.”

“In an uncertain political environment, holding gold is usually a good bet,” says Zach. “This way, even if a new policy announcement sends stocks lower, the price of gold will be a great way to protect wealth.”

And if you play it right, you can also use gold to generate steady income. Two days ago, he showed his premium subscribers how to collect an instant $360 payment. And that’s on top of $3,292 in other gold and silver payments over the last three months. Put together, that’s enough to buy nearly three ounces of real gold.

Zach is so convinced of his “instant gold” method that he’s willing to back it with a guarantee. There’s a free U.S. Gold Eagle in it for you. Click here for details of this unique offer.

The street chatter is about the IPO for Snap (SNAP), the parent company of Snapchat. The IPO price was $17. As we write, shares are trading above $25. Which goes to reaffirm our long-standing guidance that it’s the insiders who profit most from IPOs and you’re better off waiting a few weeks or months to jump in. That is, if it’s worth jumping in at all.

Elsewhere, crude has tumbled more than a buck, a barrel of West Texas Intermediate back below $53.

The quest for new-generation antibiotics isn’t getting any easier, says our Ray Blanco on the science-and-wealth beat.

The problem has been building for years: “Eventually, bacteria develop resistance to antibiotics, and even the best lifesavers of the past lose their effectiveness.

“When they do, formerly curable infections become unstoppable and deadly. New antibiotic development is part of a constant war against the bacterial world.

“Antibiotic drug development is expensive, however, and these drugs are only given for a short period of time, so the revenue opportunity is smaller than that for drugs treating other indications, like rare disease or cancer.

“Pharma companies, even the large ones, have limited resources to throw at new drug development. Therefore, they put their efforts into developing drugs with the greatest likelihood of success and the best opportunities for revenue creation.

“This means that we’ve had a drought in new antibiotics for many years,” Ray goes on.

“The death tolls from drug-resistant infections have been rising. In some places, antibiotic resistance is frighteningly high… and in a world where you can board a plane in New Delhi and be in New York in a day, resistant strains can spread across the globe in weeks.

“These reforms have been a boon to small antibiotic developers… but they are only any good if the drugs these companies are developing work.

“Sadly, we’ve seen some big setbacks for some of these small firms. In some cases, poor efficacy data mean they have to run new trials. In other cases, the FDA’s safety concerns have resulted in the regulator denying an application to market a new antibiotic until more data are forthcoming.”

That leaves only a few players remaining. Ray and his team continue to sort through them to identify the best of breed. Readers of Breakthrough Technology Alert and FDA Trader will learn about them first.

“Satire or truth?” a reader writes after our strong dollar-weak dollar musings earlier this week.

“Isn’t Truth measured by a standard? The dollar index (DXY) is a standard of faith in other people, their ability and faith to repay debt, and it’s only that faith and the promise of payment that keeps the ‘fake’ currency promise alive.

“Just because we are the best house in a bad neighborhood (thank you, Bretton Woods, uh… I mean Nixon, uh… I mean King Dollar, uh… I mean… ?) Oh, golly gee, I don’t know who to give the credit to. ‘Say WHAT? No more credit? What froze up? The hell you say!’ I guess that’s our hell to pay.’

“OK, before my diatribe goes any further, how about this: Every nation on the planet subtract their sovereign debt against every other country’s indebtedness owed to them simultaneously. That way, we could greatly reduce the total global debt. Yeah, I know, that solution is too simple. We don’t want to know who the global bums are, ’cause what if it’s us? I suppose I should be more worldly-reserved, like our dollar.

“Besides, that wouldn’t wield any power, make any money or (better) know who’s to blame for all this ‘New Cold (I mean Cash) War tension.

“Well, I guess my 5 Mins. are up. I just wanted to throw my two cents in. Hey, can somebody tell me if this is a penny or a nickel?? Inflation, deflation, who knows anymore? I guess I’m just old and tired. ‘Goodnight, Gracie!’”

“So Americans place the greatest confidence in the military, according to pollsters?” a reader writes after yesterday’s episode.

“What does the military do when confidence in politicians hits bottom? In many countries, the generals stage a coup and take control, usually promising ‘free’ elections when conditions are stabilized.

“This often happens after a crisis in the economy. Can’t happen here? Don’t bet on it.”

On a recurring topic, a reader writes: “On the off chance that a few of the Texas lawmakers who are pulling together a rescue plan for the Dallas Police and Fire Pension are readers of The 5, please suggest they simply convert a good portion of the fund into gold.

“I hear gold is legal in Texas, and ideally they could pay benefits in gold rather than in fiat — at the pensioner’s option, of course. I think they’ll be glad they did.

“Maybe give every pensioner an extra feral hog or two to make up the difference (although, apparently, all humans have antibodies to pork, so I don’t recommend eating it).”

The 5: It’s been many years since we wrote about the Teacher Retirement System of Texas. Back in 2009, its chief strategist, Shayne McGuire, opened an internally managed gold fund for the system’s 1.3 million public education employees.

“Consider the tremendous fiscal excess that major governments have made to prevent the world economy from collapsing,” he said back then. “I don’t think the question really is what is gold worth but what are currencies not worth.”

We see he’s still employed by the system and still talking up gold. “Since gold has low to negative correlations with traditional asset classes, most notably stocks, investors should consider the outlook for larger markets to arrive at their outlook for gold,” he told an interviewer last year.

P.S. Speaking of gold, have you heard about Trump’s “gold executive order”?

Jim Rickards says a draft will hit the president’s desk no later than two weeks from today — Thursday, March 16.

It’s a fast-moving situation. Jim has recorded a short (one minute, 34 seconds) video to bring you up to speed. We urge you to give it a look right now.