Uhh, About That Fed Rate Hike…

We love it when the establishment financial media can’t get their story straight.

“U.S. Stocks Open Lower as the Likelihood of Rate Hike Sets In,” says CNBC this morning.

What?! Wasn’t it only last Wednesday they were attributing a one-day 300-point ramp in the Dow to the Fed signaling an interest rate increase on March 15? As we recall, that was supposed to be good news because it signaled confidence in renewed economic growth. What changed?

On Thursday, Jim Rickards anticipated today’s headline when he wrote to readers of Rickards‘ Intelligence Triggers: A rate increase has nothing at all to do with economic strength. “The Fed is tightening into weakness (because they don’t see it), so they will stall the economy and will flip to ease by May.

“Under our scenario, the stock market is headed for a brick wall in April or May, when weak first-quarter data roll in.”

On the topic of “weak first-quarter data,” we’ve noticed an intriguing phenomenon in recent days.

On Feb. 1, we took note of a strong reading in the ISM manufacturing index. We also took pains to point out the ISM is a “sentiment” survey, not a concrete measurement of manufacturing health like factory orders. As February wore on, we also noticed a discrepancy between consumer sentiment and retail sales.

Suddenly, in the last week or so, the financial mainstream has lit up with articles about how all the “soft data” measuring how people feel look terrific… while all the “hard data” measuring real economic activity are still weak.

Well, you heard it here first. And now… something’s gotta give.

“Stocks are a bubble that will certainly crash, but the timing is uncertain,” Jim goes on.

“Recall that Fed chairman Alan Greenspan gave his ‘irrational exuberance’ speech in 1996, but stocks did not crash until 2000. That’s a long time to be on the sidelines.

“My view is we’re well into bubble territory, and stocks will reverse sooner rather than later. Any short positions should be in long-dated put options that give you time to ride out further irrational exuberance. For the most part, I’m sticking to my permanent portfolio of precious metals, land, art, private deals and cash.”

“One source of investor confusion,” Jim says, “is that the White House and Congress are moving toward fiscal stimulus, while the Fed is moving toward monetary tightening. That’s a highly unstable dynamic. Markets could tip either way.

“My view is the economy is fundamentally weak, the Fed is tightening into weakness and fiscal ‘stimulus’ will have limited effect. By later this year, the Fed will have to flip-flop to ease (via forward guidance) for the ninth time since 2013. Stocks will fall, while bonds and precious metals will rally.”

Reminder: On the same day as the Fed will raise rates — a week from Wednesday — the debt ceiling comes back into force.

It’s been suspended since October 2015… but the holiday is coming to an end. The White House and Congress will have to come to terms, sooner or later, on a deal to raise the debt ceiling.

Jim anticipates the final deal will look much like the Obama-Boehner agreement to raise the debt ceiling in 2011. That deal infamously prompted Standard & Poor’s to strip Uncle Sam of his cherished AAA credit rating. But more importantly, it pushed gold up 17% in the space of five weeks.

Could history repeat? Jim thinks it will… and he knows how to transform that modest increase in the bullion price into a massive gain with the potential to secure your retirement. Check out the case Jim makes in this brief video.

For a third consecutive trading day, the dollar is the only asset catching a bid.

China’s government just dialed down its 2017 target for GDP growth to 6.5%. Whether it can pull off that goal without devaluing the yuan remains to be seen…

As long as we’re poking fun at CNBC… behold a phenomenal “exclusive” it got last Thursday when Snap (SNAP), the “hot” company behind the Snapchat app, went public… 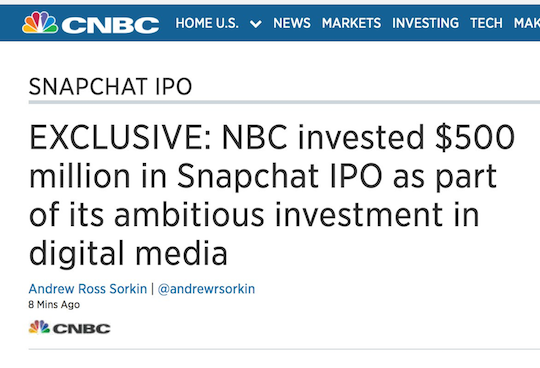 Yeah, we bet that one wore out the proverbial shoe leather. At least Andrew Ross Sorkin’s article was upfront about CNBC’s teensy conflict of interest in reporting the story. Not that it would be easy to conceal, heh.

Less honest with its readers was the Vox website, which also on the day of Snap’s IPO published an article with the headline, “The Case That Snap Really Is Worth $33 Billion.” Not disclosed is that NBC parent Comcast owns a chunk of Vox as well. And one of Vox Media’s other investors — the private equity firm General Atlantic — was an early investor in Snap. No disclosure there, either.

NBC, by the way, paid the IPO price of $17 per share. At no time since SNAP shares began trading last Thursday could you buy them for less than $24.

We bring all this up as a cautionary tale: Read stories about hot up-and-coming companies with as much skepticism as you can muster. Even if there aren’t conflicts of interest, there are always insiders who will get a better deal than you will.

As we said on Friday, IPOs are a terrible place to put your money on the first day, the first week and often the first few months. But now you know a little more about “how the sausage is made.”

The “scandal” of seven-figure charity salaries turns out to be a scandal of government subsidies.

Today’s Wall Street Journal has a front-page, above-the-fold exposé about 2,700 employees of charitable organizations who earn a million dollars a year or more. “While many of the big earners ran large enterprises,” it says, “others were leaders of small charities, such as a couple who run an online ministry.”

The Journal found an outraged former congressional aide to spew the expected outrage: “Who’s harmed by this is really who is supposed to benefit from the charities — the orphan, the refugee, the stray dog.”

But you had to read deeper into the story for the picture to come into clearer focus. Seventy-five percent of the charities that offered these seven-figure compensation packages were in health care. Another 10% were in higher education.

It was five years ago your editor learned what a lucrative gig a “nonprofit” hospital can be.

For the former Apogee Advisory, we were interviewing Dr. G. Keith Smith of the Surgery Center of Oklahoma — a pioneer in the practice of advertising prices upfront and not taking insurance. He told us about the scam called “uncompensated care.” You get a feel for how it works if you know a rough breakdown of who is treated in a typical hospital…

At the end of each year, many hospitals collect money from an “uncompensated care pool” — funded by federal and state taxes.

“That creates the perverse incentive for hospitals to issue fictitiously insane bills,” said Dr. Smith. “Let’s say they charge $100 for an aspirin for which they pay a penny. They collect $5 [from insurance], and claim they lost $95. That $95 goes into the ‘uncompensated care’ pool and helps them get this rebate at the end of the year.”

And they get to keep their not-for-profit status. Sweet deal!

Anyway, there’s some context for the Journal’s big exposé today…

“By my understanding, Congress makes the laws,” writes a reader on the topic of legalized marijuana.

“The law says marijuana is illegal. The attorney general’s job is to execute the laws that Congress makes.

“Sure seems backward to me! I expect if it were the other way around and they wanted the law and the attorney general didn’t enforce it, they’d have him up for contempt of Congress or something else!

“Notice the wording in the Cole Memo,” a reader writes on the same topic. “The federal government will allow states to regulate and tax marijuana.

“My state is allowing medical marijuana, but it will be taxed at 50% more than the regular sales tax — even though prescription medications have no sales tax applied to them. So much for that.”

The 5: Yeah, they know a revenue source when they see it.

Which is worse? An industry that’s illegal or one that’s legal but under the thumb of tax collectors and regulators? Sorry, a legal one allowed to operate unfettered is not an option. We still like the profit possibilities from penny pot stocks regardless.

“I rely on you guys to keep me abreast of free speech issues, and I would be very interested to read your take on net neutrality.

“I thought I was for it, as a counterweight to Comcast et al., but I gather that a recent court decision has effectively given the FCC the right to censor the internet under the net neutrality guise.

“Thanks for always being honest and independent in your thinking.”

The 5: The reader is referring to Obama-era federal regulations that order internet service providers to treat all internet traffic the same. At the risk of way oversimplifying the issue, here goes…

Defenders of these regulations couch their arguments in the notion that the likes of Comcast and Charter are keen to exercise censorship of nonmainstream ideas — if not now, then in the future.

The reality is that net neutrality regulations are an effective subsidy paid by websites that use comparatively little bandwidth, paid to the biggest consumers of internet bandwidth — especially Netflix.

It looks as if the Trump-era Federal Communications Commission will revisit net neutrality, and soon.

Meanwhile… We’re financial publishers; please don’t rely exclusively on us to stay on top of all the government’s depredations.

We say that knowing these are perilous times. The mainstream spent so long giving Bush and Obama a free pass that it might try to “speak truth to power with Trump,” but it has no authority to do so. The “InfoTrump” alternative media are equally useless in their own way.

While we don’t have legions of lawyers suing the feds for documents all day… or legions of reporters poring over those documents for dirt… we do have a project in its formative stages that aims to fill a critical informational void. More to come…

P.S. OK, we can’t totally slam CNBC today. The network did, after all, give our David Stockman a platform to offer Wall Street a sorely needed reality check. The White House and Congress, he said, aren’t remotely on the same page.

“Wall Street is totally misreading Washington,” he said, with the experience of knowing both of them inside-out. “It’s pricing in a fantasy about a Trump stimulus that simply isn’t going to happen. There will be no tax cut.”

You can watch the full interview here. Later this week, David will reveal something about the coming meltdown in Washington that he’ll share only with us. Stay tuned…