The Fed Just Fouled Up (Literally Moments Ago)

Now here’s some courageous, no-holds-barred journalism for you… 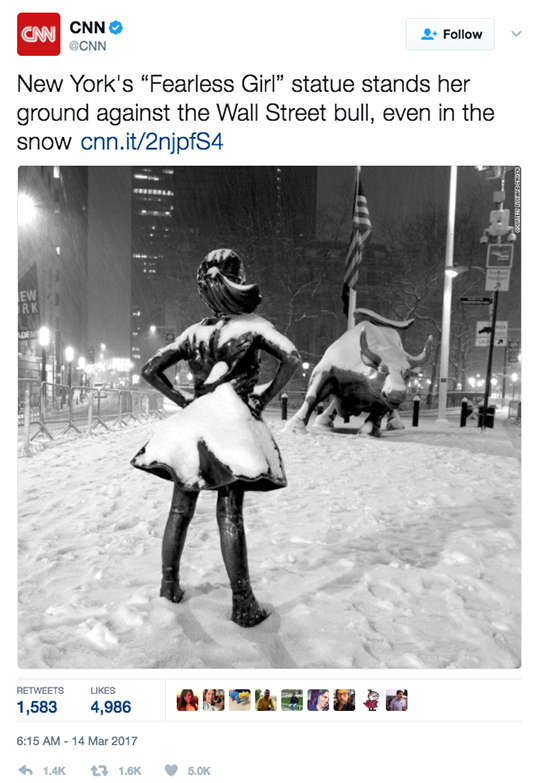 Heh. As one wag replied, “Yes. Because it’s a statue.”

At least CNN didn’t deploy the “Blizzardmobile” with which it humiliated itself a couple of years ago. Oh, heck, just for old times’ sake… 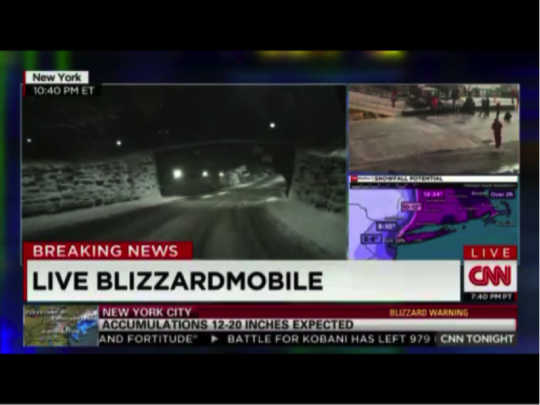 And so the blizzard of the century was as big a bust as Trump’s 2005 tax returns… but now the real storm for Wall Street approaches.

The day has arrived. If market-shaking news comes in threes, it will be happening quickly today…

On the topic of the debt ceiling… the Daily Treasury Statement informs us that Uncle Sam’s cash on hand has grown from $30 billion as of Friday to $44 billion as of Monday.

That’s a nice improvement, but the balance is still only one-tenth of what it was around Election Day — before anti-Trump career bureaucrats at the Treasury started spending down that cash hoard to precipitate a crisis.

But a knock-down, drag-out debt ceiling showdown is still weeks away. This afternoon, we have the Federal Reserve, triggering a surefire chart pattern that signals trouble ahead for the markets.

As usual, the Fed will issue its once-every-six-weeks policy statement around the time we go to virtual press. Nearly everyone expects the Fed to boost its benchmark fed funds rate another quarter-percentage point.

So the “drama” is centered on other questions. Will the Fed shift its outlook toward four rate increases this year, instead of three? Will Janet Yellen say anything at her news conference about shrinking the Fed’s bloated balance sheet?

As we write this morning, we don’t yet know the answers. But to a considerable extent, the answers don’t matter: Some sort of market stumble is already baked into the cake.

That brings us back to the adage “three steps and a stumble.” As a reminder, the Fed began a cycle of interest rate increases in December 2015. That first increase was followed by a second in December 2016. The third comes today.

Going back seven decades, the Fed inevitably brings on some sort of stock market chaos for several weeks following a third consecutive interest rate increase. It might not occur today or tomorrow, but occur it will. It’s as certain as the sunrise, as David Stockman has been saying in this space for several days now.

Last week, David told us about the spooky parallels between the peak of the dot-com bubble in 2000 and the atmosphere on Wall Street now — right down to a preposterous valuation for a company that has far more eyeballs than revenue, Snap Inc.

Reality is already setting in: SNAP’s close yesterday was the lowest since going public 12 days ago.

But don’t take it from us. Take it from one of the few mainstream economists who accurately called both the dot-com collapse and the Panic of 2008.

Nobel Prize winner Robert Shiller recalls the “new era” back in 2000, when clicks and eyeballs rendered mundane things like earnings and revenue irrelevant. He sees the same thing now with Wall Street’s widespread expectation that Donald Trump will be the second coming of Ronald Reagan.

“They’re both revolutionary eras,” Shiller tells Bloomberg News. “This time, a ‘Great Leader’ has appeared. The idea is everything is different.”

But it’s not different. Indeed, David Stockman believes the epic bull market that began its run on March 9, 2009, comes to an end today.

“Everything is set to change because the endless spree of monetary and fiscal stimulus is over,” he says. “Taken together, the Fed’s interest rate hike, the end of the debt ceiling holiday and the Trump budget to be presented by the Trump White House on Thursday signal that the day of reckoning has finally arrived.”

We’ll get more into Trump’s budget and what it means in the weeks ahead. But in the meantime, you want to position yourself for the fallout from the Fed’s decision this afternoon. Many people are liable to be blindsided — just as they were in the spring of 2000.

But you don’t have to be one of them. In fact, you can pounce on the coming market chaos to turn a $1,000 investment into $29,390 well before year-end. Even as this episode of The 5 hits your inbox and Janet Yellen is yapping with reporters, it’s not too late to act. But for maximum profit potential, it pays to act posthaste. Forget what Yellen’s saying and tune into this short video message from David right now.

Markets everywhere are marking time until the Fed decision. As we write, the major U.S. stock indexes are slightly in the green; gold is holding onto the $1,200 level just barely.

Meanwhile, a veritable flood of economic numbers is coming in, with inflation leading the way…

As always with the inflation numbers, we caution that any resemblance to your own cost of living is purely coincidental. Shadow Government Statistics measures inflation using the same methodology as the feds did during the Carter administration. It comes up with a real-world inflation rate of 10.5% — also the highest in five years.

Crude has found a floor for the moment at $48.47 a barrel — an interesting development that coincides with the president’s meeting yesterday with Prince Mohammad, the 31-year-old power behind the throne in Saudi Arabia… 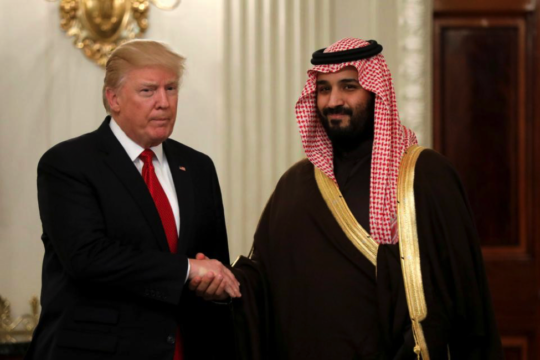 Crude tumbled again yesterday because of fears that Saudi Arabia was waffling on its commitment to cut production. Meanwhile, details from the Trump-Mohammad meeting are scant… but the Saudi Arabian government hailed a “historic turning point” after a having lukewarm relationship with the Obama White House.

Gee, a year ago Trump was suggesting he might cut off American purchases of Saudi Arabian oil unless the kingdom ponied up more to fight ISIS. “If Saudi Arabia was without the cloak of American protection,” he told The New York Times, “I don’t think it would be around.”

Guess the Deep State got to him on this one too. Thing is, with crude back below $50, Saudi Arabia’s foreign exchange reserves are sure to accelerate their continued depletion. Might the kingdom accelerate dumping its $103 billion in U.S. Treasuries as well?

Gee, we nearly forgot about the Dutch election. Fact is, we don’t have much to say about it… although we notice a tangential connection with some curious hacking of Twitter accounts overnight… 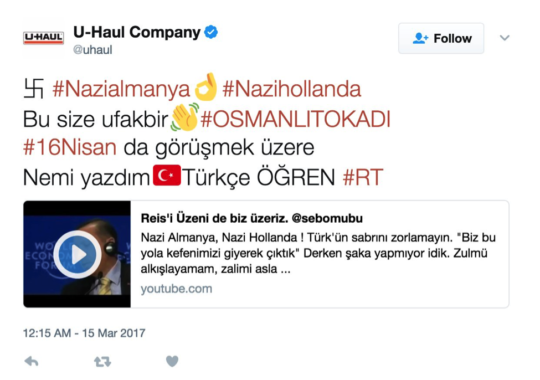 The NHL Network, the Atlanta Police Department and KFC’s South African division also got hit with swastikas and Turkish text.

The leading party in the opinion polls going into today’s Dutch election is the Freedom Party led by Geert Wilders, who’s run on an anti-immigration platform. Meanwhile, last weekend, Turkey’s foreign minister wanted to go to Rotterdam to lead a rally of Turkish expats in advance of a constitutional referendum in Turkey… but the Dutch government put the kibosh on that, thinking it was too provocative in advance of Holland’s own elections. Turkey’s prime minister denounced Holland as being full of “Nazi remnants.”

Why Turkish hackers chose to take out their frustrations on U-Haul and the NHL Network, we have no idea…

On the topic of small business having trouble finding qualified personnel, a reader writes, “My employer is of the belief that bringing in temps through Manpower is the best way to operate a business.

“It’s not. The majority of people we bring in come with expectations of being hired permanently. Not happening. The majority are poor to very poor performers. The few people who perform well don’t last because they can’t work for the low wages offered through Manpower. Hard to see good quality when quality people aren’t hired in.”

Now for a real-world cost-of-living dispatch: “Hi, guys — just thought I’d drop you a line about recent cost increases in my favorite meals and snacks here in Anchorage, Alaska.

“My favorite lunch is to go downstairs to the building’s coffee shop and get a bowl of soup. The price is the same, but starting a few days ago, the quantity dropped by about half an inch as measured from the top of the paper ‘bowl’ in which the soup is served. This results in less product for the same cost.

“Simultaneously, the vending machines tagged on an extra quarter to my favorite drink (XINGtea) and my favorite afternoon snack (trail mix). Those would be 10% and 25% price increases, respectively. Are we getting near the range of hyperinflation or just plain-old high inflation?”

“Here’s a thought,” writes a reader on the eve of the president’s first detailed budget blueprint.

“Have President Trump personally submit a balanced budget for next year with the included provision that if the Congress goes over the said balance, 5% of the extra cost comes out of their salaries, starting with the U.S. Senate, until it goes to zero. Then after that, they expand to the U.S. congressional people, then to the Senate aides, then to the congressional aides. You get the idea.

“If they complain to the president, then let them either work for nothing or resign their cushy jobs.”

The 5: If memory serves, both the Everly Brothers and Aerosmith did songs about your proposal…

[We’ll let you think on that one…]

“I listened to David Stockman’s video, one of the latest ticklers you guys all the time throw our way,” writes our final correspondent.

“I have a simple question that I hope you or Mr. Stockman can answer before I consider joining. Is what he is talking about in entering a trade knowing or suspecting that a stock is going to tumble — does this have to do with options? He says in his video that it is not ‘shorting’ a particular stock.

“I don’t have an options trading account — hence my question.”

The 5: To make the most of David’s guidance in Bubble Finance Trader, yes, you’ll want an options trading account.

It’s not as complicated as you might think, and new subscribers get a comprehensive suite of reports with plain-English descriptions of how you can get started. Hope that helps…

P.S. As we hit the “send” button, the Fed has unleashed the very chart pattern David Stockman’s been warning about.

It’s still not too late to act — inevitably, there’s short-term noise in the markets as traders parse every clause within a Fed policy statement. But after they’ve had a chance to sleep on it tonight, the wild ride could easily begin tomorrow. This is your final chance to watch David’s video; we’re taking it down later tonight, as it will be out of date.