The NEXT Secret Global Monetary Plan

As we write this morning, the media are once again looking for news in all the wrong places. German Chancellor Angela Merkel is at the White House meeting with President Trump. How, reporters wonder breathlessly, will they get along after Trump once tweeted that Merkel is “ruining” Germany? 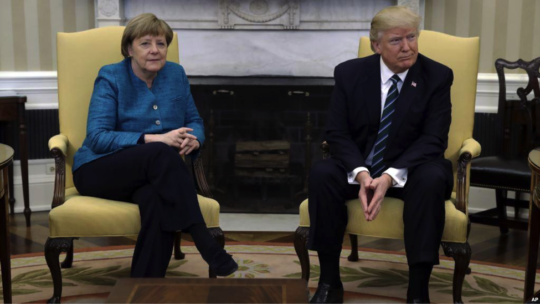 Unlike the last Republican president, this one probably won’t administer a shoulder rub today…

But here at The 5, we’re far more interested in another meeting taking place today — ironically, in Germany. Jim Rickards suspects a secret world monetary plan is being hatched there right now.

For the essential context, Jim rewinds just over a year…

“Just over a year ago, from Jan. 1 to Feb. 10, 2016, U.S. stock markets fell over 10%,” Jim reminds us. “It was a sickening plunge that caused panic at the Fed. The Fed was trying to tighten monetary policy and raise interest rates, as they had announced in December 2015. Suddenly, markets were plunging and the Fed had to find some way to ease monetary conditions to save the system.

“What resulted was the ‘Shanghai Accord,’ cooked up in secret at a G-20 finance ministers’ and central bankers’ conclave in Shanghai, China, on Feb. 26, 2016. The Shanghai Accord called for a weaker dollar and a stronger yen and euro. The U.S.-China currency peg would be left unchanged. Europe and Japan had to bear the burden of U.S. ease.

“It worked! From February to June 2016, the dollar weakened, the yen and euro strengthened and the U.S. stock market recovered its losses. The Shanghai Accord ended when the June 23, 2016, Brexit shock forced the dollar higher again, but by then it was ‘mission accomplished’ for the G-20.”

Fast-forward back to today: G-20 finance ministers are meeting again in Baden-Baden, Germany… and the stakes are far higher this time.

At the end of January, we noted that Trump’s trade adviser Peter Navarro accused Germany of seizing on a “grossly overvalued” euro to “exploit” the United States.

Navarro’s kept up this criticism in the weeks since. A few days ago, he called the $65 billion U.S. trade deficit with Germany “one of the most difficult” trade issues.

For his part, Germany’s Finance Minister Wolfgang Schäuble isn’t sure what the heck Navarro’s talking about. Germany has a trade surplus with America, Schäuble says, because German companies make goods Americans want to buy. “Nobody can claim that we are achieving these surpluses through [currency] manipulation.” 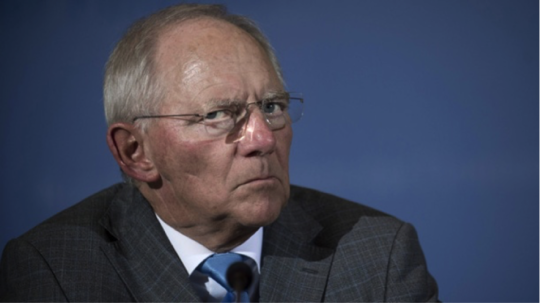 Schäuble thought bubble: “What is this Navarro dude smoking?”

Schäuble has a point: The European Central Bank is in charge of the currency for the entire 19-nation eurozone, although the Germans do have considerable sway over its governance.

When top advisers to world leaders start throwing shade at each other like this, bad things usually follow.

So while Trump and Merkel mug for the cameras in Washington, the real decisions are being made at that G-20 gathering in Baden-Baden. “It looks like a new secret plan may be in the works,” Jim Rickards says.

“The major trading powers are willing to let each other slug it out in the currency wars in order to avoid something worse — trade wars.”

That is, the finance ministers might agree to a new round of “competitive devaluations” — the proverbial race to the bottom as everyone tries to undercut everyone else. Better that than nation-states throwing up a bunch of new trade barriers like in the early 1930s — which was one of the things that made the Great Depression so great.

“We’ll be watching closely,” Jim says, “for signs of a new secret world monetary plan, and we’ll keep you informed on what it means for exchange rates, interest rates and potential tariffs.”

[Ed. note: Far from the globe’s power centers, Jim says a tiny gold miner trading for only $9 a share is about to unleash $638.1 million worth of ultra-rare gold. We’re talking about gold so rich, so valuable, that it’s 15 times the concentration of the average gold mine.

Jim believes mining history is about to repeat, with the potential for a historic 5,379% gain. And it could start as soon as this coming Monday. Check out Jim’s urgent gold message right here.]

The stock market is quiet thus far on this Friday — even though it’s a “quadruple witching” day.

It’s expiration day for stock options, index options, stock futures and index futures; it occurs four trading days each year. It can be the occasion for weirdness and volatility, but not today: The major U.S. stock indexes are in the red as we write, but no more than a quarter percent.

The big economic number of the day is industrial production. It was flat during February, but that’s partly a function of mild weather depressing utility demand. The manufacturing portion of this figure, on the other hand, jumped 0.5%; maybe the “hard data” are starting to catch up to the “soft data” indicating optimism in the factory sector.

On the other hand, the capacity utilization figure shows 75.4% of the nation’s industrial capacity was in use during February. That’s still lousy, even by the standard of the last five years… 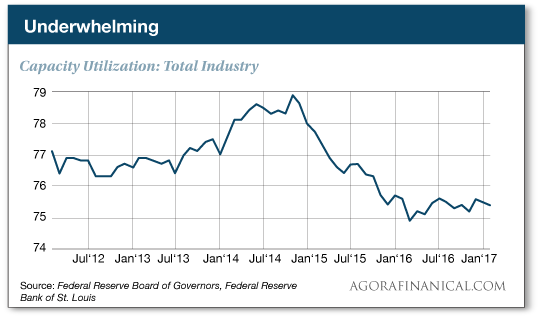 Ponder the irony: The day after the debt ceiling comes back into force, the Trump administration issues a budget blueprint that does nothing to shrink federal spending.

The helpful website called U.S. Government Spending informs us that federal, state and local spending combined will exceed $7 trillion this year. That compares with $3.2 trillion at the start of the century. If you adjust for inflation, the starting point is still $4.5 trillion.

Meanwhile, the U.S. population has grown from roughly 281 million to 324 million, “so even after adjusting for inflation,” writes Matt Welch at Reason, “government spending has grown more than three times as fast as Census numbers.”

Trump’s budget team couldn’t even bring itself to kill the Export-Import Bank.

The Ex-Im Bank is an outrageous exercise in corporate welfare, subsidizing foreign buyers of American-made goods; critics rightly call it the “Bank of Boeing.” On the campaign trail, Trump promised to kill it.

Yeah, not so much: Ex-Im survives in the White House budget plan. Tim Carney of the Washington Examiner, one of the capital’s most fearless reporters exposing the nexus between Big Government and Big Business, says the change of heart “follows many reports from congressional fans of Ex-Im that Trump had been persuaded to love the agency.”

Heh… Obama pilloried Ex-Im when he was a candidate too.

We neglected to mention the addition of yet another Goldman Sachs alum to the Trump economic team this week.

Jim Donovan will be deputy treasury secretary under Steve Mnuchin — himself a Goldman product. That’s in addition to National Economic Council Director Gary Cohn and others, including Steve Bannon.

The story as reported by Politico included a quotation of praise from a Goldman spokesman. “Jim is smart, extraordinarily versatile and as hardworking as they come,” said Jake Siewert.

Mr. Siewert was Bill Clinton’s last press secretary. And under the Obama administration, he was an adviser to Treasury Secretary Timothy “TurboTax Timmy” Geithner.

Yeah, how’s that swampy-drainy stuff workin’ out fer ya?

“One would think the feds had better things to focus on,” begins today’s mailbag. “Then again, we know better.”

The reader points us to a story from Gainesville, Georgia, radio station WDUN — informing us the city of 35,000 is at risk of losing its federal transportation funding because of this… 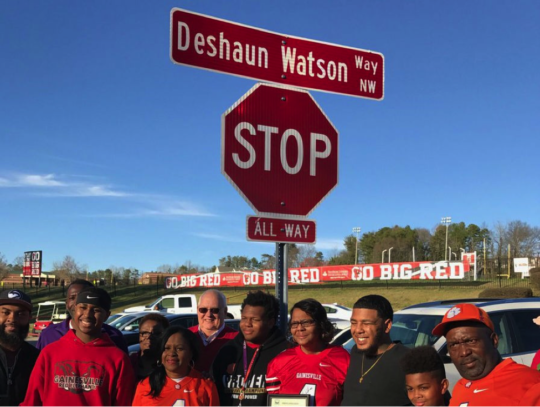 It’s a federal offense! [Photo from the office of U.S. Rep. Doug Collins]

It’s one of those honorary street signs — in this case honoring native son Deshaun Watson, quarterback for Clemson’s national championship football team. The sign is red, in a tip of the hat to the high school team’s colors.

The 5: Golly, and we thought Steve Bannon was going to “deconstruct the administrative state.”

But it’s nothing new, we assure you. Over the last decade, the already-green street signs near Agora Financial headquarters in Baltimore have been steadily replaced. The perfectly functional old signs were in all caps, and had to make way for new signs in a compliant typeface — indeed, the same one in Gainesville’s red sign, above.

You’d think all other problems in Baltimore had been solved…

“On Tuesday,” a reader writes, “you promoted a financial disaster that was to occur at 2 p.m. Wednesday.

“No disaster Wednesday, and no mention of your prediction Thursday.

“This happens over and over. How often do you expect us to buy the BS from Stockman and Rickards? Unsubscribing now.”

The 5: Hmmm… What was it we said in our Wednesday episode?

Oh, yes: “Going back seven decades, the Fed inevitably brings on some sort of stock market chaos for several weeks following a third consecutive interest rate increase. It might not occur today or tomorrow, but occur it will. It’s as certain as the sunrise, as David Stockman has been saying in this space for several days now.”

“I’m pretty much a conservative libertarian, and for pot legalization. I don’t smoke the weed at all (not since the ’70s),” writes a reader reacting to our latest take on federal enforcement and penny pot stocks.

“I heard Attorney General Jeff Sessions interviewed on Laura Ingraham’s show yesterday. A little disconcerting when he mentioned his concern about a ‘nationwide’ problem with marijuana, ‘like heroin,’ that’s a major problem with young people.

“Glad he will have bigger fish to fry with other issues and hope he will honor states’ rights.”

The 5: Sessions is a fair-weather federalist, like all the rest — paying lip service to the 10th Amendment right up until it offends their hobbyhorse issues. Then they loves ’em their Big Government.

But yes, as we’ve said all along, the feds’ resources aren’t unlimited and Sessions has to decide where to direct them. It won’t be toward marijuana.

“Your letter yesterday from a reader describes lowering the salaries of the employees in the federal government as if that would lower inflation in D.C.

“The real problem with D.C. and why there are so many fancy restaurants and bars is because of the expense accounts of the lobbyists in the town that is infested with them!

“If you think the federal employees are picking up the big tabs in that city, you are crazy. That is why draining the swamp is the only solution, and sadly one that may never be possible.”

It’s so rich… so valuable… that a single deposit of it could soon be worth $69 billion or more.

The best part? You can claim a share of the profits for as little as $9.

But Jim says it’s best if you act no later than Monday… for reasons he explains when you click here.