One of Investing’s Most Dangerous Words

Well, well: Today might be the day the Dow industrials and the S&P 500 break a historic streak.

Going into this morning, the two indexes have gone 109 trading days — back to Oct. 11 last year — without a one-day drop of 1% or more. There’ve been longer streaks, but you could them on two hands.

No, there’s no obvious reason. CNBC is reaching for uncertainty over the Obamacare repeal vote tomorrow and jitters about OPEC’s commitment to keep a cap on oil production.

But those are old stories. For all we know, it’s traders’ nagging suspicion that all the FBI manpower expended to find Tom Brady’s Super Bowl jersey could’ve been better used to, you know, stop the next terrorist attack.

Maybe, just maybe, the explanation is as simple as this: The market’s due for a rest. But that doesn’t make for an exciting headline, does it?

Even with today’s drop, the S&P is a mere 1.75% off its all-time high reached on March 1. But headlines that say “S&P Still Near All-Time High” aren’t very exciting either.

Besides, you could write that headline about half the time. Seriously.

“Research we did a few years back,” says Jonas Elmerraji of our trading desk, “showed that if we dig into numbers from 1950–2013, the S&P 500 spent nearly half its trading sessions either at all-time highs or within just 5% of them.

“In that six-decade stretch, there were booms and busts with huge trends literally all the time. But the bottom line is that making new all-time highs is very normal territory for the stock market.”

That’s important to recognize at a time like now. There’s no shortage of reasons the market should head into an imminent 10% or better correction. We document them regularly: Steep valuations, an overconfident Federal Reserve, unfounded optimism that Congress will move quickly to enact the Trump agenda…

Here’s the problem with expecting an imminent stock market correction: A lot of people are betting on it right now.

The present moment is nothing like that. “This market isn’t rallying because people are in love with stocks,” says Jonas — “it’s rallying in spite of the fact that they don’t love stocks.”

For evidence, Jonas directs us to the autofill feature when you search on Google News. The suggestions are the product of Google algorithms processing both the available content on the web… and how often other people are searching for a given term. 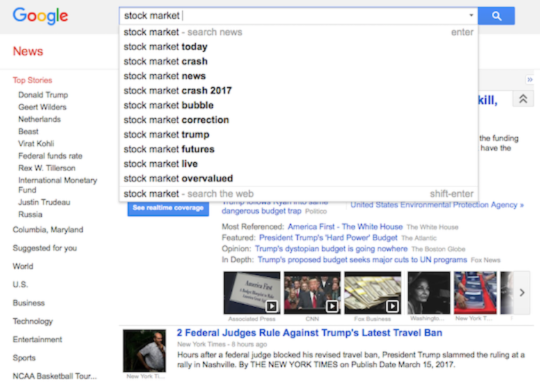 “Half of the suggested autocomplete terms were about corrections or crashes in the market,” says Jonas. “Not a single one was bullish.”

“We’ve actually been experiencing a stock market correction for the last month or so,” Jonas is quick to point out.

“No, the S&P 500 hasn’t plummeted, but it has traded sideways for the last four weeks.

“People often forget that corrections can come in two different forms: price and time. This is a time correction for the S&P 500. When you zoom into what’s happening beneath the surface, that correction becomes a bit more obvious — a full 40% of the stocks in the S&P 500 are down since Feb. 21. It’s a correction.

“But a correction isn’t a crash. The trend in the broad market is still up and to the right.”

And what’s the strongest performer year to date among the stock market’s major sectors? It’s up 17% as the first quarter draws to a close…

No, it’s not technology — although Apple, Cisco and Facebook are certainly doing well.

“As the post-election rally matures,” writes Greg Guenthner in today’s Rude Awakening, “homebuilders have quietly become some of the strongest stocks on the market.

“This homebuilder rally is no dead cat bounce. We’re seeing several positive catalysts beginning to converge that will help power these stocks higher in the weeks and months ahead.”

Begin with sentiment: As we mentioned last week, homebuilder sentiment as measured by the National Association of Home Builders is now its highest since June 2005. 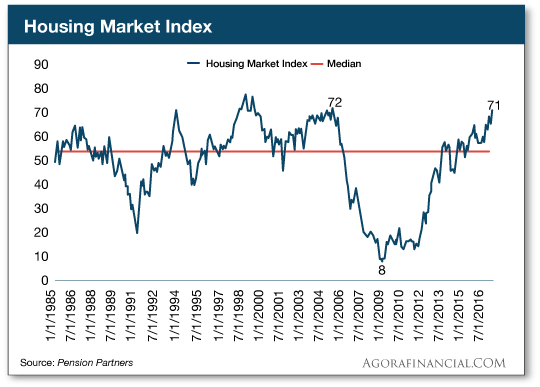 Look, we get it: Housing should (there’s that word again) be headed into another slump as interest rates climb.

But as we said last month, the fallout from the Panic of 2008 was so pervasive and long-lasting that now there’s only 3½ months of housing inventory for sale; anything less than five months is a “tight” market.

Homebuilding just plain stopped in much of the country when the financial system locked up in late 2008. The recovery has proceeded at a glacial pace; even now, housing starts are only two-thirds of their average over the last 50 years.

It’s a seller’s market, and it might become more of a seller’s market despite interest rates. “Rising rates are beginning to push potential buyers off the sidelines in many markets,” says Greg. “With the specter of a larger monthly payment looming, buyers are motivated to get off the couch and lock in their rate.

“It’s time for a monster rally after 10 years of little to no substantial gains from the homebuilder stocks.”

Hot money flooding out of stocks is flooding into both bonds and gold.

Apple touched a new all-time high this morning after announcing a new budget iPad — a 9.7-inch model for only $329. (Not that you can put it in a carry-on if you’re flying home from 10 airports in the Middle East, but that’s another story.)

With the broad market pulling back, AAPL is still flat on the day — sporting a 1.63% dividend that’s sure to rise over time; it remains a favorite of Lifetime Income Report editor Zach Scheidt.

[Ed. note: Have you claimed your free copy of Zach’s new book yet? It’s packed with 47 tips and tricks to boost your investment income — including a way to grow your Social Security benefits by up to $570 a month.

We have only a limited number of Zach Scheidt’s Big Book of Income to give away — we ration them to 450 a day. But if it’s still available, it’s yours free — as long as you can spot us the $4.95 shipping and handling. Claim your copy right now and we’ll ship it to your door.]

The outlines of a new “Shanghai accord” are coming into view, says Jim Rickards.

The old Shanghai accord, you might recall, was a secret deal Jim says was cut in February 2016 on the sidelines of a G-20 meeting in Shanghai.

Under its terms, the dollar and Chinese yuan would weaken against the euro and Japanese yen. The objective was to give Chinese leaders some breathing room to weaken their currency without a formal devaluation, which would throw global markets into turmoil. It worked just as intended for four months, with global markets stabilizing.

Rewind to last week: Bloomberg had a story about how the Federal Reserve’s interest rate increase last Wednesday was followed immediately by the Chinese raising some lending rates on Thursday and the Japanese declaring they’d make no changes in policy. All was calm in the markets.

That wasn’t coincidence, Bloomberg said — it was coordinated.

“The mainstream media now agree with our analysis from a year ago,” Jim goes on: “G-20 meetings are used to arrive at understandings on exchange rates and to agree on ways to manipulate markets to achieve those understandings.

“The evidence is everywhere. The new understanding involves the ‘G-4’ of China, U.S., Japan and Europe agreeing to tighten policy, or at least maintain currency policy all at the same time. These announcements were made within a matter of hours or days of each other.

“This coordination on timing is important. If one country tightens policy and others do nothing, markets may punish the first mover by making its currency uncomfortably strong. But if all parties move at about the same time, markets will see no reason to favor one currency over another, because their relative positions on interest rates will be mostly unchanged. This shows how much manipulation of interest rates, exchange rates and asset values really goes on behind the scenes.”

It doesn’t last forever; the Shanghai Accord came to an end last year when the “Brexit” referendum in Britain threw markets into a cocked hat. But along with everything else we’ve cited in today’s episode of The 5, it’s one more sign of a steady-as-she-goes environment — at least for the time being.

“The 3:55 objection was priceless!” writes the first of several readers reacting to yesterday’s mailbag. “Surely, this guy was just teeing one up for you. ‘Who’s Who’ — thanks for the chuckle.”

“My favorite thing about Trump from the beginning,” writes a third, “has been the apoplectic response he triggers from those who think so highly of themselves like Mr. ‘Who’s Who in the World’!

“These are the types of pointy-headed intellectuals who have driven our country into bankruptcy and into one war after another without ever learning from their mistakes.

“One only has to look at the forecast by the pointiest of heads at the Fed or the IMF to see how consistently wrong they have been about almost every forecast made and how they have completely missed major economic events.

“Housing crisis? ‘The impact on the broader economy and financial markets of the problems in the subprime market seems likely to be contained.’ Great job, Ben Bernanke.

“‘By 2005 or so, it will become clear that the internet’s impact on the economy has been no greater than the fax machine’s.’ Nice one, Paul Krugman. Real genius!

“The arrogance of these fools is disgusting!”

“Talk about an ideological hack!” says a fourth. “Somewhere between hating your ad and butt kissing the worst president ever and his ridiculous transfer of wealth, er, health care plan, I got mad.

“He must have a union job or be in one of the myriad large enterprises that were able to buy their way out of Obamacare. As a small-business guy, I have to live with this crap. Premiums up well over 40%. Coverage just horrible, with high deductibles, fewer choices and doctors leaving the trade as if scared of the plague…get real, buddy, and get a clue.

“Look, Trump is no savior, you are right, but the last guy in the office was the devil incarnate! Anyone who thinks a president or Congress is going to ‘change the world,’ at least in a positive way, is living a dream and ignoring thousands of years of history.

“The following,” writes our final correspondent, “was in your Saturday ‘One More Thing’ feature, but there was no link…

“So how are we to try it? It is not a listed product on their website.”

The 5: That’s because the product is so new. Sorry for the oversight. Here’s the link.

P.S. If you’re wondering what it is that got “Mr. Who’s Who” all worked up yesterday, here’s one more look.