They call themselves “American medical refugees.”

They’re people like the Boninfante family from Chester County, Pennsylvania. Well, that’s where they used to hail from. In 2015, they picked up stakes and headed to Longmont, Colorado. Sara and Nicky Boninfante’s 13-year-old son Blake suffers from “uncontrolled myoclonic epilepsy.” The seizures last only a second or two… but they can happen hundreds of times a day.

In Colorado, Blake can undergo treatment with CBD oil — derived from the cannabis plant. Not so in Pennsylvania. Last year the Keystone State legalized medical marijuana, but the measure won’t take effect till next year.

Blake’s family couldn’t afford to wait. Between the cannabis treatments, anti-seizure meds and a special diet, “his seizures are now reduced 75% during the school day — knock on wood,” says mom Sara.

In England, the family of Deryn Blackwell didn’t have time to uproot themselves for the sake of following the law. He had only three days to live.

For four years — since the age of 10 — Deryn had fought leukemia and a condition called Langerhans cell sarcoma.

With the help of four bone marrow transplants, he managed to kick the cancer — though not without complications. And after the fourth transplant he developed an infection. It was so bad the doctors told his parents he had as little as three days to live.

He went into hospice at 14. The pain was excruciating, despite huge doses of fentanyl, the strongest opiate painkiller available. There had to be something better, his parents thought.

So they went out and scored some pot — a highly illegal act in Great Britain.

With the help of an online recipe, they figured out how to turn it into liquid form.

“The effects of it blew my mind,” Deryn’s mom, Callie, tells the British TV show This Morning. “It wasn’t what I expected.”

First, the anxiety Deryn felt over his impending death faded away. Then he began to recover physically. After five days he was not only still alive, but his white blood cell count was coming back — something doctors thought impossible.

Did cannabis make the difference? We don’t know and probably never will. Mom Callie doesn’t endorse it as a cure-all… but she has no regrets about the choice she made.

Meanwhile, on a different cannabis-related topic, the experts’ doubts are fading…

On a day President Trump is convening a new panel to tackle the opioid painkiller crisis… a study finds lower rates of opioid abuse in states where medical marijuana is legal.

The study, published in the journal Drug and Alcohol Dependence, also found no uptick in cannabis-related hospitalizations.

That’s five studies now, reaching similar conclusions. We cited one of them earlier this month, from an employer-benefits provider that found the percentage of patients abusing their opioid prescriptions plunges by half in states where medical marijuana is legal.

As for penny pot stocks, “Buyers are clearly back in control as we finish off March,” says our Ray Blanco.

“That bodes well for a return to momentum trading to pull us higher in the weeks ahead.” It’s already looking good for readers of Ray’s premium advisory Penny Pot Profits. His two newest recommendations are up about 16%… and he’s holding out for more.

These early results are affirmation of the wisdom behind the proprietary trading system Ray has developed for penny pot stocks. As 2016 turned to 2017, Ray and his team discovered the “secret logic” behind extreme moves in penny pot stocks. We’re talking the potential for gains of up to 1,810%… without waiting years for it to happen.

As you might be aware, we’ve been extending a unique deal to new subscribers of Penny Pot Profits. But that deal comes off the table at midnight tonight. If you want to act, now’s the time.

Markets are largely quiet as the middle of hump day approaches, U.S. traders unfazed by British Prime Minister Theresa May putting the “Brexit” wheels in motion.

At last check, the Dow has given up about 40 points of the 150 it gained yesterday. Gold is steady-Eddie in the low $1,250s. Bonds are rallying, the yield on a 10-year Treasury now 2.38%. Crude is back above $49 after the weekly inventory report from the Energy Department.

Aside from Brexit, the trader chatter is about Westinghouse Electric filing for Chapter 11 bankruptcy. These days, Westinghouse is a subsidiary of the Japanese conglomerate Toshiba, focused on nuclear power. Toshiba is staring down a $6 billion write-off.

Russia’s “de-dollarization” plans are proceeding apace… and the Russkies might bring along the rest of the developing world with them.

The governor of Russia’s central bank, Elvira Nabiullina, is drawing up plans just in case the country is kicked out of the SWIFT global payments system.

“Both Iran and North Korea have been ‘de-swifted,’ or kicked out of the SWIFT message traffic system. From a financial perspective, this is like cutting off oxygen to a patient in the intensive care unit. Russia understands its vulnerability to U.S. domination and wants to reduce that vulnerability.”

Nabiullina has created a workaround. “We updated our transaction system,” she recently told President Vladimir Putin, “and if anything happens, all SWIFT-format operations will continue to work. We created an analogous system.” 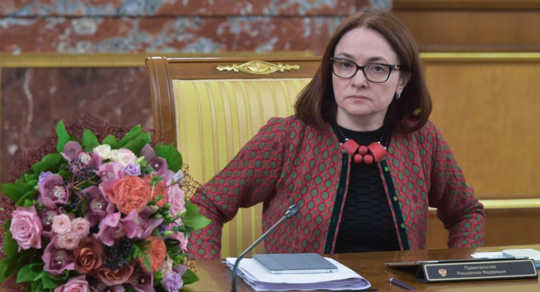 Ready for anything: Elvira Nabiullina

Understandably, Russian state media are thin on details. But it’s an eye-opener, no?

In early 2009, Jim was invited to the Pentagon to take part in the government’s first-ever “financial war game.” During that exercise, the Russians and Chinese teamed up on a new gold-backed currency that muscled aside the U.S. dollar as the globe’s main reserve currency.

Now, according to the Russia Insider website, “Recent progress made in streamlining trade in local currencies has brought Moscow and Beijing closer to creating a financial architecture that could facilitate transactions in gold.”

Just this month, Russia and China opened a yuan-clearing bank in Russia. And Russia’s central bank opened its first foreign branch in Beijing. And for several years, China and Russia have been building up their gold reserves.

“On a visit to China last year,” notes Russia’s state-run Sputnik website, “deputy head of the Russian Central Bank Sergey Shvetsov said that the two countries want to facilitate more transactions in gold between the two countries” — and ultimately among the other BRICS nations including Brazil, India and South Africa.

“The U.S. is playing monetary bully for now,” Jim Rickards sums up, “but all bullies meet their match when victims form a posse and push back. Russia is leading the way. The ultimate loser will be the dollar.

“That’s one more reason for investors to allocate part of their portfolios to assets that will survive a loss of confidence in the dollar, such as gold and natural resources.”

[Ed. note: We still have a few copies available of Jim’s most recent book, The Road to Ruin. This is a special edition available only to Agora Financial readers, with a bonus chapter laying out some of Jim’s favorite investment recommendations for the de-dollarization era.

You can get this book FREE, as long as you spot us $4.95 for shipping and handling. If you haven’t claimed your copy yet, here’s where you can act.]

“I don’t think Trump’s comments about letting Obamacare explode was a slip of any kind,” writes one of our regulars.

“He has stated outright many times, including when he was still a candidate, that Republicans should be careful of touching this stinky pile and let the Democrats continue to own it.

“It looks to me like the Republican strategy team decided to provide themselves cover from the collapse by putting together a bill they knew wouldn’t pass their own party. More importantly, they knew not a single Democrat would support it.

“The comments after it failed to pass perfectly fit this ‘cover theory’ when it was constantly repeated that Republicans tried as hard as they could to fix it but not a single Democrat would help, so now they own it when it explodes.

“Since the Democrats are just as cunning (in spite of my view that Nancy Pelosi is unhinged and can barely form a complete sentence), I predict they will decide to mirror this strategy with their own bill to fix Obamacare knowing that not a single Republican will vote for it, thus lobbing the stench back into the Republican court just as it is exploding.

“In the meantime, real people will risk being devastated financially as they are caught in the volley of responsibility as Obamacare implodes.

“It is not there for the people’s benefit regardless of their comments about service.

Now to settle some confusion.

“I have been watching several of your videos about pot stocks, and they are very exciting,” a reader writes — “including the one I received yesterday that mentions that ‘an 86-year-old investor named Mike G. hauled in an extraordinary $544,467 on ONE play.’

“I thought when I signed up for Technology Profits Confidential back on March 1 that Ray was going to give us heads-up on when to get in, how much to place, which pot stock to select and also when to get out. So far all I have been getting is infomercials on pot stocks (along with other stocks) with ways to pay for this service.

“Now we are getting info that we need to do something with pot stocks by midnight tonight, but am I missing it? Please advise.”

The 5: If you signed up on March 1 and still haven’t received your monthly issues, weekly alerts and special reports, that’s a problem. Contact our customer service team right away. Here’s their email.

To address your broader inquiry, and you’re not the only one…

Starting last summer, Agora Financial got around to the idea that “penny pot stocks” were a legitimate investment vehicle and not the stock market equivalent of a lottery ticket.

With that in mind, Ray Blanco selected a basket of such stocks suitable for nearly everyone, regardless of their risk tolerance or net worth. A $50 grubstake would give you some exposure to the sector, with the potential for big long-term gains. Ray published those recommendations in his entry-level newsletter, Technology Profits Confidential.

But as his research proceeded, Ray began to uncover what we call the “secret logic” behind the big moves many of these stocks make. From his home base in Florida, he worked feverishly with our team in Baltimore to develop a system exploiting this secret logic — delivering the potential to make a lot more money in a shorter amount of time. Thus, we launched a separate service called Penny Pot Profits.

Penny Pot Profits is not for everyone. The potential gains are immense… but a higher level of reward does bring a higher level of risk. And on our end, it costs more to perform the research that generates more frequent buy-and-sell recommendations.

So we charge a lot more for this service — to cover our own costs, yes, but also to keep out readers who have no business speculating in this fashion.

That said… if you are ready to take on something a bit more speculative, there’s no better time to subscribe to Penny Pot Profits. Our special deal is still available for a few more hours.

P.S. This is it. Last chance. No more reminder emails. After several weeks, our exclusive special offer for Penny Pot Profits expires tonight at midnight. It’s now or never.