Dispatches From the War On Savers

For all the media chatter this year about rising interest rates, “the war on savers still rages,” says our income guru Zach Scheidt.

“Retirees and savers who rely on interest payments to cover life expenses are still under severe pressure. And that’s not going to change anytime soon. If you’re currently covering your life expenses from savings — or if you expect to retire anytime soon — you need to find new sources of income besides Treasury bonds and savings accounts.”

Chew on this for irony: While the Federal Reserve has raised its benchmark fed funds rate twice since December, the interest you get on a CD or savings account has barely budged.

“That’s because the interest rates you and I receive for our deposits — and the interest rates we pay for mortgages and other loans — are much more closely tied to the Treasury bond market than the Fed’s target rate,” Zach explains.

The fed funds rate matters most to banks… because that’s what they charge each other for overnight deposits. “But the yield on Treasury bonds drives interest rates for most of the market,” says Zach. And while the yield on a 10-year note jumped in the three weeks after Trump’s election… it’s gone essentially nowhere since: 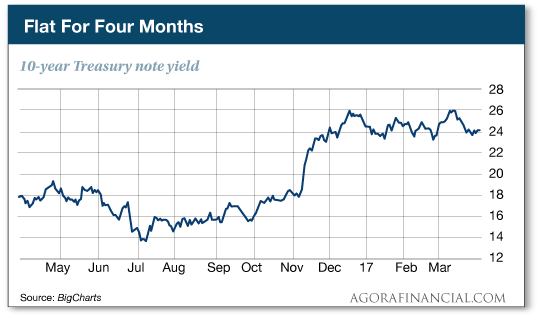 “The yield on Treasury bonds is primarily driven by market forces,” Zach goes on. Sure, the Fed’s target rate has some influence over market rates. But in today’s market, there are a lot of other big factors at work.

“One of those factors is the high level of uncertainty in the economy and in the stock market.

“While the U.S. economy is growing, political conflict over the U.S. health care program, taxes and the federal budget makes it hard for investors to know what to expect. At the same time, the stock market has gotten expensive compared with company earnings. That makes some investors nervous.

“All of this uncertainty has led investors to buy Treasury bonds for safety. And this buying, naturally, pushes Treasury yields lower.

“I mention all of this because the conventional wisdom that interest rates are moving higher is just plain wrong. Yes, the Fed has slowly moved its target rate higher. But market interest rates have been steady — and will likely continue to be steady for some time to come.”

While we’re at it, Zach would like to knock down another bit of conventional wisdom that’s hazardous to your wealth.

“Without borrowing this money — or because of the higher interest expenses — corporate profits will not grow as fast. And with less profit growth, stocks will trade lower as investors become disappointed.

“That makes sense if you look at only the higher interest rates that companies pay,” Zach goes on. “But there’s much more going on in the economy right now.”

For one thing, the economy is still expanding — however weakly. And the market is greeting every speck of positive economic news by bidding up stocks and the dollar (about which more shortly). “We’re in an expansionary phase of the economy,” says Zach. “And that’s the only reason the Fed can raise rates! (If the economy were stalling, the Fed would certainly not hike interest rates.)

“Also, keep in mind that the Fed is set to raise interest rates at the same time that new tax reforms are being debated in Congress. If the Republicans are able to pass tax legislation that reduces corporate tax rates, companies will be able to generate higher profits because of lower tax expenses.

“So even though interest expenses may be higher, tax expenses will be lower. This helps to offset the effect of higher interest rates and leaves companies in a stronger position.”

Zach’s bottom line: “When looking at the strength of the total environment (not just the higher interest rates), stocks could continue to trade higher.”

But… but… there’s still that valuation thing Zach mentioned earlier.

“When I say ‘valuation,’ I’m talking about how much investors are paying for stocks, compared with how much income the underlying companies are generating.

“Today, investors are paying a premium price — compared with earnings — to own many companies in the market. Investors are willing to pay more today to own a company that will earn more tomorrow. That’s the way the market works. Investors pay prices that reflect their expectations… not just what’s happening today.

“As a general rule, I don’t like paying premium prices for dividend stocks. That’s why I always look for companies we can buy at a reasonable price. And I look for companies that will pay us generous dividends that have the potential to grow over time.”

[Ed. note: Zach’s relentless search for investment income during this era of epic-low interest rates has led him to no less than 47 startling discoveries. Some of them are quality dividend-paying stocks, yes, but others are a little more unconventional. And he’s gathered all of them in Zach Scheidt’s Big Book of Income. Among the tips and tricks you’ll learn…

You can claim a free copy of Zach Scheidt’s Big Book of Income. All we ask is that you spot us the $4.95 shipping-and-handling cost. But we urge you to act quickly: We have only 450 copies of this book to give away today — if this link doesn’t work when you click, it means today’s ration is already spoken for.]

To the markets, which are in “post-GDP letdown” mode on this final day of the first quarter.

As we mentioned yesterday, the Commerce Department issued its third and final guess on fourth-quarter GDP. It registered slightly higher than the Street was counting on. That was enough to heft the Dow past 20,700 and the dollar index back above 100.

Today that’s all wearing off. The Dow is down 38 points as we write, back below that 20,700 mark. Likewise, the dollar index has eased a bit.

That dollar strength put a hurt on gold yesterday, pushing the Midas metal back below $1,250… and that’s where it remains this morning.

It’s all systems go for the Fed to raise the fed funds rate in June, judging by its favorite measure of inflation.

That measure is called “core PCE,” and it’s issued once a month by the Commerce Department. The latest reading issued this morning registers year-over-year inflation of 1.8%. That’s still shy of the Fed’s 2% target… but going back six months now, it’s been close enough: 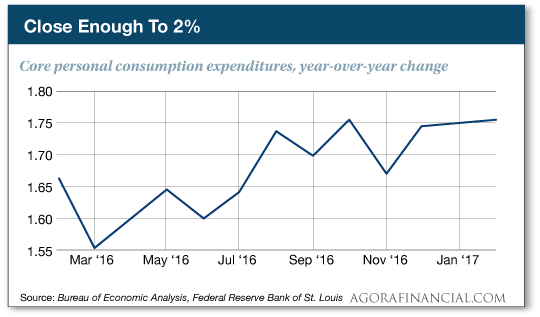 The same report also reveals Americans became more tightfisted in February: Personal incomes grew 0.4% but consumer spending grew only 0.1%. As a result, the savings rate has climbed from 5.2% to 5.6% over the last two months.

The online sales tax war is over… and Congress never ended up firing a shot.

For more than five years we’ve chronicled attempts by Congress to make online retailers collect sales tax — supposedly because it would “level the playing field” with mom and pop local businesses and deliver up to $24 billion in revenue a year to state and local governments.

Effective tomorrow, Amazon will collect sales tax in all 45 states that impose one — even if it doesn’t have a warehouse or other physical “nexus” in that state. That’s the direction Amazon’s been slowly moving this whole time. And Amazon is so dominant in online retail, its sales equal those of the next 19 online retailers combined.

This morning’s Wall Street Journal tells us the states are now setting their sights on Amazon’s legions of third-party sellers. For now, those sellers are still under the radar in many places. But in blue-state New York and red-state Wyoming alike, the crackdown has begun.

As we noted way back in 2011, Amazon has developed proprietary software so that online retailers can navigate the 10,000 combinations of state and local sales tax rates nationwide. We can’t imagine Amazon will allow its third-party sellers to undercut Amazon itself for very long…

“It’s even worse than you say,” a reader writes after we explained yesterday how the CIA exploits the vulnerabilities in hardware and software produced by American high-tech companies.

“As an IT systems expert with 35 years’ experience, I can assure you that these companies were — for the most part — fully aware of the exploits, as they put the exploits in themselves, as demanded by the U.S. govt.! The companies are only acting surprised and upset to save face.

“This has been going on for decades, and these kinds of exploits have repeatedly been in the news. Sometimes, like in the case of Cisco, they will burn a low-level engineer for planting the exploit, but anyone in IT can tell you this would not be possible without the rot extending all the way to the top.

“By the way, no company in the U.S. is immune from this manipulation by the Deep State; between carrot and stick, no company can refuse.”

The 5: Yikes. I mean, we knew already about the telecom companies’ craven cooperation with the feds’ collect-it-all surveillance. But you’re saying the tech companies are purposely building back doors too?

“Just wondering,” a reader writes, “if there were any updates with the ‘Trump tax cut Moneybomb.’

“I keep looking to see what’s going on with his tax reform plans and it looks like he won’t be getting it through within the time frame you guys predict these massive gains, every $2 invested could turn into $5,744. Sound familiar?

“Seriously — love The 5, though — you guys report the facts. I’ve always felt it in my gut that something big is going to happen in the next couple years, and your stories are proof that I’m not alone in that feeling.”

The 5: Hey, according to Bloomberg even as we write this morning, Trump is being briefed on his options for tax reform — meeting with a group of advisers that includes Goldman, er, Gary Cohn, head of his National Economic Council.

Yes, we realize the usual dynamic tension among our editorial team has reached a breaking point. A tax-reform moneybomb that starts April 15… or a crash that starts six days later?

In two weeks, the Agora Financial editors will be converging on our Baltimore headquarters to exchange ideas. I’ve been attending these gatherings for 10 years now. They’re always lively, but this might be the first where there’s blood on the floor. I’ll be there to bring you the blow-by-blow…

P.S. Oh, and speaking of outlandish ideas, don’t forget the wildest card of all — the weird red liquid that could cement Trump’s legacy as “the No. 1 POTUS of all time.” And he’d actually deserve some of the credit. Here’s the story.