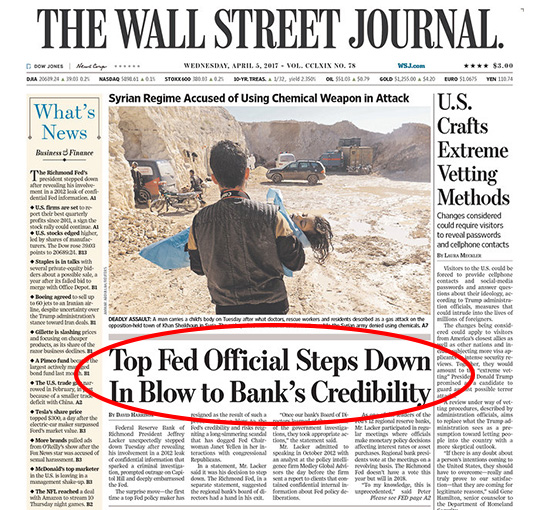 Right. Because the big story isn’t a top Federal Reserve official’s involvement in a leak scandal that might have allowed hedge funds to trade on inside Fed info. No, to hear the leading financial newspaper tell it, the real story is that the Fed’s “credibility” is in danger.

On Tuesday, Oct. 2, 2012, Lacker spoke on the phone with an analyst at a firm called Medley Global Advisors. On Wednesday, Oct. 3, Medley issued a report to its hedge-fund and asset-manager clients; it said the Fed was “likely to vote as early as its December meeting” to ramp up its QE3 bond-purchase program. On Thursday, Oct. 4, the Fed issued the minutes from its September meeting, which confirmed the news Medley’s clients read the day before.

The scandal has simmered since early 2013, when the Fed’s inspector general confirmed it had opened a leak inquiry. The general public first learned about the leak from Bloomberg and ProPublica in late 2014. Congress opened an inquiry in 2015 that went mostly nowhere.

But by yesterday, the scandal had gotten too close to Lacker. CNBC reports his resignation was negotiated with law enforcement, although his lawyer says Lacker will face no criminal charges.

Much of the news coverage these last 24 hours has focused on Lacker. Precious little has focused on the other end of the conversation — Medley Global Advisors, founded by a fellow named Richard Medley.

Medley’s career began as a Democratic politico. In the 1980s he was writing speeches for Walter Mondale’s running mate, Geraldine Ferraro. Eventually he linked up with a Republican politico named David Smick. They organized conferences on exchange rates and the dollar; this was a time when the dollar was at epic highs against other major currencies and talk of a trade war was heating up.

That was Medley’s entree into Wall Street. He and Smick then linked up with a vice chairman at the Federal Reserve Board of Governors named Manley Johnson. Together they launched a consulting firm, Johnson Smick Medley.

Richard Medley died suddenly in 2011 at age 60 — liver failure after a “short illness,” said a Washington Post obit. Reality TV fans had a front-row seat as his widow, Dorinda, grieved during Season One of The Real Housewives of New York City.

“I knew Richard from back in the day,” says an email from our own Jim Rickards.

Having worked with Jim for nearly three years now, we’re getting used to this. It’s not that Jim’s a name-dropper; he just plain knows everyone, which makes his insights so valuable. And his acquaintance with Medley wasn’t recent. It went back to Johnson Smick Medley in the ’80s.

“When Manley Johnson stepped down from the Fed, he joined the board of directors of my old firm, Greenwich Capital Markets (now RBS). I was general counsel and corporate secretary, so I worked with Manley all the time on board matters. I got to know Richard Medley, and he visited our offices a few times.”

“As usual, the cover-up is what does you in, not the original crime,” says Jim of Lacker’s downfall.

“The proper response at that point,” says Jim, “is to hang up the phone and call the FBI. Instead, Lacker was ‘mute.’ Washington insiders and intelligence operatives understand that when someone props you with intel and you remain mute, that’s equivalent to a confirmation. The mute part allows you to deny under oath later that you ‘told’ the other person anything. It gives you plausible deniability even though you actually did confirm the leak. Tom Clancy used to use this technique in getting sensitive information for his spy thriller novels.”

“So technically Lacker did not resign as the ‘leaker.’ He resigned because he implicitly confirmed the leak and misled investigators about it.

“This means that the original leaker is still at large,” Jim tells us. “My guess is the investigators are closing in on the perpetrator, so there’s another shoe to drop.”

Or as he put it in one of his elliptical tweets… 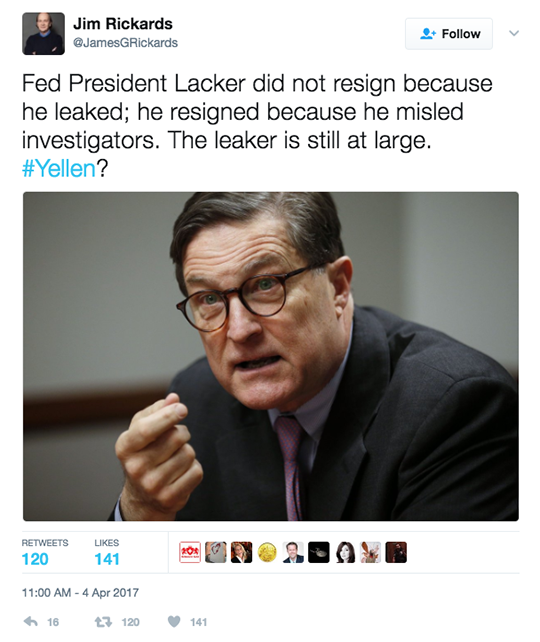 To the markets, where it’s the first “risk-on” day in more than a week.

The only economic number of note is a big surprise to the upside; the payroll firm ADP estimates that private-sector employers added 263,000 jobs last month. That bodes well for the Labor Department’s monthly jobs report due Friday, although ADP isn’t always the most reliable predictor of the “official” numbers.

Oh, no: JPMorgan Chase CEO Jamie Dimon just declared in his annual shareholder letter that “Too Big to Fail has been solved — taxpayers will not pay if a bank fails.”

The biggest U.S. banks, he says, have “dramatically” boosted capital, liquidity and risk controls in the years since the Panic of 2008.

“Comparing that figure to their total assets, we get a leverage amount of 24 times,” says Nomi. “To put that in perspective, that’s only slightly less than the leverage of their derivatives positions before the 2008 crisis.”

Now, it might be true, as Jamie Dimon says, that taxpayers won’t be on the hook in the event of another meltdown. But that’s because the events of 2008 made “bailout” a dirty word.

No, in the next crisis, the powers that be will resort to what Jim Rickards calls the “ice nine” scenario — as laid out in his most recent book, The Road to Ruin. You say you still don’t have a copy? You can get one in hardcover for only $4.95 right here.

Colorado is now three years and three months into legal recreational marijuana… and the governor concedes the universe did not collapse into itself.

Gov. John Hickenlooper opposed the 2012 ballot measure approving recreational cannabis. But as the chief executive, he recognized it’s his responsibility to carry out the laws. And his worst fears didn’t come to pass, he concedes in an interview with The Cannabist — The Denver Post’s weed-themed website.

Besides, what’s the alternative? “I don’t think there’s much question the old system was a disaster,” he goes on. “We sent hundreds of thousands — millions — on a nationwide basis, millions of kids to jail for nonviolent crimes. We inducted them into a high probability of a lifetime of crime, strictly by sending them to prison for something that was a nonviolent crime.

“This new system, where we may not be completely sure of [whether] we’ve solved all the problems and that we’re going to be successful in this grand experiment, does offer certain advantages to the status quo of the previous system. Now we have tax revenues.”

[Ed. note: It’s all systems go for the next round of “penny pot flashes” — the fast-action trading system Ray Blanco and our team have developed to pounce on the extreme moves in tiny cannabis-related stocks. If you’re not on board yet, here’s where you can go.]

The IRS’ internal watchdog just revealed the frightening extent of how the agency harassed small businesses a few years back.

We’ve related some of the stories already — the Dehko family in Michigan, who had $35,000 in revenue from their convenience store seized… and Lyndon McLellan, who lost $107,000 in similar fashion. Both were subjected to civil asset forfeiture… in which the government doesn’t accuse you of a crime, but suspects your cash is guilty of links to drug dealers, money launderers, etc.

Both of those store owners got their money back in the end. But they’re in a distinct minority. Yesterday the Treasury Inspector General for Tax Administration issued a report sampling 278 of the seizures between 2012–2014. It turns out 91% of the time, there was zero evidence of criminal activity — a legal theft of $17 million from business owners.

Because of the bad publicity in The 5 and other media outlets, the IRS ceased this practice in 2014. But if it were to resume in the future, doing so would be completely legal.

To prevent that, Rep. Peter Roskam (R-Illinois) submitted a bill last year making the practice illegal. It passed the House, but died in the Senate. He’s trying again this year. We’ll keep you posted…

P.S. If you’re a senior planning to retire soon, here’s something you need to ask yourself…

What are you going to do when the Social Security trust fund runs out of money?

Most seniors will be screwed, but a few Americans have already figured out how to “game the system.”

Thanks to a little-known Social Security contract, they will get money deposited directly in their accounts… No matter what happens to Social Security. It’s all thanks to this money that comes from the private sector.

When it comes to the tech sector in 2022, Ray Blanco says it pays to be “choosy.” Read More