Your editor sat down for lunch with Addison after putting the final touches on yesterday’s episode of The 5. We ventured to one of his preferred lunchtime haunts, Mick O’Shea’s — a few blocks from Agora Financial’s midtown Baltimore headquarters.

If you’re a newer reader, you should know Addison is not only our firm’s fearless leader… and the author or co-author of three New York Times business best-sellers in the mid-2000s… but also the creator of this e-letter. Ten years ago this month he hit “send” on the first episode of The 5. He wrote it most every day until 2012, when he entrusted me with curating our analysts’ best ideas on your behalf.

Think on his remark about Trump and politics for a moment and you know he’s right: For years, maybe decades, everyday Americans rightfully shunned politics. It was slimy and sleazy… and besides, what could you do about it? Best to tune it out and focus on events within your own control.

Now you can’t get away from it, even if you try. As my wife pointed out a few weeks ago, politics in general — and Trump in particular — have become like John Belushi in that old Saturday Night Live skit about “The Thing That Wouldn’t Leave.” Trump is the intrusive houseguest scarfing down our food, leafing through our albums and making long-distance phone calls.

Oh, and causing sudden unpredictable movements in a variety of asset classes.

While Addison and I were lunching, the president was being interviewed by The Wall Street Journal. He delivered a blizzard of headlines by saying…

On top of his new opinion yesterday about the NATO alliance (“I said it was obsolete. It is no longer obsolete”), the president pirouetted more in the space of a couple hours than a prima ballerina. (Sorry if we created the word-picture of Trump in a tutu there. We know it’s disturbing.)

Trump’s word salad about the dollar (“Look, there’s some very good things about a strong dollar, but usually speaking, the best thing about it is that it sounds good”) immediately tanked the greenback relative to other currencies… and to gold. 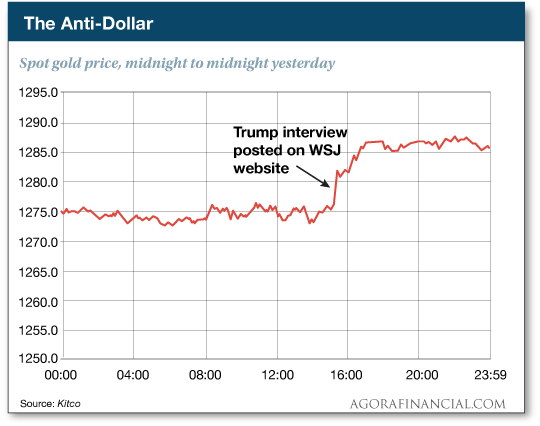 With that, gold rests at another year-to-date high. Meanwhile, Trump sent Treasury rates tumbling: The yield on a 10-year note has broken through support and now rests at a year-to-date low of 2.26%. (Mortgage rates are also at their lowest all year.)

Now here’s a twist to Trump and the markets that you might not have thought about.

Greg Guenthner, one of our resident chart watchers and editor of The Rude Awakening, recently ventured to a conference in New York. “The Trump bug has burrowed into Wall Street’s brain,” he says. “Even the smartest money managers in the business are stuck on politics. Everyone I spoke with was talking Trump — and not necessarily because they wanted to. These money managers are tuned in to Trump’s rhetoric because of their clients.”

“Half the country wants Trump to fail,” one prominent fund manager told Greg. “They aren’t putting their money to work.”

“According to many of the professionals I chatted with last week,” Greg elaborates, “the anti-Trump crowd is yanking their money out of the market at a frantic pace. Money managers attempting to play potential policy changes are getting more than an earful from their clients.”

This is completely new. During the Obama administration, people might have been reluctant to invest because they were nervous about what crazy policy might be coming out of the White House next. But now, there are people who refuse to invest — simply as an act of spite against Trump.

Meanwhile, the White House can’t get its story straight about which comes first — Obamacare reform or tax reform.

A few weeks ago, the failure of Paul Ryan’s “Obamacare Lite” legislation appeared to clear the way to move on to the more doable priority of corporate income tax reform — a priority shared with many Democrats.

During his Wall Street Journal interview, the president was asked if he would lay down guidelines for Congress on what he wants in a tax bill before a health care deal gets done. His answer was, “No.”

Look, we don’t know how soon corporate tax reform will get done. But we do know it’s a priority both for the president and for the Senate’s top Democrat, Chuck Schumer. And we also know if you start positioning yourself with the right strategy, the payoff could be enormous — up to 2,872 times your money.

And the ideal time to begin executing this strategy is right now. Start here.

As the morning wears on, most asset classes are treading water. The Dow remains a touch below 20,600. Gold is holding onto its gains.

Earnings season is underway. Three of the Big Four commercial banks reported this morning; no major surprises to the upside or the downside.

The big economic number of the day is producer prices — down 0.1% in March, compared with an “expert consensus” expecting a flat reading. The Federal Reserve is getting closer to achieving the inflation it wants… but it’s a two-steps-forward-one-step-back proposition, it seems.

A breakthrough in the treatment of mental illness just delivered a small windfall for readers of our FDA Trader service.

In late January we told you about the quest to treat a disorder called tardive dyskinesia. It’s an awful side effect of antipsychotic drugs. “Many people with TD are unable to speak, chew or swallow,” said Ray Blanco of our science-and-wealth team. “Their tongues move uncontrollably, and they might even break their teeth.”

Two days ago, right on schedule, the FDA approved the drug. It was “a remarkably clean approval,” Ray tells us. “The drug’s label contains no ‘black box warning’ — warnings of dangerous side effects. This will help the company secure superior market share against other late-stage drugs.”

Ray’s readers are sitting on a 25% gain; for now, shares are above his recommended buy-up-to price. If you’re looking for a way to put your money to work in biotech right now, Ray says his best bet is a cancer treatment that could render Trump “immortal.”

There’s one more Trump flip-flop yesterday we don’t want to overlook — because it gets to the heart of the swampy-drainy thing he emphasized during the campaign.

The Export-Import Bank will continue to exist under a Trump presidency.

“The Ex-Im Bank,” Jesse Walker at Reason reminds us, “uses tax money to finance and insure foreign purchases of American exports. Boeing and the bank’s other beneficiaries think this is a great setup; the foes of corporate welfare are less impressed.”

Indeed, some critics call Ex-Im “the Bank of Boeing.”

Back to The Wall Street Journal’s account of its interview with the president: As he courted these limited-government voters during the campaign, Mr. Trump said the agency was unnecessary and referred to it as “featherbedding” for politicians and big companies.

“Instinctively, you would say, ‘Isn’t that a ridiculous thing,'” Mr. Trump [now says] of the Ex-Im Bank. “But actually, it’s a very good thing. And it actually makes money, it could make a lot of money.”

Wait, does it now make money or could it make money? Which is it?

“You seem to make it sound like you are the only one in the country who tells it like it is,” a reader writes after we described our new venture America Uncensored here on Monday. “I have been reading content like that for some time now and want to welcome you to the group.

“The Heritage Foundation, the Goldwater Institute, Hillsdale College and others have been doing this for a long time. I spend a lot of time reading the publications of these organizations and supporting them in other ways.

The 5: The Heritage Foundation? You mean, the outfit that came up with the idea of an “individual mandate” for health insurance before Democrats glommed onto it?

“Being a lifetime subscriber to Jim Rickards’ Strategic Intelligence,” writes another, “one of the items I look forward to each week are the five (not to be confused with The 5) articles Jim recommends.

“His summary is a quick read, and if time and interest allow, there is a link to the article Jim draws his perspective from.

“If your new venture is anything like this, my feeling is it will be a big hit.

“Everyone has a take on everything — so if Agora can provide the ‘This is how this might impact your finances’ perspective on current events, the information will be a value at the twice the price!

“Oh, that’s right, America Uncensored is free, but you get my meaning.

“How refreshing to hear what Jim Rickards has to say distilled into a couple of phrases,” a reader writes after we summarized Jim’s latest views on the euro yesterday.

“I like J.R., but I refuse to listen to/watch his interminable video presentations. How long would it take him to say don’t count out the euro…?”

“Hopefully, the only red thing spilled was a glass of wine,” a reader writes after we mentioned there might be blood on the floor at our editorial meeting, given our editors’ diverging viewpoints.

“After all, it would be irresponsible for the editors to enter into a good ol’ saloon-style donnybrook, only to forget the bucket of sawdust.

“As for you, Dave, acting as referee and tossing the occasional cold compress to the clobbered combatants is all that’s necessary. Besides, if you wind up with a blackened eye and bruised knuckles, who else will correct my woeful grammar for this publication?”

The 5: The meeting hasn’t yet taken place. In fact, I’m about to take the short stroll down to the Hotel Monaco in Baltimore, where we’ll convene this afternoon. My fear is that after building up expectations, the ideas will be lively, but the promised CONFLICT won’t materialize. Heh.

In any event, we’re back with a full report tomorrow…

P.S. “The stock exchange isn’t a pulpit,” said the investment newsletter guru Harry Browne, who died in 2006. “If you want to promote a particular environmental policy, political philosophy or other personal enthusiasm, do it with the profits you make from hardheaded investing.”

Mr. Browne’s words came to mind as we assembled today’s episode of The 5. If it’s true that legions of investors are sitting on cash to spite Trump — and we don’t doubt our colleague’s description above — what will they do once the “Trump moneybomb” goes off?

How will they feel once they miss out on the chance to multiply their money thousands of times over?

Wherever you stand on the president, you don’t want to miss out on the potential gains, do you?