It’s not that the headline is wrong… but it does overlook some problems with the markets and the economy that have nothing to do with war and peace.

Recall on Friday while the markets were closed the feds revealed two big blows to the “accelerating economy” narrative. Retail sales disappointed… and inflation suddenly slowed.

Turns out that slowing was even more dramatic than we first said: “Core” inflation, excluding food and energy, registered its first monthly decline since January 2010.

Reminder: Both of today’s numbers are “soft data” — sentiment surveys and such. Of late, the soft data’s been much more bullish than the “hard data,” of which we’ll get more tomorrow, including industrial production and housing starts.

Meanwhile, projections of first-quarter GDP keep getting revised downward. The latest estimate from the Atlanta Fed — which has a respectable track record in this regard — is a sickly 0.5% annualized rate.

“All of these developments are consistent with a recession in the near future,” says Jim Rickards. No guarantees, he cautions — but that’s direction right now.

“Average annual growth during the current expansion is 2.15%. Average annual growth in all post-1980 expansions is 3.19%. That 1% differential may not sound like much, but with the effect of compounding, it’s huge. A 2% economy doubles in 35 years. A 3% economy doubles in 23 years. After about 50 years, the 3% economy will be more than twice as rich as the 2% economy. There’s a multitrillion-dollar output gap being created, which will never be recovered.

“Meanwhile, government debt continues to grow at 3% per year, soon to be 4% and higher, according to Congressional Budget Office calculations,” Jim goes on.

“What happens when your wealth grows at 2% but your debt grows at 4%? Answer: You go broke.

“The bottom line is America is going broke slowly, growing poor slowly, and may be headed into a recession quickly.

“Bonds and gold have already figured this out. Bonds are soaring on lower rates in anticipation of a recession. Gold is soaring on a safe-haven bid due to geopolitical uncertainty, and in expectation that inflation is the only way out of the debt problem. Stocks are getting a wake-up call now that Trump’s ‘stimulus’ plans are being deferred or going up in smoke.

“All it will take to accelerate all of these trends and put the economy into a recession is one more Fed rate hike in June. As of now, that’s exactly what I expect.”

[Ed. note: Even before June, Jim anticipates a development that will send gold sharply higher. By his estimation, it could come a mere 11 days from now.]

Despite today’s rally, there’s underlying rot in the stock market — which, we hasten to point out, peaked more than six weeks ago.

For one thing, small caps have been going nowhere for four months. “We like to see small-cap stocks lead the market,” says Greg Guenthner in today’s Rude Awakening. “Investors buy smaller stocks when they are willing to take more risk. That’s not the case right now.” 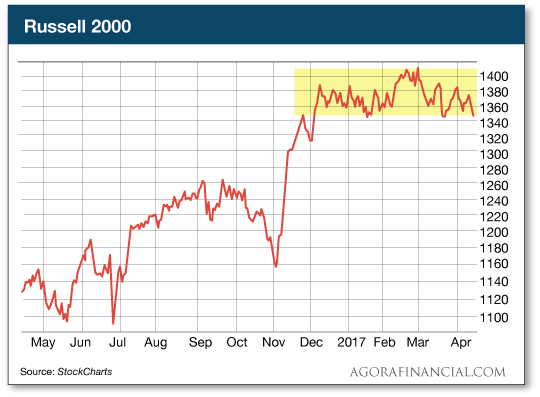 “The idea is that the two groups combined can measure the overall health of the economy. If the industrials are performing well along with the transports, we can assume goods are being made and delivered. In other words, the economy is humming along.

“The transports slipping lower could turn out to be an early-warning sign that the industrials are in for a bigger drawdown as we approach the summer.”

Meanwhile, volatility as measured by the VIX is its highest since the election. The VIX, as you might know, is often considered the market’s “fear gauge.”

“Over the past few months,” says our income specialist Zach Scheidt, “the VIX has been trading at a very low level. Investors have been happy with the ‘Trump Bump’ as the market moved higher. And volatility has been very low.”

But not so in recent days. “The threat of a new cold war with Russia, gridlock in Washington and a new round of earnings reports all have investors on edge,” Zach tells us. “And that’s why we’re seeing the VIX start to trade higher. 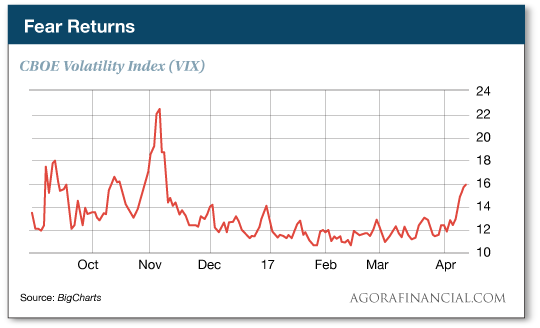 While traders on Wall Street might be feeling jittery, many of Zach’s premium subscribers eagerly await the VIX heading still higher. Two or three times a year, a spike in the VIX gives them a chance to collect extra-large income payments using Zach’s perpetual income strategy. “This window of opportunity is usually open for only a very brief time,” says Zach. “But for investors who are quick to take advantage of it, the instant profits can be very lucrative!”

Every new subscriber to Zach’s Income on Demand gets a special report describing how to seize on this window of opportunity. If you’re not familiar with Zach’s strategy, here’s a terrific introduction. 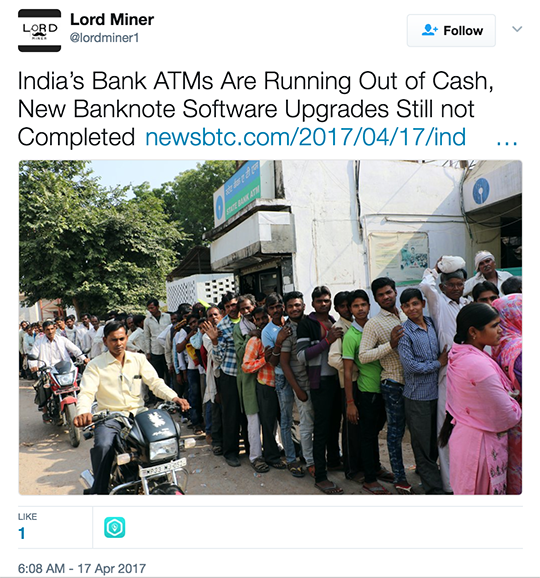 As a reminder, last November India’s Prime Minister Narendra Modi banned the country’s most commonly used bank notes — about 85% of all cash in circulation. The new bank notes intended to replace them were available only in limited quantities; they were also a new size, so ATMs had to be retrofitted. Long lines and even riots ensued.

Modi justified the move as a crackdown on tax evasion on India’s huge, cash-based economy… but he also copped to a long-term plan to push India in the direction of a cashless society. So that’s the context for this latest development.

At present, total cash in circulation in India is about two-thirds what it was before the ban — despite government claims of “back to normal.”

From the Financial Times: “ATM operators, which collect money from banks to refill cash machines, say bank branches are hoarding notes to serve their own customers, instead of distributing them more widely across the country.”

In addition, it appears the shortages are more acute outside the largest state, Uttar Pradesh — where there were local elections in recent weeks, won by Modi’s party. How ’bout that?

We never tire of reminding you that India’s cashless scheme was hatched in Washington, D.C., at the U.S. Agency for International Development. As far-fetched as it might seem that the Indian scheme would come to America, we urge you not to dismiss it out of hand.

“Love The 5, but the basis for your everlasting belief in the euro as expressed in last Thursday’s edition evades me. You point out that during the Greek crisis polls consistently showed that 60% of the Greek people favored the euro, and backed this up by comparing current inflation in Greece to the days of their own currency prior to the euro.

“Of course the Greeks (and the Italians and the Spanish) love the euro: It allows them to export their inflation to the other member countries that use the euro. But it is in the other end of the equation that the problems lie with the euro. Do you really expect Germany, Austria and the other northern EU countries to appreciate the opportunity to accept that inflation and to fork over to the EU the tax risks that go with it? It is the other side of the coin you need to look at, not just at Greece.

“You expect that the euro will strengthen in the months ahead as Angela Merkel’s chances for re-election strengthen this fall. Personally, I expect Merkel to be re-elected, but on the grounds of the Germans’ love for physical cash. Merkel’s opposition has stumbled on this in the past when they supported eliminating the 500 euro note. The clash of the titans will be between the German Bundesbank and the European Central Bank.

“As the Germans say, ‘Freedom always dies bit by bit,’ and the Bundesbank has taken sides in the war on cash. Consumers in Germany still make about 80% of their transactions using cash, including for large purchases. Figures in Austria are about the same. According to Bloomberg, ‘592 billion of the 1.1 trillion worth of euro bank notes in circulation at the end of 2016 started life at the Bundesbank,’ which I expect far exceeds the allotment set forth by the EU.

“My thinking is to look to the north instead of being fixated on the southern part of the EU to see issues related to the euro and to the EU; I see clouds forming in the north.”

The 5: Thanks for the insight. Interesting background, for sure.

Jim Rickards has long been of the opinion that the euro is not primarily a monetary project, but rather a political one, pressing relentlessly for tighter European integration.

The knock on the euro is that the eurozone nations have a unified monetary policy but 19 different fiscal policies; there’s no “federal budget” per se.

Jim says that criticism misses the point: “The founders of the euro knew that a unified fiscal policy would be needed, but that was too much too soon to ask of European voters in the 1990s when the Maastricht Treaty on the EU, which led to the creation of the euro, was ratified.

“EU proponents settled on the more popular monetary union doable at the time. The idea was to push for unified fiscal policy and, eventually, true ‘eurobonds’ (guaranteed by the entire eurozone) at a later date.”

The Maastricht Treaty was signed 25 years ago. The architects of European integration are thinking long term, and they are patient…

“You guys are a riot with that opening line,” a reader writes after last Friday’s 5. “Trump is and has been totally consumed by the Deep State and is now one of their own.

“My gut tells me he always was and was only saying the things he said in his campaign to get elected. Not that that makes him any different from every politician this side of Ron Paul.

“Sorry, but I do believe that Trump still has you and Jim Rickards bamboozled. I sometimes feel Jim is a little too close to his contacts in the Deep State to be completely objective.

“But alas, The 5 will continue to treat his enunciations as pronouncements from the Mount.”

The 5: Has the thought occurred to you that elements within the Deep State still wish to remove Trump even though he’s begun doing their bidding?

P.S. If, in the course of reading today’s 5, you can’t shake the feeling something bad is about to happen in the markets… one of my distinguished colleagues says you’re absolutely right.

What’s more, he says you want to be positioned for what’s coming no later than the end of this week. Click here to see why he’s so concerned.