Morning (In America) Is Broken

So much for that rerun of the “Morning in America” Reagan years — the fantasy Wall Street had been constructing in its collective mind about the Trump administration.

In February, Treasury Secretary Steve Mnuchin committed to getting tax reform passed by the time Congress goes home for summer break. “We want to get this done by the August recess,” he told CNBC.

As we pointed out at the time, that deadline wasn’t something chosen at random. When Reagan took office in 1981, his administration managed to push the Kemp-Roth tax cut through Congress by Aug. 4.

Yesterday Mnuchin conceded to the Financial Times that the deadline is “highly aggressive to not realistic at this point.” The failure of Obamacare reform has pushed back tax reform “a bit.”

Mnuchin is still too optimistic, says our own David Stockman — who was Reagan’s first budget director and had a front-row seat for the passage of that first tax cut.

If you’ve been reading us for a while, you know that’s not a new assessment of David’s. Indeed, it’s been a theme of his going back to last December — the notion that most of the Trump economic agenda will run aground on the shoals of a divided Congress and a splintered GOP. But it’s worth a revisit this morning in light of Mnuchin’s revised and suddenly fuzzy timeline.

“By now,” says David, “it has become crystal clear that there will be no great Trump Stimulus. Instead, what lies ahead is an unprecedented outbreak of dysfunction, paralysis and unmitigated mayhem in the Imperial City…

“The fact that The Donald has now flip-flopped on five core issues — China’s currency manipulation, the Fed, the Ex-Im Bank, NATO’s obsolescence and intervention in the Syrian civil war — in less than a week is merely indicative of the chaos to come.”

And don’t forget: Congress has to come up with a “continuing resolution” to fund the government for the rest of fiscal 2017 within the next 10 days. Otherwise, it’s “partial government shutdown” time.

Nor is that the only disappointment awaiting the Street. The new day has brought another batch of weak economic numbers on top of the weak inflation and retail sales figures last Friday…

Heh… For the last few years, the mainstream attributed weak GDP growth in the first quarter to a “harsh winter.” This year, they won’t have that excuse. And as we mentioned yesterday, the latest reliable forecasts of first-quarter GDP are a pathetic 0.5% annualized.

“Some economists call that ‘stall speed,’” says David, “and after 94 months of the most tepid recovery in modern history there is no other way to describe it. We’d guess that after the Q1 numbers are in that real GDP will have grown at a 1.25% annualized rate since the prior peak in Q4 2007 — or by hardly one-third of the historic trend rate of 3.4%.”

And at this time of a weakening economy and political dysfunction, “the median stock is now trading at the highest multiple of earnings in history,” David goes on — “including 2000 and 1929.

“It is only a matter of time until the residual bullishness and buy-the-dips robo-trading that temporarily sustained the dot-com bubble through March 2000 and the housing/credit bubble through September 2008 finally give way.

“That’s especially true because the Federal Reserve is out of dry powder, and the Keynesian money printers who run it are already marching against the tide — raising interest rates and preparing to shrink its bloated balance sheets — in order to prepare for the next recession.

“Indeed, given this backdrop and a global economy that is freighted down under $225 trillion of debt and massive excess capacity, the stock market is surely in the midst of the ‘Everything Bubble’: 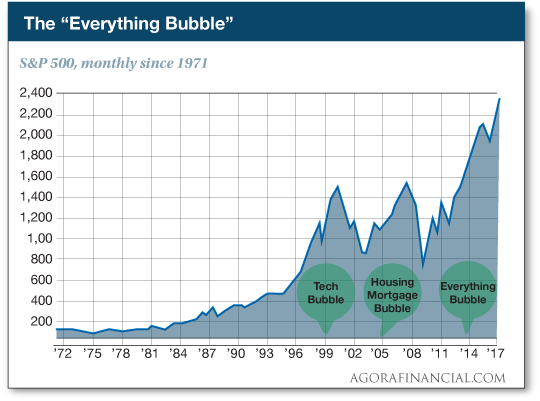 It is destined to end like the two previous bubbles of the last 20 years. And David says there’s strong reason to believe the trouble will begin on Friday — only three days from now. The situation is of such urgency that David just recorded a short video message. We urge you to click here and give it your full attention.

Hey, whaddya know? As we write, the Dow industrials have given up about half of yesterday’s gains. The Big Board is down to 20,537.

Some of that is a function of the day’s earnings numbers; Goldman Sachs delivered a rare “miss,” and it’s one of the 30 Dow stocks. Thus other indexes haven’t taken quite as big a hit.

Gold is holding its own at $1,288. Treasury rates are again slipping; the 10-year is down to 2.2%, and there’s no doubt now the 10-year yield has broken through support that held since late November. That means fearful money is fleeing into the perceived safety of Treasuries.

Elsewhere, trader chatter is about the snap election British Prime Minister Theresa May has set for June 8, the better to cement a Conservative majority in Parliament going into the “Brexit” process.

For the record, gold has now made a round trip since Election Day. 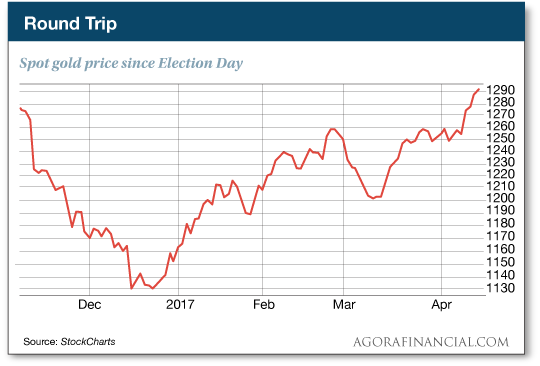 “What’s unusual about this rally,” says Jim Rickards, “is that it has taken place in the face of significant head winds, including Federal Reserve interest rate hikes on Dec. 14, 2016, and March 15, 2017, with an additional rate hike expected in June.”

Plus the aforementioned weak economic numbers, we hasten to add.

“Higher interest rates with borderline recessionary growth and deflation is not the kind of environment one thinks of as positive for gold. In fact, it’s quite the opposite. Gold’s rally nonetheless tells us that hidden forces are driving gold prices higher despite the head winds.”

Those hidden forces include rising “geopolitical tensions” — something we took note of with the U.S. airstrike on Syria — but also tightness in physical supply.

“Gold miners are exploring new areas,” Jim explains, “but the lead time is five–seven years to open a new mine. A lot of gold mining capacity was shut in or ignored after the gold price bust of 2011–15, and that capacity will not be made up soon. With strong demand coming from Russia, China, Iran and others, the tightness in supply will persist and put a floor under physical gold prices.

“Investors who buy gold and gold mining stocks now can still enjoy the rally and possibly reap huge additional gains if a political shock emerges unexpectedly. Gold looks like a classic asymmetric trade. It may go up slowly or go up suddenly, but there don’t appear to be any factors on the horizon that would take it down.”

Today might be Tax Day… but Tax Freedom Day isn’t till next Sunday, April 23.

“Tax Freedom Day is the day when the nation as a whole has earned enough money to pay its total tax bill for the year,” says Scott Greenberg at the nonpartisan Tax Foundation. “Tax Freedom Day takes all federal, state and local taxes — individual as well as payroll, sales and excise, corporate and property taxes — and divides them by the nation’s income.”

This year, Americans will fork over $3.5 trillion in federal taxes and another $1.6 trillion in state and local taxes. That’s $5.1 trillion total — more than we spend on food, clothing and shelter combined.

Of course, the numbers vary depending on where you live. Tax Freedom Day was April 5 in Mississippi; it’s still more than a month away in Connecticut. 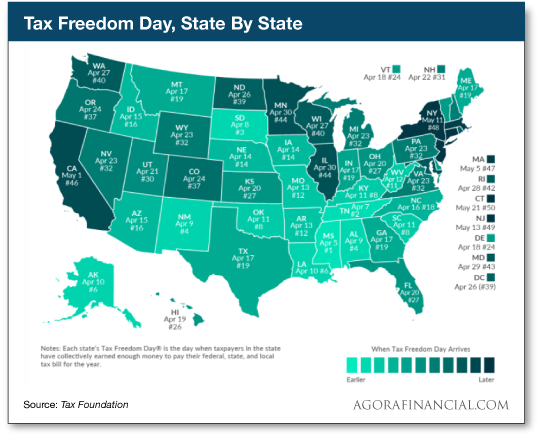 “I can’t help but bring to light another example of political overreach by Congress,” a reader writes.

“It seems our beloved (sarcasm intended) junior senator from Maryland just can’t wait to exercise his privilege of being a member of that elite group, the United States Senate.

“Word has it he is working on legislation that would prohibit airlines (just for example United) from forcing passengers to relinquish their places on a flight. The details have yet to be worked out but it is almost certain the proposed legislation will not only solve the dilemma that United faced but also impose innumerable restrictions on air travel (and possibly other forms of public conveyance). What Mr. Van Hollen seems to forget (or perhaps is totally unaware of) is we have a process to correct egregious actions such as those taken at the behest of United. It is called a day in court and the backlash of public reaction.

“By now I am almost certain United regrets the outcome of last week’s travesty, and as the story continues to unfold I have no doubt they will review the incident in its entirety and emerge with a more customer-friendly approach (which will also suit any corporate needs they want fulfilled).

“The real loser in this entire story is the United States taxpayer. Congress cannot solve the problems that are truly theirs to contend with: namely continuing resolutions, debt ceilings and budget deficits, to name a few. Instead, to avoid dealing with these real and present problems they always seem drawn to muddle in affairs that would be better left to be solved by those better informed and situated to deal with such problems.

“This is but another example of why the approval rating of Congress is lower than a snake’s belly.”

The 5: There’s nothing wrong with the airlines that a little more competition couldn’t fix.

If Congress really wanted to make a difference for you and me, it would allow foreign ownership of domestic airlines.

“Foreign companies and individuals — think Richard Branson and Virgin Atlantic Airways — are forbidden by U.S. law from owning more than 25% of a domestic airline,” writes Reason’s Matt Welch in the Los Angeles Times. “That’s why Virgin America could be sold last year to Alaska Airlines over the express wishes of Virgin’s famous founder: He just didn’t have enough votes…

“What on Earth justifies such pre-Trump xenophobic mercantilism in our increasingly globalized world? According to North America’s Air Line Pilots Association.: ‘These regulations ensure the national security of our country and the integrity of our airline industry.’ Or translated into honest-ese, ‘These regulations ensure the job security of unionized U.S. nationals and the continued existence of poorly run U.S. airlines.’”

P.S. As we get closer to virtual press time, the major U.S. stock indexes are moving deeper into the red. The Dow is in danger of surrendering all its gains from yesterday.

David Stockman believes that action is a precursor to something much worse that could begin as early as Friday. Check out his urgent warning at this link.