It’s a “risk-on” day in the markets… and to hear the mainstream tell it, it’s all about a dweeby-looking 39-year-old Frenchman who married his high school drama teacher… 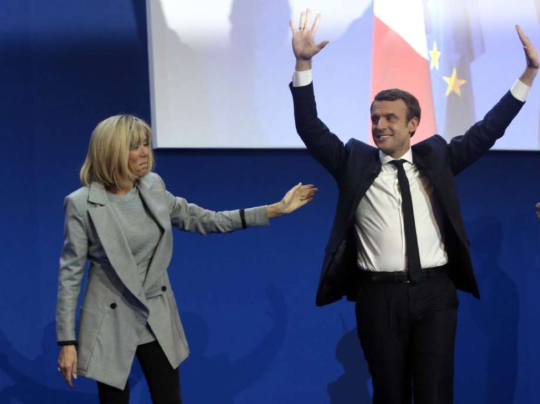 Are those super-thin 1960s ties making a comeback in Europe?

The first round of France’s presidential elections is over. Supposedly, the grand elite project of “European integration” is no longer under threat with status-quo candidate Emmanuel Macron the presumed winner of the second round in two more weeks.

Which might well be true… but there are some twists and turns to the story the mainstream is overlooking. There’s still the potential for a market shock, about which more shortly.

Going into the election yesterday, one of the top four candidates wanted France out of the European Union. Another wanted to renegotiate the terms of membership. And the race was a statistical dead heat among all four. 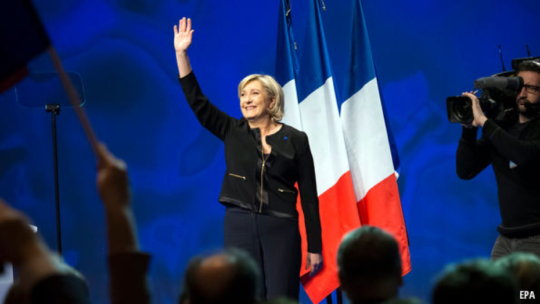 As a matter of fact, Obama called Macron last week to wish him well in the first round… while Trump said Le Pen is “the strongest on borders, and she’s the strongest on what’s been going on in France.”

The mainstream is counting on a Macron victory on May 7. And so is Jim Rickards. But Jim and the rest of us will keep an eye peeled over the next two weeks for the possibility of a Brexit-level shock — of the sort Jim stood nearly alone in predicting last year, to the great profit of many readers.

Watching the coverage last night on France’s state-run English news channel France 24, we noticed a complacency among the lopsidedly pro-EU panel. Of course, they said, the pro-EU factions would unite behind Macron to stop the wicked Le Pen. The Romney-ites would line up behind Obama to stop Trump, to extend Jim’s analogy.

This was the sort of elite complacency we saw going into the Brexit vote and the U.S. presidential election. Just sayin’.

Here’s the thing: Even if there is a Brexit-level shock, that doesn’t mean the end of the EU.

“Even if Le Pen wins,” says Jim, “she cannot abolish the euro in France or withdraw from the EU without a further referendum on that specific topic. French polls show strong support for the European project and the euro. If Le Pen were to win, it would be based on her policies on other subjects, such as immigration, rather than her anti-EU views.”

But wait: Coming down the pike are four more votes affecting the future of the European Union:

June 8: British elections. Again. Prime Minister Theresa May wants to bolster the Conservative majority… but a second objective is to sideline the most hardcore anti-EU forces in Britain as she pursues negotiations for Britain to leave the EU. “Brexit will still go ahead,” Jim explains, “but the degree of separation from the EU may be less radical than otherwise”

Sept. 24: German elections. The very pro-EU Chancellor Angela Merkel might or might lose power after 12 years, but that’s not the most important point. “None of the likely outcomes in the German elections would result opposition to the EU or the euro,” Jim says. “Yet all of them would diminish Germany’s commitment to EU goals of open borders and fiscal prudence”

Sometime before March 15, 2018: Italian elections. Italy has had 64 governments in the 72 years since the end of World War II… and a 65th will be formed after elections sometime in the next 11 months. The pro-EU Democratic Party led by Matteo Orfini would have to form a coalition if it’s the top vote-getter… and that’s far from certain

Late 2018–early 2019: Another referendum on Scottish independence from Britain. The last one in 2014 failed, but Scots voted against Brexit by a wide margin last year; seceding from Britain would allow Scotland to stay in the EU.

Here’s how Jim handicapped all these races — and the French runoff — last week in Rickards’ Strategic Intelligence:

“I expect victories by Macron in France, May in the U.K., Merkel in Germany and Orfini (or his party) in Italy, and I expect Scotland to remain in the U.K., but just barely. However, the probabilities in each case are in the 55–60% range, except for May, who has an 80% chance.

“A 55% probability on five separate outcomes means that the probability of all of my forecasts playing out is close to zero and at least one shock is on the horizon. In other words, we’re playing poker with wild cards in the deck.”

But even with four out of five elections breaking in a pro-EU way, Jim says “there is good reason to have long exposure to the euro.” He already has his Currency Wars Alert readers positioned accordingly.

[Ed. note: Jim has developed a strategy to profit from swings in the currency markets without the usual risks that come from currency trading. Imagine “skimming” the biggest forex transactions on the globe for tens of thousands of dollars.

The next opportunity, says Jim, is coming on May 10. Check out his brand-new presentation right here.]

Five days and counting till a “partial government shutdown”… and for the moment, the president appears determined to risk a shutdown to get a down payment on his border wall.

Team Trump brought a unified message yesterday to the Sunday talk shows: Any deal to keep the government funded for the rest of fiscal 2017 must include some funding for the wall. Oh, and the president says he still wants to take another whack at Obamacare repeal-and-replace, and he’ll introduce a tax proposal on Wednesday. Clearly, he wants something to claim as a victory for the proverbial “first hundred days” — the end of which coincides with the budget deadline Friday.

We’re not political prognosticators here… but Trump is surely aware of the history of the last two shutdowns. Obama in 2013 and especially Clinton in 1995 successfully pinned the blame on Congress. No doubt he’s also aware Congress has a far lower approval rating than even his own.

But markets still appear oblivious. As the day wears on, the risk-on trade remains solidly in play…

Every month, Creighton University economist Ernie Goss surveys bank CEOs in rural areas of 10 states stretching from Illinois to Wyoming, and the Dakotas to Kansas. From that survey he compiles his Rural Mainstreet Index. Numbers above 50 indicate a growing rural economy; below 50 a shrinking one.

The number’s been mired below 50 for 20 straight months. In February it notched its highest reading since September 2015 at 45.8. But it’s been sliding backward ever since, and the April number is 44.6.

Given that it happened the same day and that big cities were affected, the conspiracy-minded went into overdrive. “Cyberattack Feared,” said one of the more popular “prepper” websites. Liberals on Twitter, meanwhile, had something new to blame on PUTIN!!!

But it does appear to be a freak occurrence. In San Fran, a circuit breaker at a substation suddenly quit, setting off a small fire. A construction accident appears to be to blame in LA. An electrical line failed in New York.

“False” is the verdict given by the debunking site Snopes to rumors of a cyberattack. We have our beefs with Snopes — too often, it takes the pronouncements of government officials as gospel — but it appears to be on solid ground here.

That said… Friday serves as a warning about the very real threat of a cyberattack on the power grid. We daresay it’s the terrorist act most likely to affect your life — far more than a random bombing or shooting. Our Laissez Faire unit is keen to alert you to the risks… and the steps you can take to protect yourself. Get informed, and prepared — starting here.

“My goodness,” begins today’s mailbag. “How many of us idiots were waiting breathlessly for the big market event which would happen precisely on Friday the 21st? And riding piggyback on your prediction by telling friends hoping to chevron ourselves in borrowed insight and wisdom.

“Well, here we sit with powder dry and eyes moist. Still hoping that perhaps Monday, or Tuesday, or…?

The 5: All the factors that went into David Stockman’s prediction remain in play. David had good reason to pin it to last Friday; just because it didn’t pan out then doesn’t mean it won’t pan out at all. And his further prediction of serial government shutdowns and total paralysis in Washington is closer than ever. As noted above, it will blindside Wall Street.

“I agree with the reader’s comment on charging for additional services,” a reader writes after Friday’s mailbag. “I subscribe to several of your services. This has been one of my pet peeves, and I think you missed his point.

The 5: At no time is a reader “paying twice” to get the same recommendations.

In fact, most of the recommendations in Penny Pot Profits are totally inappropriate for a reader of Technology Profits Confidential. Most of the names in Penny Pot Profits are small and thinly traded. If we suggested that tens of thousands of Technology Profits Confidential subscribers buy them, their share prices would soar… and then crash.

That would be bad for us and bad for readers. The higher price we charge for a premium advisory serves as a natural brake on that phenomenon. And as we said on Friday, it also serves as a barrier to entry for people who don’t fully appreciate the risks that come with the potential reward. Those folks are better off sticking with Technology Profits Confidential.

P.S. Some $4 trillion trade every day in the global currency markets. Isn’t it time you grab your share of those profits?

“But forex trading is complicated and risky,” you say. Yes, it is. That’s why Jim Rickards has worked hard to develop an alternative way to “skim” profits off the forex markets. Play it right and you could skim $25,441 or far more. See how it works right here.