Allow us to be the first to wish you Happy Loyalty Day.

Although the liberal contingent of the Twittersphere seems rather unhappy… 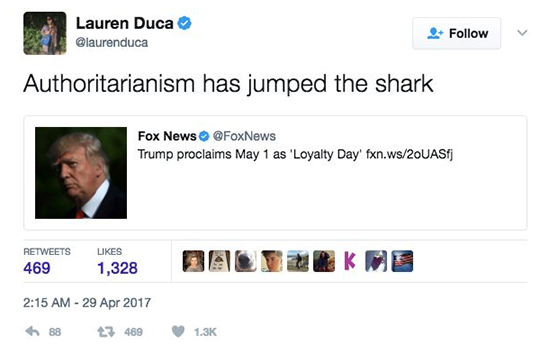 Never mind that Barack Obama also declared May 1 Loyalty Day. Indeed, “Loyalty Day has been recognized with an official proclamation every year by every president,” says Wikipedia, “since its inception as a legal holiday in 1958.”

And yes, it was a Cold War thing — pushback against May Day.

Truth be told, your editor had never heard of it until this past weekend. Seems like an odd thing for a nation born in rebellion. To my ears, it sounds rather — well — Canadian. (No insult intended to our Canadian readers.)

If shopping is an act of patriotism — as we were told in the weeks after Sept. 11, 2001 — Americans are looking mighty traitorous these days.

This report comes on top of the first-quarter GDP number that came out Friday. It laid an egg in large part because consumer spending — which makes up 70% of GDP — wasn’t up to snuff.

So much for the surveys and other “soft data” showing consumer confidence at sky-high levels. The “hard data” tell the real story.

The first blow was the so-called “Amazon effect.” The allure of online shopping is undeniable. Online is even starting to dominate apparel — a segment once thought “safe” for traditional retailers because people want to, you know, try stuff on.

No more: The research firm eMarketer says apparel and accessories will overtake computers and consumer electronics this year as the biggest e-commerce category — measured as a percentage of total online sales. And this morning’s New York Times tells us Amazon will surpass Macy’s during 2017 as the biggest seller of clothing in America.

The second blow isn’t as obvious, but it’s one we’ve mentioned before: America has a gargantuan quantity of retail space compared with the rest of the developed world.

“The U.S. today is massively over-stored,” chimes in our own David Stockman — “even before taking into account Amazon’s scorched-earth campaign in the world of bricks-and-mortar retailing.

“Just since 1995, for example, more than 300 new shopping centers have opened in the U.S. That expanded GLA (total gross leasable area) by almost 30%. Yet that occurred after the U.S. retail sector already had vast excess capacity. It was also during a period when the population grew by less than 14% and households were steaming toward the dead end of Peak Debt.”

Result? “There is roughly 50 square feet of shopping space per capita (including small shopping centers and independent retailers),” says David. “In contrast, Europe and most other developed parts of the world have less than 10 feet per capita.”

2017 has already been a brutal year for traditional retailers.

January and February brought the demise of American Apparel and The Limited stores.

March brought bankruptcy filings for the electronics retailer hhgregg and the outdoor-gear seller Gander Mountain. The same month, Sears issued a warning about its continued existence as a “going concern.”

It didn’t get any better last month. Payless, the shoe retailer, filed for Chapter 11; about a quarter of its stores will close. Fashion retailer Bebe will shut down altogether. Even at the high end, retailers are struggling; privately held Neiman Marcus abandoned plans to go public. 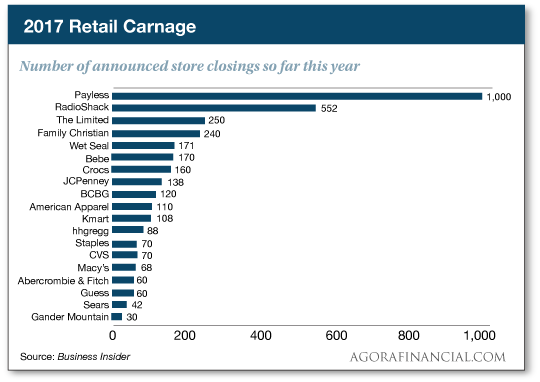 But David Stockman believes the biggest blow of all in retail is set for just 10 days from now. And this one might well tank the rest of the stock market with it.

“America’s retail apocalypse,” he calls it… and he’s eager to show you how to parlay it into huge gains — up to 29 times your money in only a few months. Check out David’s brand-new eye-opening video at this link.

The major U.S. stock indexes are treading water as a new month begins. The Dow is flat and the S&P 500 is up less than a quarter percent. But the Nasdaq is powering higher into record territory, up nearly half a percent at 6,076.

Like the aforementioned income-and-spend report, the rest of the day’s economic numbers are underwhelming.

The ISM Manufacturing Index for April clocks in at 54.8. That’s still comfortably above the 50 dividing line between expansion and contraction… but it’s lower than the lowest guess among dozens of economists polled by Bloomberg.

Digging into the “internals” of the ISM, we find new orders are still strong — but also the weakest reading in five months.

The ISM is a sentiment index — “soft data.” For months we’ve seen a divergence in the factory sector between strong soft data and weak hard data… and now the soft data are starting to catch up with the hard stuff.

Also today, the Commerce Department delivered the Federal Reserve’s favorite measure of inflation, called “core PCE.” When the Fed talks about its 2% inflation target, it’s talking about core PCE. And from the Fed’s standpoint, all the ground that’s been gained over the last year was just lost in a single month… 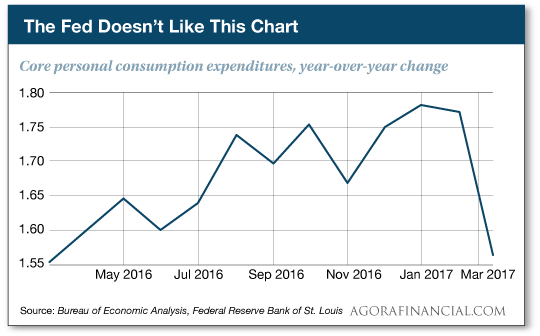 That said, the number probably won’t dissuade the Fed from raising interest rates again next month. (There’s an earlier Fed meeting this week, but at this time we’re not expecting any big news.)

Meanwhile, traders are breathing a sigh of relief that a “partial government shutdown” has been averted. After passage of a one-week budget stopgap last Friday, congressional negotiators have come to terms on a deal to keep the government running through September.

Of course, Uncle Sam will bump up against the debt ceiling long before that. But hey, one phony crisis at a time…

Now an update on how the Trump tax plan might affect your 401(k).

As we said last Tuesday, “Goldman” Gary Cohn, director of the National Economic Council, has been kicking around the idea of turning pretax 401(k) contributions into after-tax contributions — like a Roth.

Then on Wednesday, Cohn unveiled the single page of White House bullet points for tax reform. He promised that current provisions in the tax code affecting retirement savings will be left untouched under the Trump plan.

OK… but there’s a lot of horse-trading to be done with Congress between now and the time any tax bill is passed. “There are lots of options available to use the retirement savings system as a piggy bank, unfortunately,” says Michael Hadley of the lobbying firm Davis & Harman. And he means a piggy bank for Uncle Sam.

Congress’ Joint Committee on Taxation has already run the numbers: If they zeroed out pretax retirement contributions, the feds would rake in another $584 billion from 2016–2020.

“Mandating some level of Roth contributions in place of pretax contributions by participants is one of the primary ways Congress is considering altering the current tax structure of [401(k) and similar] plans,” says a report at Investment News.

“Given the fluidity of these conversations, we’re not taking anything for granted,” says Brian Graff, CEO of the American Retirement Association.

Nor are we. We’ll keep you up to date — even if some readers believe their sainted president would never resort to such a measure. “Clickbait fake news BS,” one reader opined after our expose last week.

It really is true, Trump’s line about how “I could stand in the middle of Fifth Avenue and shoot somebody and I wouldn’t lose voters.”

“This whole administration has been like a half-assed term paper,” a reader writes after our characterization of the “tax plan” last week.

“I can’t think of a single thing they’ve done that could be described as well thought through and solidly based on rational analysis. Don’t give them the benefit of the doubt. They don’t deserve it. I believe you have seen pretty much the totality of the administration’s thinking on tax policy in one sheet.

“Now they think it’s up to somebody else to make it work — except the math doesn’t add up: Trump’s plans never have, even on his campaign website. Despite previous claims to the contrary by the Reagan and Bush administrations, tax cuts demonstrably do not result in magical money showering down from the skies to pay the government’s bills.

“I’m unashamedly liberal (but an investor, too — who knew that could happen?). I actually believe that government can do good things, but ultimately the collective ‘we’ have to decide what we want the government to do and either pay for it or stop asking it to do things we can’t afford.”

The 5: Thank you for not buying into the “stimulus” orthodoxy that pervades the nation’s capital. It’s just as bogus whether the stimulus comes from Republican tax cuts or Democrat spending programs. And it’s been on our minds of late as we reflect on the early years of this e-letter and the documentary I.O.U.S.A.

“We do, in fact, vehemently agree in the desired goal of reducing the size of the federal government!” writes a reader with follow-up correspondence for last week.

“Unfortunately, due to the nature of our elected representative federal government, smaller hasn’t been an option for any of us collectively either. And I don’t think you would be for a presidential power to affect that type of change without congressional approval.

“After the last eight years of no congressional oversight, no budgets, just authorizations to spend, even Reagan’s rather practical idea of a line-item veto doesn’t overcome the newly perceived potential abuses of unchecked executive power.

“Although (trying not to use the ubiquitous ‘but’) I do have one giant nit to pick over your comparison of raising the debt. I inferred and believe you implied that Reagan’s tripling of the national debt was worse than younger Bush/Obama doubling of the debt. Reagan’s triple took debt from roughly $900 billion to $2.6 trillion.

The 5: Worse? No. Just poking holes in the Reagan mythology. As much as people remember him for saying government isn’t the solution, it’s the problem… government kept growing like a weed under his watch and he raised taxes 11 times…

P.S. Many thanks to Brian Maher for spelling me here on Friday and Saturday.