Or so The Wall Street Journal tells us… and this is one instance where we don’t have reason to question the mainstream narrative. Among the S&P 500 companies, first-quarter profits are up an average 13.9%. Among the sectors benefiting most — financials, technology and the long-battered energy space. 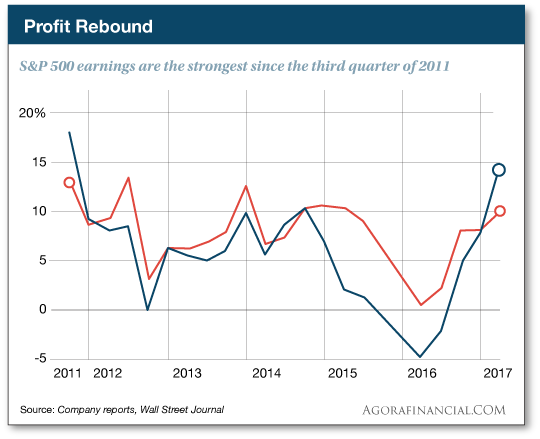 But… “Part of the [profit] improvement has come from keeping a lid on spending,” says the paper, “and many CEOs remain reluctant to change and open their wallets for new projects, plants and people.”

Fink is CEO of BlackRock, the world’s biggest asset manager. In the spring of 2014, he wrote an open letter to the CEOs of the other 499 S&P 500 companies. We cited it the day it came out.

“It concerns us,” he wrote, “that in the wake of the financial crisis, many companies have shied away from investing in the future growth of their companies. Too many companies have cut capital expenditure and even increased debt to boost dividends and increase share buybacks.”

We offered a plain-English translation that went like this: “After five years, you turkeys have cost-cut as much as you possibly can. If you expect to keep growing your earnings, you jolly well better start investing in the future of your businesses to attract more customers. You do think such investments will pay off, right? Don’t you? Anyone? Bueller?”

Fink doubled down on his message in 2015: Corporate America is “underinvesting in innovation, skilled workforces [and] essential capital expenditures necessary to sustain long-term growth.”

Now Fink says much depends on what happens in Washington.

Valuations in the U.S. stock market have reached “extreme” levels, “with the expectations… that we are going to have tax reform and deregulation,” he told Fox Business last month. “I believe this is going to take a somewhat longer time, but we all should hope that we are going to get some success out of the [Trump] administration to validate the marketplace.”

[For the record, Fink is a Democrat. For years, he was angling to become Treasury secretary in a Hillary Clinton administration — even putting Clinton confidante Cheryl Mills on the BlackRock board.]

Fink says don’t rule out a 5–10% pullback in the stock market… after which he would “buy, buy, buy.”

[Ed. note: With earnings season about to wind down, Louis Basenese expects seven “rigged” stocks to make big moves in the days ahead after their earnings announcements. Previous episodes of this “rigging” enabled people like you to collect gains of 325%… 536%… even a staggering 7,400%.

But to collect these gains, you need to be properly positioned this week. Because of the time-sensitive nature of the opportunity, we’re taking this special report offline tonight at midnight.]

To the markets, which can scarcely rouse themselves to react to the French election results.

At last check, the Dow had shed 14 points — just enough to push it below 21,000. Gold is likewise little moved at $1,227. Crude’s late-day rally on Friday is starting to fade, and a barrel of West Texas Intermediate is back below $46.

As you probably heard, the establishment candidate Emmanuel Macron trounced the Trump-esque Marine Le Pen by a 66-34 margin. In reality, however, a record number of voters either spoiled their ballot or left it blank — about 9% of the total. (Oui, oui, says we.) So the real margin is more like 60-31.

And that’s just the people who bothered showing up; turnout was the lowest since 1969.

Our longest-of-long-shots trade on the French election, described here Friday, is in rough shape. The May $28 put options on the iShares MSCI France ETF (EWQ) are down 90% from Friday.

If you took a flier on a Le Pen victory, Dan Amoss says don’t dump the position today. Wait instead until the option rebounds to the range of 25 cents… or it expires worthless on May 19.

“It doesn’t make sense to sell today, near the market price of 3 cents,” says Dan, “because there is still a possibility EWQ approaches $28 by May 19.”

As we said, it was a long shot — which is why we published it in a free e-letter. Fortunately, readers of Currency Wars Alert are doing much better on a French election trade. With the euro near $1.10, Dan urged readers this morning to sell their call options on the CurrencyShares Euro Trust (FXE) — good for a 44% gain in less than a month.

Don’t feel bad if you missed out on this chance to “skim” the currency markets. Another opportunity is just around the corner.

The “great dollar shortage” Jim Rickards first told us about in early 2016 is reaching an acute stage.

Here’s a quick recap of Jim’s thesis: The Federal Reserve created $3.4 trillion in dollars between 2008–2015 by ballooning the Fed balance sheet. But that flood of new dollars has been dwarfed by the creation of more than $60 trillion of dollar-denominated debt.

As long as the dollar stays weak, it’s all good. But relative to a large basket of foreign currencies, the dollar remains near its strongest level of the last two decades… 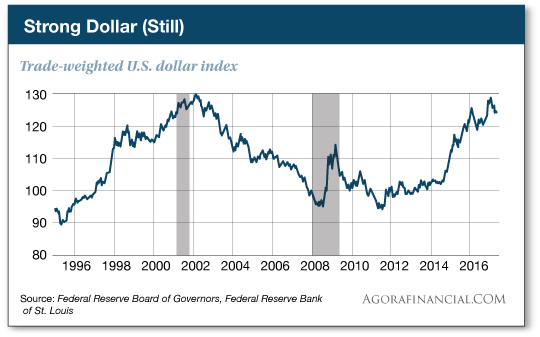 In time, that could prove devastating for emerging-market companies that issued dollar-denominated debt betting on a weak dollar in perpetuity.

“The fact is since 2009,” said Jim, “there has been far more dollar-denominated debt created than dollars. There are not enough dollars to go around. The losses will be enormous.”

Both institutions have spotlighted the dollar-shortage phenomenon in their most recent reports — another instance of “the alarm bell you’re not supposed to hear.” Reports like these, Jim explained to us in 2014, “are written in highly technical language and are read by only a relatively small number of expert analysts.”

At times, the reports might get picked up in the financial press — but not on the front pages. “For you, such pronouncements are just more financial noise in a flood of information that washes over you every day on TV, radio, the web, in newspapers and in other publications. The power elite are not signaling you — they’re signaling each other.”

Both reports address what happens if and when the Fed starts to shrink its bloated balance sheet — which might happen later this year. “Once the Fed slows its purchases of Treasuries and other securities,” summarizes this morning’s Financial Times, “the dollars effectively pumped out around the world through those deals will start to disappear.”

It doesn’t mean a crisis tomorrow or next week. But it remains on our radar. We’ll keep you posted…

And now a strange tale of how big-money politics distorts the media.

No, the only reason the station is adding the newscast is to accommodate demand for… campaign commercials.

There’s a congressional district in the Atlanta suburbs that was represented by Tom Price, who recently became secretary of Health and Human Services. The race to replace him is intensely competitive — the two candidates separated by barely a percentage point.

Demand for commercial time is so intense that the station’s existing newscast inventory can’t accommodate it all. So it’s launching the new newscast.

“In other words,” says The Atlanta-Journal Constitution, “the bonus newscast is more a place to air these ads for a few weeks rather than an actual consumer service.” (The newspaper happens to own a competing TV station, which explains the snark. Heh…)

Once the election is over on June 20, the newscast will be over too… and mercifully, it’s back to Andy Griffith reruns…

Our most interesting entry in the mailbag comes from the Cornhusker State, where over the weekend Warren Buffett held his annual pilgrimage known as the Berkshire-Hathaway annual meeting.

But there was another gathering that to us is more interesting. And he writes as if he was there…

“Last week, the state of Nebraska held hearings on allowing the Keystone XL Pipeline to build through the eastern third of the state, avoiding the Sandhills and the Ogallala Aquifer.

“About 99% of the speakers that attended were against the pipeline, as these eco-warriors claim it is the ‘fuse to the biggest carbon bomb on the planet’ because of the carbon emissions from the oil it will carry. If the pipeline is approved and the fuse lit, climate scientist James Hansen says it’s ‘game over for climate.’ Passion oozed like tar sand from the voices of the men and women who just want to save the planet. As one woman put it, ‘Twenty-five years from now, our children will curse us if we build this pipeline.’

“But with 99% of the attendees crying and wailing and gnashing their teeth over the danger of the oil that the Keystone XL pipeline will transport to refineries in Louisiana and Texas, it only took one man to destroy all their fearful scenarios.

“Standing before the board as one in favor of the pipeline, he was booed and jeered by the fearless eco-warriors who fear the great pipeline.

“His argument was short but to the point with nary a tear.

“He said, ‘Warren Buffett thanks each and every one of you who are here today fighting against this pipeline! You see his diesel-burning locomotive engines pulling railroad trains of 200 and 300 tank cars in length for the Burlington Northern Santa Fe Railroad running 24 hours a day, seven days a week, for the past 10 years, presently, and into the foreseeable future, have been delivering that ‘carbon bomb’ oil that this pipeline would deliver economically and safely to Louisiana and Texas.

“‘Mr. Buffett’s monopoly is the only thing threatened by this pipeline. The oil has been getting through and all our children are still alive. The only question that is pertinent to ask about this pipeline is whether to allow it to compete with Mr. Buffett’s diesel locomotive delivery monopoly or not. All the rest is hyperbole.

“No cheers, no applause, just a few hundred eco-warriors silently realizing they were dupes of Warren Buffett.”

The 5: Yup. As we pointed out here about 18 months ago, railways can charge a markup to move a barrel of oil that’s four or five times the markup of a pipeline operator. Nice work if you can get it…

P.S. Final reminder: As many as seven “rigged” stocks are set to zoom up with their earnings releases in the next few days. Here’s your last chance to learn about it: This web page comes down at midnight tonight.