Well, well… The S&P 500 is down about half a percent as we write this morning. Which isn’t much in the scheme of things… but it’s the biggest daily drop in a month.

The “retail apocalypse” of which we’ve been saying much this month kicked into high gear this morning. Macy’s (M) delivered its quarterly numbers… and they deposited many feces on the bed.

Earnings were 24 cents a share… way off the “expert consensus” calling for 35 cents a share. Revenue also missed. And same-store sales are down 4.6%, compared with the typical Wall Street analyst’s guess of 2.7%.

Kohl’s (KSS) delivered an earnings “beat”… but missed on revenue. And same-store sales dropped 2.7%, compared with expectations of 1.2%.

Gone are the days when Kohl’s could thrive in all economic conditions: In good times, working-class shoppers feeling flush could step up from K-Mart to Kohl’s. In bad times, higher-end shoppers feeling strapped would step down from fancy department stores and go slumming at Kohl’s.

Meanwhile on the luxury side of things, Nordstrom (JWN) reports after the close today. But in light of the other retail numbers, traders aren’t waiting to hit the sell button: Nordstrom shares are down more than 6.5%.

The news from Macy’s bodes very ill for the rest of the “Big Six” chain department stores.

These are the ones that historically have served as “anchor stores” at the malls. They’re the ones most vulnerable to the phenomenon our David Stockman’s been describing here in recent days — the overbuilding of retail space in America, fueled by decades of EZ money from the Federal Reserve. As with the housing crisis a decade ago, it’s all coming home to roost now.

“One recent analysis,” says David, “showed that the Big Six anchors would have to close more than 800 stores just to get back to the sales productivity levels of 2006. In fact, J.C. Penney, Sears and Macy’s have announced nearly that many closings during the last few months. 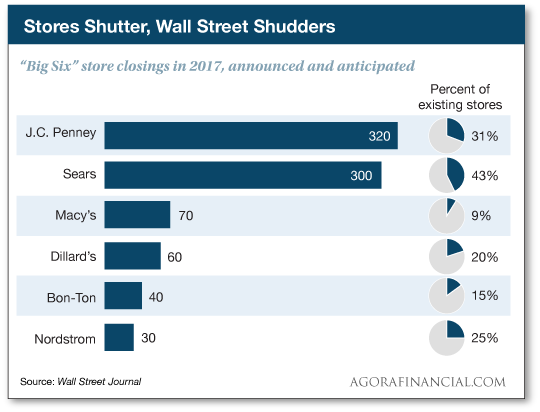 “Mall anchors are challenged by an oversupply of retail space as customers migrate toward online shopping,” David continues — “a trend that has been compounded by loss of business to fast-fashion retailers like H&M and off-price stores such as T.J. Maxx.

“As a result, one leading expert believes that about 400 of the country’s 1,100 enclosed malls will fail in the upcoming years. Of those that remain, he predicts that about 250 — or 20% — will thrive and the rest will continue to struggle with shrinking traffic and sales volumes.”

David has his readers well-positioned to profit as the retail apocalypse continues to unfold. And it’s not too late to join their ranks and profit likewise. There will be more nasty earnings surprises to come… as he explains in this chilling and all-too-timely video.

Aside from retail, the other big drag on the market today is Snap Inc. (SNAP) — the social media darling that went public in early March.

The company issued its first quarterly numbers after the close yesterday. No one was expecting Snap to turn a profit. But Wall Street analysts were expecting the growth of Snap’s user base to keep accelerating. Instead, year-over-year growth was the slowest since 2015.

With that, the value of Snap shares is disappearing nearly as quickly as the photographs taken with the company’s Snapchat app. SNAP is down 19% as we write at $18.60 a share. Remarkably, that’s still higher than the IPO price of $17 that Wall Street insiders were able to pay. But literally every retail investor who bought SNAP since it went public and who hasn’t sold yet is now in the red.

Hey, we warned you. More than once.

In this morning’s Rude Awakening, Greg Guenthner reminds us of an interesting back story: Facebook tried to buy Snap in 2013. Rebuffed, Facebook CEO Mark Zuckerberg set out to replicate everything Snapchat does. “Zuck simply implemented his competitor’s ideas, stepped back and watched the market newcomer fall to pieces.

“Remember, most IPOs are just cash grabs for up-and-coming companies and underwriters — especially in trendy sectors and industries. Some young traders just learned this lesson the hard way.”

As long as we brought up Facebook… really, it and four other stocks are the only reason the overall stock market is still hanging in there.

At 2,391 this morning, the S&P 500 sits more or less where it did at the beginning of March. Since then, five of those 500 stocks have gained $260 billion in market cap. The FANG stocks that were so trendy in 2015 are now the FAANG stocks — Facebook, Apple, Amazon, Netflix and Google. (Google has since rebranded as Alphabet).

Because the overall index has moved nowhere and those five stocks have grown so fast, that means “the remaining 495 stocks in the index lost as much in total market capitalization as the FAANG stocks gained,” writes the observant financial blogger Wolf Richter.

As we pointed out a few weeks ago, it’s characteristic of a late-stage bull market that a handful of stocks get all the love — so much that they can keep the overall indexes elevated.

No, that’s not an imminent crash warning. But it’s something we’re watching closely…

Vermont’s nickname of the “Green Mountain State” is about to get a new meaning.

The Vermont legislature has passed a bill legalizing recreational marijuana — up to a point. Possession of an ounce or less would not be subject to any criminal or civil penalties. Users could also grow their own plants. Sale and purchase, however, would remain illegal. Gov. Phil Scott appears inclined to sign the bill.

Thus will Vermont become “the first state in the nation to pass a legalization measure through its legislature rather than by ballot initiative,” writes Mike Riggs at Reason. That’s a development we’ve been anticipating ever since the bow wave of ballot initiatives that passed in eight states last November.

Vermont is the first, but it surely won’t be the last. The opportunities for big and fast moves in penny pot stocks can only multiply from here.

And now a truly helpful measure of your purchasing power relative to the rest of the world.

As you might know, for years The Economist has published its “Big Mac Index” comparing the price of McDonald’s best-known burger in cities around the globe and adjusting it for currency values.

But we submit that Deutsche Bank has come up with something better — especially if you travel widely. They recently dispatched researchers to find out the cost of a beer in a neighborhood bar in the expat area of nearly 50 world cities.

The handful of U.S. cities in the survey all ended up in the upper half among the 50 global cities — from a high of $7.40 in New York (good for fourth place overall) to a low of $5.30 in Chicago.

“Safety alone is not the appropriate sole criterion for an FDA-approved drug,” writes a reader responding to yesterday’s episode.

“A medicine must be shown to be effective by good science before the insurance companies and the government are asked to pay for it, let alone the public. After all, snake oil is assuredly safe.”

Writes another, “The unbelievable amount of malfeasance in the FDA is actually a threat to Americans’ health. This new bozo rushing stuff to market will probably have an adverse effect on the people’s health as well. DUMB!”

The 5: Y’all forgot the part about human sacrifice, dogs and cats living together, mass hysteria…

The current system is rigged in favor of Big Pharma, which has the deep pockets to comply with sky-high regulatory costs. (Not that Big Pharma’s been doing much innovating in recent years, but that’s another story.) Small fries, by and large, tend to get shut out.

And what’s so great about the current system when it does nothing to stop deadly disasters like Vioxx and fen-phen from coming to market?

Meanwhile, how many lives have been lost because of FDA foot-dragging that’s kept potentially lifesaving cures off the market?

“I was just wondering if Jim Rickards had an update on China’s continued stockpiling of gold,” a reader writes. “I think it’s been a while since we heard an update.

“Are those new roads you mentioned yesterday going to paved with the yellow metal? Thanks as always for The 5.”

The 5: We’ll put in a request to Jim. We did see today that gold demand by private investors in China leaped 30% during the first quarter of this year, according to the World Gold Council.

But government purchases in China are suspended for the moment as Chinese leaders scramble to shore up their foreign exchange reserves.

At least that’s the official story. As we’ve been saying for years, the official numbers understate the size of China’s gold stash, and by a lot: The real size might be double the numbers issued for public consumption.

“I wonder whether Jim Rickards is just waking up to the Chinese overland initiative,” writes another.

[Hardly. Jim’s been on the case of China as a rising power for years. But go on…]

“If you want to know what is going on in the world, watch CGTN — Chinese Global Television Network. A recent segment there showed Mercedes-Benz and BMW cars being transferred from Kazakhstan rail to Chinese rail, making Chongqing an official port of entry.

“Also, they showed a brief segment on a successful test of a Chinese quantum computer that is 24,000 times faster than the U.S. competitor — yes, that’s right, 24,000 times as fast.

“As the 20th century was the American century, the 21st century will be the Chinese century. And (if humanity survives that long) so will the 22nd century and maybe more. The present international advantage enjoyed by the dominance of English as a lingua franca will be replaced by Chinese as the dominant international language by 2035. And Americans still aren’t studying Chinese.”

The 5: Well, that much is true. Few Americans are following the advice of Jim Rogers and encouraging their kids to learn Mandarin — much less moving to Singapore, as he did.

David Stockman says the story’s just getting started. But if you position yourself right, you can transform the “retail apocalypse” into life-changing gains. He’s refined just the strategy to pull it off… and it’s not too late to get started. Watch here.