“Rattle.” It’s one of those words headline writers love but none of us uses in everyday conversation — heh.

More from the salmon-colored rag: “Investors were retreating to the sidelines on Wednesday and seeking havens on concerns that President Donald Trump’s ability to push through his pro-growth policies will be sidelined by deepening political controversy.”

Say analysts from Citi: “At best, the press is making mountains out of molehills, and the ongoing scandals in Washington, D.C., may lead to slight delays in reforms for health care, tax reform, deregulation, trade, etc. At worst, we cannot remove the possibility of impeachment.”

Guys, where’ve you been this whole time?

“Washington will be paralyzed for months — even years — after the inauguration,” said David Stockman in this space way back on Dec. 1.

“There will be no massive tax cut, no huge infrastructure initiative or any other variation of the ‘fiscal stimulus’ will-o’-the-wisp that seems to have sent the bond markets reeling and the stock averages to giddy flights of fantasy.”

On Feb. 23, David dialed up that forecast: “The ruling elites are determined to take The Donald down, and whether they succeed or not, it is extremely probable that Washington will grind to a halt — Watergate-era style — by early spring…

“Then the meltdown will begin, and the stock market will be bidless because all the robo-machines will be selling the news of breakdown, dysfunction, fracture and crisis in the Imperial City, not Donald Trump’s ‘hopium’ tweets.”

So what’s unfolding today is, fundamentally, old news. And that’s not what you come to us for.

What’s new amid the market carnage today — or newer than D.C. dysfunction, anyway — is the next phase of the “retail apocalypse” David’s been warning about all this month.

The earnings eggs laid last week by Macy’s, JCPenney and Kohl’s are in good company — this week the nest is filled to overflowing.

Dick’s Sporting Goods delivered disappointing first-quarter numbers yesterday… and worse, fessed up to a “computational” boo-boo in its fourth-quarter numbers. TJ Maxx parent TJX Cos. also fell short of expectations — bad news for the off-price segment of retail. And the fashion-and-accessories retailer Rue21 should rename itself Chapter 11… because that’s what it just filed for.

True, as noted here yesterday, Home Depot’s doing fine. But HD has a special niche of product that’s hard to sell over the internet. And Target blew away the Street’s expectations in its quarterly report this morning… but that’s only because TGT management did a better job of lowering those expectations than its retail compatriots.

The problem in retail is more than Amazon… and more than a consumer who’s feeling stretched.

Wall Street figured retail was recovering from the Panic of 2008 in the same way it recovered from every other post-WWII recession. So Wall Street invested accordingly — bidding up share prices of retailers and mall property owners.

Instead, says David Stockman, “what has been happening during the last five years is the opposite of a normal cyclical recovery. In fact, on a long-term trend basis, mall fundamentals were steadily deteriorating owing to oversupply — just as the Amazon e-commerce cyclone was hitting its stride.” 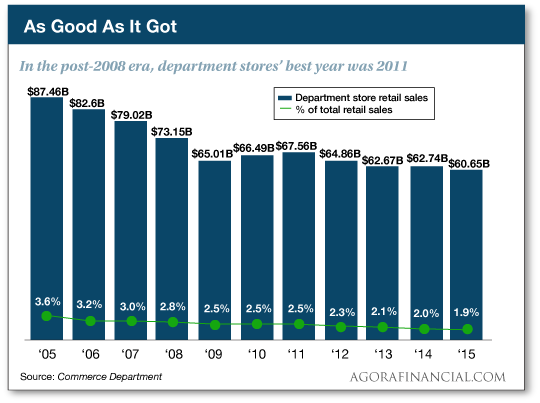 There’s still hay to be made from the retail apocalypse. More rotten earnings eggs are sure to emerge in the next few days. But earnings season is winding down and the window of opportunity to parlay retail chaos for life-changing gains is about to close. If you haven’t paid heed to David’s warning — and seized on the resulting opportunity — here’s what might be your last chance.

As the day grinds on, the Dow is still down about 250 points… but holy moly, look at gold.

As we wrote to you early yesterday morning, the Midas metal was still mired around $1,233. As we write approaching lunchtime today, it’s $1,257. And that’s strong fundamental demand, not just dollar weakness; the dollar index is down only a half-percent or so at 97.7.

Bonds are rallying even harder than gold, pushing yields down. The yield on a 10-year Treasury is back to 2.25%. A week ago today it was above 2.4%.

Crude is hanging in there at $49.30 after the latest inventory numbers from the Energy Department.

Hobbled as Trump might be politically, he does still have the power to appoint a new chair of the Federal Reserve. But it won’t be someone with a drain-the-swamp mindset.

Despite Trump’s stream-of-consciousness jawboning last month about reappointing Janet Yellen, our Jim Rickards says the inside track still belongs to Kevin Warsh — a financier who served on the Fed’s Board of Governors from 2006–2011.

“He is currently an adviser to the family office of hedge fund legend Stan Druckenmiller,” Jim tells us. “In turn, Druckenmiller was for many years the head trader for George Soros. Warsh was also on the steering committee of the Bilderberg Group, so his global elite credentials are impeccable.”

So why does Trump want him? “Part of the attraction for Trump is that Warsh is a lawyer, not a Ph.D. economist,” Jim goes on. “He is likely to be much more practical and much more in touch with markets than academics like Bernanke and Yellen, who conduct monetary policy as if it were a science experiment and we were all lab rats.”

Look for Trump to nominate Yellen’s replacement by November — because Yellen’s term is up at the end of January.

It’s a little early in today’s episode to dip into the mailbag, but “I am surprised you have no comments on the just-completed Belt and Road Forum in Beijing,” a reader writes.

“The future is sure pointing to the East. The East is building and the West is destroying! With Russia and China accumulating gold at a record pace, is a gold-backed Eurasian currency in the works?

“You are reading more like MSM with all the goofy subjects you are starting to report on.”

Gee, we had comments on Wednesday and Friday last week in the run-up to the meetings — including Jim Rickards’ prescient remark that it’s “one more sign of the coming decline of U.S. power and the U.S. dollar. China would happily conduct commerce with no dollar intermediation at all. China cares only about its own currency… and gold.”

Now the event has now come and gone. It was mostly a ceremonial thing. The nuts-and-bolts decisions about the construction of all those roads and rails and ports and pipelines stretching from Shanghai to the European continent will be made at future meetings, in less splashy venues.

Still, we were struck by the words of Chinese President Xi Jinping: “We have no intentions to meddle in the internal affairs of other countries via bringing our social system and the development model, or by imposing our will [on other nations].”

Xi’s remarks remind us of the “invest not invade” thesis of our one-time colleague (and old China hand) Neil George.

China has precious little history of invading its neighbors. “The idea that after 5,000 years of history, China’s all of a sudden going to start grabbing land with guns — it’s just not part of the business model of the country’s management,” he said. “Rather than invading around the world, China invests.”

It’s true, some of the financing arrangements resemble the “economic hit man” tactics used by the United States. But we’d be shocked to see China start to carry out “regime change” against leaders who decide they don’t want to play ball.

Or as Adam Garrie writes at the pugnacious website The Duran — an interesting place to find criticism of Washington’s empire — “Those in the West who are laughing at the One Belt–One Road project ought to remember that if China used the same bully and intimidation tactics as the World Trade Organization, things would be quicker. But… China understands that patience and cooperation eventually pays greater dividends than the sledgehammer techniques of economic imperialism pioneered and still effectively used by the West.”

As for a gold-backed currency in the 21st century, the nation first to the post might turn out to be… Zimbabwe?

Yes, the country that gave new meaning to the word “hyperinflation” in 2009… 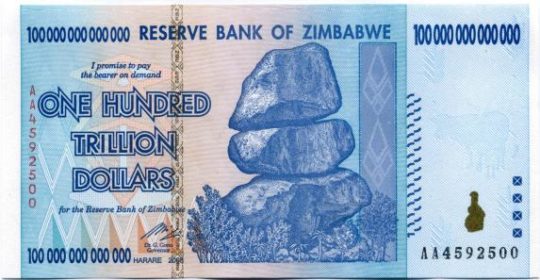 … and has relied on the U.S. dollar and other currencies since, is “working on a plan to establish a gold reserve set to anchor the introduction of a local currency when the right time comes for the return to the Zimdollar,” according to the state-run newspaper The Herald.

“This comes at a time when the country is grappling with cash shortages and economists believe the issuance of a gold-backed local currency would help stimulate economic activity.”

Where would the gold come from? The Zimbabwe government does own some gold mines, although they’ve been shuttered in recent years for “lack of capital,” says The Herald — which we’re guessing is code for socialist mismanagement.

“Dave, that’s a great point,” writes one of our regulars about fraud in subprime auto loans — shades of mortgage fraud a decade ago.

“In his book The Big Short, Michael Lewis quotes Dr. Michael Burry (one of the story’s protagonists): ‘It is ludicrous to believe that asset bubbles can only be recognized in hindsight. There are specific identifiers that are entirely recognizable during the bubble’s inflation. One hallmark of mania is the rapid rise in the incidence and complexity of fraud.’

“The auto loan market may be smaller than the mortgage market. Likewise for student loans. But Wall Street’s ability to continually fleece us with subprime lending on multiple levels is major red flag!”

“Sorry, Dave, but you shot to hell your credibility when you quoted Pearson’s nitwit statement regarding the mortgage loan fiasco a decade ago,” writes another.

“In 2008 I had been a real estate broker for exactly 40 years and had participated in thousands of loan transactions, and Pearson’s ‘small mortgage originators’ cheating had almost nothing to do with that mess.

“Ignorant and snobbish crap like that is exactly why people like me are finally fed up and voted for Trump.

“Thanks, that felt damned good.”

The 5: Aw, c’mon… Rick knows full well the rot existed at all levels of the system.

It could easily blindside Wall Street again for the third time in a week.

But it could also hand major gains to the farsighted who heed David Stockman’s latest retail warning. Will you be among them?