The Fed Smashes Several Records at Once 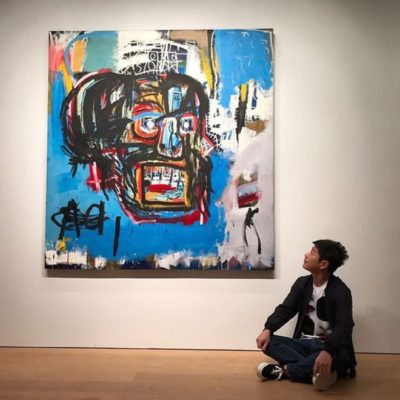 An untitled painting… and the fellow who just ponied up $110.5 million to buy it [he posted this photo on Instagram]

Last night in New York, Sotheby’s auctioned off this untitled painting by the late artist Jean-Michel Basquiat. The winning bid of $110.5 million was submitted by “fashion entrepreneur” Yusaku Maezawa — ranked the 14th richest person in Japan.

Among the records this sale set…

“No way this bid would have been made without the help of the Fed money pump,” points out the economics blogger Robert Wenzel. Since Basquiat painted the work in 1982, the “M2” money supply has ballooned from $2 trillion to $12 trillion.

“For privacy reasons, I can’t reveal his real name,” says our Zach Scheidt. Zach is at the MoneyShow Las Vegas this week — a massive event sprawling over much of Caesars Palace.

And while the place is packed with mom and pop investors, it’s also a chance for investing pros to rub shoulders and trade scuttlebutt. “The conference gives me a chance to chat face to face with hedge fund and family office portfolio managers, entrepreneurs and fellow individual investors,” says Zach.

Which brings us to the fellow with the $10,000 gold forecast. For our purposes today, Zach will identify him as “Mr. Gold.”

“This guy is the real McCoy of mining — and a proven winner at predicting BIG moves in gold. In 2007, he was featured on CNBC to give his opinion on gold prices. At the time, gold was trading for $637/ounce. He predicted gold to go over $1,000/ounce in a 12–24-month period. Of course, he was right!”

“Do you want to turbocharge your gold profits this year?” Mr. Gold asked Zach on the sidelines of the conference.

“I’m serious! Do you really want to make the most of what’s going to be an explosive rally in gold?”

“I think silver is the buy of the century!”

Mr. Gold’s reasoning is that silver is not only a precious metal but also an industrial metal.

“Silver has uses in the technology, medical and even energy and construction industries” Zach explains. “So as an economy grows, the demand for silver increases.”

There was a time when conventional wisdom said industrial demand for silver would wane as traditional photography went digital. Instead, the opposite has happened: Silver is needed for all manner of electronic gadgets, to say nothing of solar panels. Both are proliferating, even in an economy that’s been feeling punk for years.

“Silver prices typically trade alongside gold with a specific ratio,” Zach explains. “One ounce of silver is usually worth somewhere between 1.2% and 3% of the value of an ounce of gold.” 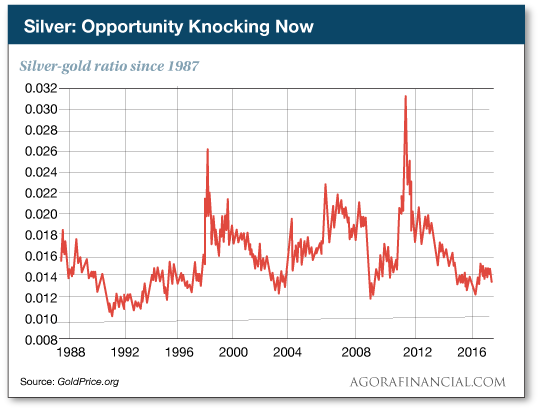 “Lately,” Zach goes on, “the value of silver (compared to gold) has fallen to a low level compared with history. But the trend is now reversing. Meaning silver should rise much faster than gold. In fact, if silver moves back toward the top of its range, the price of silver could move twice as fast (in percentage terms) as the price of gold.

Around here, we like plain-vanilla Silver Eagles — one-ounce silver coins from the U.S. Mint. You’ll find them at any coin shop. If you’re a newbie, don’t allow yourself to get talked into buying older collector coins at a huge markup; stick to plain-vanilla Silver Eagles at a modest premium over the spot silver price — which this morning is $16.81.

[Ed. note: Precious metals in your hand are always a good thing… and mining stocks can be valuable, too.

But no precious-metals strategy is complete without the instant-income “Cash FROM Gold” technique Zach and our team have refined over time. Just a 1:42 video clip will show you how easy it can be. Please note: For reasons you’ll see when you click, this video comes offline at midnight this coming Monday night.]

And almost all the movement came on Wednesday with the “OMG no Trump tax cuts” wave of fear and loathing. This morning, the Dow is up half a percent at 20,778 — still off 200 points from where it began the week. Gold rests at $1,253 — a nice $20 bump from the start of the week.

The U.S. dollar index has sunk to 97.2. All its gains since Election Day are now gone.

Another crack in the subprime auto loan edifice: More borrowers appear to be figuring out how to game their credit scores.

Or so say analysts at UBS, who conducted a survey and found up to one in five borrowers fessing up that their loan applications weren’t 100% accurate. In addition, there’s been a measurable increase in internet searches for “credit score.”

Curiously, credit scores are the one thing that hasn’t changed amid the surge of auto loans in recent years. “Everything but credit scores has been eased in lender underwriting,” UBS strategist Matthew Mish tells Bloomberg. “Loan terms are stretched out, interest rates are aggressive, but there may be an over-reliance on credit scores, and that’s the danger.”

Result: The estimate we mentioned on Tuesday — how up to 1% of auto loans might be fraudulent — is likely understated.

On the science-and-wealth beat, Ray Blanco reports meaningful progress on a drug he says could be “the Nexium of constipation.”

Nexium generates billions in prescription drug sales every year for a problem people once treated with over-the-counter products — heartburn.

For two years, Ray’s been following the fortunes of a company with similar potential to treat a problem further down the digestive tract. This constipation drug is now on the market, and sales are moving up nicely.

“The leading competitor’s drug, Ironwood’s linaclotide, mimics a molecule found in the bacteria responsible for traveler’s diarrhea,” Ray tells us. “Data show that it often works a little too well.” Eek…

The new drug is a little more fine-tuned, imitating the body’s own natural processes that, uh, keep things moving along the way they should. “I expect that a safer drug that is equally effective will eventually beat out the competition,” he wrote his FDA Trader readers this week.

By the way… Ray’s latest cancer-treatment pick, mentioned here on Tuesday, has already zoomed up 22% since his recommendation — after publication of a promising research abstract. For the moment it’s higher than his buy-up-to price. But there’s another cancer-fighting play he believes has even more potential. Check it out here if you haven’t already.

“I’m curious about the response to a sales pitch that matched your other content in quality and brevity,” a reader writes — picking up where we left off yesterday on the contrasting tone between our editorial content and our promotional copy.

“Yesterday’s reader accurately articulated my thoughts. I’d be much more likely to click on an ad that said,

‘Opportunity for x–y% returns in the w space. [Brief description of opportunity and why you have the investment advantage]

“To be honest, I’ve stopped reading your advertisements, as they take too much time to process. Just trying to be helpful. If it wasn’t for watching Jim Rickards on YouTube, I wouldn’t have followed up on your sales pitch. You catch what you fish for.

“Thanks again for the work you do.”

We’ll leave it to one of our longtimers to answer his fellow reader’s question: “Would you or I honestly click if the headline read, ‘Here’s a Mildly Interesting Anecdote About Obama’? Or how about, ‘Here’s a Stock That Might Hit Average Returns’?

“Same with the news. If it bleeds, it leads. If it’s a whole nation bleeding, so much the better. That is why I don’t watch TV news from any channel. It is toxic!

“However (two ‘but’ days in a row), it may make more sense for Agora to look at its churn with this type of marketing. I mean, how many of these folks who click this stuff actually stay as customers once they do get some deep research from one of your analysts?

“Yes, I know, you got me, but (does that count as three ‘buts’ in a row?) initially I found you because one of your analysts was recognized as No. 1 by the now defunct Hulbert publication that ranked the returns of all newsletters, NOT through one of the clickbait ads.

“That research was so excellent that I continued signing up for your other newsletters until I did the quick math that it was far more economical to just become a Platinum Reserve member.

“Love The 5, but (wow, a new record) I love the research, analysis and real news I get from my Reserve membership even more. The fact that I can pass it on to my kids makes it even more valuable!”

The 5: Thanks. We have people at our Baltimore headquarters who spend most of their workday analyzing refunds, customer retention — all that good stuff. It is anything but an afterthought, we assure you!

As for the length of the sales pitches, which is another common complaint: Direct marketers have spent decades testing “long copy” versus “short copy” — going back decades before the dawn of the internet. Long copy wins nearly every time.

Oh, and thanks for the affirmation that you find value in The 5 even though as a Platinum Reserve member you already have access to darn near every paid financial newsletter and trading service we publish.

P.S. We don’t make as big a deal about the Platinum Reserve as we once did. But it still exists, and it’s hands down the best value available if you like the research we do.

For a one-time membership payment (plus a minimal annual maintenance fee), you get lifetime access to nearly all of our paid financial publications.

No, an all-you-can-eat buffet isn’t for everyone. But if you join up and find that a half-dozen or more emails every day is too much, you can call our VIP team and they’ll custom-tailor your membership to the topics and publications that interest you most.