We Slay One of Wall Street’s Most Destructive Myths

On this second day of summer, it’s time to do a little market myth busting. Break free of one pervasive Wall Street myth and you could be on your way to a small fortune before 2017 is over.

By the same token, “Hershey doesn’t rally every Halloween, even though it sells more candy.

“Nothing in the stock market is that easy. The gigantic firms involved in daily trading snatched away those kinds of super-obvious opportunities for themselves long ago.”

Maybe you already know that intuitively. But there’s still plenty of hokum propagated by market pundits about a phenomenon called “seasonality.”

“It’s in human nature to wonder about market seasonality,” Jonas allows. “Investors have been wondering about seasonal rhythms in markets for centuries. And it makes sense that stocks might have specific time periods when they’re more likely to rally.”

But Jonas says 99% of investors are going about it the wrong way… and end up losing money.

“Most people searching for seasonal patterns are looking for the wrong things,” says Jonas.

“For instance, Wall Street is fixated on trying to predict news events. They pour 99% of their research budgets into trying to figure out how big earnings will be this quarter or when the FDA will approve a new drug or what the crop harvest will look like this year.

“They ignore all of the price data generated every trading day in between those big events on the calendar.”

Now you might wonder, “So what? Who cares about what happens in between those big events?”

Ah, but that’s where you can really start making money.

To illustrate the point, Jonas uses an example far, far away from the stock market.

“Imagine you’re looking at the patterns in energy output at a power plant. You’re trying to forecast how much power the plant will produce. When you pull up a chart of the output, it might look something like this: 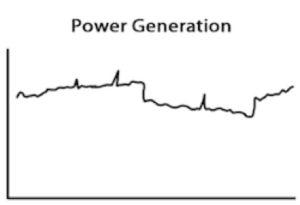 “My sketch is a little crude, but you get the idea. Clear trends, with occasional event-driven spikes and surprises interspersed in the data.

“The spikes could be caused by anything — a shift change for plant workers, suddenly losing a power generation contract, whatever…

“The funny thing is that Wall Street spends all of their time trying to guess those unpredictable events,” says Jonas. “Meanwhile, they ignore the predictable stuff.”

Jonas uses the power plant example to illustrate the following point: “What if the important stuff were really all the price action in between earnings announcements, product launches and flashy merger deals that nobody pays attention to?

“Filter out the news blips and there are time periods when price action becomes highly predictable… rhythmic, even.

“The mathematical rhythm in the markets isn’t caused by the repeating events that happen every quarter — it’s caused by human behavior and the trillions of stock trades that happen each year.”

Yesterday we told you how at the start of the year, Jonas had run all the price blips on the SPDR Gold ETF (GLD) going back to its launch in 2004. From there, he discovered GLD has two “Kinetic Windows” each year when gold is most likely to rise. And the second window starts tomorrow.

Buy gold tomorrow and you’ll be a happy camper when the window closes on Sept. 22.

And that’s just one small sample of how his system works. For a more thorough introduction — and a glimpse of its immense profit potential — you’ll want to check this out right away.

It’s a ho-hum day for the major U.S. stock indexes — all in the green, but not by much. At last check the Dow industrials are at 21,434 — roughly 100 points below their record close on Monday.

Gold has recovered the $1,250 level, if barely. Crude tumbled to a 10-month low after we went to virtual press yesterday, but as we write a barrel of West Texas Intermediate has stabilized at $43.15.

The big economic number of the day is the Conference Board’s leading economic indicators. They’re up 0.3% for May, but April was revised down. Most of the 10 indicators were up — except building permits, which were down, and manufacturing hours, which were flat. “The latest results point to steady but no more than moderate economic growth,” says a Bloomberg summary.

On the other hand, another interesting economic barometer just registered its weakest reading since early 2010.

The Philadelphia Fed state coincident index crunches four job numbers from all 50 states. It runs on a scale from minus 100 to plus 100. Readings of plus 50 and below have called the onset of every recession going back to the Reagan years… and the new number for May was 58. That’s down from 88 only two months earlier.

We caution that these numbers tend to be revised over time as more data come in. But we’ll have a keen eye out for next month’s report…

With money coming out of the “Big 5” stocks in the S&P 500 these last two weeks, we now know where that money’s going — biotech.

Apple, Alphabet (Google), Microsoft, Amazon and Facebook have been mostly laggards since Goldman Sachs issued a downer of a report on June 9.

This week, “biotech is blowing every other sector out of the water,” writes Greg Guenthner in today’s Rude Awakening.

For sure: Since Monday the Nasdaq Biotechnology Index has leaped from 3,050 to [checking our screens] 3,375. Biotech is the first group of stocks to gain momentum since the Big 5 began dominating the market at the start of the year. “It proves that investors have an appetite for stocks other than Apple and Amazon,” says Greg. “That’s a good thing. We want to see market rotation.

“A healthy bull market is like a relay race. When market-leading industries and sectors become overextended, traders will move on to the next hot group of stocks.”

Two steps forward, one step back for U.S. marijuana legalization.

The decree “effectively eliminates the criminalization of the medicinal use of cannabis, THC, CBD and all cannabis derivatives, as well as legaliz[es] the production and distribution of cannabis for medicinal and therapeutic uses,” says an account at the cannabis website Leafly.

Peña Nieto was once a hard-core drug warrior, but he’s had a change of heart. Last year he told the United Nations General Assembly, “We must move beyond prohibition to effective prevention.”

Meanwhile, former President Vicente Fox told a cannabis industry conference in Oakland this month that Mexico won’t take a back seat to the United States and Canada when it comes to the nascent market for legal pot exports.

Hmmm… That should open up the possibilities for big moves in penny pot stocks even wider.

“But I wonder if it has been back-tested in BOTH up and down markets.

“I watched and listened to the entire video presentation. It was mentioned the back-testing period covered the past eight years.

“Of course, over the past eight years the market has generally been in an uptrend.

“Could this strategy maybe be tweaked to where uptrend and downtrend signals could be generated on indexes and both upside and inverse ETFs be traded?”

The 5: “This strategy absolutely works in both up and down markets,” Jonas responds.

“It works best when you have a large number of assets to invest in — that way, you’re more or less guaranteed to see a K-Sign in one of them regardless of market conditions. That’s why our possible universe currently includes 1,683 individual stocks.

“The system does the hard work of picking out the one stock from that massive group that’s sending a buy signal at any given time.

“Our back tests actually went back more than a decade, but we focused on the stats from the last eight years because those market conditions are most similar to the ones we’re experiencing today.”

That said, the K-Sign strategy works extremely well in down markets too.

“The average K-Sign trade actually made money in 2008,” says Jonas — “but only 25 stocks actually signaled a K-Sign that year. Of course, that’s more than enough action for most investors.

“As far as downtrend signals go — yes, that’s something I’m looking at very closely. I suspect that bearish signals in our proprietary indicator would be very profitable to bet against, but my gut feeling isn’t enough. To actually trade it, those signals have to produce statistically significant results in a full back test. In the meantime, we have plenty of evidence that our strategy makes money in the worst market conditions possible already.”

Hope that answers your questions. Once again, here’s our introduction to how K-Signs work.

P.S. One more reminder: Gold enters a new “Kinetic Window” tomorrow. Buy tomorrow and you stand an 83.5% shot at bagging a gain when the window closes after three months.

Meanwhile, Jonas’ proprietary computer algorithm just spat out a new K-Sign on a pharma stock. You can be among the first people on the planet to profit from this revolutionary trading system we’ve unveiled just this week.

You don’t have to be glued to a desk all day waiting for K-Signs to buy and sell. These trades play out over a course of weeks. All you have to do is wait for Jonas Elmerraji’s alerts.

And the system finds winners with 93.5% accuracy.

Want to learn more? Here’s where to go.