A Staggering Sum of Money, Daily

“Trading in currencies,” he went on, “can now be more rewarding to banks than the conventional business of brokering loans from savings.”

What’s striking about this passage is that it’s not recent. He wrote it in 1982 — in a book called The Case for Gold that we republished for a 30th anniversary edition in 2012.

At the time Dr. Paul wrote that, currency trading was barely a decade old.

Once Nixon chucked that arrangement out the window, all those currencies started to “float” against each other. Wall Street quickly spied an opportunity to seize on the ever-shifting value of one currency relative to another.

Here in 2017, about $5.1 trillion changes hands in the currency markets every day — according to the Bank for International Settlements.

As author George Gilder pointed out in a recent Op-Ed for The Dallas Morning News, that $5.1 trillion figure is “25 times global GDP and 73 times all trade in goods and services.”

Back when Dr. Paul penned his book, Wall Street accounted for 20% of corporate profits. Nowadays, it’s 30%, “mostly through the shuffling of currencies and derivatives,” Gilder writes.

It’s just the financial industry moving money around… and taking its generous skim, naturally. None of it grows more food or pumps more oil or builds new factories.

It’s all madness… but there’s no reason you shouldn’t be able to profit from it.

From that $5.1 trillion changing hands each day, Wall Street takes a $477 billion skim.

There’s no reason you shouldn’t claim some of that skim for yourself… and Jim Rickards has identified the easiest way to do it, hands down.

You don’t have to enter the wild-and-wooly currency markets to do it, either. (That’s for pros only.) As long as you have an online brokerage account and five minutes a week, this enormous market is wide open for you.

Learn how much you can make and how to get started when you follow this link.

The major U.S. stock indexes are going nowhere fast as a new week begins. As we write, the Dow has recovered the 21,400 level… but the Nasdaq has slipped below 6,250.

Treasury prices are rising, pushing yields down. The 10-year yield is down to 2.13% — a level last seen shortly after Election Day.

Gold is selling off — taking a 1% dive shortly after trading opened in London this morning. At last check the bid is $1,243. That’s roughly a six-week low, but the drop is not alarming from the standpoint of gold’s Kinetic Window explored here last week; there will be ups and downs over the course of the next three months, but on balance, gold is likely to register a meaningful gain by Sept. 22.

The big economic number of the day laid an egg. Durable goods orders came in below expectations, down 1.1% for May.

If you factor out transportation goods — aircraft orders tend to be highly volatile — the number is still below par, a 0.1% increase.

And the “core capital goods” figure — which excludes aircraft and military hardware — looks awful, falling 0.2%. The “expert consensus” among dozens of economists polled by Bloomberg called for a 0.5% increase.

Bloomberg  didn’t even try to apply lipstick to this pig, as it often does: “The capital goods readings are a tangible disappointment for the second-quarter outlook, pointing to lack of confidence in business prospects.”

The wireless industry’s transition from 4G to 5G technology is happening faster than anyone expected — other than our Louis Basenese.

“5G networks promise to offer 10–100 times faster data speeds and lower latency,” Louis explained to his readers early this year… and he made a stock recommendation based on 5G’s promise.

“This recommendation,” he says now, “flew in the face of conventional wisdom, because most analysts believed any 5G deployments, and therefore any real profit opportunities, wouldn’t start until next year.”

But as it turns out, Verizon will give 5G a trial run in 11 U.S. cities this year. And AT&T won’t be far behind. Meanwhile, “China’s telecoms are preparing to spend a combined $411 billion on building out 5G networks,” Louis tells us. 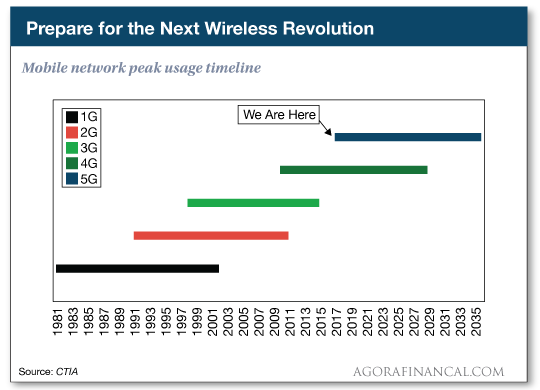 As you can see from the chart, 4G will be with us for another decade. But 5G is coming on strong. Louis’ 5G-themed recommendation in True Alpha is already up 36%, and he says more gains are to come.

[Ed. note: Tomorrow, Louis will take the wraps off a project that’s taken up 12,480 hours of his time. He’s identified a remarkable subniche of stocks in which a 1,000% gain in 24 hours is considered an underachiever. Watch this space…]

Hmmm… For the moment, bailouts still rule the day. Not bail-ins.

Over the weekend, the Italian government bailed out two banks in the Venice region. Italian taxpayers will be on the hook for at least $5.8 billion… and could be stuck with a $19 billion tab before all’s said and done.

“Those who criticize us should say what a better alternative would have been. I can’t see it,” said Economy Minister Pier Carlo Padoan.

It’s interesting the government didn’t opt for a bail-in — converting deposits over, say, 100,000 euros into shares of the ailing banks. That’s what the European authorities did in Cyprus in 2013, because taxpayer bailouts got a bad name during the Panic of 2008. Jim Rickards has long said bail-ins will be the template for the next global financial crisis.

For reasons anyone has yet to clarify, the Eurocrats decided these two banks weren’t “systemically important,” thus a bailout was still OK. Whatever…

Lawyers gone wild: Two of the big home-improvement chains are being sued for selling 4-by-4 lumber boards that are in fact 3½-by-3½.

“Defendant has received significant profits from its false marketing and sale of its dimensional lumber products,” says the Menards suit.

[We swear we didn’t get this from The Onion. It’s in the Milwaukee Journal Sentinel. Menards is based in Wisconsin.] 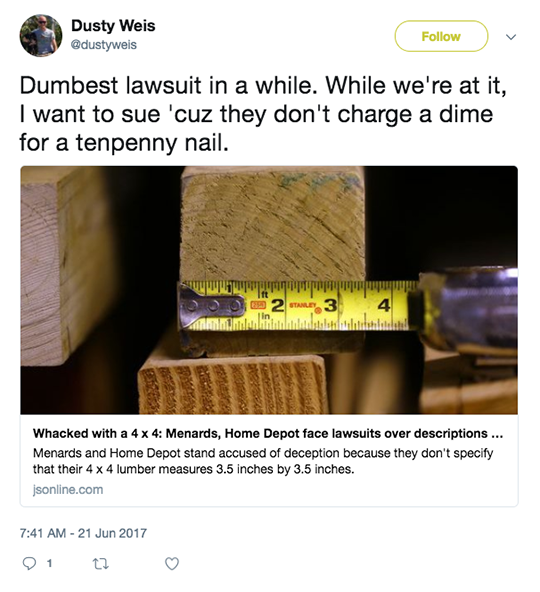 “Plaintiffs received exactly what they were supposed to receive — lumber that complies with applicable standards,” Menards replies in court papers.

“They haven’t measured 4 inches by 4 inches since the ’50s,” Menards customer Scott Sunila tells the newspaper. “My God, that’s crazy. Let me on the jury. They ain’t winning. And they’re gonna pay me extra for my time.”

To the mailbag: “I have read one economics pundit declaring we are heading for deflation, which he says will cause the dollar to increase in value and could then send gold to $700 an ounce.

The 5: Lawdy, people keep asking, so I guess we have to keep answering.

Here’s what Jim Rickards said in The 5 last summer. “Deflationistas like Harry Dent and Gary Shilling see deflation getting the upper hand over inflation because of demographics, technology and deleveraging.

“They’re right about deflationary forces, but they underestimate the capacity of governments to force inflation in the end.

“The elites have no choice. Deflation makes the real value of debt go up and destroys tax collections (when prices and wages go down in deflation, government collects less tax). If the value of debt goes up and tax collections go down, the entire house of cards starts to collapse. Governments can’t allow that. They must have inflation, and they will get it.”

“Gentlemen,” a reader writes, “I get so tired of all the complaints about the long entertaining sales copy.

“Then I page down and hit the link for the sign-up page to see what it might cost me. If I think the price is right now, I can decide if I want to go back and review all the information.

“I don’t find this difficult or time-consuming.

“Sometimes I just watch the video for the info and entertainment.

“Geez, all you complainers quit your b*tchin’.”

“As a lifetime subscriber on a number of your subscriptions and a retiree with limited resources,” writes our next correspondent, “I have to ask whether Rickards’ Gold Speculator subscribers are missing opportunities for some gold trades available only via Jonas Elmerraji’s K-Sign strategy.”

The 5: Different editors will inevitably take different approaches to their recommendations. Not everyone on our team will be open to adding K-Signs to their screening process.

That said, there’s a terrific online tool available to all Kinetic Profits subscribers. You can tap into the proprietary Archimedes quantitative platform… and plug in the ticker symbol for any one of thousands of stocks and ETFs. Immediately, Archimedes will generate a chart showing you when the next Kinetic Windows will occur in that security. (I’ve tried it; it’s a blast.)

So — and this is just one possibility to consider — let’s say you’re on the fence about a Jim Rickards or Zach Scheidt or Louis Basenese recommendation and you’re also a Kinetic Profits subscriber. You can plug the ticker symbol into Archimedes and see if there’s a Kinetic Window coming up. If there is, that can reinforce your decision to buy… or maybe hold off a few weeks until the Kinetic Window kicks in. Just a thought…

P.S. As always, we can’t offer personalized investment advice. But we’re pleased to offer access to Archimedes as one more tool you can use to manage your portfolio.