Uh-oh: Canada is facing a marijuana shortage — only one year out from when recreational cannabis becomes legal.

From the New York Post: “Vancouver-based Lift, a marijuana media platform in Vancouver, estimates Canada’s cannabis industry has enough funding to boost production to between 400,000 and 500,000 kilograms a year.

“But Lift CEO Matei Olaru told The Post the demand for pot is expected to reach 655,000 kilograms during the first year alone of across-the-board legalization.”

Can’t say we didn’t see this coming: As we pointed out back in the spring — when Canada’s legalization plans were coming into view — Canadian cannabis will be subject to a regulatory crazy quilt: Producers will be licensed at the national level. But distributors and sellers will be regulated on the provincial level… and the provinces will also be able to control prices.

Oh well. Regulatory hiccups aside, the legalization train has left the station. Between Canada and California, recreational weed becomes legal next year for 21% of the combined U.S. and Canadian population.

Meanwhile, penny pot stocks are on the verge of something big — judging by Agora Financial’s proprietary Penny Pot Index… 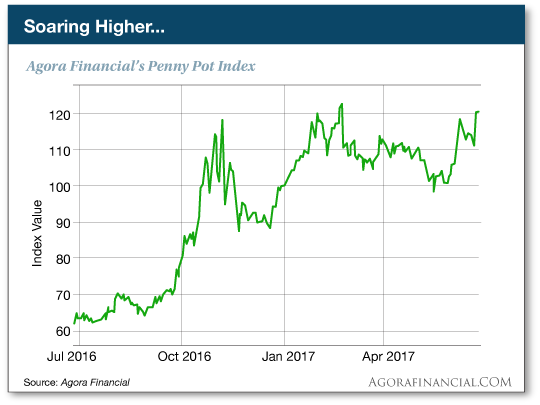 “A push through 120,” says Ray Blanco, “would be a major technical buy signal — one that I believe will set off a chain reaction of buying opportunities in the pot space.”

But just what is the Penny Pot Index, anyway?

“It’s our proprietary stock market index that tracks a basket of actively traded pot stocks,” says Ray. “The index gives us a quick way to spot important trends across the pot stock space.”

We share it in The 5 once in a while. But readers of Ray’s premium advisory Penny Pot Profits can access an interactive chart of the index 24/7.

At present, the index is made up of 28 actively traded pot stocks. “These 28 stocks are a soup-to-nuts representation of the legal marijuana market,” Ray explains. “The stocks we’ve selected include everything from manufacturers of marijuana growing equipment to marijuana growers and dispensaries to biopharmaceutical companies developing cannabinoid-based therapies.”

Sorry, we can’t disclose which stocks go into it. Trade secret. “We don’t want competitors to be able to reverse-engineer our index,” Ray goes on. “And since the stocks in the index are the same ones that our trading system looks for buy signals in, we don’t want anyone outside of our group to know which stocks we’re looking at specifically.”

The makeup of the index is revised quarterly. “The cannabis stock market is advancing quickly,” says Ray — “and many new pot-related stocks are hitting the market all the time.”

[Ed. note: There are four open positions right now in the Penny Pot Profits portfolio. Only one is in the red, and only by 8%. Two of the picks came this month… and they’re already up by 22% and 81%.

If we’re on the verge of a breakout in the sector, that means even more lucrative possibilities just ahead. If you’ve ever thought about trading penny pot stocks, there might be no better time to get started than now.]

It’s a sleepy summer day for the U.S. stock market. The Dow and the S&P 500 have barely budged.

The Nasdaq, however, is down about a third of a percent; tech stocks are taking a hit after the European Commission came down hard on Google parent Alphabet — a $2.72 billion fine for favoring its own shopping service in search results.

Gold staged a steep recovery in overnight trading, though not as steep as the drop that came 22 hours earlier. At last check the bid is $1,246.

The big economic number of the day is the Case-Shiller home price index — up 0.3% for April. Whoops, the “expert consensus” was counting on a 0.6% increase. Worse, the March number’s been revised downward, big-time. This is the first report so far this year pointing toward weakness in home prices, despite tight supply.

A year after the “Brexit” referendum, Jim Rickards says the British pound has nowhere to go but down.

We pay heed to what Jim says on this score because of his spot-on call a year ago. When a majority of voters shocked the world by voting to leave the European Union, some of Jim’s readers bagged a 129% gain in only three days.

“Conditions appeared to stabilize in the months after the Brexit vote. Theresa May seemed like a capable prime minister. The negotiations to leave the EU would take years, and there seemed to be plenty of scope for compromise. The U.K. economy did a bit better, and some even hoped that the results of the Brexit vote might be reversed through the parliament.”

“Now those hopes have been dashed,” Jim goes on.

Overcome with hubris, May called a snap election in the spring — confident she could bolster her Conservative majority in parliament. Instead, she lost her majority in the June 8 election and only yesterday managed to cobble together a coalition with a party from Northern Ireland.

“The election results,” says Jim, “have strengthened the hand of the ‘hard Brexit’ members who threaten to pull the rug out from under May’s government if she does not take a hard line in the negotiations. The U.K. economy is slowing down, and it looks like a housing bubble may be about to burst.

“Meanwhile, in Europe, the success of Emmanuel Macron in France and the improved position of Angela Merkel in Germany have led to the strongest Franco-German cooperation in years on the key unfinished business of European integration.”

Result: “Investors are beginning to vote with their purses by switching from sterling to euros,” Jim concludes. “We expect this trend to continue with the euro rising toward $1.15 and sterling falling to $1.25 in the next few months. From there, things only get worse for sterling.”

The corner of the world that’s the most likely flashpoint for a nuclear war is heating up again.

On the Indian side of the line, “tit-for-tat violence between Kashmir separatist insurgents and Indian security forces is escalating again,” says a dispatch from Kevin Massengill of Rickards’ and Massengill’s Defense Technology Alert.

“It was just last month that India launched a massive house-to-house sweep in Kashmir, using 3,000 security forces to root out terrorists. Insurgents have responded with new attacks, including the beating to death of an Indian police officer. Now, Indian security forces are signaling that their patience has run its course, and a new ‘Operation All-Out’ is being launched.”

Gee, and at the very moment Prime Minister Narendra Modi is paying a call on the U.S. president… 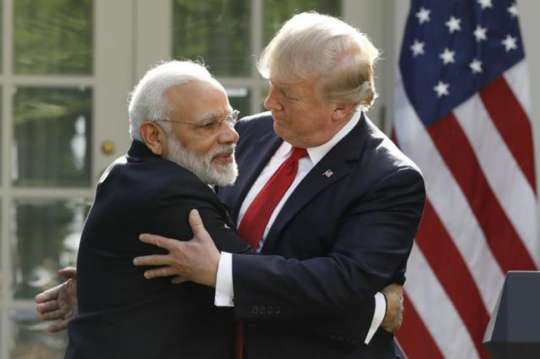 According to the Indian press, the militants just took delivery on a shipment of arms from China. China and India have their own border dispute, so China’s been a stalwart ally of Pakistan for decades. Hmmm…

Assuming the war doesn’t go nuclear — and let’s hope it doesn’t, because by one estimate it would kill 20 million people instantly and kill 2 billion more in a global famine — Kevin says the scenario is still grim. “The war in Kashmir would not be contained.

Small-business curiosity of the month… 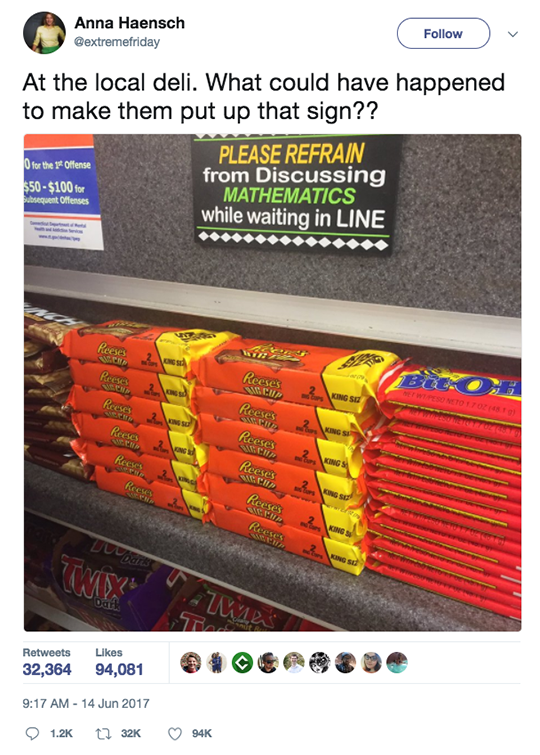 And with that, the Neon Deli in Middletown, Connecticut, became a viral sensation two weeks ago.

Anna Haensch, a math professor from Pittsburgh’s Duquesne University, is doing research this summer at Wesleyan University in Middletown and understandably did a double take when she saw the sign.

It turns out the sign was inspired by Ms. Haensch’s own Ph.D. adviser and his colleagues. “They were down there talking about math one afternoon, and the owner of the deli was trying to take the order from one of them, and he was a little bit too preoccupied with mathematics to fully engage in the sandwich ordering process,” Haensch tells Canada’s CBC.

“And they said then, ‘Please refrain from discussing mathematics while waiting in line.’ Just because it was kind of a joke. They wanted to speed up the ordering process. But Cynthia, who was the owner who was there that day taking sandwich orders, she is a good friend of the mathematics department.”

We’re impressed by the sign’s not-handwritten professionalism. Have you seen anything similarly odd where you are? Drop us a line — better yet with a picture attached. We can’t promise you’ll light up the Twittersphere, but you can furnish some summer-doldrums entertainment for your fellow 5 readers.

On the subject of the lumber litigation against Home Depot and Menards mentioned here yesterday, we got the following reader feedback…

“Those 4-by-4s are measured wet,” says one. “They shrink when they dry. And then they are planed for uniformity. It’s been that way my whole life.”

Says another: “If you want a board that is 4-by-4 inches, you order dimensional lumber.”

“So far, the K-Sign is a signal of DOOM!” says one of our crankiest readers.

“Please publish this! It is truly a chance to raise Agora Financial’s ethical standards!”

The 5: Aw c’mon, there are three months for the trade to play out. The Kinetic Window for GLD runs through Sept. 22.

This isn’t day trading-type stuff. In fact, that’s part of the idea — windows of opportunity that last for weeks or months so the reader doesn’t have to devote a lot of time or brainpower to them…

“K-Signs look like breakthrough research,” says another reader, “but ask yourself what can go wrong.

“For starters, think of all those cynical bastards up in New York who’d love to sink your breakthrough — for the simple reason you are smarter than them and they want to knock you down.”

The 5: The proprietary Archimedes trading platform is constantly recalibrating the Kinetic Windows and K-Signs. For instance, gold’s drop on Friday will be incorporated into the years’ worth of price data that determine when GLD’s Kinetic Windows will open next year.

If there’s a noticeable drop-off in the system’s win rate — currently 93.5% — rest assured Jonas Elmerraji will perk up and investigate. After all, a system is only as good as the gains it can generate for our readers.

P.S. As it happens, another K-Sign triggered this morning. Jonas Elmerraji has spied a trade with a 2-to-1 probability of being a winner… and profit potential of up to 128% over the next 83 days.

Want in? Or are you suspicious and wondering how the numbers are so precise?

Either way, here’s where to go.