The six-year sham known as the “stress tests” for the nation’s biggest banks has reached its absurd and inevitable conclusion.

The second round of the 2017 stress tests is now complete, with 34 firms under review. All 34 got passing grades — a first since the annual tests started in 2011.

The stress tests are one of the charades developed by the powers-that-be after the Panic of 2008, aimed at convincing the rubes they’d fixed the system. The Treasury Department was in charge of them the first couple of years, in 2009–10. So obviously shambolic were they that University of San Diego finance professor Frank Partnoy was moved to write, “There are two problems with the financial ‘stress tests’… First, they weren’t stressful. Second, they weren’t tests.”

Then the Fed was put in charge starting in 2011. You can be forgiven for thinking the fix was still in — the Fed passing judgment on its own member banks.

The practical result of the stress tests is that the banks now have permission to raise their dividends and buy back shares.

No sooner were the results announced after the market close yesterday than Bank of America said it would raise its dividend 60% and buy back up to $12.9 billion of its shares. BAC stock is up more than 1% as we write this morning — on a day the market as a whole is selling off.

This is exactly the scenario our income specialist Zach Scheidt has been expecting all year. No longer do the banks have to sit on billions in “excess capital” — i.e., a big pile of cash for a rainy day. As he said here in The 5 in early February: “Banks will likely be able to better invest their own capital to generate profits. And more importantly, banks will be able to pay more of their capital to investors through dividends and buybacks.”

Thus Zach has been pounding the table for BAC and a couple of the other biggest bank stocks in the pages of Lifetime Income Report.

But what about the sensible objection that the too-big-to-fail banks have gotten only bigger since 2008? And that by reducing their cash pile, they’re only becoming more vulnerable?

As we said only yesterday, even a Fed insider like Minneapolis Fed chief Neel Kashkari recognizes the problem.

“I don’t expect to hold these banks stocks forever,” Zach tells us. “If the industry gets dangerous again, we’ll take our profits off the table and find new opportunities. But for the next two–three years, stocks of healthy U.S. banks are going to be some of the best income investments that you can find.”

[If you’re starved for income in a low-interest-rate world: Zach tells us that with Independence Day weekend approaching, now’s the time to claim your share of a $2.6 trillion cash pile under a Trump White House arrangement he cheekily calls the “cash for patriots” program. Click here and see why now’s the time to act.]

The sell-off in tech stocks is underway again, and that’s dragged the S&P 500 down more than three quarters of a percent, to 2,421.

But the hot money flowing out of stocks isn’t flowing into bonds. Treasury prices continue to fall, pushing yields still higher; the 10-year is now 2.27%.

Nor is money flowing into gold; the bid is down $6, to $1,243. And that’s not because of a strengthening greenback; the dollar index is down to another nine-month low at 95.8.

There’s no real market-moving news. Walgreen’s is abandoning its plans to buy Rite Aid — although it will still buy about half of Rite Aid’s stores. The Commerce Department’s third and final guess at first-quarter GDP is a weak but better-than-expected 1.4%.

About the only thing that’s up today is crude. A barrel of West Texas Intermediate is back above $45.

The White House and Congress are competing with each other to see who can goose the military budget the most.

The process started when the White House proposed spending $603 billion for fiscal 2018 — a substantial increase over this year.

Then House Armed Services Committee chairman Mac Thornberry (R-Texas) upped the ante, announcing plans to unveil a $640 billion bill. And when once the committee unveiled it, the total had risen to $696.5 billion.

Yesterday the Senate Armed Services Committee led by John McCain (R-Arizona) passed a $700 billion bill. Unanimously. The nagging question of how such a sum will be paid for was, uhhh, not addressed.

It’s still not too late to hop on the gravy train; most of the picks in Rickards’ and Massengill’s Defense Technology Alert are in the green, but with the budget growing, there’s more where that came from.

“Amsterdam on steroids” is one description we’re hearing about Las Vegas once recreational marijuana becomes legal in Nevada on Saturday.

“This is a game-changer for Las Vegas and tourism here as far as I’m concerned,” state Sen. Tick Segerblom tells the Las Vegas Sun.

Nevada was one of four states where voters approved recreational cannabis last November… and the state is wasting no time putting the rules into place. (California will have to wait another year.)

Five out of eight buyers in Nevada will be tourists, according to a report from Gov. Brian Sandoval’s office.

Now for a gold discovery that has nothing to do with mining.

We’re a bit tardy in reporting an amateur treasure hunter recently found a gold coin, four centuries old, at the bottom of the Yauza River in Moscow. According to the TV channel Moscow 360, it’s a gold ugorsky chervonets minted during the reign of Czar Boris Godunov, who ruled from 1598–1605. Estimated value: $17,000.

Finding the coin was a fluke. The diver was using a metal detector and came upon a metallic hinge lying deep in the riverbed. The coin was stuck to the hinge.

By one account, the coin was never used as money — only as a medal for military achievements. Perhaps that’s why only six of them have been found to date. 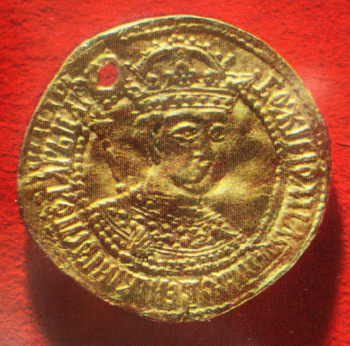 Now here’s the weird part of the story, as related by the state-run Sputnik News: “The lucky treasure hunter opted to remain anonymous, because per Russian legislation a person who engages in archaeological activities without proper authorization and inflicts damage to artifacts during the process may face a hefty fine and up to four years in prison.”

So how, exactly, does he plan to unload this coin when there are so few of them?

“Ya gotta love that picture of Kashkari sitting with fingers cupped between his legs,” a reader writes after our firsthand account of a town hall held by the Minneapolis Fed chief.

“His body language screams that there’s nothing of substance to what he says. Why, even a squirrel could see that!”

The 5: A postscript from that event: On the chair of everyone who came into the meeting room was a bag of shredded paper money… 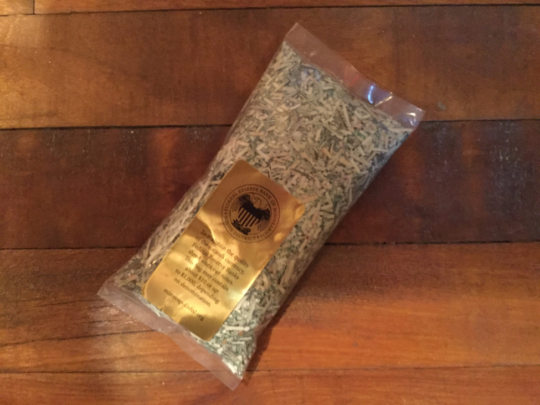 “To maintain the quality of the nation’s currency,” says the label, “Federal Reserve Banks shred worn-out notes. This bag may contain about $10 or up to $1,000, depending on denomination.”

Guess it depends on your definition of “quality.” Heh…

We’re sure most of the people in the room found it a curiosity. I found it a little chilling — a stark reminder that “fiat currency” can be both created and destroyed — rendered valueless by government diktat. That’s what folks in India learned last year when the government banned about 85% of all the bank notes in circulation, the better to get a handle on untaxed transactions.

Which reminds us: India’s government is about to embark on its next phase of corralling the people and their money electronically.

Effective Saturday, millions of small businesses in the country will be subject to a new goods and services tax. “Most say they need more help and more time because they don’t have the computers, the internet connection or even the basic knowledge of how much they owe,” says this morning’s Wall Street Journal.

Strikes and protests are underway, we’re told… but we don’t think much will come of it. There were riots late last year after people had to stand in long lines to turn in their suddenly banned bank notes. But during elections this spring in the largest state of Uttar Pradesh, the ruling party of Prime Minister Narendra Modi prevailed.

“Why do you continue to quote Jim Rickards?” a reader carps. “He has consistently misread the markets and predicted big increases for precious metals even though none of these increases has occurred.

“A very important part of predicting the market is timing, and his timing is consistently off completely. Find someone else.”

The 5: We’ve never promoted Jim as a “market timer,” certainly not when it comes to gold. His $10,000 gold outlook hinges on global elites reorganizing the monetary system — an event that is inevitable, but not necessarily imminent. And the penny gold stocks in Rickards’ Gold Speculator are long-term buy-and-hold propositions.

Shorter term there’s plenty of time for his forecast of $1,300 this summer to play out…

“With the many billions sitting in offshore piles of corporate cash,” a reader inquires, “do you see the Fed possibly urging Congress to declare a limited tax holiday on repatriating those dollars?

“Seems that this would be a pretty-good stimulus to the economy that could justify allowing another rate increase, which Jim Rickards is otherwise predicting will not happen in September, due to economic weakness (Fed still needs to raise rates before they can lower them).

“Repatriation likely couldn’t happen that soon anyway, but in general, do you see this tactic in the Fed’s repertoire? Or do you see a sudden abolition of cash and the massive flushing in of that offshore cash at present confiscatory tax rates? I’m not sure I’m seeing the big picture.”

The 5: Maybe we’ll see that dynamic once there’s more turnover at the Fed and some Trump appointees can push the repatriation idea during their speeches and congressional testimony.

Abolishing cash? That’s a wild card we can only be watchful and wary about. As we pointed out earlier this year, India’s cash ban was an idea hatched in part at the U.S. Agency for International Development…

P.S. Did you play it? This morning, readers of David Stockman’s Bubble Finance Trader were urged to take 162% gains on put options for O’Reilly Automotive, one of the big three auto-part chains.

David rightly anticipated O’Reilly was about to get squashed by Amazon’s aggressive entry into auto parts.

Not bad for a six-month trade. And David says Amazon is set to wreak even more carnage in retail. It’s not too late to seize on the phenomenon for similar profits.