Here’s a chart that confirms everything you suspected about Corporate America’s switch from traditional pension plans to 401(k)s. 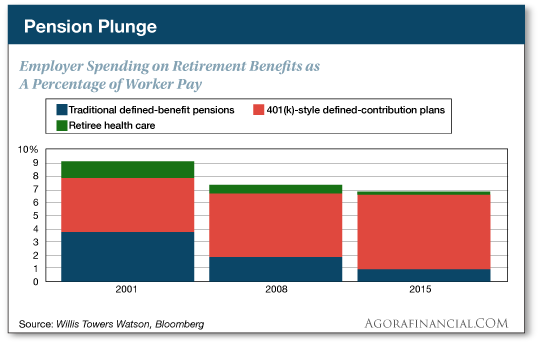 Granted, the chart doesn’t tell the whole story. Recently, some employers have begun boosting their 401(k) matching contributions. But that’s not cause for celebration.

Companies like Microsoft and Host Hotels are concerned that workers aren’t saving enough to fund their retirement. But they’re not kicking in a bigger 401(k) match out of the goodness of their hearts.

“Some companies in certain industries say they need to spend more to retain the best employees and motivate staff,” says The Wall Street Journal, by way of teeing up the real motivation…

“They also need to ensure that older, relatively expensive workers can afford to retire on time and make way for younger staff, retirement specialists said. Employees who don’t have adequate nest eggs will stay in their jobs longer and add to a company’s overall health care costs.”

Yup, if you’re lucky enough to get one of these ballooning 401(k) matches… that’s only because your employer wants you gone sooner rather than later so your sorry ass can be replaced with a healthy 25-year-old earning half your salary. The calculus is that a bigger 401(k) match is less costly than kicking you to the curb and risking an age-discrimination suit.

The Willis Towers Watson survey says employer spending on health care has doubled as a percentage of worker pay from 2001–2015.

But that’s only a reflection of rising costs. It’s not as if the quantity or quality of health care has doubled, right? And workers are have to kick in higher premiums and deductibles, too.

“Unfortunately,” says Bloomberg, “the rising cost of health care is hitting Americans twice. While they’re working, health costs are bleeding away their ability — and their employers’ ability — to pitch in for retirement. After retirement, unless current trends change, they face the daunting prospect of higher and higher medical bills.”

Little wonder then that according to another Willis Towers Watson survey, 76% of American workers agree that “my generation is likely to be much worse off in retirement than my parents’ generation was.”

We’ve been thinking about the state of American retirement lately in the context of a lucrative new trading strategy that can jump-start your retirement goals, courtesy of our newest contributor, Alan Knuckman.

Alan’s a 25-year veteran of the trading pits in Chicago. And thanks to the network of contacts he’s developed over that time, Alan recently became privy to a patent-pending tool that gives you the chance to trade on the backs of corporate insiders who — up till now — have had an advantage over the retail investor.

But to use it for maximum gains, it pays to follow Alan’s top three trading tips. Whether you choose to put his strategy to work or not, what follows should prove useful if you venture into the realm of short-term trading.

Yes, we know. Some readers refuse to touch options with a 10-foot pole. Or even an 11-footer.

But hear Alan out for just a moment: “It allows you to control your risk, control your probability and increase your payoff. It’s all about putting the odds in your favor. Think about it, options give me a better payoff while also not tying up all of my funds. It’s a no-brainer.”

It’s true. Yes, the option can expire worthless and you lose everything you put into it. That’s why you don’t bet the farm on an options play, no matter how attractive it looks. You put a small amount of money at risk in hopes of collecting a big reward. Which brings us to…

Tip No. 2: Spread your risk. “A major difference between professional traders and amateurs is allocation,” says Alan.

“Here’s my recommendation in just basic terms: You want to divide your account or your portfolio into 20 slices of pie.

“So in your account, each trade is only 5%. And of that 5%, you want to risk half. That’s a good rule of thumb that I use. Risk only half. And think about that for a second: Under that strategy the most you could ever lose if a stock pulls back is 2.5%. That’s how you set yourself up for success.

Tip No. 3: “Investors need to reward themselves,” says Alan.

“The reason you trade or invest is to make money. From time to time you need to reward yourself and remind yourself what that money means and what you can accomplish with it.

“Remember that you set your own terms. This is the world’s perfect business. You can make it fit your lifestyle by trading when you want to trade.

“Investing can be very, very difficult and very, very draining and costly on your life and your lifestyle. That’s actually why I chipped into options, because I wanted to spend time with my young daughter and take the time to do things with her. Now every summer I take her to softball, take her to wherever she needed to go.”

That’s an attractive lifestyle, no?

That’s the promise of Alan’s “7-Day Fortunes” trading strategy. Using the patent-pending tool to which he recently secured access, you can double or triple your money — or better — in the space of a week. And you can keep doing it as long as you like.

Follow this link and Alan will show you how this tool can jump-start your retirement.

The major U.S. stock indexes are taking turns reaching into record territory: Today it’s the Nasdaq, up nearly two-thirds of a percent as we write at 6,384. The Dow, in contrast, is nearly flat.

Crude prices have jumped to their highest since early June after the Energy Department’s weekly inventory report. A barrel of West Texas Intermediate is now 4 cents shy of $47.

The big economic number of the day is June housing starts — which surprised on the upside, and by a lot. Ditto for permits, which are a better indicator of future activity. Still, second-quarter activity is looking weaker than the first quarter.

Global wild card alert: The world’s two most populous countries are in danger of going to war.

Not that you’ll read it in the parochial American press, but China is gearing up for a “long-term confrontation” with India, according to the Chinese press.

The two nations fought a border war in 1962. India was humiliated and hasn’t forgotten. Now a different part of the border is in dispute. It’s controlled by India, but Chinese forces are conducting live-fire drills there.

Unlike 1962, both nations are now armed with nukes. Any shooting war now, no matter how limited, will throw markets worldwide into a tizzy.

Not that it’s a sure thing, but it’s on our radar…

“The repo man will be immensely busy in the years ahead,” says our David Stockman of the U.S. auto market.

Car buyers made up the difference by borrowing. “Financing for the average new vehicle during June amounted to $30,945, or 97.6% of the average purchase price,” says David.

As we’ve been saying since 2013, it can’t last. “Subprime” auto loans bear an eerie resemblance to the subprime mortgages of a decade ago. Delinquencies are already on the rise.

“As the tide of soured auto loans rises,” says David, “there will be more and more horror stories about wages being garnished and other court-imposed extractions from the hard-pressed households that were sucked into the auto finance Ponzi and, at length, defaulted.”

“Dave, I have never emailed but felt compelled,” writes a first-time correspondent, “and there will be no ‘but’ from me, only from Janet…

“6/27/17, Yellen at British Academy: ‘Would I say there will never, ever be another financial crisis? Probably that would be going too far… I hope that it will not be in our lifetimes, and I don’t believe it will be.’

“When I read that, it made me wonder what tripe Ben was saying before the 2008 crisis and I found the following:

“5/17/07: ‘We do not expect significant spillovers from the subprime market to the rest of the economy or to the financial system.’

8/31/07: ‘It is not the responsibility of the Federal Reserve — nor would it be appropriate — to protect lenders and investors from the consequences of their financial decisions.’

1/10/08: ‘The Federal Reserve is not currently forecasting a recession.’

6/3/08: ‘The Federal Reserve will not monetize the debt.’ Fed buys U.S. gov debt and replaces it with credit to the banks holding the debt and holds the debt on the Fed balance sheet, creating dollars out of thin air.

7/20/08: ‘The GSEs are adequately capitalized. They are in no danger of failing.’

“I think,” our reader concludes, “the two tag lines I have on my business email signature are appropriate:

“‘We are spending more money than we have ever spent before and it does not work… After eight years… we have just as much unemployment as when we started… and an enormous debt, to boot.’ — U.S. Treasury Secretary Henry Morgenthau, May 9, 1939

“‘Those who cannot remember the past are condemned to repeat it.’ George Santayana (1863–1952)

“Love The 5…sometimes it takes more and sometimes less, but always worth the time… THANKS!”

The 5: You forgot Bernanke’s greatest hit of all, which we cited the day after Yellen’s speech last month: “We’ve never had a decline in housing prices on a nationwide basis,” he said in July 2005.

But what do we know? We’re just lowly newsletter writers and Bernanke in his post-Fed career collects minimum $200,000 for a single speech…

P.S. We never get tired of hearing from satisfied readers: “Bought 50 shares of ARNA for $920 and sold the same 50 shares today for a $400 profit, plus or minus. Standing by for further updates, as I still have well over 50% of my allotted stash for investing.”

That’s a reader of Penny Pot Profits, by the way. And another recent recommendation of Ray Blanco’s is also paying off big-time — 164% in only seven weeks.

It’s not too late to make your big move in the “budding” pot market. Here’s where to start.