So much for “Goldman’s kiss of death.”

That was the cheeky name we gave last month to a sudden sell-off in the five biggest stocks of the S&P 500 — Apple, Alphabet (Google), Microsoft, Amazon and Facebook. In recent years, those five stocks have accounted for the bulk of the gains in the S&P 500 — spanking the performance of the other 495 stocks in the index.

On Friday, June 9, Goldman Sachs issued a report declaring the “Big 5” to be overvalued. If traders needed an excuse to hit the “sell” button, that was it.

But the sell-off didn’t last. As of this morning, Facebook, Amazon and Microsoft are all above their lofty levels before Goldman’s kiss of death… while Alphabet and Apple are within easy reach: 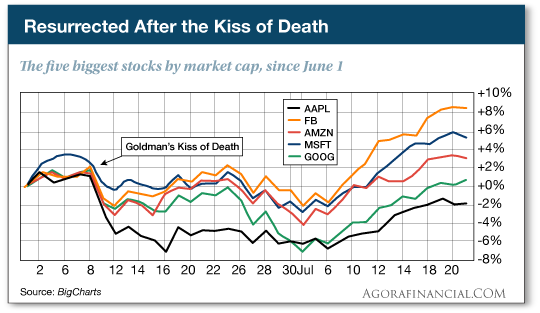 Even this morning, as the major U.S. stock indexes are all in the red, the Big 5 are holding their own. In fact, the Nasdaq Composite, laden with tech stocks, is down microscopically at 6,386 — only four points below its record close last Thursday.

“The Nasdaq is back,” says Alan Knuckman, 25-year trading veteran and the newest addition to the Agora Financial team.

Alan predicted as much last week to his readers of his new Weekly Wealth Alert trading service.

How did he know?

“The epic comeback in the tech industry follows a price pattern seen in every sell-off in the last seven years… And while past performance is no guarantee for future performance, this trend has been repeated over and over this past decade — always catapulting tech stocks to new all-time highs.”

But there’s one tech stock in particular that’s captured Alan’s eye this week. Out of respect to his paying readers, we’re compelled to withhold the name. But it’s a substantial industry player with a market cap north of $35 billion.

Alan is noticing unusual action in this company’s options — enough to trigger the patent-pending tool he’s using to identify insider activity that can touch off a huge leap in the next week or two.

We think of this tool as the “someone knows something” indicator… but Alan prefers to call it by the much more direct name “Weekly Paycheck Indicator.” He shows you how to put it to work and start collecting your weekly checks in this easy-to-follow introduction.

It’s a quiet day not only for stocks but for nearly every asset class. Gold is up a buck at $1,254.

Treasury yields are moving up, the 10-year at 2.25%. Oil is gyrating amid hourly rumors emerging from meeting of oil ministers from the OPEC nations and Russia; for the moment, a barrel of West Texas Intermediate fetches $46.24.

The big economic number of the day is existing home sales — down 1.8% in June, according to the National Association of Realtors, more than expected. Year-over-year sales are up a tepid 0.7%. That’s largely a reflection of tight supply; the median price of an existing home is $263,800 — up 6.5% from a year ago. (Little wonder our income specialist Zach Scheidt remains bullish on homebuilders.)

The Trump administration has a funny way of demonstrating its deregulation mindset — at least when it comes to Amazon.

Amazon’s proposed acquisition of Whole Foods is subject to approval by the Federal Trade Commission. And as part of that review process, the FTC “is looking into allegations that Amazon misleads customers about its pricing discounts,” according to the Reuters news wire.

Earlier this month, an outfit called Consumer Watchdog filed a complaint with the FTC. The group studied about 1,000 products on Amazon last month. It found “reference prices,” or list prices, on about 46% of them.

More from Reuters: “An analysis found that in 61% of products with reference prices, Amazon’s reference prices were higher than it had sold the same product in the previous 90 days.”

Amazon, for its part, says Consumer Watchdog’s research is “deeply flawed… We validate the reference prices provided by manufacturers, vendors and sellers against actual prices recently found across Amazon and other retailers.”

As we mentioned last week, there’s a growing anti-Amazon drumbeat in some corners of the media — and perhaps within the Trump Justice Department, too. This latest news is fuel on the fire. We’ll be watching…

“The global market for crude oil has been in an intense period of change over the last three years,” says our Zach Scheidt.

“Midway through 2014, the Organization of the Petroleum Exporting Countries (OPEC) made the fatal mistake of flooding the market with oil in an effort to push prices lower. Their goal was to put U.S. oil producers out of business.

“The plan worked against a few U.S. companies. But the end result was not what OPEC expected.”

Indeed. Three years ago, oil was still north of $100 a barrel. Now it’s below $50. “Instead of putting most of the competition out of business,” says Zach, “low prices just triggered more investment in technology. And today, U.S. companies are profitable even at current prices.

“Furthermore, with the U.S. now producing enough oil to meet most of its domestic needs, there is much less need to import from other countries. That means oil now trades in a free global market (as opposed to a market manipulated by OPEC).

“Sure, in a free market, prices move higher and lower based on a number of different factors. But the key benefit to a free market is that technology and competition usually drive prices lower — which is great for consumers like you and me.”

Zach’s favorite way to play the energy market is with his “perpetual income strategy” — which his premium subscribers used to pull in an instant $225 payout last week.

What would summer be if we didn’t take note of some lemonade stand law enforcement here in The 5? Only this time there’s both a happy ending — and a cruel twist.

One day this month, Jasmine LaRoche set up shop in Discovery Bay, California. Her parents said she had just one hour and that was it.

But one hour was more than enough time for events to turn sour. Not because the cops showed up… but rather a busybody bystander who proceeded to give her the business, or more to the point, threaten to take it away.

Jasmine’s dad Richard called the guy out on Facebook in no uncertain terms. “Sorry if her ambition threatened you… I understand that you are upholding the ‘law,’ but really dude? You’re the reason why kids lack ambitions nowadays, fear caused by schmucks like you. You are a sad individual. She said you picked up your phone and said you were calling the police. We all know you did that [to] intimidate her, just sad and pathetic.”

Jasmine LaRoche, getting the sort of civics lesson you don’t see in textbooks [Facebook photo]

So yes, there was a happy ending. An anchor for Oakland’s Fox station picked up Dad’s Facebook post and it quickly went viral. Jasmine set up another lemonade stand a couple of days later — for three hours. “Ran out of cookies and had just enough lemonade for the last two police officers,” says Dad. And the cops left her alone.

But you really have to wonder about the mindset of someone so obsessed with following rules that he’d do what he did. Maybe we need to start a “Stop Snitching” movement for lemonade stands…

“I wish I had the resources for Penny Pot Profits,” a reader laments. “I sure would have liked to give it a try.

The 5: The subscription fee for Penny Pot Profits is steep because it’s a short-term trading service, aiming for big gains in a small time frame.

But there’s a basket of pot stocks in Ray Blanco’s entry-level newsletter Technology Profits Confidential. It’s designed for someone with limited resources who wants to stick their toe in the market. These are buy-and-hold plays for the longer term.

Yes, they’re totally legal in every state, including Texas. Access to our beginner’s penny pot stock research is right here.

“I get that Congress wants to repeal the Affordable Care Act, which I agree with,” a reader writes. “What I don’t understand is why they want to replace it.

“Why not simply expand Medicare to cover everyone? The average employer-sponsored health care costs are as follows, according to the Kaiser Family Foundation (single, not family):

“You could actually raise Medicare taxes to 15% total or 7.5% split employer/employee, approximately a 5x increase, and then eliminate employer health coverage with no real cost difference.

“Self-employed individuals would have the choice to pay in the full 15% themselves or buy a private plan for its currently insane price. Being the largest combined insurance pool ever to exist in the U.S., the government should be able to (yeah, I know) negotiate better terms than any private employer or individual ever could. If not, then there are enough price data out there that insurance companies can be left out entirely. Government can set all care pricing and pay providers directly.”

The 5: “Medicare for All,” as its advocates call it, might be better than the current system, God help us. Or even the pre-Obamacare system. And there’s much to be said for divorcing health insurance from employment.

We’d still rather see a genuine free market with price transparency in which costs would collapse and care would be as affordable as it was for middle-class families 50 or 60 years ago.

True, it would also be the end of a lot of bogus administrative jobs in health care that have been created in the last 30 or 40 years… but we could get by.

P.S. Did you play it? On Friday, readers of David Stockman’s Bubble Finance Trader were urged to take profits from put options on Chipotle Mexican Grill — a onetime Wall Street darling where the bloom has definitely come off.

David says there’s another line of business that’s about to get slammed, and only days from now. Your profit potential could be even greater.