Talk about having a target on your back: Jeff Bezos became the world’s richest person this morning.

Amazon reports earnings after the close today. But traders already sense the numbers will be good; as we check our screens, AMZN stock is up 2.5% on the day. That puts Bezos’ net worth somewhere north of $91 billion — exceeding Bill Gates’ $90.7 billion on the Bloomberg Billionaires Index.

So Bezos’ personal wealth has reached a pinnacle at the very moment people in Washington are questioning whether Amazon is too big for the country’s own good.

Hmmm… Bill Gates knows a thing or two about interacting with the Justice Department’s antitrust division. Remember the brouhaha in the late ’90s about how Microsoft’s Internet Explorer web browser was taking over the world? Bezos might want to give Gates a call.

[Emendation: We put our foot in it on Tuesday when we described The Washington Post as an Amazon subsidiary. It is not; it is owned by a holding company Bezos created to buy the paper in 2013. No, you don’t have to write into us with any jokes about “Big Brother and the Holding Company,” thank you very much.]

Coincidentally or not, the new “world’s richest person” emerges on a day when there’s new talk about “taxing the rich” — from a Republican White House.

The Intercept reports that Trump aide Steve Bannon is pushing to jack up the top marginal income tax rate from the Clinton/Obama level of 39.6% to 44%. It would affect people earning more than $5 million a year.

The news comes on the heels of the president telling The Wall Street Journal, “I have wealthy friends that say to me, ‘I don’t mind paying more tax.’”

So a Republican president is retailing the same line of BS that Democrat donor Warren Buffett’s been peddling for years.

If you’re a longtime reader, you’ll have to suffer through us once again reciting a passage from the 2009 book Endless Money, by Baltimore-based wealth manager Bill Baker. If you’re a newer reader, you should know it’s become a touchstone for us over the years.

“Tycoons such as Soros and Buffett can call for higher taxation of income,” he wrote. “This is a very cynical and downright mendacious strategy, for they know full well this burden would fall primarily upon members of the upper middle class, who have not yet achieved the threshold that would permit them to shift income to tax-minimizing structures…

Thus, Google founders Larry Page and Sergey Brin “pay themselves just $1 in W-2 income,” Baker wrote, “but each year, they may accrue millions or even billions of dollars of unrealized capital gain.”

Buffett knows all about this ruse. Bannon, who for all his populist bluster once hung his hat at Goldman Sachs, surely knows about it too. And now you’re hip to it.

[Apropos of nothing: What’s up with this tweet from one of Hillary Clinton’s most vocal Hollywood supporters?] 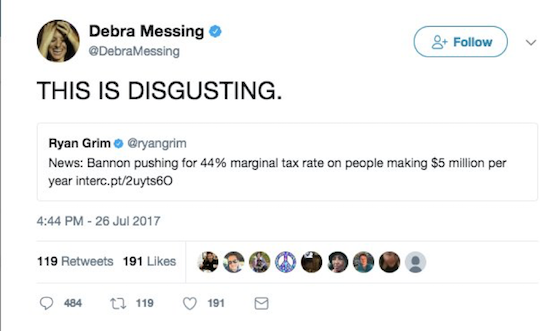 Meanwhile, great numbers from Facebook have pushed CEO Mark Zuckerberg to within spitting distance of Buffett on the world’s-richest list.

FB profit leaped 71% during the second quarter. FB shares are up nearly 3% on the day. That’s pulled Zuck’s net worth up to $74.3 billion — about $200 million shy of Buffett.

The company is running out of room to place ads on people’s “news” feeds. But that just means they can charge more for a limited amount of space. Proof once again that Facebook’s biggest asset is its user base — and the ginormous amount of personal data people willingly surrender to the company, which it then sells to advertisers.

Amazon has a huge database too, but Facebook’s puts it to shame. “It is quite possibly the most valuable asset in the world today,” says Agora Financial contributor James Altucher. “More valuable than Saudi Arabia’s oil reserves, Google’s algorithms or the recipe for classic Coke.”

At the time we cited James’ analogy here eight weeks ago, FB was bumping up against resistance between $150–155 a share. This month it went on a tear, and as we check our screens now it’s above $171.

Amid a blitz of earnings, the major U.S. stock indexes are “mixed” today. The Dow is up, less than a point away from 21,750. But the S&P 500 is down a bit, and the Nasdaq is down more than a half percent.

As for other asset classes, the big driver in the last 24 hours is the Federal Reserve. Yesterday, the Fed issued one of its every-six-weeks policy statements. We read the same statement traders did, but somehow traders read between the lines to conclude the Fed is subtly shifting to a more “dovish” stance.

According to his model, the Fed has given up not only in raising interest rates in September but also in December.

That said, the Fed is still full speed ahead with plans to reduce its bloated $4.5 trillion balance sheet. We won’t rehash the details here; if you like, you can revisit our write-up after the Fed’s June meeting. The point is that reducing the balance sheet has the same “tightening” effect as raising the fed funds rate. The Fed is pursuing this course at a time the economy is shaky and with no plans to hit the pause button if something goes wrong.

“This will have the predictable effect of slowing the U.S. economy even further,” Jim writes in a note from the Sprott Natural Resource Symposium in Vancouver. “This slowing will pull the rug out from under the ebullient stock market.

“It will also cause the Fed to flip suddenly to ‘easing’ by using forward guidance about no rate hikes in December or early 2018. That will be a catalyst for a stronger euro, stronger yen, weaker dollar and a higher dollar price for gold.”

Too much of a good thing: California is facing a massive marijuana surplus six months before recreational cannabis becomes legal there.

Depending on who you talk to, California’s pot production is five times consumption. Or maybe eight times. Or 12. State-licensed growers are on “a painful downsizing curve,” said Hezekiah Allen of the California Growers’ Association during a panel discussion yesterday in Sacramento.

Sure, it can be shipped to other states — but not legally.

We’re sure state officials were having discussions like this in the 1930s after Prohibition ended. And we’re equally sure there were smart people who knew how they could make a legal fortune.

“Dave, hats off to the reader who signed off, ‘Maybe I’m just getting grumpy in my old age,’” begins today’s mailbag. “I’m right there with him — because he is correct.

“Our Constitution does not grant rights. It prevents our government from infringing on them. When you step back and look at things in terms of natural laws, no one has a right to their next meal (let alone health care).

“Those who whine about their ‘entitlements’ don’t like to acknowledge the fact that these social services are paid for by others. Inflation and taxation are the government’s means of achieving this, as well as funding other profligate spending. This amounts to stealing from productive citizens while subsidizing unproductive ones. History has repeatedly shown that victims of such theft include future generations and that it’s a path to serfdom and collapse.

“I, too, never signed the social contract. If we have a shared obligation, it is simply to do something of value without taking others’ liberty or property from them! Each one of us needs to earn it every day.”

“Bitcoin sure looks like it is approaching mania status to me,” writes one of our longtimers.

“I mean, at least you got something with the whole tulip bulb thing.

“With Bitcoin, you can be a millionaire in the morning or have just enough to cover a latte by the time the afternoon rolls around. And back to a billionaire tomorrow.

“The dollar is only worth the cotton it is printed on, but Bitcoin? It is digits in the ethos backed by no one. Even the person who invented it won’t give their real name!

“Someday we are going to look back on this and say, ‘How did we do this bubble thing all over and not see it, again!?’

“Regardless, it is incredibly interesting to watch the attempt of a new currency type being birthed in real time. God knows we need better options than currently available.

“But only the distortions caused by massive debt and money printing could make cryptocurrencies look like a better alternative to worthless paper.

“Am I alone in feeling this way? Do any of your analysts see it this way?

“If not, I will admit I am wrong and immediately go buy some gold with my bitcoin.

The 5: If the lore is correct, it’s those very “distortions caused by massive debt and money printing” that inspired Bitcoin’s still-elusive creator “Satoshi Nakamoto” to develop a digital currency that couldn’t be replicated into infinity.

“In many ways,” says our cryptocurrency apostle Louis Basenese, “these are the modern equivalents of gold and silver, which were pure forms of money before governments and bankers got around to manipulating them for their own benefit.

“So in a sense, today’s cryptocurrencies are probably the last ‘pure’ currencies on earth.”

Of course that alone is not a reason to buy them. Too many people have lost their shirts because they were eager to engage in their own form of libertarian virtue signaling: “Look how edgy I am, defying the powers that be and their fiat currency by diving into Bitcoin.”

As the late newsletter guru Harry Browne was fond of saying, “The stock exchange isn’t a pulpit. If you want to promote a particular environmental policy, political philosophy or other personal enthusiasm, do it with the profits you make from hardheaded investing.”

What holds for the stock exchange holds equally for cryptocurrencies…

P.S. Besides, it’s not as if all cryptocurrencies are in a bubble. After all, there are 831 of them. They don’t all rise and fall in tandem. It’s just a matter of picking the right ones at the right time.

(As a reminder, Louis Basenese has five top candidates. And he says for maximum gains, you’ll want to act before this week is over.)