The Biggest Pile of Cash

Leave it to the establishment media and Wall Street analysts to keep their eye on the wrong thing.

The biggest publicly traded company in the world, Apple, reports earnings after the closing bell tomorrow afternoon. All eyes are on the iPhone: Sales are likely slumping as people await the new 10th-anniversary edition… but the new edition is running behind schedule.

Here’s MarketWatch: “Financial analysts believe, based on media reports and their own sourcing, that the more expensive model could take longer to make it to consumers in mass quantities due to production challenges with the OLED screen and fingerprint reader.”

The tunnel vision is understandable. During the first quarter of this year, the iPhone accounted for 69.4% of AAPL’s revenue. Many analysts fret that Apple is a one-trick pony.

To which our Louis Basenese said in these pages last May, “So what?!

“So are Alphabet (internet search), Amazon (e-commerce) and Facebook (mobile advertising). By the way, these firms are also among the 10 most valuable companies in the world.”

Meanwhile, Apple might well be set to make an announcement tomorrow that would make everyone forget about the iPhone, at least for a few hours.

Recall that Apple is not only the biggest public company in the world based on market cap… it’s also sitting on the corporate world’s biggest pile of cash — $256.8 billion.

That’s what Louis expects. If not tomorrow, then very soon. After all, Apple shareholders don’t have infinite patience with the company sitting on all that cash. They want to see a deal that’s going to “move the needle.”

After 12,480 hours of research… Louis is convinced Apple has identified its target. He says you want to have a position in this “marked” stock. Ideally, you’re holding this position before Apple’s quarterly conference call tomorrow afternoon. Just in case.

Which means there’s still time to act. But not much. Here’s Louis with the rest of the story.

From the Financial Times this morning: “Republican failures to win legislative victories — embodied by the collapse of health care reforms — last week injected an early bout of nerves into financial markets as investors confronted the possibility of a disorderly stand-off over the U.S.’ public debt limit. In a worse-case scenario, this could lead to a government shutdown as well as market turmoil.

“There are also fears the debt ceiling discussions could get intermingled with other issues in Congress, in particular discussions over the 2018 budget and the potential for a government shutdown after the expiry of the fiscal year on Sept. 30.”

Gee, what was it we were saying here eight months ago?

“The debt ceiling expiration is the skunk currently slinking around in the woodpile,” said David Stockman in this space on Dec. 1, 2016.

“Washington will be paralyzed for months — even years — after the inauguration. There will be no massive tax cut, no huge infrastructure initiative or any other variation of the ‘fiscal stimulus’ will-o’-the-wisp that seems to have sent the bond markets reeling and the stock averages to giddy flights of fantasy.”

The House has already headed home for its summer recess, although the Senate is sticking around for a couple more weeks. So the whole thing’s in suspended animation till after Labor Day now.

And in the meantime, the Dow industrials are now less than 100 points away from the 22,000 mark.

But it’s only the Dow that’s in the green on this final day of July. As we write the S&P 500 and the Nasdaq are down a touch.

Elsewhere, dollar weakness is once again the story today. The dollar index rests at 93 on the nose. Which is to say it’s on the verge of breaking below “support” that’s held for 2½ years… 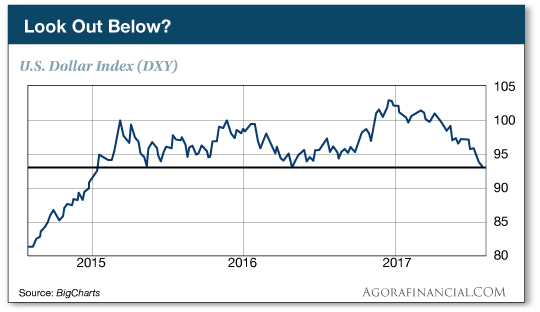 That would no doubt be bullish for gold. For the moment, the Midas metal is treading water at $1,268.

More than ever, it looks as if we can chalk up the “retail apocalypse” in no small measure to the Federal Reserve.

This morning’s Wall Street Journal tells us that four retail-roadkill companies — Payless ShoeSource, Gymboree, rue21 and True Religion Apparel — were all bought out by private equity firms over the last 10 years. “Now lawyers for creditors have questioned whether private-equity firms share blame for the retailers’ financial collapse, in some cases by loading debt on the companies.”

Payless was the target of a leveraged buyout in 2012. The investors larded down the firm with $700 million in debt, even as they paid themselves $350 million in dividends. “The depletion of their coffers put the company on a dangerous path that ultimately led to this instant bankruptcy filing,” say some of Payless’ unsecured creditors in court papers.

But hey, why not load up a company with debt when you can borrow cheaply, right? Wall Street merely acted on the perverse incentives made possible by the Federal Reserve and almost a decade of near-zero interest rates.

And as we pointed out earlier this month, the Fed also enabled Amazon to bigfoot its way through whatever retail niche it wanted to. All that easy money sloshing around Wall Street found its way into Amazon shares, which Jeff Bezos kept plowing into new lines of business.

It’s the Fed that did so much to make Amazon the behemoth it is today.

Well, at least until the Justice Department cuts it down to size, as Jim Rickards is forecasting.

But it’s a more chilling Jim Rickards forecast that comes to mind as we read the news from Europe this morning.

“European Union states are considering measures that would allow them to temporarily stop people withdrawing money from their accounts to prevent bank runs,” says the Reuters newswire.

The eurocrats have been working on a proposal all year, but the plans began to pick up speed after the failure of Banco Popular in Spain last month. “Under the plan discussed by EU states, payouts could be suspended for five working days and the block could be extended to a maximum of 20 days in exceptional circumstances.”

Wow… Shades of the “ice-nine” scenario Jim Rickards paints in the first chapter of his most recent book, The Road to Ruin. You do have your copy by now, don’t you?

So long, myRA — it was nice knowing you.

The Trump Treasury Department has announced plans to wind down the “myRA” program announced with much fanfare by President Obama during his 2014 State of the Union Address: “It’s a new savings bond that encourages folks to build a nest egg,” Obama said. “MyRA guarantees a decent return with no risk of losing what you put in.”

Basically, it was a Roth IRA-type vehicle investing in government paper, targeted toward people whose employers don’t offer a retirement plan.

In our very stream-of-consciousness musings the day after Obama’s speech in 2014 — we invoked the raunchy Raquel Welch movie Myra Breckinridge (ehh, you had to be there) — we suggested myRA was a foot in the door for some sort of mandatory retirement savings program, not unlike they have in Australia.

Even though Team Trump is chucking myRA, we wouldn’t put it past them to come up with their own similar scheme. We’ll be watching…

From the London Telegraph comes a story datelined Berlin — where a passerby in the city’s Neukölln district found a briefcase containing the bars and the cash and turned it into police.

“Amazing what you can find under a tree in Neukölln,” police tweeted. 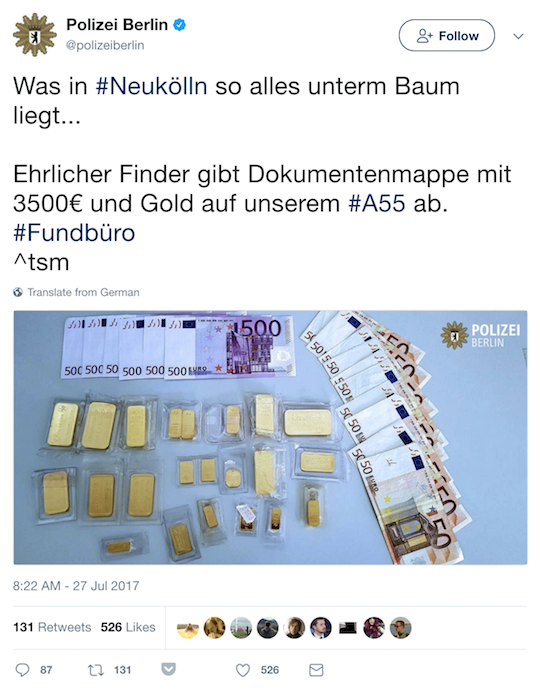 There were personal items in the briefcase, so it wasn’t hard to track down the owner. According to a police statement, “He said he put his things down while locking up his bicycle and then simply forgot about them.”

People who find lost items are eligible under German law to collect up to 5% of the value. And those gold bars are worth more than $35,000. So the finder might be due nearly 2,400. Oh, and police say they’ll collect a 10% “storage fee.”

[In case you’re wondering: As of early 2016, 79% of transactions in Germany were still conducted in cash. At that time the government proposed a ban on cash transactions over 5,000 euros, or roughly $5,900. The backlash was furious and it appears nothing has come of the idea.]

“I do understand some of your readers’ skepticism of cryptocurrencies,” begins today’s mailbag, “but they do so at their own peril.

“This is an all-new asset class and folks don’t understand the technology therein… Seems to me, after thoroughly researching this new species, a person cannot walk away without seeing the possibilities here.

“The volatility is just part of this game, but this ‘fad’ is going to soon be the ‘norm.’

“Thank you for the work you do here in The 5, much appreciated.”

The 5: And thank you. Our cryptocurrency project is still in its early stages, but it’s about to accelerate later this month. Watch this space…

“What is new or shocking about Wisconsin’s subsidies for Foxconn?” a reader writes. “Happens all the time.

“New York state has been running ads nationwide to lure businesses to 10-year tax-free status to locate in their state. If the $2 billion is spread over such a 10-year period or even longer it is a good investment!”

Says another: “Sounds like a pretty good deal for Wisconsin taxpayers if you can recover your investment in less than four years!”

And in a fundamental sense, the only thing “new” is a president glomming on to these deals to grab some of the credit.

Three years ago, we took note of a study by the National Employment Law Project that found inflation-adjusted wages for factory workers have been slipping since the turn of the century. So much for “well-paying manufacturing jobs.”

Meanwhile, too many of these tax breaks and other “incentives” are skewed toward large businesses. Two years ago we spotted a study by an outfit called Good Jobs First examining “economic development incentives” in 14 states totaling $3.2 billion. These are subsidies that were made available to businesses of all sizes; the researchers threw out 500 other incentive programs that had barriers to entry all but ruling out small business.

The key finding: Big business lands 70% of the deals and 90% of the dollars.

In the meantime, be very wary of claims that one tax break or another will somehow “pay for itself” down the road…

P.S. As we go to virtual press, the media are beside themselves with allegedly leaked images of what the next iPhone looks like… 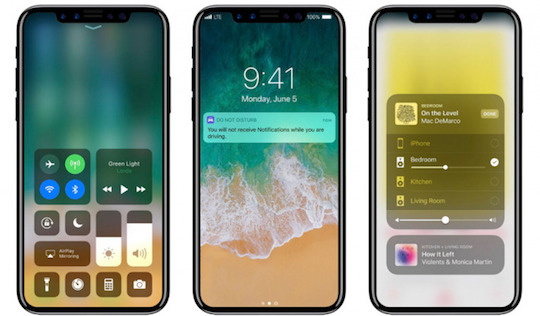 Whatever. Let them speculate. The real Apple story might well break barely 24 hours from now — and it will catch the mainstream completely off-guard. You’ll find the time-sensitive details at this link.