This is crazy: The legacy financial media appear to believe that cryptocurrencies are a zero-sum game — that for one type to “win,” another must “lose.” 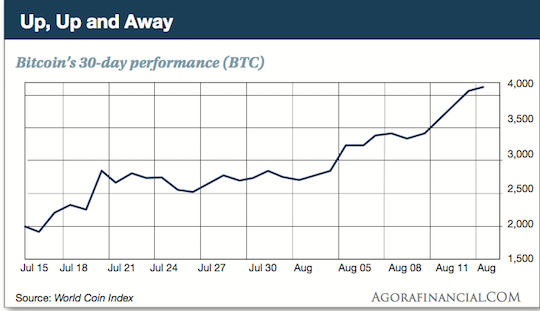 “The gains Saturday and Sunday seemed to be coming at the expense of other digital currencies,” says this morning’s Wall Street Journal, “many of which have been issued just this year in a developing trend called ‘initial coin offerings’…

“Saturday, coin-offering tokens and digital currencies across the board started falling, and it appeared that the liquidated capital was flowing directly into bitcoin. Of the top 20 tokens listed on the site CoinMarketCap, 18 were negative.”

As you might know, these ICOs are of intense interest to our crypto evangelist, Louis Basenese. Perhaps you’ve even acted on his recommendations.

So the question today: Should you really worry that bitcoin’s gains are the ICOs’ loss?

The answer is no, and the reason is this: Rightly or wrongly, crypto is taking its place alongside gold, foreign real estate and other asset classes as a “safe haven” or “crisis hedge.”

“Bitcoin’s recent move confirms a massive paradigm shift,” Lou tells us via email this morning. “As angst over North Korea soared last week, the traditional safe haven of gold barely budged, rising about 3%. Meanwhile, bitcoin rallied 26%. And it’s up over 40% so far in August. Clearly, investors are voting with their capital that they view cryptocurrencies as a new hedge against uncertainty.

“It makes sense that bitcoin is attracting the most of the money flows, since it’s been around the longest. However, it’s only a matter of time before the same investors start pouring money into lesser-known, superior but undervalued cryptocurrencies.”

In other words, a rising tide will lift all boats. Indeed, it’s already happening: “One of our three favorites,” says Lou, “is up 33% in the last week, outpacing bitcoin and gold. I expect other lesser-known cryptos to start outperforming imminently, too.”

So don’t let mainstream scaremongering keep you from taking a decisive step to secure your financial future — maybe the most decisive step you can take this year, or even this decade. The next big ICO, with $241 trillion up for grabs, is just two weeks away. If you want to be properly positioned to claim your share, follow this link to get started.

Well, Jim Rickards has been doubtful all along that a war with North Korea is a this-year thing. It’s a next-year thing. And it’s the topic of his next live briefing for Strategic Intelligence subscribers this Wednesday morning at 10:00 a.m. EDT.

“Apple’s performance has been very strong, but the best is yet to come!” says our income specialist Zach Scheidt.

Apple was one of three free stock picks we gave you one day as the year 2015 wound down. In the nearly 20 months since, it’s up more than 45% — compared with a gain of less than 20% for the S&P 500. We mentioned AAPL’s most recent quarterly numbers when they came out earlier this month, but Zach wants to say a thing or two about them.

The latest strong numbers “came largely from sales of iPads and Mac computers,” says Zach — “not from the company’s flagship iPhone products.”

That’s a big deal, because at times, the iPhone has accounted for up to 70% of Apple’s revenue. Diversification is a good thing — especially during the second quarter, when consumers usually sit on their hands waiting for the next-generation iPhone to come out in the fall.

About that next-gen iPhone: “Some analysts were worried that Apple would run into a shortage and have to delay the release of the anniversary model,” Zach says. “But Apple’s third-quarter guidance suggests that the company will deliver these models on time in order to hit its $49–52 billion revenue target.

“But even if the new model is only available in limited quantities, Apple still wins,” Zach continues.

“That’s because scarcity simply makes global consumers want the new iPhone even more. In fact, some have speculated that Apple makes limited numbers of phones on purpose to get buyers to worry about whether they can get one or not. That way, when more inventory hits the shelves, it’s immediately bought.

“So looking toward the end of the year, I expect more great things out of Apple. Which means the stock will continue to trade higher.”

And that’s even if there’s no progress in Washington on corporate income tax reform. If there is progress, Apple will have ample incentive to return some of its $261.5 billion cash hoard to shareholders in the form of dividends and buybacks.

Apple is one of Zach’s favorite names under this scenario — something he calls “cash for patriots.” (You can learn about some of the others when you click here.)

The Nasdaq Biotechnology Index is up 15% so far this year, compared with 10% for the S&P 500. And Ray says policy changes are driving many of those gains: “Trump favors streamlining the FDA’s process to make it easier and cheaper for new drugs to commercialize.”

Trump’s FDA chief Scott Gottlieb is moving quickly. “He, too, wants to make it easier to bring new therapies to market. He’s working on reducing the backlog of new drugs awaiting approval and is hiring new staff to help speed things along. He’s also shown that the regulator will now be more flexible in approving new drugs.

Ray will follow the fortunes of his favorite biotech names in Technology Profits Confidential, Breakthrough Technology Alert and FDA Trader.

Stupid lawsuit tricks: Porsche is settling a class action lawsuit by… buying a pair of sunglasses for many Porsche owners.

The suit alleged that the dashboard trim in several models was blinding in sunlight.

The plaintiffs claimed it was a safety issue. For its part, Porsche said it had no reports of crashes resulting from the glaring trim.

The settlement “applies to owners or lessees who have or had any 2007–2016 Porsche with a Cognac, Luxor Beige, Natural Brown, Platinum Grey or Sand Beige dashboard,” according to Motor Trend. “If you bought sunglasses or made other modifications to your car to reduce the glare, you can get between $50 and $175 in compensation from the German automaker.” (Applications for sunglasses compensation must be in by Sept. 21, if you must know. For other claims, the deadline is June 25, 2018.)

No telling how much Porsche will end up paying out in total. But the company must have calculated that whatever it is will be cheaper than litigating a patently ridiculous case filed on behalf of folks who can well afford a pair of polarized sunglasses without a subsidy from Porsche.

“Can you get more specific information from the reader who combined Alan Knuckman’s techniques with Ray Blanco’s recommendations?” begins a new week of the mailbag. “I would like to know which recommendations he used and long he held the options.”

The 5: We didn’t realize at the time, but Ray Blanco recommended selling the position last Wednesday. So we won’t give paying subscribers short shrift by identifying the biotech stock as Dynavax Technologies.

“I am a fairly new subscriber and investor in the stock market and the crypto market,” a reader writes.

“My recent subscriptions with your firm and others have led me down a path of hype to buy another tool or another subscription or to become one of 200 special someones a day to the next best thing that may give you a possible chance to make money.

“This has made me quite anxious about taking another step in the realm of investing into the opportunity you are offering. Every time I open up a link I am completely amazed that yet again I went down the rabbit hole to spend $1,795 or $3,000 or $895.

“When is someone going to come up with the idea that there is so much more to gain by helping small investors like me with a way to get started without such a huge chunk of change with absolutely no guarantee.

“Why not give the little guy a break with a successful ICO or stock idea with a monthly membership or let us make money and pay you back like a dividend for your advice.

“Thanks for letting me vent!”

The 5: Since your inquiry seems focused on crypto, let’s address that.

The crypto recommendations that accompany Louis Basenese’s entry-level newsletter True Alpha are accessible to nearly anyone.

ICOs — the focus of our new Crypto Alert trading service — are another matter. The potential reward is much greater (and the time frame for that big payoff much shorter), but the risk is also greater.

The same logic applies outside the crypto realm — larger-market-cap stocks in our most affordable newsletters, more risky microcaps and option plays in the more costly services. Ideally, the money you make following the recommendations in the inexpensive newsletters will allow you to step up to the premium services. That’s how we get happy long-term customers!

“Once again I am sitting on the dock and watching my ship sail away,” writes one of our regulars. “I am beginning to believe that cryptocurrencies may be valid.

“I tried to buy some bitcoins a number of years ago but the process was so convoluted that I screwed up. I tried to buy two coins at $45, but my wire transfer got screwed up and I lost my little bit of cash and never got my coins. That $90 investment that would now be $6,000. I never got back in, as the price just ran away from me.

“Things like that have happened many times in my life. I missed the computer boom in the late ’90s, even though my first business venture was to set up and sell farm and ranch record-keeping in the early ’80s via an Apple II.

“My point being that if your subscribers have the financial ability to subscribe to the new Louis Basenese service, I think it will be worth their time. I think we are looking at the possibility of returns like Apple’s and Microsoft’s, and possibly in a much shorter time frame. I personally will likely miss the boat again. I do not have the time and ability to search out the potential big-time winners, and the subscription is a bit more than my means (and that is not a complaint).

“Here is the BUT…

“But if you are sitting on the fence and you have the means, I think you possibly may be well rewarded to jump on the boat and take the ride.

“Don’t miss the boat. Cryptocurrencies are a disruptive technology, I don’t know where it all goes, but the one thing we do know is big changes are coming down the pike in the next generation — ya might want to get on the bandwagon.”

P.S. As we go to virtual press, bitcoin has just crossed the $4,300 mark. Lou Basenese wasn’t kidding when he said $10,000 is a realistic possibility.

And if you want to play it safe in cryptocurrencies, that’s one way to go.

But Lou says really the big money can be made in a tiny pocket of the crypto market that few people know about — and the window of opportunity opens in only two more weeks. Check it out for yourself.