The Goldbugs Keen on Bitcoin

We realize a lot of gold bugs are coming around to cryptocurrencies. But in only 24 hours?

The gold bugs in question are VanEck, the $38 billion strong investment management firm that’s carved out a niche in “hard” assets — that is to say, natural resources in general and gold in particular. It’s VanEck that developed GDX, the big gold-stock ETF.

Last Thursday, Joe Foster — one of VanEck’s top fund managers and strategists — posted a blog entry trashing bitcoin and other cryptocurrencies. He called them “a fad that has attracted the attention of programmers, speculators and early adopters… At best, digital currencies may eventually occupy some middle ground as a niche product. At worst, they become a failed experiment that ends in tea

Foster speaks with considerable authority. For the last 18 years he’s run the company’s flagship VanEck International Investors Gold Fund (INIVX). Formed in 1968, it was the first mutual fund focused on gold mining stocks. At a time in the early ’70s, when it was still illegal for Americans to own gold bullion, people who mistrusted the monetary authorities bought shares of INIVX to help preserve their purchasing power.

The day after Foster’s blogpost, Friday, VanEck filed an application with the Securities and Exchange Commission to create a bitcoin ETF. Heh.

The VanEck Vectors Bitcoin Strategy ETF would invest in bitcoin futures contracts. “Performance of the fund is determined by the price‎ movement of the underlying digital asset (i.e., bitcoin), the rate of change and the change in volatility,” says the filing.

In fairness, it’s not as if VanEck suddenly changed its mind. Surely, the move’s been in the works for months. Foster, who does his job and does it well by visiting mines and burying his head in balance sheets, wasn’t privy to the decision-making process in the C-suite.

Asked for comment by CNBC, VanEck issued this statement: “Joe Foster makes a great case for gold relative to bitcoin as a currency and store of value. VanEck believes that the technology underlying digital assets, known as distributed ledger technology, has tremendous potential to revolutionize finance and trade. Digital assets are an investable asset class in their own right and continue to be integrated into the broader economy.”

The managers at VanEck aren’t the only gold bugs thinking like this. If anything, they’re late to the party.

Four years ago, when bitcoin was trading between $110-150 — it’s $4,119 this morning — Forbes interviewed gold-mining legend Rob McEwen. McEwen founded Goldcorp in the mid-1980s and grew it from nothing into a $30 billion company by 2006. Nowadays he runs a mining firm with his own name on it.

“Any currency exists only because at least two parties (a buyer and a seller) agree that it represents value,” he said. “So what constitutes money? On a South Pacific island, we might agree that chicken bones are a currency. In prison, we might agree that cigarettes are a currency. Today, while we all use fiat or paper currencies as money, a medium of exchange, there is a growing concern about the value of these pieces of paper.

“I don’t see why bitcoin can’t also grow and become another viable currency, an internet-based currency. If enough people accept it, it will be used. It seems to have momentum behind it and it’s intriguing how it’s truly separate from any country or central banks’ manipulation and control…

“I think it’s a mistake to write off this currency as a bubble or fad. Will it threaten gold? I don’t think so. I think the two will grow in tandem as alternative currencies to fiat currencies.”

Which brings us back to a point our own Lou Basenese made here last month: “These currencies cannot be manipulated by central banks like our own Federal Reserve or other central banks around the world.”

That fact has an immense amount of appeal to everyday people around the world. As we suggested yesterday, cryptocurrencies look attractive to China’s nouveau riche who know their country’s massive credit bubble is bound to burst sooner or later. Bitcoin is far preferable to a “wealth management product” that’s little more than a Ponzi scheme.

Westerners, meanwhile, look to crypto as an alternative to their own shaky currencies and ultralow interest rates, even if they have a poor grasp of economics. Thus the millennial from Brooklyn we quoted last week: “I don’t like the idea of money just sitting in a savings account — with the way inflation works and how low interest rates are, you’re losing money… It’s weird to say that owning cryptocurrency soothes that anxiety, because it’s counterintuitive, but it does.”

Is it any wonder there’s growing demand for new kinds of cryptocurrency? That’s what makes “initial coin offerings” so lucrative. And Lou says the most lucrative one of all is coming up in only a few more days, never to be repeated. There’s $2.41 trillion at stake. Don’t miss out on the chance to collect your share.

After a few days of North Korea excitement, the market action has settled back into its summer slumber.

Hmmm… We think traders are shrugging off this kind of talk at their own peril. And if the president does what we think he’s going to do, it could send shock waves throughout the entire stock market.

Meanwhile, the big economic number of the day is July housing starts, which clocked in weaker than expected. But permits, a better indicator of future activity, are holding up OK.

As long as we have gold stocks on the brain, Byron King — our resident geologist for Rickards’ Gold Speculator — sends along this intriguing chart… 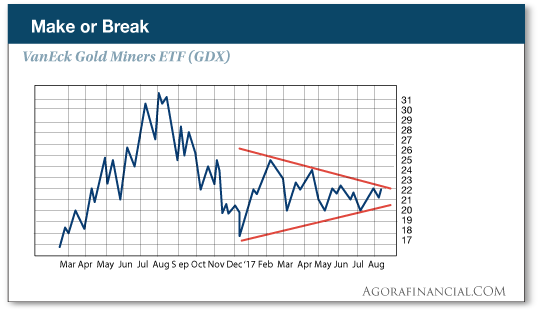 That’s GDX, the aforementioned gold-stock ETF run by VanEck. “Since the beginning of 2017, as gold prices have slowly found traction to the upside, mining shares have traded in a converging zone,” says Byron.

If the chart looks familiar, it’s because Jim Rickards shared a similar-looking one of gold bullion earlier this month. Only in this case, the convergence has been building for close to a decade… 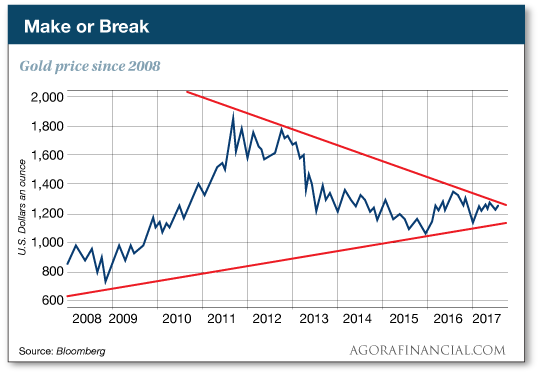 Jim and Byron say there’s every reason to expect a break to the upside. “Gold discoveries in the past 20 years are fewer and fewer,” says Byron. “Nobody can mine what has not been discovered. Hence, supply is tightening.”

In addition, “Gold demand is growing, from China, Russia, India, individual investors and more,” Byron points out. “Several key global players — China and Russia leading the pack — seek an alternative to the dollar and/or petrodollar; gold is clearly part of that scenario.”

Readers of Rickards’ Gold Speculator are well positioned to take advantage. And have an extra edge over other gold-stock investors for reasons you’ll understand if you follow this link.

Oh, Byron also reminds us “geopolitics are flaring up, from North Korea to the China-India border, to the Middle East, Ukraine and more. This kind of risk favors gold.”

Which brings us to the following…

A new front just opened up in the world’s most obscure — and potentially explosive — war zone.

Three times in the last month we’ve taken note of a tense border standoff in the Himalayas between nuclear-armed China and nuclear-armed India. Now there’s word of a new border eruption 1,000 miles west in Kashmir. Supposedly, Chinese soldiers crossed the border twice near Pangong Lake. Indian media reports there was an actual skirmish before the two sides retreated, although the weapons were limited to rocks and iron pipes. (Seriously?)

We’re hearing rumblings from Washington that some of this border business is Donald Trump egging on Indian Prime Minister Narendra Modi — delivering China a punch in the nose amid trade disputes and disagreements over how to handle North Korea.

If true, the Chinese won’t be caught by surprise. China and India fought a border war in 1962, before they became nuclear powers, and China delivered a whupping India hasn’t forgotten.

What’s more, China is prepared for a rematch, as journalist Eric Margolis explained in his 2000 book War at the Top of the World. He wrote of a 1983 meeting with Chinese military brass in Beijing: “The Chinese security officials told me that they anticipated a military clash with India in the Himalayas or Karakorams early in the 21st century.”

“Yesterday’s 5 reports retail surprises and other index optimism,” a reader writes by way of teeing up this question…

“Is it possible that Trump cutting regulations is having a stimulus effect on the Main Street economy?”

The 5: Entirely possible. As we pointed out last week, the folks at the National Federation of Independent Business have noticed “few if any new rules showing up in the Congressional Register.” (We think they mean the Federal Register, but we won’t nitpick.)

That might well explain why small-business optimism remains buoyant despite zilch for progress on Obamacare repeal, tax cuts, infrastructure and so on.

“My problem with bitcoin and the cryptos,” a reader writes, “is that it seems the best parallel I can conjure up is that they are like the old chain letters.

“As long as new people keep on putting money in, the price goes up. Maybe you’ll be lucky enough to have enough people buy in after you to push your purchase price up so that you’ll get to cash out.

“And I also understand the argument that newly minted middle class/bourgeoisie of China may want to have a tool to move money to a safer political jurisdiction — BUT there’s still no value unless new investors keep piling in.

“Always enjoy the info and banter in The 5.”

The 5: It’s all a matter of perception. If everyone collectively decides tomorrow that cryptocurrencies have no worth, they’ll have no worth. But as Rob McEwen said in the Forbes interview cited above, “if enough people accept it, it will be used.”

You might not think the pieces of paper in your wallet are particularly valuable, but for the moment you still use them because large numbers of people you transact with think they’re valuable — or they don’t want to go to the trouble of transacting in some other medium of exchange.

If there’s a perception of value, and that perceived value is growing, there’s no need for new people to come in and keep bidding the price up. That’ll happen on its own just fine.

Thanks for another thoughtful note. We’re getting a bunch of ’em on the topic of cryptocurrency. It keeps us on our toes…

P.S. Here’s a new boost to the cryptocurrency market that crossed the newswires only this morning: AMD, the big manufacturer of graphics cards for computers, is coming out with a new software driver geared toward crypto mining.

You don’t have to remember that. You just have to know it’s one more catalyst to propel new cryptocurrencies coming online — the “initial coin offerings” Lou Basenese is so enthusiastic about.

“We believe you’ll see your last — and best — chance to profit from it just a few short days from now,” says Lou. Click here to get started.