“A Threatening Enemy To Be Vanquished”

Yes, there’s a nervous edge to the market action as the week winds down — and we’ll get to it in short order — but we can’t resist easing into a summer weekend with a chuckle first.

It appears the stock-photo website Shutterstock is engaged in blatant stereotyping. About a month ago, users noticed the site was offering a large selection of video clips depicting a “cryptocurrency trader” sitting on the couch in his boxer shorts… 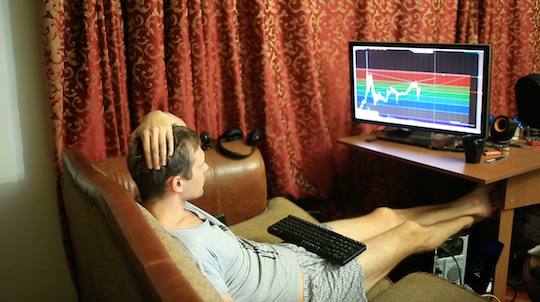 Because of course everyone engaged in bitcoin and other cryptocurrencies is both a nerd and a bro, right?

C’mon, Shutterstock, get with it. Crypto’s quickly going mainstream — as demonstrated by the huge interest among The 5’s decidedly older-skewing readership.

Little wonder, when everyday Americans are becoming multimillionaires off of crypto. And we assure you most of them don’t live in mom’s basement. Play it right and you stand an excellent chance to join their ranks in the space of only 35 days — as demonstrated at this link.

Now to the markets today… where the “safety trade” is once again in play. And no one has a clue why.

After we went to virtual press yesterday, the stock market fell out of bed. The Dow ended the day down 274 points, the worst day in three months. As we check our screens the Dow has shed 100 more points today, to 21,650.

But CNBC’s narrative was, “Concerns over Trump agenda grow.” For much of the afternoon the network breathlessly reported rumors that “Goldman” Gary Cohn, chairman of the White House National Economic Council, was about to resign as an act of protest.

Heh. We knew early Wednesday morning Cohn wouldn’t do any such thing… because of this tweet from The New York Times’ White House correspondent…

Yeah, that’s the way to convey your “disgust.” Don’t resign, just spout off to three people who can then be cited anonymously in the NYT, so you’ll have “plausible deniability” when your boss calls you on the carpet. There’s a real profile in courage. (Wouldn’t want to jeopardize that shot at being the next Federal Reserve chairman, huh?)

Whelp, as long as we brought up the subject, we might as well go there…

“The Charlottesville incident,” the author James Howard Kunstler ventured this week, “has the flavor of a ‘first shot’ in a new civil war.”

Hmmm… Here at The 5 we wouldn’t go so far as to say Charlottesville is our era’s Fort Sumter. Maybe Harpers Ferry. Or an even earlier incident in “Bleeding Kansas.”

But it’s been something we’ve been thinking about much of this year, even if we haven’t written about it till now.

In April, Georgia State professor Jennifer McCoy described the political state of play in anno Domini 2017 like so: “When voters divide into opposing camps,” she told NPR, “they come to view the other side not any longer as a political adversary… but instead as a threatening enemy to be vanquished.”

Where does that end? The prepper writer John Mosby painted this vivid word-picture in February: “This is about people burning down their neighbors’ houses and businesses, to run them out of town, over ideological differences. Look at the Balkans in the early 1990s. This is about a group from one side, murdering the entire family — Dad, Mom, brother and baby Sister — of their neighbors, over political differences.”

Mosby’s description seemed far-fetched when he wrote it six months ago. But now?

Even a scenario somewhat short of that dire outcome would be a very bad thing for asset classes other than precious metals, ammo and No. 10 Mountain House cans.

Speaking of precious metals, gold soared at the same time stocks stumbled yesterday… and now it’s knocking on the door of $1,300 for the fourth time in six months.

And it’s not exclusively a case of gold strength equaling dollar weakness; the dollar index is holding its own at 93.5.

That other safe haven, U.S. Treasuries, has also been rallying hard these last 24 hours. As prices rise, yields fall… and the yield on a 10-year note is now 2.18%, the lowest since late June.

Back to the stock market scare: The explanation might be far simpler than the ones the mainstream is reaching for.

We’ve gone throughout 2017 without a single 5% pullback in the market. We’re due. A tumble yesterday might have happened even in the absence of lousy earnings, a terrorist attack and West Wing melodrama. The mainstream would have simply found something else to pin it on.

Even with the market action the last 24 hours, the S&P 500 is down only 56 points from its record high notched a week ago Monday — a not-so-whopping 2.3%. It’s statistical noise in the context of a rally that began 18 months ago. 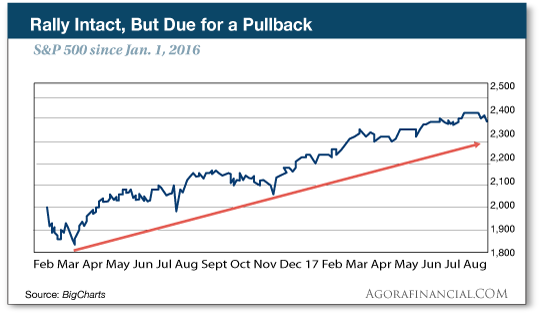 The rally would still be intact even if the S&P crashed 100 more points from the present level of [checking our screens] 2,425.

That said, we won’t dismiss the dangers of “growing concerns” about the Trump economic agenda.

Weeks before the inauguration, when Corporate America was breaking out the Champagne in anticipation of tax cuts, Obamacare repeal and a big public-works program… David Stockman was warning in these virtual pages that none of it stood a prayer of passage.

Indeed, he said Washington would descend into paralysis — complete with a debt-ceiling donnybrook and at least at least one “partial government shutdown” like the one in 2013. Which is exactly how matters are shaping up once Congress returns to work after Labor Day.

Hard times are back in Rural America. Or so we conclude from the latest Rural Mainstreet Index, a figure compiled by Creighton University econ professor Ernie Goss.

Each month Goss surveys bank CEOs in rural areas of 10 states stretching from Illinois west to Wyoming. Figures above 50 indicate a growing rural economy; below 50, a shrinking one.

A month ago, the number collapsed from above 50 to 40.7. And the new number is little better at 42.2. That compares with 41.1 at this time in 2016. “We continue to record economic weakness stemming from low agriculture commodity prices and fallout from the drought in parts of the region,” Goss says.

Whoa… Here’s an all-too-rare positive development in the War on Cash, courtesy of the Trump administration.

Late last night, Politico reported that the Trump administration is shutting it down. “A misguided initiative,” is how it was characterized in a letter from Assistant Attorney General Stephen Boyd to House Judiciary Committee Chairman Bob Goodlatte. “We share your view that law-abiding businesses should not be targeted simply for operating in an industry that a particular administration might disfavor.”

It’s a small victory for small business and the rule of law… but we’ll take them where we can find them.

Seriously? As we continued to write, the Dow suddenly erased the day’s losses — supposedly because of new resignation rumors. Now it’s White House chief strategist Steve Bannon who’s on his way out.

If true, it sorta makes sense in light of a Financial Times story this morning that described a power struggle between Bannon and the aforementioned Gary Cohn. Funny how at the start of the year, the widespread impression was that Bannon was “Trump’s brain,” ala Dick Cheney.

“I read Louis Basenese’s crypto recommendations in True Alpha, a reader writes, “and figured that if $20 would make me some money, then $500 would make me 25 times as much.

“So I bought seven recommendations and picked one on my own. Initial investment includes all exchange transfer fees…

“The only catch is I can’t sell it, or I’ll screw up the geometric rate of increase!”

The 5: Good on you. That’s heartening to hear — and positive reinforcement as we move into the next phase of our ambitious crypto project.

“Money is something that you believe can be exchanged within your community for something of value to you. There are other characteristics that are desirable for something used as money to have, but this is the essential characteristic. At the moment bitcoin has this characteristic and qualifies for money. However, if bitcoin cannot be freely exchanged for things of value, then it will, like tulips, become worthless.

“I believe that the current run-up in the value of bitcoin is pure speculation, like the Tulip Mania.”

The 5: What if cryptocurrencies — or more to the point, the “blockchain” that underpins them — aren’t an asset at all but an entirely new paradigm of transaction?

The always-colorful John McAfee announced in June that his current cybersecurity company, MGT Capital, would pivot to mining ethereum — the second-most popular cryptocurrency after Bitcoin.

Speaking of the blockchain, this week, he wrote, “Those who understand this tool see immediately the absurdity of words like ‘bubble,’ ‘investment,’ etc. when applied to cryptocurrencies. These thought leaders use bitcoin to buy and sell and those who use bitcoin exclusively as a currency and use no other currency — and I personally know dozens who do so — could not care less about what bitcoin is worth in dollars.”

We know, it’s hard to wrap your mind around. We’re wrestling with it ourselves… which is why, as we promised yesterday, we’re going to get into some of these “heavier” crypto topics next week.

On the topic of the gold charts we shared on Wednesday, a reader writes: “Do you think the elements bent on suppressing the gold price — JPMorgan, HSBC, the Chinese, the Exchange Stabilization Fund, the Fed, the Bank for International Settlements — aren’t looking at the same chart and seeing the same setup?

“Of course they do. They created the pattern you see courtesy of their manipulations of the market. And I’ll bet ya they’ll play those betting on an upside breakout like a fiddle. They have over and over again.

“Bottom line: You can’t trade a rigged market based on technicals … or fundamentals, for that matter. I’ll take that back. You can, but only if you do the opposite of what standard analysis would tell you to do, because the opposite of what you think should happen is exactly what the manipulators will be causing to happen.

“But that strategy’s risky too, because someday those operating the suppression scheme will be overrun by actual market forces.

“Just buy it and hold. Forget the price. Endure the insults of the suppression scheme … and wait for the reset.”

Impressive figures, for sure. But you have to exercise patience to get there.

If you’re not that patient, you might wish to consider this cryptocurrency strategy instead.