Gold Will Not Be Eclipsed!

So far today, the advent of the “black moon” appears to be no more consequential than the much-feared “blood moon” around this time two years ago.

If the end times are nigh thanks to the solar eclipse, it’s not showing up in the major U.S. stock indexes. The Dow is up a bit, the S&P 500 down a bit.

On the other hand, the United States and South Korea are starting 10 days of military exercises today — much to the consternation of North Korea’s Kim Jong Un. So there’s potential for trouble there.

And we’ve also noticed the eclipse’s path of “totality” passes over the Grand Tetons in Wyoming — which will be darkened again later this week by the presence of Janet Yellen and other global central bankers as they gather for their annual conclave at Jackson Hole.

For now, however, it’s gold we have on the brain this morning…

The Russian Central Bank keeps accumulating “sanctions insurance” in the form of gold.

Each month, the central bank discloses the size of its gold stash. As of the latest disclosure Friday, the total is 1,729 metric tons. That’s 12.4 metric tons more than a month earlier. 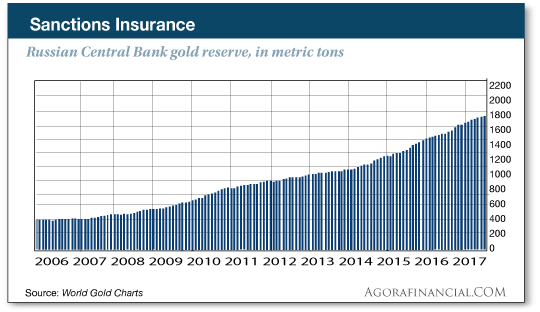 Why all the buying? In an interview with the Pravda website, Alexei Vyazovsky, vice president of the Golden Mint House in Moscow, says, “The Russian Central Bank does so as insurance against the possible seizure of its [foreign exchange] reserves abroad.”

Gold really is sanctions insurance, and Russia has a lot; Jim Rickards is fond of reminding his readers that Russia’s gold stash is the biggest in the world, when measured as a percentage of its economy.

We recall three years ago when ISIS was on the march — evolving from a terrorist group into a functioning, albeit brutal, nation-state in eastern Syria and western Iraq. Its leaders were making noises about establishing a gold-backed currency. We mused about whether that would make gold owners “terrorist sympathizers” in the eyes of the powers that be.

Now in 2017 we can’t help wondering if gold owners will be accused, like the president, of “Russian collusion.” Heh…

For whatever it’s worth, you can even buy gold bullion on Amazon now.

One night earlier this month, our income specialist Zach Scheidt was on Amazon, scouting out textbooks for his kids. “Since I’ve been actively researching gold coins and other precious metals,” he says, “my computer must have cookies that tell Amazon I’m a great candidate to buy gold coins.”

Up popped an ad…

Wow, the markup is obscene. This morning the price is up to $1,485.95. You don’t have to try hard to find the same coin elsewhere online for barely $1,400 — even less if you don’t mind paying by check or wire and waiting for the payment to clear before your coin is shipped.

That said, “it makes sense for Amazon to break into this market,” Zach goes on. “After all, investors are using precious metals to protect their wealth from inflation and a falling dollar. And according to what I’m seeing, this is just the beginning of a major trend!”

What’s good for gold is good for gold stocks: “I expect these stocks to trade higher for the next several years as gold prices advance and profits grow,” Zach tells us.

“With plenty of profits (and plenty of opportunity to grow those profits), miners use extra cash to invest in new mines. Often these miners take on debt to drill more holes and produce more gold and silver. Debt makes sense, management tells us, because profit margins are so big.

“Increasing production eventually floods the market with more ounces of gold and silver. And Economics 101 tells us that when supply is high, prices will naturally drop.

“As gold prices drop, miner profits decline. Eventually, some of the less profitable miners go out of business. Those who remain cut back on production. After all, it doesn’t make sense to invest in new mining operations when profits are falling.

“With global production levels low, the supply of gold and silver ounces in the market dries up.

“Once again, Economics 101 tells us that prices should rise. And as prices rise, the potential for profits in the industry is once again promising.

Which is where we are now with gold about $150 higher than it was eight months ago; at last check the bid is making another run toward $1,300.

But as you probably know, gold doesn’t have a yield. And most of the gold miners pay a paltry dividend at best. And it’s income Zach is after for his readers.

That’s what makes his “cash from gold” technique so attractive. On the first of this month, he showed his premium subscribers how to collect an instant $300 payout off of gold. And, a few days earlier, another $300 payout off of silver.

Zach’s next cash from gold recommendation is due tomorrow. Check out how it works right here. Please note: For reasons that will become obvious when you click on the link, this offer comes off the table at midnight tonight.

The price of copper is knocking on the door of $3.00 a pound for the first time in nearly three years.

Because copper is used for so many things, some investors think it’s a useful economic barometer. “Most investors didn’t believe copper would ever recover from its lows,” says our Greg Guenthner. “Can’t say that I blame them. One look at a long-term chart of the industrial metal reveals a nasty bear market. As the commodity super-cycle topped out in 2011, the metal entered a death spiral that lasted nearly six years.”

Then came a huge rally after the election last November. “After seven months of choppy consolidation,” Greg tells us, “copper jumped back near its March highs late last month and signaled to us that it was ready to make a play at a huge breakout. 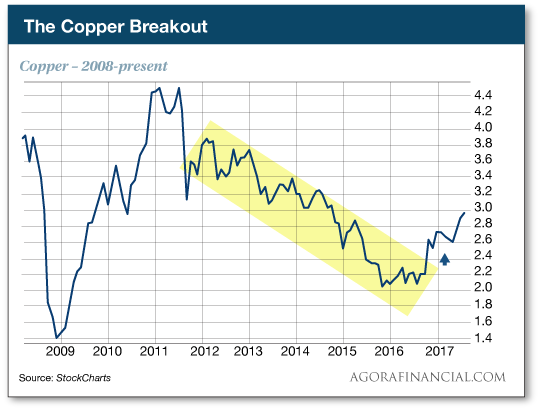 “We don’t know if copper is just getting started on another decade-long bull run or if it’s simply undergoing some mean reversion after years of neglect,” Greg concludes. “Either way, after years of pain and suffering, a sustainable rally is in the works.”

Earlier this year, Ray and our team developed a proprietary Penny Pot Index — a composite of nearly 30 companies. It offers an instant snapshot of the sector as a whole.

For the past few weeks, the index has been headed down. But Ray’s not worried. “Markets don’t move straight up, even in the strongest rallies. Corrections relieve the pressure from the system to keep things from getting overbought. They’re just scary enough to get the weak hands out of the market, and they give stronger traders the opportunity to buy more on the way up.”

Besides, the longer-term picture is much more encouraging. “The correction in pot stock prices that the index has shown us since peaking in July looks a whole lot like prior corrections both in size and duration.” 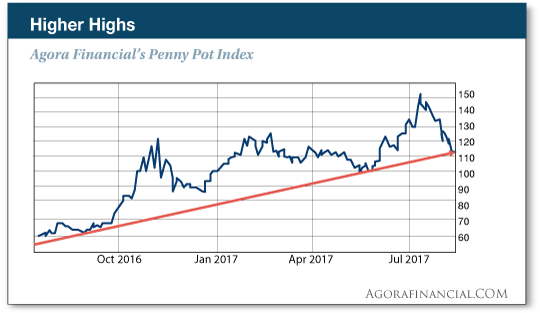 Ray’s conclusion: “If history is any indication, as our marijuana market barometer dips down to its long-term trend line, now looks like a pretty good time to be a buyer.” For access to his favorite names to trade — the average open position in Penny Pot Profits is up 20% and none of them has been open for more than three months — look here.

“Even if I could scrape together the subscription price, why would I as a U.S. citizen spring for a trading service dedicated to a market from which I am legally barred?” begins today’s mailbag.

We should back up a bit. A few of our readers enjoy the parlor game of picking apart our sales messages to figure out, on their own, what the actual investment recommendations are without ponying up for the subscription. Which is their prerogative of course. Some people are more successful than others.

And so one of our readers seeks to weigh in on ICOs — initial coin offerings — in the cryptocurrency market.

“I have read the white papers of at least eight–10 promising-looking ICOs, and so far every single one of them states that citizens, residents and green card holders (taxpayers) of the United States and Singapore are ineligible to participate in the ICO. Once the ICO is over, of course, we are free to purchase the coins on the open market.

“Do Messrs. Basenese and Hutchinson have a loophole or back door for U.S. and Singapore citizens for which they provide the information as a subscription benefit?

“Is this pitch really directed at all of your subscribers except citizens of the U.S. or Singapore? If so, you really should say so.”

The 5: The vast majority of our readers are citizens or residents of the United States. We would never dangle the prospect of enormous gains to sell a premium subscription only to say after the fact, “Sorry, you don’t qualify. Tough noogies.”

In fact, we’re hard-pressed to think of a better way to generate ill will and terrible word of mouth. Nor would we recommend any action that would put our readers in legal jeopardy.

You’re getting warmer with the suggestion of a “back door.” Rest assured all the recommendations will be legal and accessible for U.S readers.

I’m afraid we’re going to have to leave it at that, out of respect for paying subscribers to The Crypto Alert. Access here.

“Many of the complaints made by the skeptics regarding bitcoin and other cryptocurrencies revolve around a power outage and/or an electromagnetic pulse attack,” a reader writes. “How we would be able to access our bitcoin account in the event of such mayhem?

“Hopefully, these folks are aware their versions of cryptocurrency, aka debit and credit cards, and online bank accounts will also be offline with any electrical failure.

“Thanks for continuing to follow the new wave of money — cryptocurrencies — are a natural evolution in the internet age.”

The 5: Good point. In fact, crypto strikes us as more resilient in this regard than the “legacy” electronic accounts nearly all of us use. More about that later in the week…

P.S. Bitcoin sank below $4,000 in weekend trading — the crypto market never sleeps — but now it’s back above that level.

Louis Basenese is convinced bitcoin is on its way to $10,000.

But he’s urging you not to buy bitcoin until you read this — all about the daring $2.2 million bet he just made.