Crypto As a Safety Play (For Real)

One down, nine to go. Obviously, a lot can still go wrong. But for the moment, the markets are shrugging off that prospect. We’ll get to the numbers shortly…

“With easing tensions in North Korea, prices for cryptocurrencies have settled back down,” says our crypto maven Louis Basenese.

Which is remarkable when you think about it. “The fact that I can mention a correlation between political tensions and cryptocurrency prices underscores a major development.”

“Traditionally, gold has been the nontraditional asset of choice. But not this time around! Gold prices barely budged.

“Instead, investors are pouring capital into bitcoin and other cryptocurrencies, thereby establishing the legitimacy of cryptocurrencies as a viable alternative asset class.”

On the rare occasions this year that the stock market has experienced a one-day shock, gold ticked up. “But bitcoin rose radically higher,” says one of Lou’s top analysts, Jonathan Rodriguez.

Here are the numbers he put together for us…

“Of course,” Jonathan acknowledges, “bitcoin hasn’t undergone a true ‘safe haven’ test against a stock market correction (a drop of 10% or more) or even a bear market. And there’s no question that the cryptocurrency market is more volatile than gold.”

Or looked at another way, it’s one more catalyst for the dramatic price moves that carefully selected cryptocurrencies make — far greater than the moves in bitcoin.

“Crypto-quakes,” is what Lou calls them. And he’s anticipating three of them, very soon, that could mint a new class of crypto millionaires. Click here and let Lou show you how you could be one of them.

Now to the markets, where it’s a risk-on day.

Among the day’s top performers is Microsoft — up 1.2%. That translates to a 44% gain in barely 24 hours for Alan Knuckman’s MSFT option recommendation in Weekly Wealth Alert. (Yes, there’s more where that came from — every week.)

Defense names are also doing well now that the president caved to the generals and decided the American empire’s longest-ever war should be waged even longer, and at greater taxpayer cost. ($43 billion a year isn’t enough?)

Back to those U.S.-South Korea military drills for a moment: “Fasten your seat belt,” warns Jim Rickards.

Sometime in the next nine days, Jim says North Korea’s Kim Jong Un will decide Washington is demonstrating bad faith by going forward with the drills. “So he’ll test one of his weapons systems. Trump will respond with more threats, and the world will be right back where it was on Aug. 10, with markets teetering on the brink.”

As noted above, Aug. 10 was one of the four worst days for the stock market this year.

Only this time Jim expects a twist: “Kim may surprise the world with a submarine-launched missile. That’s a big deal because submarines can evade anti-missile defenses such as the U.S. THAAD system deployed in South Korea.

“Submarines can also get close to U.S. shores, which reduces the warning time for an attack. It also reduces the needed missile range so that Kim can kill Americans with smaller and easier-to-produce missiles.

“Kim may also conduct a new underground test of a nuclear weapon. Kim has two programs underway — nuclear weapons and missiles. Both have to be perfected before he has a credible nuclear ICBM arsenal, and both require more testing.”

Jim believes the situation is as serious as any in the last 70 years, based on a government document that recently came into his possession — and driving one small group of stocks much higher.

“A world with an unlimited supply of transplant tissue is on its way,” says Ray Blanco with his take on the recent news that science has taken a huge step closer toward transplanting pig organs in humans.

First, the numbers: “Some 20,000 people have received a transplant this year from nearly 10,000 donors,” Ray tells us. “But we’re suffering from a major organ shortage… and the deficit keeps growing over time.” 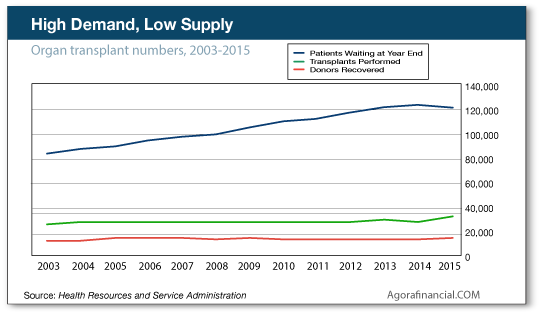 So why pigs? “Pigs have all the same organs that humans have, and their size and structure are remarkably similar,” says Ray. And if science can edit pig genes so the human body won’t reject them, “We could create a new source of working organs for sick humans.”

The breakthrough that made headlines a few days ago is based on something we mentioned awhile back called CRISPR — a gene editing mechanism discovered in bacteria in 2012.

“Researchers have edited one gene sequence responsible for a retrovirus and raised pigs without them,” Ray explains. “One day, they might be able to edit all genes responsible for tissue rejection.

“This advance of gene-editing technology isn’t going away, and enormously profitable new therapies will emerge from current research.” Ray already has readers of Technology Profits Confidential in one gene-editing name… and he has his eye out for more.

But before his visit, he made light of matters in a talk to the Louisville Chamber of Commerce — even invoking his past as a Hollywood producer. “I assume the gold is still there,” he said. “It would really be quite a movie if we walked in and there was no gold.”

The rest of the speech was equally bizarre. “We have approximately $200 billion of gold at Fort Knox,” he said. “The last time anybody went in to see the gold, other than the Fort Knox people, was in 1974 when there was a congressional visit. And the last time it was counted was actually in 1953.”

So why is he the first Treasury secretary to pay a visit in over 60 years? What’s the occasion? Why now? Silence.

It gets better. Mnuchin’s wife, the actress Louise Linton, posted a photo of her arrival in Kentucky on Instagram… 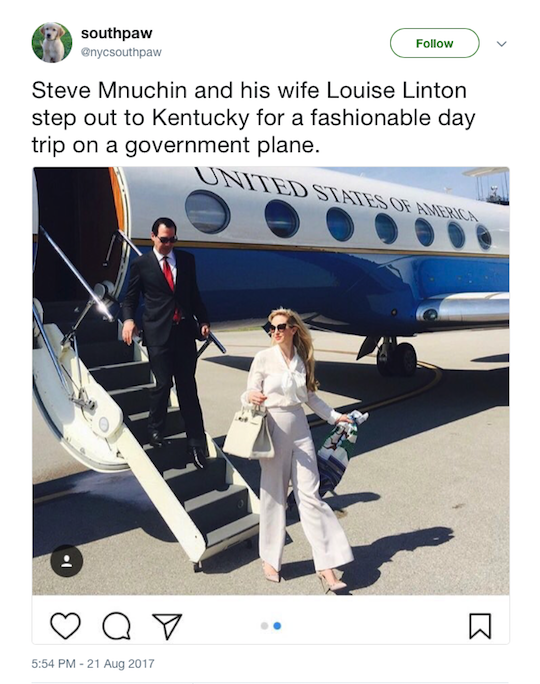 The post didn’t exactly “break the internet,” to use a well-worn phrase… but it did make a small dent. “Glad we could pay for your little getaway,” said one commenter.

Linton responded: “Aw. Did you think this was a personal trip?! Adorable! Do you think the US govt paid for our honeymoon or personal travel?! Lololol.”

The Washington Post tells us Treasury secretaries typically fly commercial within the United States. But the Treasury Department says Linton’s travel costs were covered by the couple, not the government.

Anyway, if Linton had left her remarks at that, none of us would have noticed or cared. But no, she went on: “Have you given more to the economy than me and my husband? Either as an individual earner in taxes OR in self sacrifice to your country? I’m pretty sure we paid more taxes toward our day ‘trip’ than you did. Pretty sure the amount we sacrifice per year is a lot more than you’d be willing to sacrifice if the choice was yours.”

Between the two of them, their backgrounds are in government, Wall Street and Hollywood. The first two of those activities are parasitic and the third is superfluous. But Ms. Linton would have you believe she and her husband are heroes out of Atlas Shrugged. Breathtaking…

To the mailbag: “In responding to your correspondent questioning the ‘worth’ of bitcoin, you suggested that it might be ‘an entirely new paradigm of transaction,’ which to me sounds an awful lot like a euphemism for ‘This time it’s different.’”

The 5: New paradigms are different. They break historical molds.

John McAfee, who we mentioned here last week, likens the advent of the blockchain to the advent of agriculture: “Prior to this adoption, the great thinkers within society struggled with how to determine when to break camp and move to more fruitful lands, how to limit the size of a village so that sheer numbers did not quickly deplete the available food in a new area and how to design lodging so that could be quickly dismantled for a sudden move.

“Imagine how these great thinkers must have struggled to comprehend a world in which the village never moved; where the size of the village was inconsequential; and where lodging was constructed of immovable stone. There would be nothing in their contextual understanding of their culture that would allow them to comprehend the end product of the emerging new world.”

Likewise, it’s hard for us to conceive of a world with a currency that’s not “intermediated” by bankers and the like. But McAfee says that’s the power of the blockchain — “a tool capable of melding ‘decentralized’ and ‘distributed’ into a single unit within which no central authority whatsoever was necessary. The distributed ledger, maintained by no one, accessible to all and validated by consensus is the tool the world has been waiting for.”

We don’t know whether McAfee is right. But we think we’d be foolish to dismiss the idea out of hand…

P.S. Did you play it? Readers of Rickards’ Intelligence Triggers had a chance to collect 43% gains yesterday on Amazon put options. Not bad for 28 days.

Amazon’s lousy earnings numbers are largely responsible for the winning trade. And we’re still waiting for the Trump Justice Department to launch an antitrust investigation into Amazon — which will serve up yet another trade opportunity in the near future. If you want to be on board, here’s where to go.