The day my landscaper starts talking about cryptocurrencies, says Tom Berg, founder of BloKtek Capital, “that’s the day I get out.”

The event promises to be a lulu — the total purse is expected to approach $400 million, depending on pay-per-view sales. The exact split has not been revealed, but reports suggest it could lean as heavily as 70-30 in Mayweather’s favor.

And you were wondering why Mayweather goes by the name “Money.” But no longer…

From now on, Mr. Mayweather says you can address him as Floyd “Crypto” Mayweather. 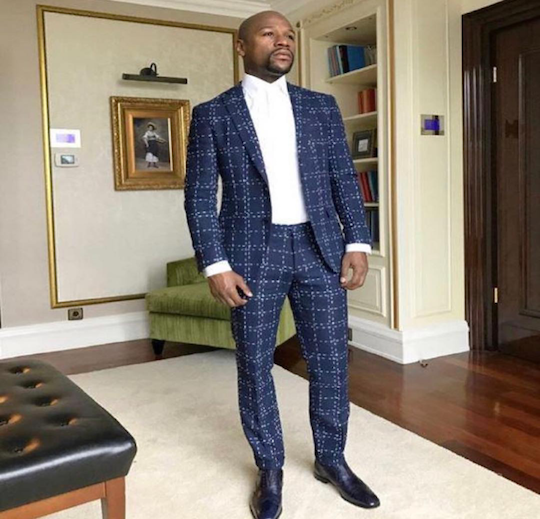 In token of his conversion, “Crypto” is promoting the initial coin offering (ICO) of a startup outfit called Hubii. Mayweather describes the Norway-based Hubii as “smart contract for sports.” We’re not certain what that means exactly… but never mind.

Hubii is actually the second ICO Mayweather is promoting. Last month he blew a bugle for the ICO of a company, Stox by name. It ended up raising $33 million in less than two days.

Once upon a time athletes got behind beer, soft drinks, automobiles. Now they peddle cryptocurrencies.

Touch off the rockets, uncork the bubbly — the cryptocurrency market has set a new record…

CoinDesk and CoinMarketCap inform us that the total value of publicly traded cryptocurrencies surpassed $150 billion this Wednesday — for the first time ever. $154 billion, to be precise.

All to the good of course. But a mere bagatelle compared with what lies ahead…

Ronnie Moas, founder of the equity research firm Standpoint Research, claims the cryptocurrency market will soar from today’s $154 billion… all the way to $2 trillion within a decade. Why $2 trillion?

Moas believes at least 1% of the $200 trillion now socked away in stocks, bonds, gold and cash will find its way into cryptocurrencies over the next 10 years.

Moas sees a direct parallel between today’s cryptocurrency market and the tech market of the ’90s, that gave us the Googles and Amazons of the world.

But as you’ll recall, the great dot-com bubble splattered in 2000. Is Moas concerned about a possible crypto-bubble?

“I am not any more concerned with bitcoin being at a record high than Amazon or Google investors were concerned when those share prices jumped hundreds of percent and hit $100 and $200 many years ago. Today, both of those stocks are above $900. The question is not where we are at — it is where are we going? I do not think we are in a bubble.”

To the best of our knowledge, no one’s asked “Crypto” Mayweather if concerns about a possible crypto-bubble keep him awake at night…

If private companies can launch their own cryptocurrencies, why not countries?

The Baltic republic of Estonia — which once transacted its business in Soviet rubles — is planning to launch its own initial coin offering. It would become the first country in the world to venture upon such an experiment.

Estonia is well ahead of the curve as far as things crypto go. It already uses blockchain technology to keep records in its health care system and its “e-Residency” government ID program. If you wish to open a business in Estonia, you can become an e-resident of the place even if you’ve never set foot on Estonian soil. It’s available to anyone the world over.

The money generated from the ICO would be used to invest in new technologies and Estonian companies.

A foretaste of things to come?

“Eventually governments will adopt digital cryptocurrencies,” argues Fitz Tepper of TechCrunch. “It’s just a matter of when, and in what form.”

Even our own Federal Reserve has levitated the idea of launching its own cryptocurrency. We can only wonder if it too would lose 97% of its value a century later… like the other currency it “manages” has.

Now that we’ve got ICOs on the brain, our resident cryptocurrency go-to-guy Louis Basenese has some urgent information. This coming Monday, Aug. 28, Louis anticipates the most lucrative initial coin offering of all. He believes there will never be another like it. Take a look: But if you’d like to climb aboard this rocket ship, you’ve got to act quick. Remember, this opportunity ends this coming Monday. And Louis says there might never be another like it. Lou and his team guide you through the steps starting at this link. (Bonus: There’s still no long video to watch.)

Time to look in on Monsieur Market…

This morning, Janet Yellen gave what could be her final speech at the annual Jackson Hole powwow. Her term expires in February and there’s an excellent chance President Trump appoints a new Fed chair.

Markets were hoping to divine meaning from her comments this morning. But although she talked a lot… she didn’t say much. She mostly prattled about all the post-2008 banking regulations and spat up little guidance on interest rate policy.

But since no news, bad news and good news is all good news these days… stocks took it as good news.

The Dow’s up 54 points at writing. The S&P is up five of its own. The Nasdaq wasn’t quite as taken with Yellen’s soaring oratory. It’s off a couple points this morning.

The small-cap Russell 2000 had been cruising for the past nine months, notching a high on July 25. But…

“Now the Russell 2000 looks downright terrible,” says Greg. “It smashed below its 200-day moving average for the first time since its November rally last week, switching from breakout to breakdown less than one month after clocking new all-time highs.” 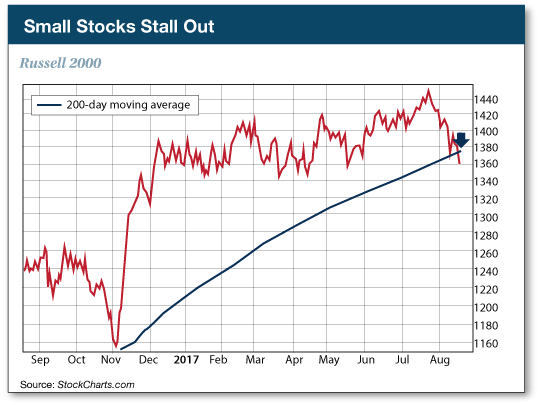 Disturbing — if you’re a small- or microcap investor — but not necessarily the end of days.

Greg says it’s normal for the market to “blow off some steam” now and again. As Greg reminds, “It’s a foreign concept to investors these days — but stocks can still go down.” (Horrifying concept, isn’t it?)

Only if the Russell lags the Dow and S&P for an extended period will Greg hoist a red flag.

“For now, we can only assume that we’re hitting a patch of seasonal weakness,” adds Greg. “August is traditionally the beginning of a rough period for the markets. But it’s not time to rule out a big year-end rally just yet.”

Why did Treasury Secretary Steve Mnuchin parachute in to inspect the Fort Knox gold this week?

Secretary Mnuchin became only the third Treasury secretary in history to visit Fort Knox. And it this was the first official visit from Washington since 1974.

Naturally, Jim Rickards — one of the world’s foremost authorities on gold — took notice. And Jim doesn’t believe the timing was coincidental.

As you likely know, a debt crisis looms in late September. And a possible government shutdown.

Jim says the Fort Knox gold could be a used to work around the debt ceiling if Congress can’t strike a deal in time. How?

“The Treasury could get $355 billion in cash from thin air without increasing the debt simply by revaluing U.S. gold to a market price. (U.S. gold is currently officially valued at $42.22 per ounce on the Treasury’s books versus a market price of $1,285 per ounce.)”

“Once the Treasury revalues the gold, the Treasury can issue new ‘gold certificates’ to the Fed and demand newly printed money in the Treasury’s account under the Gold Reserve Act of 1934. Since this money comes from gold revaluation, it does not increase the national debt and no debt ceiling legislation is required. This would be a way around the debt ceiling if Congress cannot increase it in a timely way.”

Jim says the Eisenhower administration pulled the very same trick in 1953 when faced with the same situation.

Maybe Mnuchin wanted to make sure the gold was still there before they revalue it and issue these gold certificates.

Or perhaps he was trying to pull a reverse Geraldo Rivera act. Maybe you recall when Mr. Rivera opened Al Capone’s secret vault on live television in 1986.

To Geraldo’s great disappointment, it was empty.

In a previous gig, Treasury Secretary Mnuchin was a film producer. Imagine the possibilities if he discovered the Fort Knox vaults were empty — “Where Did the Fort Knox Gold Go?”

From The 5’s mailbag — “Let me see if I have this straight,” one reader writes.

“Mr. & Mrs. Secretary Mnuchin flew to Kentucky to visit the U.S. Bullion Depository at Fort Knox — a United States Army post overseen by the United States Mint — on a plane with a ‘United States of America’ paint job. But according to the Treasury Department, our federal government isn’t covering Louise Linton’s travel costs?

“I wonder how that works. She probably just handed her personal credit card to a ticket agent at USA’s customer service kiosk in the airport terminal. Yes, I can see it all now. Of course there’s no way Foreclosure King Steve will submit that (or his lovely wife’s cab fare) on his monthly expense report.

The 5: That’s adorable: Of course Mrs. Steve Mnuchin swipes her credit card before boarding an Air Force One facsimile for a day trip with the hubby. Right….

One watchdog group wants to get to the bottom of “Mnuchingate.”

Citizens for Responsibility and Ethics in Washington (CREW) filed a Freedom of Information Act requesting “records concerning authorization for and the costs of Treasury Secretary Steven Mnuchin’s use of a government plane to travel to Lexington, Kentucky, on Monday, Aug. 21, accompanied by his wife, Louise Linton.”

The 5 will keep you posted….

Brian Maher
for The 5 Min. Forecast

Well, if you want extra cash for your retirement, forget tracking “penny bitcoins.” ICOs are where the action is.

It’s like the initial public offering (IPO) of a new stock. Because it gets you in on the ground floor of a brand-new digital cryptocurrency before it even hits the market.

Louis Basenese says the next blockbuster ICO happens this coming Monday, Aug. 28. He says there may never be another one like it. So you must act fast if you want to claim your share.