Enough, apparently, to snag a keynote speaking gig on Oct. 16 at an event in Toronto called “Swell” — sponsored by Ripple, the startup backing the fourth-most-popular cryptocurrency… 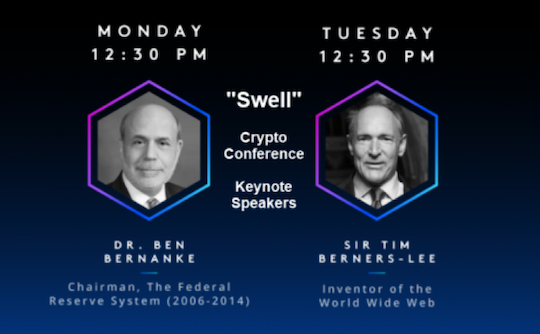 Bloomberg points out that Bernanke told Congress in 2013 that cryptos could have “long-term promise.” But in 2015, he told the website Quartz that bitcoin has “some serious problems,” not least of which is its anonymity. (Of course a creature of the global elite like Bernanke would say that.)

Whatever Bernanke says in Toronto, he’ll be paid handsomely for it. A few months after leaving the Fed in early 2014, The New York Times pointed out he collects $200,000–400,000 per speech. Clearly the people behind Ripple have played their cards well if they can stump up for a fee like that.

Point being, the closer you are to the creation of a cryptocurrency, the more lucrative the profits.

That’s the beauty of ICOs, or initial coin offerings — similar to an IPO for a stock. “In the last month alone,” Lou tells us, “four cryptocurrency projects raised a staggering $660 million.”

And today’s the day the most lucrative ICO of all goes “live.”

You’ve heard more than enough hype from us about it by now. What makes this one ICO so special?

“It’s the first cryptocurrency whose value is based on time rather than on the conventional ‘mining’ solution of mathematical problems,” says Lou.

The team behind it is led by a former Goldman Sachs venture capitalist. “The developers hope that it will become the basis for a series of time-based cryptocurrencies, on which a wide variety of bond, derivatives and other contracts will be based.”

Later today, Lou is sending detailed buying guidelines to readers of his premium advisory The Crypto Alert. For maximum gains, you’ll want to act before midnight tonight. Any later, and Lou says you might regret it the rest of your days. Here’s the link.

Another week, another attempt by gold to bust through the $1,300 barrier.

Today just might be the day: As we check our screens, the bid is up to $1,302. That’s as strong as gold has been since Election Night last year, when traders were on pins and needles awaiting the results from Michigan and Wisconsin.

And that’s genuine demand for gold, not just dollar weakness. In fact, the dollar index is steady today at 92.4. On Friday, the dollar index broke decisively below 93 — a level that had held for 2½ years — when Fed chair Janet Yellen stayed mum about Fed policy during her big speech at Jackson Hole, Wyoming… 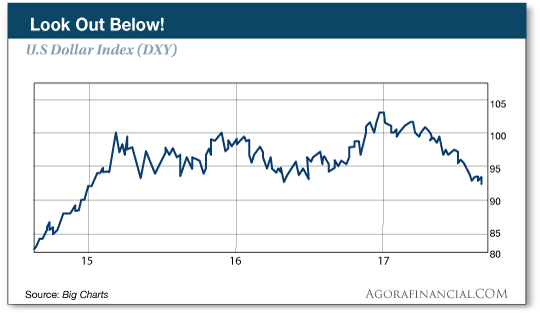 Stocks, you wonder? As a group, there’s not much to say. The Dow is down a bit, the S&P 500 up a bit. The major indexes remain less than 3% below their all-time highs reached earlier this month.

Oil refining stocks are among the day’s winners. Hurricane Harvey has not only drenched metro Houston, but it’s taken about 15% of U.S. refinery capacity out of commission. At last check, gasoline futures are up about 3% today. But crude oil is down 2.4%, a barrel of West Texas Intermediate fetching $46.74.

The big economic number of the day is the trade deficit. It widened more than expected last month to $65.1 billion. That won’t help the third-quarter GDP figures.

Later this week we’ll get the “income and spend” report that includes the core PCE, the Fed’s favorite measure of inflation. And the August job numbers come out on Friday.

Here we go again: American “homeowners” are piling back into home equity lines of credit and cash-out mortgage refinances.

HELOC originations jumped 8% during the second quarter, to the highest level since 2008, according to Equifax. Cash-out refis are up 6% year over year, says Freddie Mac.

To be sure, the total dollar amount of home equity line debt is still declining from the giddy levels of a decade ago. But rising home prices are once again making “free money” look alluring. And banks are more than happy to get the business…

On the other hand, banking insiders don’t seem exactly confident about the future.

“Executives and board members at the top six U.S. banks have been consistent sellers of their own banks’ shares this year,” says the Financial Times after pulling apart disclosures tracked by Bloomberg.

That’s not unusual by itself… but the months-long duration of the selling is. The salmon-colored rag chalks it up to anxiety over the Trump economic agenda passing Congress: “Bank stocks have become ‘a barometer’ for the success or failure of the Trump administration’s policies,” said Robert Smalley, credit analyst at UBS in New York.

Can’t say we didn’t warn you: For nine months we’ve been saying tax cuts and infrastructure spending are likely to run aground on the shoals of a debt-ceiling donnybrook… which is coming in September.

If tax reform ever does get done, the tax-deferred status of your 401(k) is still, to borrow that hackneyed Beltway expression, “on the table.”

Buried within a tedious Politico story about tax negotiations between the White House and congressional Republicans is the following tidbit: “One idea quietly being discussed would be taxing the money that workers place into their 401(k) savings plans upfront: an idea that would raise billions of dollars in the short term.”

That is, your pretax 401(k) contributions would be turned into after-tax contributions like a Roth-style plan. Washington number crunchers figure it would add up to $584 billion in additional revenue by 2020.

We warned you about this four months ago: It’s a hobbyhorse for Trump’s chief economic adviser, “Goldman” Gary Cohn. And Cohn emerged victorious this month from a power struggle with the now-departed White House aide Steve Bannon.

Maybe we can breathe easier: China and India are stepping back from the edge of war.

In June, Indian troops ventured into disputed border territory — aiming to stop a Chinese road-building project. The standoff threatened to blow up into full-scale war as happened in 1962… only back then, neither China nor India possessed nuclear weapons. The situation was sufficiently volatile — and  grossly undercovered by establishment media — that we’ve made a point of doing updates every couple of weeks.

Fortunately, the threat level appears to be diminishing after weeks of talks. India’s foreign ministry says its troops are “disengaging” from the territory. Chinese media are celebrating the departure of the “trespassers.”

That said, the border is still disputed… and there’s no word about whether China will go ahead with the road project anyway.

“You have to be kidding me!” begins today’s mailbag.

“Last week in The 5, where Steve Mnuchin and his wife Louise Linton are bragging about the taxes that they have to pay, is bad enough. But when it came to their ‘self sacrifice’ for the country that was just plain over the top.

“I suppose that they have personally faced down armed killers as police officers and battled the Taliban as members of the U.S. military? These ‘legends in their own minds’ need to get out into the real world once in a while. No wonder that so many people think that those in Hollywood aren’t completely sane.”

“In all the hype surrounding bitcoin and other cryptocurrencies,” reads our next entry, “your readers may want to hear from a veteran like me, since I’ve been investing in this space for a week and a half.”

“It feels like I’ve walked into a casino with no idea of the odds at any of the tables or machines. There are no earnings streams to back any of the prices, just Hopium-fueled speculation of ‘This could be really cool someday.’ I’m reminded of internet stocks in the late ’90s.

“I bought a little bitcoin (at the absolute top), lost 10% in a few days but that wasn’t a problem because I was able to exchange it into a Chinese-backed crypto that lost another 15% in a day.

“Not saying there is no ‘there there’ for the crypto space, but I strongly suggest a guide like Louis Basenese, to not make the mistakes I’ve made.”

The 5: Rest assured Lou has a five-step screening process to analyze all of the 900-plus (!) cryptocurrencies out there. If it doesn’t make the cut, he doesn’t recommend it.

“I’m considering a subscription to The Crypto Alert,” writes our final correspondent, “but I have several concerns.

“You use massive marketing hype to sell all of your services, but in this one your sales copy team found a new high (or low, depending on your perspective). I assume your $2.2 million investment in this (mentioned in your sales page) ICO was acquired for far less than any of us will pay for the ICO. This automatically makes me fear a ‘pump and dump.’ It would be reassuring if it were stated on your sales page that your company (or any subsidiaries, affiliates, etc.) will not sell any of the recommended ICO coins for a certain period of time.

[Whoa, whoa, whoa. We have to interrupt the reader right here. The $2.2 million is how much our publishers have committed to salaries for conducting this research. Our editors are strictly forbidden from investing in the securities they recommend, and other employees can invest only after the recommendations are published. That’s one of several safeguards we take at Agora Financial to make sure we’re acting only on behalf of our readers.

That said, please go on, sir…]

“There has been widespread speculation in online forums as to what the ICO is, by parsing your sales page (that mentions Aug. 28 as the ‘date’). Some speculate if that’s the day after the ICO ends (which perhaps means it ‘goes public’) or if that’s the day the ICO starts.

“Also, is the ICO revealed at the time one purchases The Crypto Alert service or is that held until a specific date/time? If held, I’m concerned that it will be East Coast biased and anyone on the West Coast not awake at 5:00 a.m. will likely get shut out (if this is a ‘capped’ ICO).”

The 5: You’re not the first person to raise the U.S. citizen concern. The vast majority of our readers are U.S. citizens or residents; Lou’s recommendation is legal and accessible for U.S. readers.

As indicated earlier, Lou will furnish details to subscribers of The Crypto Alert this afternoon on how to buy. New subscribers will get instructions on how to access these details as soon as they sign up. It’s in our interest to make the process as seamless as possible for you the reader.

But again, the process can take place only if you make the first move. And it’s best to do so by midnight tonight. Here’s where to do so.

P.S. It’s a “crypto-quake” in action: This morning Lou Basenese urged his Crypto Alert readers to take 200% profits on a position he recommended less than three weeks ago.

If you want in on the most lucrative “initial coin offering” ever — the “last best chance” to profit from the red-hot cryptocurrency market — the time to move is now. After midnight tonight will be too late. One final time, click here for access.