A Sticky Moment for Crypto

Another day, another record in the cryptocurrency market.

The total market capitalization of global cryptocurrencies stands at $164 billion. When last we took note of the number five days ago, it was $154 billion.

That’s a stunning trajectory — from $18 billion at the start of the year to $100 billion in early June to today’s dizzying heights. 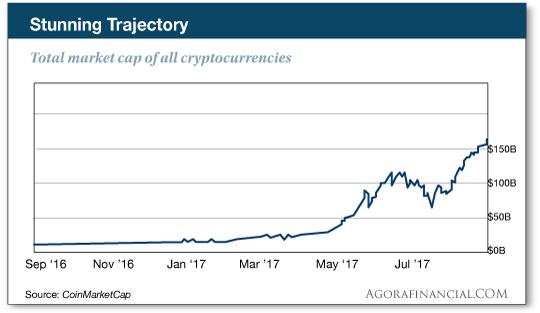 The jump this month is even more impressive when you consider bitcoin, the original crypto, has spent the last two weeks going nowhere — oscillating between $4,300 and $4,600.

All of which raises a logical question, one which some of our readers have asked. Is crypto in a bubble?

Now, don’t get the wrong idea. We haven’t been leading you down the primrose path with crypto this summer. From the outset we’ve said you have to choose carefully from the 900-plus cryptocurrencies out there.

And an asset class in a bubble can serve up tremendous profit opportunities. “The opportunity is never going away,” James tells us, “and generational wealth will be made.”

As he well knows. James has had a hand in the crypto market since 2013. He sold his book Choose Yourself in a bitcoin-only store he created a month before it was released on Amazon. He’s had a hand in some ICOs — initial coin offerings — these last 18 months. And he’s made $1.8 million off a single crypto trade.

“The evolution of money, and the evolution of every industry, strongly implies that cryptocurrencies, probably in many forms, will be in our future,” James says. “And will dominate the money supply at some point.

“And how we get from ‘here’ to ‘there’ will be paved with many lucrative opportunities.”

Before we go further, let’s tackle another question that’s likely on your mind: Don’t we already have a crypto guru at Agora Financial in the person of Lou Basenese?

Yes we do. But if crypto is set to “dominate the money supply,” then we’re talking about an asset class so significant that there’s room for more than one expert on the subject in our stable. Indeed, there’s a screaming need for it.

After all, we have several editors who recommend stocks… and no one thinks that’s unusual. It’s a big universe of stocks out there — growth, value, large cap, small cap. That’s the way crypto’s moving too.

But for all its future potential, crypto is at a sticky moment right now. Everyone has an opinion. And “everyone is convinced they are right,” says James.

“That’s a bad sign. I always tell myself I’m the dumbest person in the room. Then I call the smarter people and ask them lots of questions. And then I read everything I can. And in this case, I read the code.

“The solution is research, diversification, building a network of intelligence people who understand all the relevant issues and then making smart allocation decisions.”

James has now distilled this wisdom into a book called Cryptocurrencies 101: How to Make a Fortune From Digital Currencies.

It will address many of the questions you might have. We’ve done our best to address them this summer, most recently last Thursday. We got a little pushback after that episode of The 5: “Your primer did not address any true fundamental questions,” a reader wrote, “I’ve searched widely — booklets, articles, online comments — everywhere. No answers — maybe I am truly a cretin and cannot see the forest because of all the trees.”

Not at all. Crypto is a big and complex subject, hard to get your arms around. But now James has done that work for you. If you’ve hesitated to pull the trigger on crypto, you now have access to the definitive beginner’s guide.

The book is available only through us — not Amazon nor anywhere else. Click here and reserve your copy today.

To the markets, where gold is holding the line on $1,300 despite some upbeat economic numbers.

The Commerce Department delivered its latest guess at second-quarter GDP. At an annualized 3.0%, it’s higher than the first guess, and higher than the “expert consensus” was expecting. Meanwhile the payroll firm ADP is out with its estimate of new private-sector jobs for August, and it too was better than expected.

In theory that means the Federal Reserve is more likely to “tighten” monetary policy as 2017 winds down. So traders are using the economic numbers as an excuse to bid up the dollar and sell off gold. Nonetheless, gold is hanging tough at $1,308.

(In reality, Jim Rickards says the Fed is done with interest rate increases this year; when that finally dawns on traders, gold is likely to enjoy another bump up.)

“The dollar’s drastic decline has arguably been one of the main drivers of gold’s resurgence this year,” writes Greg Guenthner in today’s Rude Awakening. “The buck looks ready to hammer out a short-term bottom – a move that could kill gold’s momentum, forcing traders to wait for a hard reset before we see an attempt at those elusive 2016 highs.”

Which, we hasten to add, he still anticipates…

That’s despite Hurricane Harvey shutting down one of the most prolific shale-energy deposits in the country, the Eagle Ford. About 15% of U.S. oil production is out of commission, and might not come back online for weeks.

But as we mentioned on Monday, about 15% of U.S. refinery capacity is also out of commission. Add it up and it’s a peculiar situation with falling oil prices even amid rising gasoline prices. “As oil refineries went offline ahead of the storm, there was less demand for oil inputs,” explains our income specialist Zach Scheidt. 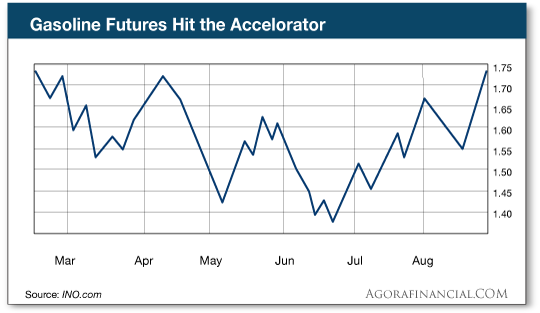 That said, the impact on the refiners hasn’t been uniform… and Zach says that’s serving up an interesting opportunity.

“Refinery companies with locations outside of the affected areas should enjoy higher-than-normal profits thanks to the challenges competitors are facing.”

“Under this scenario,” says Zach, “refineries are now able to sell their refined gasoline at a much wider profit margin. And many of these refineries also have the option of locking in higher profit margins by setting up long-term hedges at today’s prices.

“So refiner companies still operating should increase their profits over the next several months. And those higher profits are driving stock prices for specific refiners higher.”

[Ed. note: Yesterday in his premium advisory Income on Demand, Zach showed how these fattened refiner profit margins could fatten readers’ portfolios — with an instant $400 income payment. To learn more about Zach’s “perpetual income strategy,” check this out.] 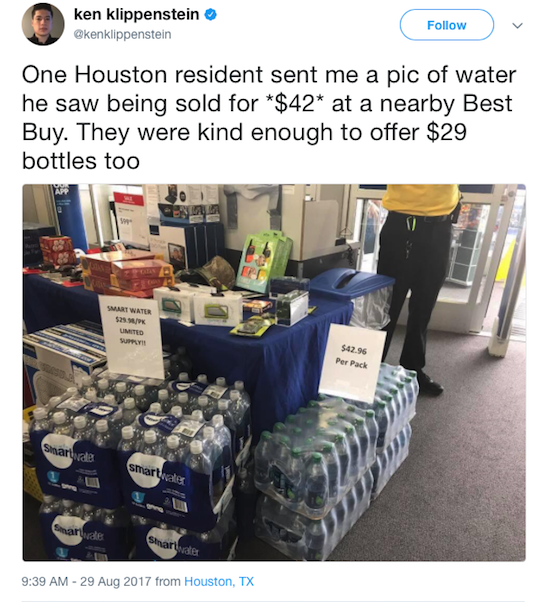 It’s not just reporters on Twitter generating outrage. Texas Attorney General Ken Paxton is getting in on the act too. “These are things you can’t do in Texas,” he says. “There are significant penalties if you price gouge in a crisis like this.”

Quips the one and only John Stossel, writing these days at Reason: “Texas, a state that I thought understood capitalism, punishes people who practice it. Prices should rise during emergencies… Price changes tell suppliers what their customers want most, maybe chain saws more than blankets, water more than flashlights.”

George Mason University economist Don Boudreaux, tilting at windmills, wrote an open letter to Attorney General Paxton: “By forcibly keeping ‘legal’ prices lower than their actual market values, you not only encourage black markets… you obstruct the information and incentives that are necessary both to encourage consumers to use those goods more sparingly and to encourage suppliers from around the world to rush to the devastated areas.”

In any event, Best Buy has been shamed into calling the incident a “big mistake.” The chain doesn’t usually sell water by the case, it explained, and workers priced the cases at the single-bottle rate.

“If you still think the war on cash has not been won by cash, please explain the truckloads of cash needed in Houston,” a reader writes.

The reader points us to a CNBC story citing former Dallas Fed chief Richard Fisher: “Fisher explained that banks will send their armored vehicles to the Fed — either bringing currency back or taking currency out — and then circulate it through the system.” It turns out Houston is home to the biggest vault in the Federal Reserve’s nationwide complex.

Says the reader: “The cashless system that you guys say is here (it is not, and will not be in my lifetime) isn’t working so well. They need food, water and cash!

“If the $100 bill were not in circulation the Feds would need five times as many armored cars to haul the same amount of cash — not happening. WTSHTF we find out in a hurry what ‘real’ money is.

“Perhaps all the cash in Oregon, Washington, Nevada, Colorado, Alaska and Hawaii, where recreational weed is legal, is causing a shortage in a state like Texas, where no weed is legal. Being from southwest Oregon I have seen in person the huge wads of cash being used to pay for supplies and equipment for weed production. Cash is alive and well and it is silly to argue otherwise.”

The 5: Uh… marijuana is an all-cash business specifically because it remains illegal under federal law and as such the banks want nothing to do with it.

Gallup polling says in 2011, 36% of Americans reported making all or most of their purchases with cash; by last year it was down to 24%.

No, we’re not Sweden yet — where at more than half the banks, you can’t deposit or withdraw cash — but that’s the direction things appear to be moving.

We didn’t say we liked it…

“I have enjoyed reading The 5 for years, BUT…

[Ah, our longtimers know the drill.]

“Come on, guys, keep it factual.

The 5: Are your air-quotes implying we fabricated the reader testimonials? That kind of fakery is a firing offense around these parts, we’ll have you know…

Look, we were upfront about the second half of the sell recommendation not yet being filled. But since the options don’t expire until a week from Friday, there’s still plenty of time for events to play out. And the first half of the trade — a 63% gain in 84 minutes — is real money, not paper profits…

P.S. We neglected yesterday to include the link inviting readers to subscribe to Alan Knuckman’s Weekly Wealth Alert. In case we whetted your appetite about that 63% gain in 84 minutes and your desire went unmet… here’s where to go.