“This is the most uncertain time I’ve ever seen in my life, and I’ve been doing this for more than 25 years as a veteran trader.”

So said our man at the Chicago Board Options Exchange, Alan Knuckman, during a chat last week.

Since that chat, North Korea has conducted another underground nuclear test… and on the heels of Hurricane Harvey, Irma has strengthened to a Category 5 and appears to have Florida in its sights. Storm relief is sure to figure into the budget and debt ceiling debate this month.

We’d asked Alan how politics figures into his trading strategy. His laundry list of global woes was a windup to a core trading principle…

“This all reinforces my No. 1 theory,” says Alan: “You should focus on price not policy, not politics.

“‘What does the price tell us? That’s what we want to focus on. And right now the prices of the Dow and S&P tell us the markets don’t care. Donald Trump didn’t make this market, and Donald Trump’s not going to break this market.

“You can’t ignore the seven-year rally in the market before Trump took office. Simply put, I look at this recent action as an extension of the solid reversal/bottoming action in 2008/2009. That renewed growth and economic foundation is what put the market in this kind of position where corporations are doing what they’re doing. (And they’re doing great, by the way.)” 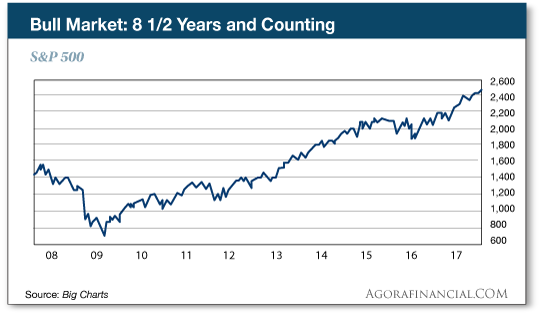 “So it has nothing to do with the policies or the politics. Instead, focus on the price.”

Which is exactly what he’s been doing with gold lately — focusing on the price.

Gold sits at $1,336 this morning. It popped again the moment after electronic trading resumed Sunday night — hours after the North Korean nuclear test.

“A few weeks ago,” says Alan, “I was wandering around the Agora Financial office in Baltimore and I physically took a couple of people and I stuck their head in the chart to show them what was happening in gold.

“In the trading pits everyone sees the action. In the real world you have to really wave your arms to get folks to look. So that’s what I did. The charts don’t lie! And finally gold broke out above $1,300 an ounce and now we’re seeing 2017 highs. That’s a classic breakout. 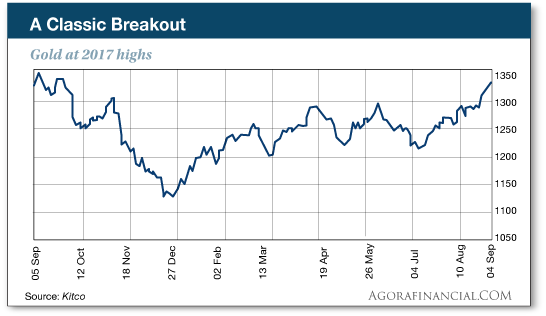 “When you look at what’s happening in the U.S. dollar it all makes sense,” he explains. “We saw the dollar make new 18-month lows.

“So it’s not just gold; it’s a much larger currency play. The major head wind facing gold in recent years was a strong dollar. That’s all unwinding now. And there’s no real strength in sight for the greenback. We’re not raising interest rates anytime soon at all. And looking at the numbers, to get to a 50% or greater chance of our next rate hike, we have to go all the way out to March or June of 2018. So a rate hike is not even on the radar.

“Simply put, if there’s no rate hike and the dollar doesn’t go up, I think gold continues to break out to the upside. I’m looking for that to continue.”

Last Monday, Alan urged his Weekly Wealth Alert readers to play gold’s trend by buying call options on Newmont Mining (NEM). Within 90 minutes the position was up 60%, and he urged readers to sell half the position. With gold at an 11-month high this morning, the other half of the trade looks great as the options’ expiration date approaches this coming Friday.

Alan’s been hearing from happy readers since the launch of Weekly Wealth Alert earlier this summer. “I made $1,309 in hours — I took advantage in the first move and sold. Thank you!” says a reader who adds that his gains amount to more than his Social Security check.

With the help of a patent-pending tool Alan has access to, you can collect similar gains. But you’ll want to move quickly: For reasons you’ll see when you click, this presentation of Alan’s comes offline tonight at midnight.

Do you mean next Friday, the usual expiration date?

Whether it’s North Korea or some other reason (or no reason at all), the major U.S. stock indexes are in the red on this first trading day that Wall Street’s big boys are back from their summer hideaways in the Hamptons.

Meanwhile, there’s a freakout in the cryptocurrency markets… and our James Altucher couldn’t be more excited.

Yesterday, the Chinese government banned initial coin offerings (ICOs), the newly “minted” cryptocurrencies. Even established cryptos took a hit on the news. Bitcoin tumbled 7%; ethereum took a more substantial 14% spill. Both are stabilizing today. There’s a reason ethereum was hit harder, which we’ll get to shortly.

“China is doing in the ‘China way’ exactly what the SEC in the United States did a few weeks ago,” James tells us by email this morning — “saying that many ICOs are a scam. The SEC has given guidance that they will keep a closer eye on ICOs… China, rather than just giving notice, has put on a ban so they can take a closer look. This is more their style.”

Then again, “there is always a good reason and a real reason,” James says — always on the lookout for a deeper story that can serve up opportunity.

“Most ICOs,” he explains, “are built on top of a crytopcurrency called ethereum (ETH), which is different from bitcoin. China is the largest ‘miner’ in the world of bitcoins. So they want to put a pause on ethereum to potentially bolster their bitcoin holdings… China’s bitcoin mining operations are in the billions of dollars and very important to China. With the fast rise of ICOs that are ethereum based, they needed to give this a pause while they figure it out.”

Bottom line — zero impact on bitcoin. “Does this mean I’d buy bitcoin at $4,000?” James asks. “Maybe. But since bitcoin is up from $2,700 just a month ago, I’d leg in a little (my gut reaction on irrational selling) but also wait for a bit more volatility as people continue to absorb the news over the next few days.

“I’d also buy any dips in Nvidia (NVDA) and Advanced Micro Devices (AMD), which are the chipmakers behind many of the China bitcoin mining computers.

“Eventually, China will stop their ban on ICOs once they A) figure out how to make money on them (like they do with bitcoin) and B ) weed out the scams, which they will.”

In the meantime, China has just triggered what James calls “a large event that will cause many people to trade irrationally that will give us future opportunity.”

[Ed. note: James is still offering access to his cryptocurrency master class — complete with the ideal study guide, Cryptocurrencies 101: How to Make a Fortune From Digital Currencies. In this new book, James distills his wisdom gained from his early involvement in the crypto markets — including a single trade that generated $1.8 million.

You won’t find this book on Amazon. Here’s the one place you can claim your copy.]

Here’s another “large event” from China… but this one’s flying completely under the mainstream radar.

“China is expected shortly to launch a crude oil futures contract priced in yuan and convertible into gold in what analysts say could be a game-changer for the industry,” reports the Nikkei Asian Review.

China is the world’s biggest importer of crude… but crude is priced in dollars. “China’s move,” the report continues, “will allow exporters such as Russia and Iran to circumvent U.S. sanctions by trading in yuan. To further entice trade, China says the yuan will be fully convertible into gold on exchanges in Shanghai and Hong Kong.”

“China has long wanted to reduce the dominance of the U.S. dollar in the commodities markets,” the article reminds us. There’s a long arc to this story, and it’s still early days. We’ll be staying on top of it…

“It’s scandalous all right,” a reader writes us about the “newly discovered” bogus accounts at Wells Fargo.

“But you have to wonder what customers Wells Fargo has, if millions of them don’t notice charges being made on accounts they didn’t know about and they are dumb enough to pay the fees on them.

“People ought to be fired, but that should include accountants, etc., working for the bank’s customers, who simply pay any bills that come across their desks. If you think the Wells case is unique, think again. This scheme of sending fake invoices, counting on the inattentiveness of client clerks, is a profitable enterprise.”

“Seems that way to me the banks and the government can have their cake and eat it too. Eliminate all the paper currency, force people to where anyone can be shut out of their account by a simple phone call or the stroke of a computer keyboard. And anyone caught using the outlawed nonbank cryptocurrency is obviously a terrorist who deserves the harshest punishment. Brave new world? More like ‘Back to the medieval future.’”

The 5: Here’s an even bigger mind-bender, one we hinted at last month: What happens when “quantum computers” are capable of breaking a blockchain password in the space of less than 60 seconds?

Quantum computers are as speedy and powerful as the name implies. “The question is who is going to have them, and the answer is mainly governments, but big corporations are buying them like crazy,” says Philippa Malmgren, who served on the President’s Working Group on Financial Markets — aka the Plunge Protection Team — during the Bush 43 administration.

In an interview last July during the Macro Voices podcast, she said, “We are going to see major corporations buying that computer power. The question then is who has most transparency over the blockchain and e-money, and I would argue it is going to be whoever has the most and fastest processing power, which may be governments at times, it may be private at times, it may be fluid.”

P.S. This video could change your retirement dramatically for the better… and in a huge hurry. But after midnight tonight, you won’t be able to watch it. Here’s your last chance.