Another Blip On Crypto’s Radar

Oh, here we go again with the freakout over China and cryptocurrencies…

Last Friday, word began filtering out of Beijing that the authorities there plan to shut down the country’s bitcoin exchanges.

The “plunge” that resulted has taken bitcoin’s dollar price back to levels last seen… uh, three weeks ago. 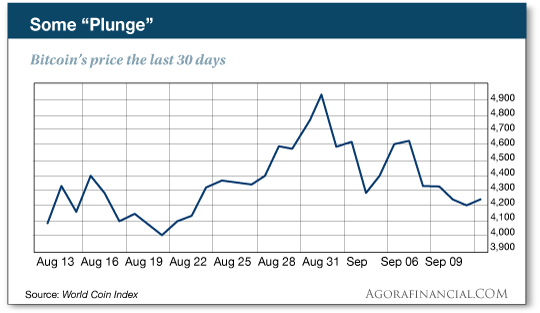 This morning’s Wall Street Journal gives front-page, above-the-fold treatment to the story. “The move could send shock waves through the burgeoning market for virtual currencies and hundreds of new companies that have sprouted up to take advantage of the open-ledger technology that underpins bitcoin.”

That was the third paragraph.

Deeper in the story, it turns out a lot of crypto trading in China has been moving off the exchanges anyway. People are trading with each other privately — “peer to peer,” as the tech-savvy call it.

From the next-to-last paragraph: The Journal’s sources “said that regulators will likely have to tolerate noncommercial trading of virtual currencies. ‘The government also doesn’t have the power to control’ that, one of the people said.”

Whatever. It’s a lot more exciting to suggest THIS IS THE END FOR CRYPTO. More eyeballs, more clicks. Besides, who reads beyond the third paragraph before sharing their opinion on social media these days?

Oh, well. We had to knock down some of the crepe-hanging last week too, when China’s central bank banned ICOs — the initial coin offerings comparable to an IPO for a stock. Sure enough, it’s turning out to be a speed bump for the best-of-breed ICOs.

[Ed. note: The ICO we’ve been telling you about since last month — the one Lou Basenese is so excited about — will “go live” tomorrow morning.

It’s the linchpin of a $241 trillion opportunity… but the window of opportunity is slamming shut as we write. Click here for your final opportunity to review this research briefing.]

If September’s supposed to be a terrible month for stocks, it hasn’t played out that way yet.

Historical data notwithstanding, the S&P 500 notched a record close yesterday, and it’s inching higher into record territory as we write at 2,493. Gold is losing a bit more ground at $1,329, although it still looks great compared with two months ago.

Small-business owners appear to no longer care about progress in Washington on tax cuts or Obamacare repeal.

The monthly Optimism Index from the National Federation of Independent Business clocks in this morning at 105.3, the highest in six months. “Consumer demand is very strong, and the regulatory relief has been dramatic,” says NFIB president and CEO Juanita Duggan.

On the downside, finding good help is nearly as big a headache as taxes, judging by the revealing “single most important problem” part of the survey… 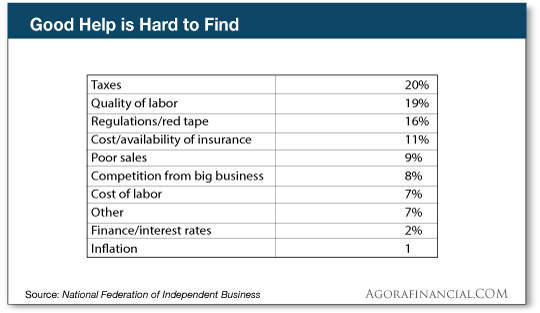 “Quality of labor” was cited by only 8% of survey respondents a year ago, compared with 19% now. Another noticeable jump is “cost/availability of insurance,” up from 5% a year ago to 11% now. So on further reflection, the lack of Obamacare repeal does matter to small-business owners, even if it doesn’t show up in the headline number…

For the record: The national debt has “finally” topped $20 trillion.

After the president signed a bill last Friday lifting the debt ceiling till mid-December, the U.S. Treasury re-ran its numbers. The debt jumped to $20.16 trillion. Just for the heck of it, we compared that with a year earlier. The total was $19.48 trillion.

That makes for an increase of $680 billion in 12 months — a rather higher figure than the official “budget deficit” figures you hear coming from Washington.

But that’s how the system works. Forget the official numbers and watch the growth in the national debt. (Looking at these more honest numbers, there never was a “balanced budget” in the late 1990s, as Bill Clinton and Newt Gingrich love to crow about.)

“The beginning of the end of the petrodollar system,” is how Jim Rickards describes the news from Beijing.

Last week we mentioned how the Chinese are planning to launch an oil futures contract priced in yuan… and convertible to gold. Thus can Russia and Iran do an end run around U.S. sanctions. Jim says it amounts to “a new international monetary order that does not involve U.S. dollars.

“It has several parts, which together spell dollar doom. The first part is that China will buy oil from Russia and Iran in exchange for yuan. The yuan is not a major reserve currency, so it’s not an especially attractive asset for Russia or Iran to hold. China solves that problem by offering to convert yuan into gold on a spot basis on the Shanghai Gold Exchange. This straight-through processing of oil to yuan to gold bypasses the dollar completely.

“China also offers gold hedging facilities on the Shanghai futures exchange to cover any foreign-exchange risk on the conversion of yuan to gold. Importantly, this establishes a yuan-denominated benchmark price for oil at the same time.”

For more than 40 years, Washington has ruled the global monetary roost by propping up Middle East dictators in exchange for those dictators pricing their oil in dollars. That entire system is now at risk.

And it’s not just the Chinese, Russians and Iranians who are in on it.

Last week China hosted a meeting of leaders from all the BRICS nations. In addition to China and Russia, this group includes India, Brazil and South Africa — 45% of the world population and 25% of the global economy.

Said Russian president Vladimir Putin, “Russia shares the BRICS countries’ concerns over the unfairness of the global financial and economic architecture, which does not give due regard to the growing weight of the emerging economies. We are ready to work together with our partners… to overcome the excessive domination of the limited number of reserve currencies.”

Heh, there’s only one global reserve currency — the dollar. At the risk of being labeled Russophiles, we dig Putin’s penchant for dry humor.

Jim’s conclusion: “U.S. investors cannot easily store oil or hold yuan in their portfolios. The only prudent course to avoid this dollar demise is to do what the Chinese, Russians and Iranians are doing — hold gold.”

Will Equifax need a bailout thanks to its colossal data breach?

The question occurs to us upon seeing that Equifax’s insurance coverage might not be enough to cover the costs resulting from its negligence. That’s according to a Bloomberg story citing “people familiar with the coverage.”

“The company holds a policy that would probably cover about $100–150 million, with costs shared by carriers in the London market and elsewhere, said the people, who asked not to be identified discussing a private contract. Though Equifax’s eventual expense may not be known for years, it could be multiples higher than the insurance payout.”

Can’t you just see Wall Street’s best and brightest converging on the White House? “If Equifax goes under, the wheels of the economy will grind to a stop. Without their data, we won’t be able to write new mortgages or car loans or flood people’s mailboxes with new credit card offers. Human sacrifice, dogs and cats living together, mass hysteria — Equifax and the other credit-reporting companies are too big to fail!”

[By the way: All the advice people are getting about how they should freeze their credit? Here’s what some of them are seeing when they try to do that at Equifax…

In any event, a credit freeze doesn’t fully protect you. While an identity thief won’t be able to open a new account in your name… he can wreak havoc with your existing accounts.]

We’re not done talking about China today. We just heard from a reader who says he’s on his fourth or fifth visit to Beijing since 2008. “The good side of cashless, in China at least,” is his subject line.

“It is exactly three years since my last visit and so much has changed,” he writes. “Before there were few bicycles and all were privately owned. Now there seem more bicycles (rentals, and I counted four companies so far) than there are cars. Also rental scooters and car shares. I’ll get to why that’s important in a bit.

“Now there is WeChat and Alipay everywhere. There is literally nothing you cannot do or buy with it. It is super-simple to use. You simply scan the merchant QR code, enter the amount and authorize payment. The merchant is paid instantly and you are debited instantly. Everything has a detailed record. You can tie a bank card, credit card, gift card, etc., or just have a family member send you money to recharge.

“Those bicycles, scooters and car shares mentioned earlier? They all have QR codes. Just scan the code, you are authorized and they unlock. Away you go. I have only used the bicycle so far. Really super-cheap. A 10-minute ride across town cost me only 1 rmb, or something like 15 U.S. cents, and I can leave the bike anywhere and not have to find a special location. I have used WeChat Pay to pay for groceries, meals, clothes, etc.

“Now, it must be noted that you need a minimum of a Chinese phone number to use many of the features. No big deal, as you can go to any mobile store such as China Mobile, China Unicom, etc., and simply buy a sim card for your phone and you are good to go. In my case I just registered using my mother in-law’s phone number and had my stepson send me a hongbao money transfer to get started.

“The U.S. has nothing even close!” our correspondent goes on.

“Apple Pay and even bank card pay by phone are too complicated. You have to be ready, the terminal has to accept it and you still have to sign and or enter a pin. It’s a joke, as simply swiping or inserting your card is still faster than any U.S. digital wallet or phone pay. Oh, and very, very few places are set up to accept it yet, so even if you want to try to use it, most times you cannot.

“WeChat pay also allows for utility payments, charity donations, loans, airlines, subways, taxis, buses, hotels, even the ability to buy high-interest bonds, etc. It’s as if China in just three years has leaped ahead of the U.S. financial and commerce markets by at least 10 years.

“I am really, really going to miss the convenience of WeChat Pay when I am back in the U.S. I can only hope that WeChat and Alipay are eventually allowed full entrance to the U.S. markets.”

The 5: Ehhh, not with the trade war that’s shaping up…

P.S. So as we go to virtual press, JPMorgan Chase CEO Jamie Dimon has declared bitcoin a “fraud.”

Projecting a bit much, are we? 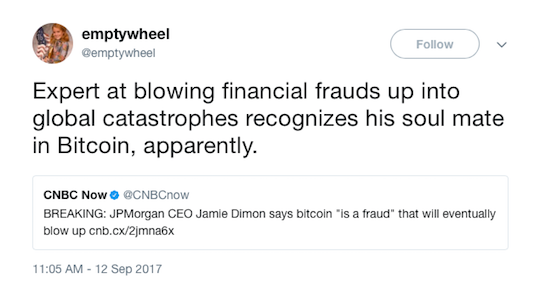 Look, we’re the first to acknowledge a proliferation of shady characters in the cryptocurrency world. But to use bitcoin as a proxy for all cryptos and declare them all fraudulent is preposterous.

And frankly, we find the timing a little, well, curious. With only hours to go before the launch of a game-changing initial coin offering?

Maybe the establishment is running scared… because of this?