The Demise of the Dollar Accelerates

Sheesh… Is the Trump administration trying to kill off the U.S. dollar’s status as the globe’s reserve currency?

Yesterday during a conference in New York, Treasury Secretary Steve Mnuchin threatened sanctions against China if Beijing doesn’t carry out Washington’s wishes when it comes to North Korea.

But not just any sanctions. Mnuchin threatened to “prevent them from accessing the U.S. and international dollar system.”

The gonzo financial website Zero Hedge ventured to say this amounts to a not-so-veiled threat to cut off China from SWIFT — the global payments network that greases the wheels of international commerce. Zero Hedge is prone to hyperbole, but in this case we daresay they’re not off the mark.

If your nation has no access to SWIFT, your economy is toast. While SWIFT is based in Brussels, it’s the United States who calls the shots.

In 2012, when Iran was at loggerheads with the United States and other Western powers over its nuclear program, Iran was cut off from SWIFT. Hyperinflation and bank runs followed in short order.

To keep body and soul together, Iran’s government struck a deal with Turkey. Not that they made a big deal about it, but we managed to connect the dots here in The 5: More than 90% of Iran’s natural gas exports already went to Turkey. Meanwhile, Turkey’s gold exports to Iran exploded over a 12-month span, from $13 million to $480 million.

When U.S.-Russian relations started going seriously south in 2014, several Russian banks were cut off from SWIFT. Russia too sought refuge in gold — the central bank drawing down its foreign exchange reserves to build up its gold reserves. The Russian gold stash has grown 44% in the last 3½ years.

Twice this month, we’ve taken note of China’s plans to launch an oil futures contract priced in yuan and convertible to gold. This arrangement will be of immense interest to the globe’s two biggest “outcast” energy producers shunned by the West — Russia and Iran.

It’s a sophisticated gold-based workaround that builds on the success Russia and Iran have already had after getting shut out of SWIFT. But it’s more than that.

“This marks the beginning of the end of the petrodollar system that Secretary of State Henry Kissinger worked out with Saudi Arabia in 1974, after Nixon abandoned gold,” says our macroeconomic maven Jim Rickards.

The system has worked like this: Saudi Arabia prices oil in U.S. dollars and uses its clout to get other OPEC nations to do the same. In return, the U.S. government protects the House of Saud and its allies against foreign invaders and domestic rebellions. Now all that’s at risk.

Nor is the oil-gold link the only weapon China has in its anti-dollar arsenal.

In May 2015, Jim Rickards ventured to the Pentagon to take part in a “financial war game” — the latest in a series going back to the first in early 2009, in which Jim also took part.

“Our scenario,” he recounted in these pages at the time, “was limited to a confrontation between China and the U.S. involving disputed jurisdiction in the South China Sea.” China claims large parts of those waters. But so do Vietnam, Malaysia, Taiwan, Brunei and the Philippines. Washington has treaty obligations to Taiwan and the Philippines.

The war games did not focus on ships and planes… but rather on the SWIFT payment system. “We asked what would happen if the roles were reversed? Instead of the U.S. banning its enemies from SWIFT, what if China tried to ‘de-SWIFT’ Taiwan or the Philippines? What if financial weapons developed by the U.S. were adopted by China and turned against the U.S. and its allies?”

Then again, the Chinese could attack the dollar with far more blunt force.

Our national debt, which just surpassed the $20 trillion mark? China owns 5.7% of all those Treasury bills, notes and bonds. “All they have to do is not show up for a Treasury auction and all hell would break loose!” says our friend Chuck Butler, longtime keeper of the Daily Pfennig e-letter.

Or how about a hack attack on one of the major U.S. stock exchanges? As Jim is fond of reminding us, Nasdaq never came clean about what shut down trading for three hours one day in 2013.

Back to that financial war game in 2015: Jim said he learned two lessons that day. And they’re even more relevant now.

“The first is that when nations engage in financial warfare, individual investors can be collateral damage. If China tries to attack the U.S. by closing the New York Stock Exchange, it will be tens of millions of Americans who will suffer an immediate loss of wealth as prices plunge and accounts are locked down or frozen.

“The second lesson is that the financial war will be fought in cyberspace using digital technology applied to payments systems such as SWIFT, Fedwire, MasterCard, Visa and Europe’s Target2 system.

“The answer to both threats — collateral damage and digital warfare — is to have some hard assets in physical form that cannot be attacked digitally. Such assets include physical gold and silver, land, buildings, fine art and rare stamps. These are the things that cannot be erased in a digital attack or frozen when payments systems are disrupted.”

To the markets: The major U.S. stock indexes are taking a breather after notching record highs yesterday. At last check the Dow and S&P 500 were microscopically in the red, the Nasdaq a bit more so.

Gold is in retreat again, thanks mostly to dollar strength. The bid is down to $1,322. Depressing as that is in the context of $1,350 last week, the Midas metal is still higher than it was when it went into a swoon right after Election Day.

Bitcoin is down to a one-month low of $3,862. Evidently JPMorgan Chase CEO Jamie Dimon’s remarks, noted here at virtual press time yesterday, were an excuse for some people to take profits. And why not? Two months ago, bitcoin was only half the price it is today.

The notable economic number of the day is wholesale prices — up 0.2% last month, less than expected for the third month in a row. If the Fed is looking for signs of resurgent inflation to justify “tightening” monetary policy, they’re not in this report.

There should be a giant asterisk next to the mainstream headlines about median household income reaching its highest levels this century.

The Census Bureau came out yesterday with its annual estimate of median household income — half of Americans are above that figure, half below. The official number for last year is $59,039 — finally exceeding the previous high mark of $58,665 in 1999. (That’s going by inflation-adjusted 2016 dollars.) 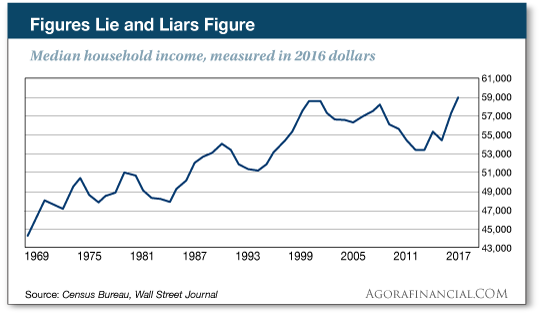 But wait! The Census Bureau changed its methodology in 2013. We’ll spare you the mind-numbing details, other than to say it’s an apples-to-oranges comparison. Researchers at the Economic Policy Institute say if the numbers were consistent, median household income is still 2.4% lower than it was in 1999. For that matter it’s 1.6% below the level in 2007, before the onset of the “Great Recession.”

The rest of the report is likewise loaded with caveats. The poverty rate is down to 12.7% — lower than 2008, but still higher than anytime between 1997–2007. And while more people have health insurance, the figures say nothing about the cost of that insurance or the quality of care it provides.

If only hurricanes Harvey and Irma had struck a year ago: Then the cost of rebuilding might not be nearly as steep.

As we mentioned in April, the Trump administration slapped a 20% duty on Canadian softwood lumber. Since then, there’s been an additional 6% “anti-dumping” duty.

Tariffs on Canadian lumber aren’t new. But this round is weighing more heavily on American consumers, according to Kevin Mason of ERA Forest Products Research: “Historically, the Canadians have had to absorb half if not the bulk of the duties,” he tells Reason. “This time the U.S. consumer has borne the entire brunt.”

When the first round of new tariffs hit in April, lumber prices were suddenly 25% higher than a year earlier. “We had no choice but to pass that along to our retail pricing for the home,” says Patrick Mayhan from Houston-area builder Westin Homes. “And that’s a significant amount, because lumber is a big part of the cost of building a home.”

Indeed, the National Association of Home Builders says the tariffs have added $1,700 to the cost of a typical new home.

Gee, and if someone’s rebuilding in a floodplain and they’re covered by that obnoxious boondoggle known as the National Flood Insurance Program? You’re footing some of the bill, dear taxpayer. Good times…

“Your reader yesterday isn’t the only one who appreciates Beijing’s cashless society,” begins today’s mailbag. “No doubt WeChat is awesome, and there is nothing like it in the United States.

“I just got back from living in Beijing myself and wrote this article listing the top apps available in the states to replicate that convenience. Nothing quite does the job, but one does come decently close.

“I don’t receive any remuneration for this, by the way — I’m just another WeChat enthusiast.”

Now for an opposing view: “I am reading The 5 just an hour after getting some service done by a heating and AC service company. And the comment from the reader about the convenience of China’s electronic pay system gave me a chuckle.

“When it came time for me to pay the service guy he said it was $85. I gave him one Benjamin, he gave me one Abraham and one Alexander. He was instantly credited, and I was instantly debited. Total transaction time roughly 10 seconds.

“Without a radiation-emitting smartphone (I don’t own one, and I like it that way) or a SIM card or a family member transferring money into my account and no detailed records. In my opinion China’s e-pay system is the joke.”

The 5: Yeah, we’re not getting in the middle of this one today.

We’re sure for the globe-trotting set, the convenience of WeChat et al. can’t be beat. Our cryptocurrency research team points out that in Southeast Asia, only 21% of adults have credit cards and 27% have bank accounts. But legions of them have smartphones. Little wonder that $50 billion in transactions run through WeChat every month.

But no, there’s no privacy with electronic payments in a centralized system. In 2014, the Federal Reserve surveyed seven developed countries and found 82% of transactions in Germany taking place in cash; the U.S. figure was 46%.

“The main reason people give for preferring cash is anonymity compared to card payments. People are just more cautious in Germany,” said Helmut Hammes to USA Today in 2015. And he ought to know: He was running the cash department for Germany’s central bank, the Bundesbank…

Don’t feel as if you’ve missed out: There’s no better time to speculate in the crypto markets. “Crypto-quakes,” as Lou Basenese calls them, are happening every few days. Look here for the next great opportunity.