The markets are as mellow as they could be on this Friday morning. In Jim Rickards’ estimation, they ought to be scared — uhhh — stool-less. In time, they will be.

Markets worldwide are yawning. “Another missile test? Booo-ring. Tell us something new.” As we write the Dow has tacked on 45 more points to yesterday’s record close. Volatility as measured by the VIX is the lowest it’s been all month. Gold is little changed from 24 hours ago at $1,322.

So why does it matter even though markets are shrugging it off? Well, it comes back to Treasury Secretary Steve Mnuchin’s threat to cut off China from the U.S. dollar payments system, which we explored in depth on Wednesday.

“The U.S. dollar represents 60% of global reserves, 80% of global payments and almost 100% of global oil sales. Cutting off any party from U.S. dollars is like cutting off the oxygen from a patient in intensive care. They won’t last long.

“That is exactly what Mnuchin threatened to do to China on Tuesday. He threatened to cut off China’s access to the U.S. dollar payments system if China does not rigorously enforce new U.N. sanctions on North Korea as a means to deter North Korea from pursuing its nuclear weapons and missile development.

“The problem is that North Korea will not be deterred.”

And whatever China does won’t be enough to satisfy Washington.

Recall that when President Trump met with China’s president Xi Jinping at Mar-a-Lago in April, Trump effectively gave Xi 100 days to convince North Korea to give up its weapons programs. Those hundred days came and went. Nothing happened.

Explains John Feffer of the think tank Foreign Policy in Focus: “Trump initially said that he would, as previous administrations said, outsource the problem to the Chinese, get China to solve this problem for the United States.

“And that of course fails on any number of counts,” Feffer explained last month in an interview with The Intercept. “No. 1, China does not do the bidding of the United States on foreign policy issues, and No. 2, China doesn’t have that kind of influence in Pyongyang. Pyongyang assiduously avoids any kind of dependency relationship with China and spurns all of China’s advice, for the most part.”

Even if the Chinese government did have influence over Kim Jong Un, it doesn’t have much incentive to use that influence.

“China will not enforce the sanctions beyond superficial compliance,” says Jim Rickards. “They certainly will not go to the lengths the U.S. expects. China fears a destabilized North Korea that could be reunified on South Korean and U.S. terms.”

For sure: Suddenly tens of thousands of U.S. troops would be stationed in a country on China’s borders. Beijing would view that as an existential threat.

The Chinese government has suggested North Korea freeze its missile and nuclear tests in exchange for the United States and South Korea abandoning their annual military exercises in the region — drills the North Korean regime has long viewed as an existential threat.

Evidently the “national security” bureaucracy in Washington considers that an unacceptable trade-off.

Meanwhile, Mnuchin has backed China into a corner with his threat.

“Chinese behavior is governed by ‘face,’” Jim says. “By the U.S. Treasury making such a public declaration, China cannot back down without losing face. In an age of rising Chinese power, China will not lose face.”

Now… Recall what we said on Wednesday about how China owns 5.7% of Uncle Sam’s $20 trillion national debt. Let’s tease out the consequences for a moment…

“China has over $1 trillion of U.S. government securities in its reserve position. Those securities are paid at maturity and rolled over through the U.S. dollar payments system run by the U.S. Treasury with the Federal Reserve as fiscal agent. If China is denied access, then China’s Treasury securities portfolio is effectively frozen.

“China is relying on those liquid dollar reserves both to bail out its insolvent banking system and to defend its currency. The implications of freezing China out of dollar payments are almost incomprehensible.

“So the path is set. North Korea is going for the weapons. The U.S. will not allow North Korea to get them. The U.S. is relying on Chinese help, which will not be forthcoming. The end result is a shooting war with North Korea and a financial war with China.

“This war is coming in six–eight months,” says Jim. “The time to make your financial moves is now — before it’s too late.”

Jim tells us this is the first time he’s ever put a time frame on a specific “snowflake” that could trigger a financial avalanche.

As you might know, Jim says the financial system is analogous to a giant and precarious snow shelf. Eventually a single snowflake triggers a massive slide. For years, Jim’s been cautious about not identifying which “snowflake” would set off a catastrophe, or when. No longer. You have your event, and you have your time frame.

With five days to go before the next “policy setting” meeting of the Federal Reserve, any chance of another interest-rate increase just vaporized with this morning’s economic numbers…

Yeah, we know we said yesterday that the inflation rate’s been creeping up the last three months. But no way does the Fed raise rates now. Indeed, hurricanes Harvey and Irma might prompt the Fed to postpone plans to start shrinking its balance sheet.

Bitcoin is recovering from another China scare — up 13% as we write from its lowest point these last 24 hours and once again approaching $3,700. 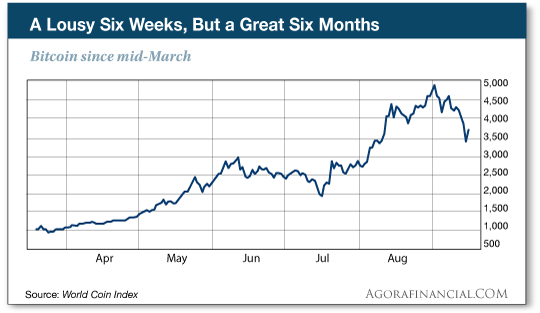 The sell-off yesterday came with rumors that China’s planned crypto crackdown will proceed quickly, with all exchanges shut down by the end of this month. One of the biggest exchanges announced it would halt trading on that timetable.

As we pointed out earlier this week, private trade of cryptos will continue unabated. In addition, many Chinese will still be able to transact on exchanges based in Hong Kong.

“Ignore all the hate and obstruction,” Lou Basenese says of all the China crypto news — and the crypto-bashing from the likes of JPMorgan Chase CEO Jamie Dimon.

“Countless hedge funds focusing exclusively on cryptocurrencies are popping up all over Wall Street,” Lou says. “It’s only a matter of time before the trend comes to JP Morgan. When it does, I’m betting Dimon will miraculously change his tune. After all, I’ve never met a banker that doesn’t love more fees.

“Whenever disruption occurs, the incumbents that stand to lose the most always violently protest and badmouth the disruptor.”

Lou recalls the launch of the iPhone a decade ago — met with the following response from Microsoft’s CEO at the time, Steve Ballmer: “There’s no chance that the iPhone is going to get any significant market share. No chance.”

“It’s no different with cryptocurrencies,” Lou says. “The parties that stand to lose the most are spewing the most hate. This is all rather predictable. But before long, they’ll come around. That is, once they understand their true disruptive power.”

[Ed. note: Yesterday, Lou urged his True Alpha readers to take profits of more than 200% on two cryptocurrencies he recommended in late June.

If you still haven’t dipped your toe into the crypto market, Lou says it’s still not too late to put the “Secret $20 Bitcoin Blueprint” to work. Here’s where to get started.]

So much for the notion that legal marijuana would result in legions of stoned teenagers.

“Everybody on both sides of the pot debate agrees on one thing,” says our penny-pot stock maven Ray Blanco: “Marijuana shouldn’t be in the hands of kids. Just like alcohol and tobacco. But the latest data show that as marijuana legalization sweeps the country, teen marijuana use is plummeting.”

Every year the feds conduct something called the National Survey on Drug Use and Health. The latest version, out a few days ago, reveals the number of kids ages 12–17 who say they’ve used pot in the last month has hit a two-decade low… 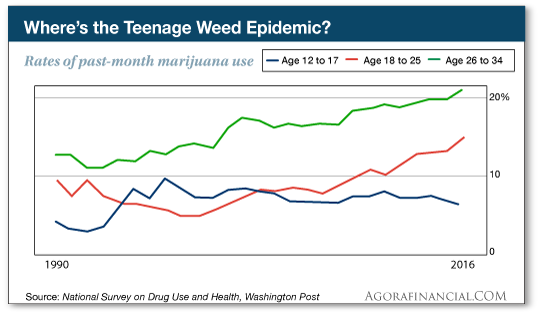 “Zoom in a bit,” says Ray, “and those data are mirrored in locales where recreational weed is legal. In Colorado, teen marijuana use has fallen steadily since the state legalized weed in 2009.

“It’s not terribly hard to figure out why this might be the case. Drug dealers don’t care how old their customers are. Licensed, regulated marijuana dispensaries do. And it’s a whole lot easier to crack down on illegal pot sales in states where there are legal dispensaries.”

Marijuana is becoming much like alcohol in the 1930s after Prohibition was lifted. It’s taxed. It’s regulated. And it’s lucrative if you know how to trade in and out of penny pot stocks. (Ray does — as his happy readers are eager to tell him.)

“I think China’s new yuan-based oil purchases ‘backed by gold’ are a joke,” a reader writes.

“For a long time China has said that once gold arrives in China, it never leaves. In that case, any country selling oil to China for yuan will only get an IOU for gold that they will never see in physical form. Eventually, they will realize this fact.”

The 5: True, China won’t be parting with any gold in payment for Russian or Iranian oil.

But it doesn’t have to in order to create trust with its trading partners. Aside from the appeal of bypassing the dollar, “China also offers gold hedging facilities on the Shanghai Futures Exchange to cover any foreign exchange risk on the conversion of yuan to gold,” says Jim Rickards.

Again, you’re right insofar as China still wants to build up its gold hoard in preparation for the global monetary endgame. More about that on Monday. (How’s that for a cliffhanger?)

P.S. Speaking of Monday, something happening around 10:00 a.m. EDT that day could have a sudden and dramatic impact on your life.

If you’re collecting Social Security checks, or plan to start soon… you really need to watch this short video clip.