Did you follow James Altucher’s guidance here on Tuesday? You know, where he said, “Long-term investors can take advantage of potential price volatility to invest in bitcoin”? 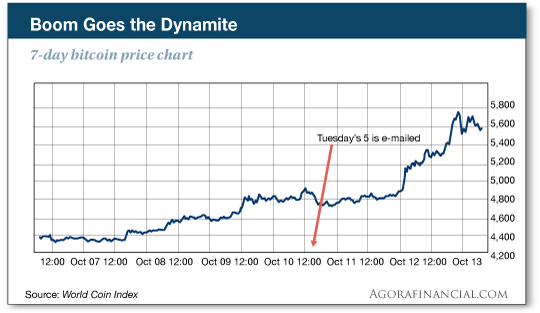 It might have helped — it certainly didn’t hurt — that the giant cryptocurrency exchange Coinbase announced it’s eliminating one of the biggest pains in the tuchus when you buy crypto.

Until now, a bitcoin purchase via a U.S. bank account took as long as five days to clear. But before year-end, you’ll be able to make instant purchases of up to $25,000 via Coinbase. Not only bitcoin, but also ethereum and litecoin too.

That’s a huge deal, considering the price volatility James mentioned. If you did follow James’ guidance on Tuesday but bought through a bank, it’s likely your order hasn’t been filled yet and you missed out on that price appreciation. If you’d bought via a credit card, on the other hand, your order would have been filled right away… but Coinbase charges higher fees for a credit card transaction.

With its big price move in less than 48 hours, bitcoin’s market cap is now greater than that of the “vampire squid.”

For real. CNBC reports this morning that if bitcoin were a company trading on the New York Stock Exchange, it would be the 58th largest by market cap. At $96.6 billion, the total value of all the bitcoin out there is higher than Goldman Sachs’ value of $92.9 billion.

If you’re not familiar with Goldman’s characterization as a predatory deep-sea creature, it goes back 8½ years now. That’s when Matt Taibbi published a delicious exposé of the company in Rolling Stone, complete with the unforgettable line, “The world’s most powerful investment bank is a great vampire squid wrapped around the face of humanity, relentlessly jamming its blood funnel into anything that smells like money.”

Even before these latest developments, “News broke earlier this month that Goldman Sachs is investigating opportunities to capitalize on digital currencies,” says the aforementioned James Altucher.

“The report came just a month after JP Morgan CEO Jamie Dimon told conference attendees in New York that he believes bitcoin is a ‘fraud… worse than tulip bulbs.’”

To be sure, big banks still view cryptocurrencies as risky business. “However,” says James, “validation by well-respected banks like Goldman Sachs would represent an inflection point in the acceptance of digital currencies.”

But — and this is crucial — cryptos don’t need validation from the banks to thrive. “Because digital currencies are decentralized,” says James, “digital currencies will succeed regardless of whether they receive interest in and participation by banks.”

Sorry, Lloyd, your opinion doesn’t matter as much as you think it does.

[Ed. note: James is only three days away from taking his readers to the next level of cryptocurrency wealth.

And what a level it is: “I’m talking about a once-in-a-lifetime opportunity where you can make 100,000% returns on your money.”

That’s right — every dollar invested turning into $1,000. James reveals all during an exclusive live event this coming Monday at 1:00 p.m. EDT. You’ll want to clear your schedule for this one. It won’t cost you a thing to watch. Just drop us your email at this link and we’ll be sure to save you a spot.]

The major U.S. stock indexes are inching higher into record territory amid a flurry of earnings reports and economic numbers.

Bank of America and Wells Fargo delivered earnings “beats,” although Wells dipped into its bag of accounting tricks to achieve that result — it’s facing billions in legal costs from the bogus-account scandal — and WFC shares are down more than 3.5% as a result.

Retail sales jumped 1.6% in September, driven in part by hurricane effects; gas prices jumped and many Floridians and Texans have had to replace their flooded-out cars. But even when you back out gasoline and auto sales, the number was up a respectable half-percent.

Meanwhile, there are early signs that inflation is starting to pick up again.

The Labor Department is out with the September consumer price index, which registers a 2.2% annual increase. The rate has been rising three straight months now.

But that won’t alter the Federal Reserve’s calculus when it comes to raising interest rates in December; the Fed’s preferred inflation measure is still sliding downward and Jim Rickards says the Fed will stand pat when it’s decision time in two more months.

In fact, Jim just uncovered further evidence that the Fed is in pause mode.

As we mentioned yesterday, the “minutes” from the Fed’s September meeting sent mixed messages. But Jim found one word in the statement that tips the Fed’s hand. “Our old friend ‘patience’ is back,” he tells us.

Ah, yes. The word “patient” emerged as a cornerstone of Fed policy at a crucial juncture in late 2014. The Fed had just wound down its bond-buying program that went by the awful name of “quantitative easing.” The question then became how soon the Fed would begin to raise the fed funds rate from near-zero levels, lifting a monetary state of emergency that had been in effect since the Panic of 2008.

The Fed opted to punt. From the December 2014 policy statement of the Fed’s Open Market Committee: “The Committee judges that it can be patient in beginning to normalize the stance of monetary policy.”

The Fed yanked the word “patient” from its statements only three months later. But it exercised that patience for an entire year, finally raising the fed funds rate in December 2015.

Which brings us to the minutes released this week: “… many participants expressed concern that the low inflation readings this year might reflect not only transitory factors, but also the influence of developments that could prove more persistent, and it was noted that some patience in removing policy accommodation while assessing trends in inflation was warranted.”

“With patience back in the Fed’s vocabulary,” Jim says, “we have a clear signal that the Fed intends to delay its next rate hike.”

Nor is “patience” the only evidence Jim is marshaling to make his case.

“Global elites know how to threaten Janet Yellen when they don’t like the path she’s on,” says Jim.

“On Wednesday another super-elite, Larry Fink of BlackRock, one of the world’s largest asset managers, said that the only thing that worried him was a Fed ‘mistake.’ Almost no one believes that pausing in December is the kind of mistake Fink is concerned about. Clearly, his view was that the ‘mistake’ would be a rate hike. Fink was warning Yellen not to do it.

“There’s nothing coincidental about Wolf and Fink publicly reading from the same page. It’s a coordinated warning. That’s how the elites roll.”

Traders in fed funds futures are still convinced there’s an 82% probability of a rate increase. Eventually, the market will come around to Jim’s view.

How to play it? “Buy euros, gold and Treasury notes and just sit back and enjoy the ride.”

“Walmart is just about the biggest, most boring stock on the market. It rarely surprises people,” says our Jonas Elmerraji, “but that’s exactly what it did earlier this week.”

Walmart convened its annual investor meeting on Tuesday. It had good things to announce — including a forecast of 40% growth in its online business.

A Bloomberg story this week reminds us WMT has come a long way from its presentation two years ago — when its online efforts were flailing and the company said it would spend $2 billion to try to fix it.

On that day, Walmart stock tumbled 10% — its biggest one-day slide since 1988, back when harem pants and teased bangs were all the rage. (And Phil Collins topped the charts with “A Groovy Kind of Love.” Bad times.)

But to nearly everyone’s shock, that $2 billion of effort is starting to pay off. No more me-too initiatives that Amazon had already cornered. WMT is instead leveraging the power of all those brick-and-mortar locations — like discounts for certain items you buy online and pick up at the store. No annual membership fee for the privilege, either.

With that outlook of 40% growth in its online business, “shares exploded higher,” says Jonas, “moving within spitting distance of all-time highs.”

Readers of Kinetic Profits who acted on Jonas’ WMT option recommendation at the end of August were up 95% by the time he recommended selling yesterday.

And the remarkable thing is that Jonas had no idea in August that Walmart would make a blockbuster announcement this week. He just used his proprietary computer program to identify the “K-Signs” that occur each year when WMT stock makes its biggest moves and found a suitable options play to maximize those gains.

Jonas issued three new recommendations this week and it’s not too late to act. Learn more about how K-Signs work right here.

To the mailbag, where a reader wishes to riff on our corporate tax-cut remarks yesterday: “I hope at some point The 5 will stand up for Middle America with a strong argument that the Trump proposal will help that group.”

“Corporate tax breaks never flow to 95% of the American population. Having been in ‘Corporate America,’ I know the CEOs are not going to pass such windfalls to nonexecutive employees or customers. (General Electric will cut the price of a Pratt & Whitney jet engine so American Airlines can lower its seat prices? Give me a break!)

“They are going to keep most of it in the corporate coffers for their bonuses and there might be some increase in dividends, which surprisingly (really?) will go mostly to the top 5%!

“If the Trump tax plan would demand that the funds held overseas are directed into a capital program (new plants, equipment built in America), then Middle America might benefit. Additionally, if the tax plan directs money into impoverished or blighted areas, more tax credits are granted to the companies that make that type of investment.

“As to what we know, this tax plan is a fraud and would be a nightmare for Middle America.”

The 5: That’s the problem; there’s not much that we know with the nine-page document the Republicans released earlier this month. The details are subject to the usual congressional horse-trading, and then the bill has to be passed so we know what’s in it. Because that’s how D.C. works now…

P.S. We’ll undoubtedly have more to say on the topic of corporate tax reform in the next few weeks… but in the meantime you should know the folks behind one of our premium advisories believe what’s happening in Washington will unleash an extraordinary opportunity to turn a $2 grubstake into $6,000 — in a matter of weeks.

You can review the evidence for yourself at this link. No long video to watch.