That Wasn’t So Bad, Was It? 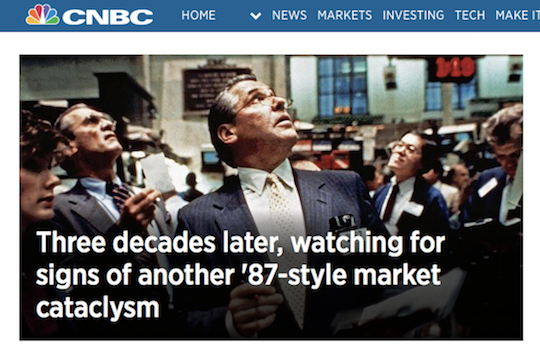 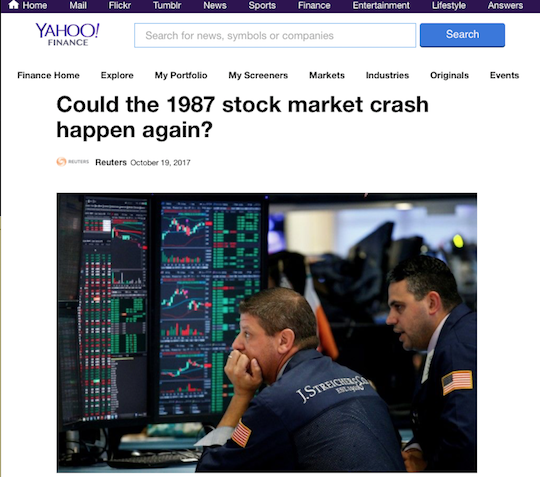 Yes, the Dow industrials suffered their biggest one-day percentage loss on “Black Monday,” 30 years ago today — nearly 23%. Today that would be like a 5,200-point loss in one trading session.

But really, how are headlines like that going to help you improve your life or your portfolio or your retirement?

Just for fun, let’s entertain a worst-case scenario: What if the Dow really did experience a comparable one-day crash now?

Well, assume for the sake of argument that on the Friday before Black Monday in 1987, you bought all 30 stocks in the Dow industrials. It might have seemed like a sensible thing to do — the market was already down 17.5% from its peak two months earlier. How much further could it sink?

But sink it did on Black Monday, and you were down nearly 23% by day’s end — assuming you hadn’t panicked and sold during the day.

Now… What if you knew you’d recoup all those losses in the next 15 months? 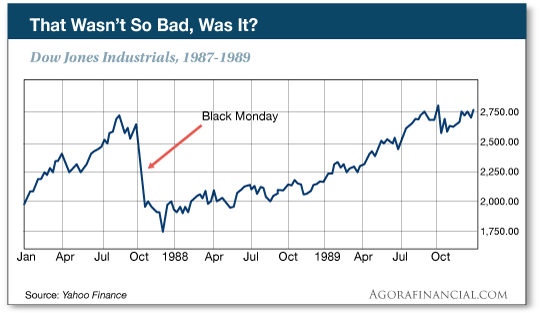 And in the context of an epic bull market that lasted from the summer of 1982 until the dot-com blowoff top in early 2000… Black Monday was a hiccup: 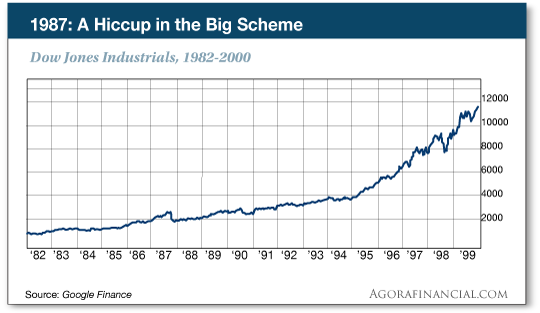 Don’t get us wrong — we’re not saying that if the Dow experienced another 23% one-day crash that history would repeat. This time you’d have no idea how soon you’d recoup those losses. And even if history repeated itself exactly, that would be cold comfort if you were only a few months from retirement.

But these are things the mainstream won’t tell you in its rush to crank out anniversary stories — one of the laziest forms of journalism ever.

And anyway… why all the hoopla today? We don’t recall anything like this during the 25th anniversary in 2012.

Maybe it’s starting to dawn on people that the market has run up too far too fast this year. At this time in 2012, the Dow was up only 8% on the year — and it experienced a sharp pullback of nearly 10% in May.

Which brings us to the following headline from Politico that came out a couple of hours before the Dow notched that record close: “Treasury Secretary: Pass a Tax Bill or Markets Will Tank.” 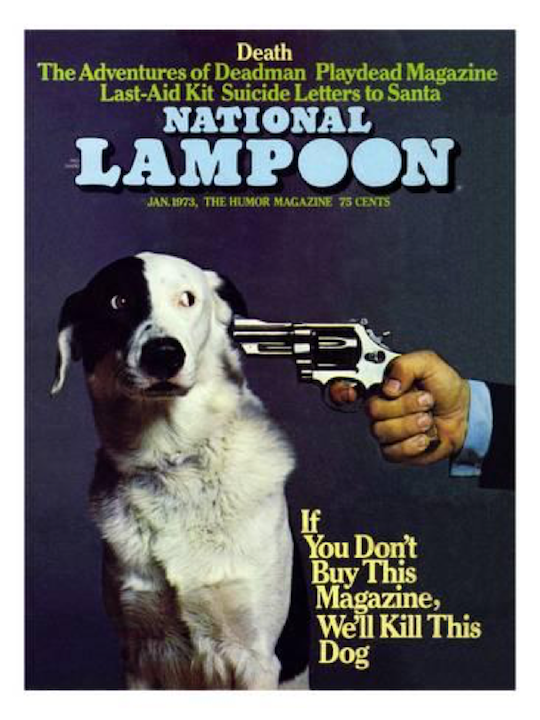 How did they get that dog to look so worried?

Anyway, here’s what Treasury Secretary Steve Mnuchin said: “There is no question that the rally in the stock market has baked into it reasonably high expectations of us getting tax cuts and tax reform done. To the extent we get the tax deal done, the stock market will go up higher.”

Then he said this: “But there’s no question in my mind that if we don’t get it done, you’re going to see a reversal of a significant amount of these gains.”

Here’s the thing: Whenever tax reform gets done, the biggest benefits will accrue to a special group of 28 million Americans. And even if you’re not one of them… you can hitch a ride along with them and potentially turn every dollar invested into $3,000. See for yourself — no long video to watch.

Assuming the morning’s market action continues a few more hours, there will be no record closes today.

At last check, the Dow and the S&P 500 are both down less than a quarter-percent. The Nasdaq is down a little over half a percent. Gold is up a bit, to $1,288, and that’s not entirely a function of dollar weakness. The dollar index is down modestly at 93.1.

The only mild surprise amid a flurry of earnings numbers is Verizon, which only met expectations instead of beating them.

There’s also a flurry of economic numbers. The only one that stands out is the Conference Board’s leading economic indicators — which took a 0.2% spill in September. Most of that was a function of a jump in unemployment claims after the hurricanes in Texas and Florida. That trend is already reversing, though. Steady as she goes…

“Cash just made a big comeback in one place, and the reasons are revealing and a warning to us all,” says Jim Rickards.

It’s been one month since Hurricane Maria ravaged Puerto Rico. With houses leveled and infrastructure wrecked, Bloomberg reports, “Nine of 10 Puerto Ricans are still without power, half the island has no drinking water, schools are closed, there’s a government-mandated curfew — and businesses everywhere are trying to cope.”

The most prolific bank in Puerto Rico, Banco Popular, is operating with only half of its branches open. “Less than a week into the massive blackout that followed Hurricane Maria and essentially turned Puerto Rico into a cash-only economy,” Bloomberg says, “one top local banker became so concerned about the supply of bills that he called the Federal Reserve” (emphasis ours). In response, the Fed quietly dispatched a “jet loaded with an undisclosed amount of cash… to the stricken island.”

“The lesson is that you should have a stash of cash next to your batteries, flashlights and water in case of emergency. The digital payments system is more vulnerable than most realize.”

Jim hits the nail on the head: “Cash is obsolete… until it’s not!”

“The market needs to be properly prepared for this,” says an anonymous official with the International Monetary Fund.

The Financial Times had a curious story this week about the IMF preparing to rescue Venezuela.

There’s no doubt Venezuela is a basket case. The official inflation rate is 741%. Unofficially, the Troubled Currencies Project at the Cato Institute says it’s more likely 2,520%. Nearly two decades of “Chavismo” — aka socialist management — has brought the nation to this pitiful state.

But the late president Hugo Chavez cut off relations with the IMF a decade ago, saying the IMF is “dominated by U.S. imperialism.” (Which it is. A broken clock is right twice a day…) The IMF doesn’t swoop into a country unless the regime agrees to let the IMF in.

“In recent months,” says the FT, “IMF staff have quietly crunched numbers for a potential bailout that, were it to happen, could be bigger financially and more politically complex than its much-criticised involvement in Greece.”

The salmon-colored rag didn’t say so, but in recent months the Trump administration has also talked up regime change there. “We have many options for Venezuela, including a possible military option if necessary,” said the president in August.

We’ll just leave it at that for now…

“Rainy days and (probably) Mondays always get me down,” say the wonks at the U.S. patent office.

Yale student Balázs Kovács has uncovered a weird phenomenon: Weather is a contributing factor in the patent review process. His research paper — Too Hot to Reject: The Effect of Weather Variations on the Patent Examination Process at the United States Patent and Trademark Office, — (snappy title) rolls out the evidence.

“This paper documents a small but systematic bias in the patent evaluation system at the United States Patent and Trademark Office: External weather variations affect the allowance or rejection of patent applications,” Kovács contends.

So the forecast for patent-pending inventions? On warm but cloudy days: stamp of approval. Cold and clear… no patent for you!

While Kovács notes the weather bias is “relatively modest,” his study might have inventors obsessing over the D.C. weather forecast…

“Yesterday,” a reader writes, “you said, ‘the feds know exactly how far they can push things before the governed withdraw their consent.’

“This immediately reminded me of a Frederick Douglass quote: ‘The limits of tyrants are prescribed by the endurance of those whom they oppress.’

“He also said, ‘Find out just what any people will quietly submit to and you have found out the exact measure of injustice and wrong which will be imposed upon them, and these will continue till they are resisted with either words or blows, or with both.’

“Sooner or later,” the reader circles back to our topic yesterday, “the TSA will go too far.”

The 5: Too far by whose standards? For all the outrages the TSA has committed in its 16-year existence, there’s been no uprising yet…

“I am shocked to see North Dakota is in the RED for recession readiness,” a reader writes after another topic yesterday, “with all the success they’ve enjoyed in the oil business boom.

“Or did the decrease in crude over the last two–three years really put a hit on them? Thanks, love The 5.”

The 5: It’s not the collapse in oil prices since mid-2014 as much as the fact that North Dakota’s oil riches are so new.

In contrast, places like Alaska, Wyoming and Texas have fairly robust rainy-day funds because they have painful memories of the mid-1980s collapse in oil prices. “They’ve seen this movie before,” Moody’s Analytics director Dan White tells The Wall Street Journal. “They know how it ends, so they are already putting away money to protect themselves from the next recession.”

“Thanks,” writes our final correspondent.

“Always appreciate your thoughtful perspective on a wide range of (ultimately money) matters much more than the almost constant stream of ‘next big thing’ promos.”

The 5: Ah, but it’s those promos that pay the bills and allow us to bring you the thoughtful perspective. We’re glad you find it an acceptable trade-off!

P.S. Did you play it? This morning, Jonas Elmerraji urged Kinetic Profits readers to collect nearly 100% gains on Adobe call options. Not bad for less than three months.

You too can harness the power of “K-Signs” for gains that good or even better. See how they work when you follow this link.