A Tax Break That Works

Amid a flurry of Monday-morning tweets in which the president carried on his feuds with NFL players and soldiers’ families, he made some actual news…

Of course, the casual news consumer is liable to ask, “Since when was anyone proposing to mess with my 401(k)?”

But if you’ve been keeping up with The 5, you’ve known the score for the last six months. And we daresay the story might be over for now… but not for all time. What follows is a word to the wise…

Late Friday afternoon, someone let it slip to The New York Times and The Wall Street Journal that the GOP tax plan being drawn up in Congress would slash away at the tax benefits of 401(k)s.

And the details were more specific than anything we’d heard to date: The $18,000 annual contribution limit would be chopped down to $2,400. Any amount beyond that would be “Rothified.” That is, it would be treated like a Roth IRA — you’d pay taxes on it now, with the promise that the money plus any investment gains could be withdrawn tax-free in retirement.

The rationale was nothing other than a blatant short-term revenue grab — as the Times put it, “a way to help offset the revenue loss from a reduction in business tax rates that Republicans have put at the center of their plan. Reducing contribution limits would be, in effect, an accounting maneuver that would create space for tax cuts by collecting tax revenue now instead of in the future.”

The Journal said were it not for tax-deferred 401(k) contributions, federal revenue this fiscal year would be $115.3 billion higher. (More about the budget deficit shortly…)

The president’s tweet notwithstanding, we daresay it’s not time to let your guard down.

Maybe the idea’s off the table for now. But we’ve been chronicling proposals for “401(k) confiscation” as long ago as 2008. Future presidents and congresses won’t be bound by the current president’s tweet today. Remember under Reagan when the top tax rate was cut from 50% to 28% in the mid-1980s? That lasted all of three years — Poppy Bush jacked it up to 31% and Clinton pushed it to 39.6%.

Meanwhile, if changes to 401(k)s are off limits, what will Congress do to ensure the tax package is “revenue neutral”? As it is, both Congress and the White House appear determined to eliminate the deduction for state and local income taxes and property taxes. What else might they do to “offset the revenue loss from a reduction in business tax rates that Republicans have put at the center of their plan”?

The only thing that seems certain right now is a cut in the corporate tax rate. That’s the priority. Is your portfolio positioned accordingly? Learn how to take maximum advantage right here.

As long as we have retirement on the brain, we see a headline this morning that affirms our long-standing outlook about “the awful way Social Security might be saved.”

That was the title of an article your editor posted at The Daily Reckoning 2½ years ago. Already we were noticing a twin phenomenon: Educated higher-earning Americans were working well past retirement age and continuing to contribute to the Social Security system… while poorer Americans who hadn’t graduated from high school were dying in growing numbers before they could ever collect a dime in benefits.

Along comes Bloomberg with a story with the headline “Americans Are Retiring Later, Dying Sooner and Sicker In-Between.” 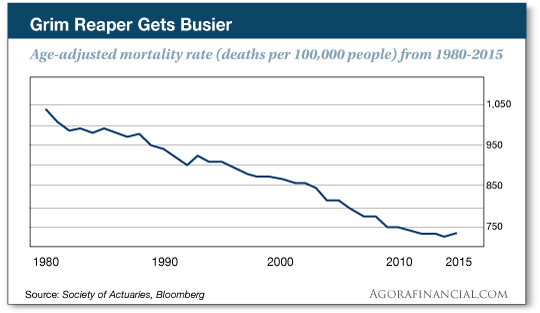 Meanwhile, “almost one in three Americans age 65–69 is still working, along with almost one in five in their early 70s.”

Oh, the “sicker in-between” part: Researchers at the University of Michigan find that “Americans in their late 50s already have more serious health problems than people at the same ages did 10–5 years ago.”

So… Social Security’s finances are looking a little better… but the government’s medical costs will only spiral higher.

Which lines up with another one of our forecasts — 20 years from now, you won’t be able to count on the health care system to treat chronic disease as aggressively as it does now.

The major U.S. stock indexes begin a new week hugging all-time highs. The Dow is up slightly, the S&P 500 and Nasdaq down slightly.

More noteworthy, today at least, is Japan’s Nikkei average. It’s been rising steadily for six weeks and today it jumped 1.1%, to its highest level since 1996 — thanks to a sweeping election victory by the party of Prime Minister Shinzō Abe.

Abe’s win signals more easy-money policy from Japan, which is weakening the yen and strengthening the dollar today. That dollar strength has knocked another five bucks off the gold price; the bid is now $1,274.

The only economic number of note today is the Chicago Fed National Activity Index, which has been a reliable predictor of recessions for nearly 50 years. And while the number is on the weak side this morning, it’s nowhere near recession territory.

Behold the demon deficit: Uncle Sam ended fiscal 2017 another $666 billion in the red.

That’s according to the U.S. Treasury’s final numbers for the fiscal year, out last Friday. Total federal spending reached nearly $4 trillion, but tax receipts totaled only $3.3 trillion. Tax receipts rang in higher than the year before but lower than the record 2015.

The $666 billion deficit this year compares with $586 billion last year. Hardly the trillion-dollar deficits of the early Obama years, but the number has been trending in the wrong direction for two years now… 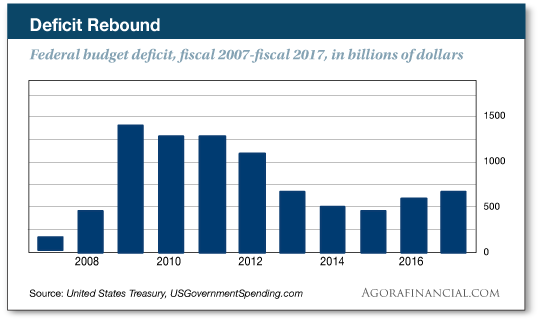 And that’s before interest rates start moving up and Uncle Sam has to start shelling out a lot more for debt service. Then again, maybe the powers that be will keep interest rates perpetually low for that very reason — which doesn’t bode well for fixed-income investments.

Incredibly, the “official” $666 billion deficit nearly squares up with the “real” number. The national debt grew $671 billion during fiscal 2017. Many years, the increase in the national debt — the only number that really matters — is far higher than the official deficit figure. (Indeed, the “balanced budgets” of the Clinton-Gingrich era were an accounting fiction; the national debt kept growing every year.)

“This could have turned into a worst-case scenario,” says an understandably anonymous Amazon customer from Orlando.

The woman and her fiancé had ordered some 27-gallon storage bins. Instead they got a 65-pound shipment of marijuana. They called police, who are now investigating. Meanwhile the couple says they’ve gotten little satisfaction from Amazon — a $150 gift card, but no apology or explanation.

“We were still pretty fearful our home would be broken into, and we didn’t sleep there for a few days,” the woman tells the local ABC affiliate.

For sure. It’s not uncommon in the illegal drug trade for criminals to mail drugs to innocent people, with plans for someone to snag the package from the doorstep before the innocent party claims them.

The couple is luckier than they realize. We recall the case of Cheye Calvo, the mayor of Berwyn Heights, Maryland. Sheriff’s deputies raided his home in 2008 — holding him and his mother-in-law at gunpoint, shooting and killing their two dogs.

It turns out police had intercepted a 32-pound package of pot addressed to Calvo. The SWAT team left it on his doorstep, staked the place out and then barged in when Calvo pulled the package inside.

Of course upon further investigation it turned out Calvo was no drug kingpin, and the cops had botched the investigation from start to finish; Calvo settled out of court in 2011 for an undisclosed amount of money.

We got a little activity in the virtual mailbag after our item Friday about how social-justice warriors object to the term “taxpayer money”… but it wasn’t what we expected.

No, it seems people want to speak up about the incident that brought on the controversy in the first place, about which we couldn’t care less. But we’ll give them their say…

“A little context please,” says one. “Vice President (and former Indiana Gov.) Pence was invited months ago to attend the game in Indianapolis when they retired Peyton Manning’s number. The overhyped war over kneeling wasn’t a big issue until only a couple of weeks earlier, following Trump’s remarks.

“Problem is you can’t do anything now without some criticism. ‘Taxpayer money’ is only an issue when the other guy is ‘wasting’ it.

Adds another: “So what are these expenses? Security, of course. Do the media idiots think the Secret Service are sitting at the unemployment office waiting for some elected official to plan a trip? They are on government salary full time, so if they are sitting in Washington or on a plane somewhere with the president or vice president, they are still getting paid their salary.”

The 5: The federal government in general, and the executive branch in particular, has gotten way too big and powerful to justify the personnel and expense entailed in “protecting” it.

One summer day in 2011, The 5 took note of a Barack Obama bus tour around the Midwest, and its rather imperial nature.

It’s worth watching the video of the whole thing as it passed through Zumbrota, Minnesota — population 3,252. That armored bus? It cost $1.1 million.

At the time also we mentioned how George W. Bush went to Argentina for a trade summit in 2005. His retinue numbered close to 2,000 people (excluding reporters), plus two dozen vehicles for the motorcade… and bottled water to supply him and his inner circle. Quipped an Argentine at the time, “Even Caligula drank the local water in Gaul!”

We’re a long way from the day when the British ambassador to the United States knocked on the door of the White House and President Thomas Jefferson answered it himself — in house slippers.

P.S. Just in case you missed it… we sent many of you an urgent customer-service alert on Friday and again today.

Our customer care director explains all during a three-minute video at this link. Please note that today is your last chance to make the change to your account that he describes.