OK, maybe this whole cryptocurrency thing is starting to get a little ahead of itself.

Bloomberg tells the story of a small-cap British internet and information company that’s been around for 20 years… whose stock suddenly quintupled in value on Friday.

The catalyst? The company changed its name from “On-line Plc” to “On-line Blockchain Plc.”

Nor is this a first: Earlier this month, Bloomberg tells us, an outfit in Colorado called “Bioptix” changed its name to “Riot Blockchain”… and nearly doubled in value over the span of a few days.

Even cryptocurrency websites have to acknowledge the crazy. “At the peak of the tech bubble,” says the website Coin Telegraph, “adding an ‘e-‘ prefix or ‘.com’ suffix caused the valuations of companies to jump multifold. During this bitcoin bull run, adding ‘Blockchain’ seems to have the same effect.”

Heh… Here at The 5, a more recent analogy comes to mind. In October 2013, Twitter announced plans to go public the following month under the ticker symbol TWTR… and “investors” instantly bid up a bankrupt electronics retailer called Tweeter with the ticker symbol TWTRQ. (The “Q” is how you know it’s bankrupt.)

Meanwhile, bitcoin crossed the $6,000 threshold on Sunday. (Unlike other asset classes, cryptos trade 24/7.) 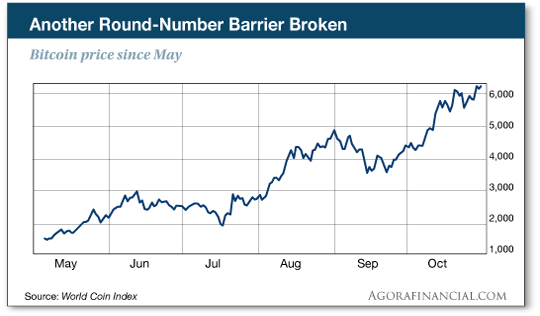 No obvious reason for this latest move, although rumors abound that the Chinese government is about to ease up on its recent crypto crackdown.

“Yes, cryptocurrencies are in a major bubble,” affirms James Altucher. “But don’t let that word scare you away.

“Crypto opportunities are never going away, and generational wealth will be made.

“Right now we’re living in early years of ‘A.C.’ It’s time to get ready… the world is about to change.”

James sees crypto as the next stage in the evolution of currency. “Easily transportable, zero transaction fees, no human intervention between payer and payee, high anonymity and strong functionality.

“Money evolves like anything else and the natural evolution of money is always as a store of value that is easier to move, more secure and more private.”

This just in as we’re assembling today’s episode of The 5: The world’s biggest operator of financial exchanges wants to introduce bitcoin futures. Bitcoin is now over $6,400.

CME Group already has a hand in futures on the S&P 500, oil and gold. Why not crypto? The company “wants to introduce the contracts by the end of the year,” Bloomberg reports — adding that this development “could help professional traders and investors finally get serious about the cryptocurrency.”

OK, before we were interrupted, James was telling us how crypto is the natural evolution of money.

But there’s a downside.

“With bitcoin, for example,” James explains, “a list of transactions is sent out to the network in the form of a ‘block.’ Miners, who are slowly paid in more bitcoin up to a maximum of 21 million, validate a transaction.”

“The good news,” James goes on, “is these are problems that can be eliminated.

“But until then, many cryptocurrencies are a big risk and can lead to a lot of overvalued coins. That’s setting the stage for a perfect bubble situation.”

But it also sets the stage for the ideal opportunity: “If you can identify the cryptocurrencies that are legitimate (have strong intrinsic value), then you can make a lot of money playing off the volatile situation in crypto.”

With that in mind, James has just announced a new session of his Cryptocurrency Masterclass. If you missed out the first time, here’s your perfect chance. “I’m here to sift through the duds and bad info,” he says, “to give you real moneymaking opportunities before, while and after the bubble bursts.”

We wrap up our crypto musings today where we began them, harking back nearly 20 years: “Many were burned with similar bubbles like the dot-com boom type in the ’90s,” James says. “My goal is to make sure you don’t get burned again.” Follow this link for James’ full invitation.

To the more conventional markets… where traders are again keeping an eye on events in Washington.

For the moment, traders have shrugged off any worries noted here yesterday about corporate tax reform. The major U.S. indexes are all in the green, although none of them have fully recovered yesterday’s losses.

Meanwhile, it appears the worst-kept secret in Washington is that the president will nominate Jerome Powell as the new chairman of the Federal Reserve on Thursday.

Powell has been a Fed governor since 2005. He is not the “disruptive” pick that our Jim Rickards was anticipating. Indeed, the hallmark of a Powell term is likely to be continuity. “He’s Yellen… without the Yellen,” Jim tweets.

In other words, we’re still looking at epic-low interest rates — even if they’re not quite as low as a year or two ago.

Savers and money managers are pressuring banks to raise interest rates on savings accounts… and with the economy what it is, why shouldn’t banks start shelling out better returns?

The Wall Street Journal reports bank clients are demanding higher interest rates on their deposits… or else they’ll pull their cash and put it elsewhere. The banks’ response? Per the Journal, “Large U.S. banks are starting to pay up to keep depositors from moving their money, saying customers are becoming increasingly demanding as the stronger economy nudges interest rates higher.”

The typical interest rate paid by the biggest U.S. banks is now at a five-year high… of 0.4%

We’ll spare you the math: On a $10,000 deposit, that’s $40 in a year — “enough,” says our income maven Zach Scheidt, “to take yourself and a date to your local Cracker Barrel — provided neither of you order dessert.”

Here’s the wrinkle to these rising-but-still-pitiful interest rates: “Wall Street wealth managers are a big force behind the banks increasing deposit rates,” Zach tells us.

“It seems that these managers are looking for places to park cash and for ways to earn more on wealth that their clients are keeping out of the market.”

Key point: “If they are pressuring banks to raise rates on deposit accounts, it likely means these managers are interested in pulling money out of the stock market and putting it into savings accounts… If too many investors start believing the lie that they can get attractive interest rates on cash balances, they may start selling some of their dividend stocks.”

But the way Zach sees it, that just adds up to more opportunity for everyday investors looking to grow their income. “If dividend stocks pull back, you’ll have an opportunity to buy more of our quality stocks at discount prices.

“When it comes to generating income from your retirement savings, dividend stocks can be tremendous wealth-building tools. Not only do you receive quarterly interest payments that are many times higher than the 0.40% that banks are paying, but dividend stocks also trade higher over time, growing your wealth on top of the income you’re already generating.”

Zach compared his Lifetime Income Report portfolio with what the bank has to offer by way of wealth-building: Of 35 positions, 32 are profitable and only three are currently at a loss… that’s a 90% success rate.

“You see, by picking solid companies with stable earnings and plenty of cash flow, we’ve been able to invest in stocks that have steadily traded higher,” says Zach. “And since our companies send us reliable cash payments each quarter (and in some cases each month), you’re able to steadily grow the value of your retirement accounts.”

For access to all of Zach’s dividend-paying recommendations — and a copy of his Big Book of Income — check this out.

“Posturing about the tax plan without knowing what’s in it has the odor of Nancy Pelosi,” a reader writes after yesterday’s episode. “But one thing can be said already with certainty — the Tax Policy Center graph you displayed is bogus!

“To even comment on taxes, it helps to understand at least the basics of the code. Also, corporate taxes are in effect paid by consumers, a fact overlooked and the ignorance exploited by progressive politics.”

The 5: Uh, what was the disclaimer we put into our item yesterday?  Oh yes, “With the proviso we’re talking about a moving target…”

And yes, we’re well aware the income taxes paid by companies are ultimately borne by the customers of those companies.

We’re not posturing. We’re just keeping our lips away from the Kool-Aid about how this plan is supposed to be the most awesome thing ever for the middle class and for the economy.

“I’m not sure if I’m joking or not here,” writes one of our regulars about IRS record keeping…

“… but given that the IRS is using that antediluvian Individual Master File, isn’t this part of the perverse logic (which only an organization that would hire the likes of a Lois Lerner might think of) that the IRS might use for security?

“I mean, what kid worth his salt would even know how to break into this? Hacking into this would be similar to a hardened gang member needing to earn his stripes by stealing a car and showing up back at gang central HQ with a Yugo.

“Similar to how I understand with our ICBMs they are still using 8-inch floppies.

“I say, move everything onto a Commodore 64 file server.”

The 5: A few years after Sept. 11, FBI agents were still taking down tips by hand using triplicate carbon paper.

And the Pentagon has blown yet another deadline to be audit-ready — owing to hundreds of antiquated and error-prone record-keeping systems, most of them incapable of interacting with each other.

The Defense Department has missed one audit deadline after another since 1996. As chronicled here in The 5 earlier this year, the most recent deadline was Sept. 30. A search of Google News this morning finds no one has followed up on what anyone in Washington plans to do for a remedy; apparently “Russian Facebook bots” are a higher priority for the Beltway class…

P.S. That was fast: Yesterday, Alan Knuckman urged his Weekly Wealth Alert readers to buy call options on Wells Fargo. This morning, he urged them to sell half the position for a 51% gain… and sit tight with the rest for even bigger profits by the end of next week.

Don’t feel bad if you missed out: You could be in a position to reel in the same kind of gains by this time next week. See for yourself.

Famed investor Michael Burry cautions the frenetic buying of meme stocks reminds him of the dot-com era… plus the real estate boom of the mid-aughts. Read More

We interrupt the financial media’s collective high-five over the start of earnings season today… with a stern reality check. Read More