If it goes down — which is a big if — it’ll be the biggest tech buyout ever.

The chipmaker Broadcom Ltd. (AVGO) is looking to buy its rival Qualcomm (QCOM) for $130 billion. The deal “is likely to face intense regulatory scrutiny since the companies are both leaders in Wi-Fi and Bluetooth technology,” says The Wall Street Journal.

As iffy as the deal is now, it would have been a dead letter before last Thursday.

That’s when Broadcom announced it was moving its legal domicile from Singapore to the United States — an announcement Broadcom CEO Hock Tan made at the White House. “I want to thank you very much for choosing us,” said President Trump.

The implication of the photo op was that Broadcom would create scads of new American jobs. If in fact the Qualcomm deal goes through, it might well mean the opposite; mergers usually mean “redundancies” on the payroll.

But the move from Singapore to San Jose does mean one less regulatory hoop to jump through; if Broadcom were still a Singapore company, the Qualcomm deal would have to go through CFIUS — the Committee on Foreign Investment in the United States — which has been giving the side eye to semiconductor deals in recent months on national-security grounds. 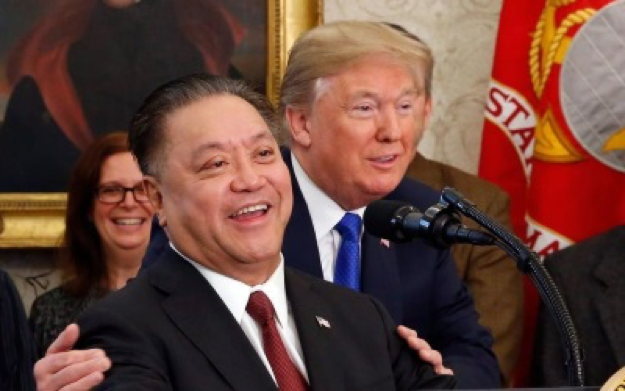 “I can’t believe I snookered this blowhard so easily!”

Here’s the thing: Less than two weeks ago, Alan Knuckman — our man at the Chicago Board Options Exchange — was noticing some curious activity in Qualcomm options.

It was enough to trigger a trade in advance of QCOM reporting its earnings numbers last week. You might recall from last month how earnings season is the 42-day window in which a handful of well-placed trades can make your retirement.

With news of the Broadcom bid for QCOM hitting the tape this morning, Alan’s option recommendation has tripled in value… and he urged readers of his 42-Day Retirement Plan trading service to sell.

Depending on when their order got filled this morning, they bagged a 205% gain — in only 12 days. A textbook trade based on the indicators Alan can spot in advance. Learn more about how his system works right here — no long video to watch.

As a new week begins, the major U.S. stock indexes are inching their way further into record territory, the S&P 500 now 10 points away from 2,600.

The mainstream is chalking up today’s move to a power purge in Saudi Arabia — about which more shortly — but that doesn’t wash. The news broke on Saturday, but the big price move didn’t start till around 10:00 a.m. EST this morning.

This is as good a time as any to mention we’re hearing more rumblings about inflation out there. Both the official and “real world” rates of inflation have been picking up steam for three straight months. It’s true the Federal Reserve’s preferred inflation measure is still moribund, but that’s because it’s a “core” rate excluding food and energy.

Crude is now up 34% from its lows in mid-June. How can you not feel an inflationary squeeze under those circumstances?

Don’t say we didn’t warn you — the “chained CPI” scam is back.

In 2011, Congress and the Obama White House kicked around the idea of using an inflation measure called chained CPI as the yardstick for Social Security cost-of-living adjustments. Not surprisingly, chained CPI would have the effect of lowering the annual COLA.

In the end, the idea was dropped… at least as far as Social Security is concerned. But we figured it would turn up somewhere else eventually… and sure enough it turned up last week in the House Republican tax plan. Using chained CPI to adjust the brackets each year would have the effect of bumping you into a higher bracket sooner than might occur otherwise.

Congressional wonks say that adjustment would generate another $89 billion in revenue over 10 years. “The change to the plan frees up money for [House Ways and Means Committee Chairman Kevin Brady] to use to address concerns by lawmakers when changing the bill further,” says an Associated Press story.

There’s too much happening too quickly in Saudi Arabia for anyone to make sense of it this soon. But there’s a thing or two we want to tease out today while the chips fall where they may.

Here’s a brief breakdown of what happened over the weekend…

Again, too much too soon to weave into a coherent narrative.

But amid this considerable tumult, the president saw fit to tweet the following while on his trip to East Asia…

This president, like many of his predecessors, is strangely enamored with a medieval monarchy where they behead people for sorcery. Saudi Arabia was the first foreign nation he visited as president; the royal family wooed him with promises of massive arms purchases and investments in American public works projects like highways, bridges and tunnels.

As we mentioned last month, there were rumors that the kingdom might be shelving its plans to take the state oil company Saudi Aramco public. The Chinese apparently had come calling with an offer to buy a 5% stake in the company — news that surely threw much of Washington, D.C., into a panic.

Couple that development with China’s plans for an oil trade price in yuan. As economist Carl Weinberg recently told CNBC, Saudi Arabia must “pay attention to this because even as much as one or two years from now, Chinese demand will dwarf U.S. demand.

“I believe that yuan pricing of oil is coming and as soon as the Saudis move to accept it — as the Chinese will compel them to do — then the rest of the oil market will move along with them.”

That would be the end of the “petrodollar” arrangement that’s underpinned the global economy for more than 40 years.

A lot to chew on, we know. But this is a story that will unfold steadily as we move into 2018; we’ll unpack the implications over the coming weeks and months…

For the record: New York Federal Reserve chief Bill Dudley will likely retire by mid-2018, about six months ahead of schedule.

Dudley will always go down in the annals of The 5 as the man who gave us the edible iPad.

In early 2011, the Fed dispatched some of its pooh-bahs into the real world to engage with real people. At that time, a rising cost of living was on everyone’s mind, but Dudley told a crowd in Queens that inflation wasn’t as big a deal as they thought. “Today,” he explained, “you can buy an iPad 2 that costs the same as an iPad 1 that is twice as powerful. You have to look at the prices of all things.”

Someone in the back of the room piped up: “I can’t eat an iPad.”

After that episode, the Fed understandably scaled back its attempts at public outreach.

Dudley — “B-Dud” was the appellation given him by friend of The 5 David Stockman — was one of four people whose voice really mattered at the Fed in recent years. With Vice Chairman Stanley Fischer already gone and Chairwoman Janet Yellen out the door in three more months, there are a whole lot of new faces coming in.

Dudley’s replacement will not be named by President Trump; unlike Fed governors, the presidents of regional Fed banks are chosen by those banks’ boards of directors.

“Re: the new tax bill before Congress,” a reader writes: “Does no one question why, only after seven long years, it does away with the inheritance (death) tax?

“Any Congress can undo the acts passed by a previous Congress, so realistically, this does nothing for anyone. No one trusts Congress to do the right thing.

“What do you think is the point of this razzmatazz?”

The 5: It’s all about the bogus “scoring” process that congressional wonks go through to estimate the “cost” of one tax cut or another. Putting off the demise of the estate tax allows other tax cuts to go into effect sooner while not blowing up the budget deficit too badly.

But you’re right; seven years is a long time. Assuming this bill passes, there’s nothing to stop another president and/or Congress from changing it long before 2024.

“Given the current state of relations between the U.S. and Russia,” a reader writes after our reflections here last week, “would you recommend any American to attend the World Cup in Russia next summer? I am considering it but am uncertain of my safety.

“Thank you. And keep up the good work!”

The 5: Heh… Legally we can’t dispense “personalized investment advice,” and we’re going to extend that to travel advice as well.

Based on previous experience, a more likely scenario is some sort of Russia-related geopolitical blowup during the World Cup.

It was during the 2008 Summer Olympics in Beijing that Washington’s puppet president in Georgia decided to attack separatists in a quasi-independent region called South Ossetia. Russian troops intervened on behalf of the separatists, and the Georgian forces retreated after five days.

And it was during the 2014 Winter Olympics in Sochi, Russia, that the United States engineered “regime change” in Ukraine. Days later, Foreign Affairs editor Gideon Rose went on the old Colbert Report and described events in, ummm, unusually frank language…

Rose: We want to, basically, distract Russia. Oh, look, you have the highest medal count, oh, you did really well…

Colbert: Here’s a shiny object, we’ll just take an entire country away from you!

P.S. Last chance: The content you’ll find at this link is so sensitive, our publishers have chosen to attach a stiff warning to it.

That was last week… and the heat they’re getting is still too strong. So they’ve made the call, and the link comes down tonight at midnight. Here’s your final opportunity to see what the commotion is all about.