In an era of epic-low stock market volatility, bitcoin is where you find the thrills-n-chills… 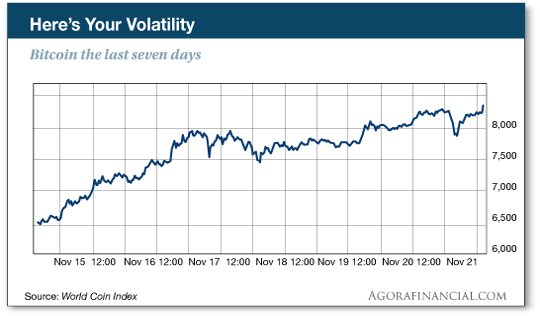 Meanwhile, Wall Street’s professional hand-wringers are starting to fret about, for lack of a better term, “peak crypto.”

Morgan Stanley has issued a report predicting a drop in sales of GPUs — the computer graphics processors essential to cryptocurrency “mining.”

“At issue,” explains our resident crypto millionaire James Altucher, “is whether mining cryptocurrency will continue to be lucrative.

“Like bitcoin, the difficulty of mining ethereum is programmed to gradually increase over time. As a result, mining of ethereum has already become significantly less profitable than it was this past summer.

“Additionally, the recent stagnation in the price of ethereum has led many to lose faith in the growth prospects for the digital currency.”

On the surface, this all makes sense: As colleague Emily Clancy explained here last Saturday, mining of bitcoin alone is consuming as much electricity as the nation of Nigeria — population 186 million. In theory, crypto mining reaches a point where it becomes uneconomic — even in mining hotbeds like China, where electricity is subsidized.

“However, the report underestimates two critical points that will continue to produce strong demand for graphics cards,” James tells us.

First, the price of ethereum could resume its rise. This morning ethereum is $371 — approaching its near-$400 highs reached earlier this year.

Second, perhaps even more importantly, “graphics cards used for mining,” says James, “can be used interchangeably by miners to mine other currencies (such as zcash or monero).

“Cryptocurrency miners have a longer-term investment horizon and are incentivized to continually refresh equipment. With cryptocurrency still in its infancy, I believe this market still has tremendous growth potential for patient investors.”

For the record, James first advised buying bitcoin on dips here in The 5 on Oct. 20 — when bitcoin was around $6,000.

James is still accepting new registrants for the current session of his Cryptocurrency Masterclass. Enroll now and you’ll learn exactly how he made $1.8 million off a single crypto trade. James extends his personal invitation when you follow this link.

For no obvious reason, the major U.S. stock indexes are flirting with all-time highs last reached two weeks ago.

Gold took another hit after we went to virtual press yesterday, but it’s hanging tough this morning at $1,282. Crude is back above $57.

The big economic number of the day surprised on the upside: Existing home sales jumped 2% in October. Both single-family homes and condos are showing strength.

But it’s an economic number the mainstream usually ignores that has our attention this morning.

The Chicago Fed National Activity Index crunches 85 indicators for a broad picture of the economy. It has a history of foreshadowing nearly every recession going back to 1970. This morning’s number is nowhere near that recession threshold of minus 0.7; instead, it’s the strongest in nearly three years at plus 0.28. 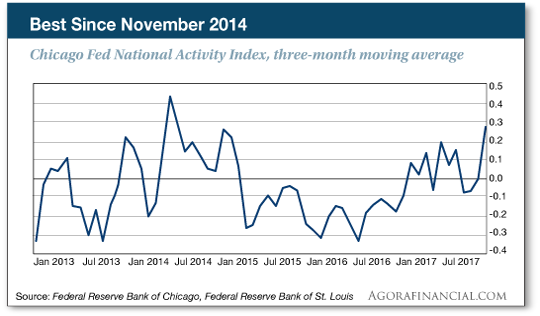 Put this number together with the leading economic indicators released yesterday… and the strong manufacturing and housing figures mentioned here on Friday… and it’s hard to escape the conclusion that we’re in the boom phase of the boom-bust cycle.

As you know, the president is replacing Yellen as Fed chair effective next February. But a question remained whether Yellen would remain in her post on the Fed’s Board of Governors — a position she could have held onto, if she chose to do so, until 2024.

Yesterday she confirmed she’ll give up that post as well when Jay Powell takes over as chairman.

That means by the time all the currently vacant slots are filled, six of the seven governors will be Trump appointees. The one outlier will be Obama appointee Lael Brainard.

“Make no mistake, there are lots of investors relying on luck right now in this market,” says our Jonas Elmerraji. “They’re buying stocks and hoping that they keep on going up and to the right.”

It’s an approach that works great… until it doesn’t.

“We’re approaching things a different way,” Jonas recently assured his Kinetic Profits readers. “Our quantitative approach to trading completely wipes luck out of the picture. At the same time, it gives us a huge degree of downside protection if the markets roll over.”

Jonas knows something that almost takes the luck out of the equation. Something most people don’t know. Jonas applies mathematical analysis to his proprietary trading strategy he calls Kinetic Windows. “It analyzes decades of price data to show when a stock is statistically most likely to be in motion — thus the ‘Kinetic’ part of the name.

“I’ll spare you all the math, but as it turns out,” says Jonas, “if you can model the market well enough, good luck and bad luck will cancel each other out over the long term and all you’ll be left with is the power of the strategy itself.”

Before launching Kinetic Profits this year, back-testing revealed a win rate between 83–93.5%. Since launch, that number has held up. “This is the sort of environment where our strategy really flexes its muscles.”

The strategy is so lucrative you won’t believe what some people will do to get their hands on it. See for yourself.

So the U.S. Treasury would have us believe the Iranian government is lining its pockets by… counterfeiting the currency of the Middle East’s poorest country.

From the Reuters newswire: “The U.S. Treasury Department on Monday sanctioned a network of individuals and companies it said counterfeited Yemeni bank notes potentially worth hundreds of millions of dollars for Iran Revolutionary Guard’s Quds Force.”

Uhhh… Yemen was an economic basket case even before Saudi Arabia started bombing it and imposing a starvation blockade 2½ years ago. Yemen’s highest-denomination bank note, 1,000 rials, is worth less than $4. 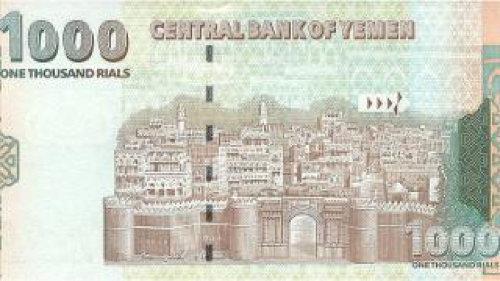 But supposedly the Quds Force raised hundreds of millions of dollars by counterfeiting the Yemeni currency. Count us baffled…

[While we’re at it: How is it that 60 Minutes did a huge story on Sunday about the humanitarian catastrophe that’s descended on Yemen — at least 10,000 dead, 2 million displaced, 1 million with cholera — and not say one word about Washington’s role in contributing to that catastrophe?

As we’ve mentioned before, Saudi Arabian jets get targeting and refueling assistance from the United States. Says Kate Gould of the Friends Committee on National Legislation, “The [United States] is operating these gas stations in the sky to fuel Saudi and UAE bombers as they rain down terror on Yemeni water and other sanitation infrastructure — the last safeguards Yemen has against these disease outbreaks sweeping the country.”

This began with Obama; it’s accelerated under Trump. At no time have the people’s representatives in Congress been allowed a say. When a bipartisan group of congressional backbenchers tried to force a vote this month under the War Powers Act, the effort got sandbagged by House Speaker Paul Ryan and Minority Whip Steny Hoyer.]

After we noted yesterday that nearly half of all eligible voters sat out the 2016 presidential election, a reader wrote in:

“As far as I’m concerned, in the 2016 election having only 4% of those Americans who even bothered to vote voting for the Libertarian Party’s Gary Johnson is a natural disgrace. A former New Mexico governor with a long track record of fiscal sanity who would have approached getting involved in constant wars as against the national interest, against the likes of Hillary Clinton and Donald Trump, shows just how much the entire election system is rigged to benefit the Republican and Democrat parties.

“The fact that only two political parties are allowed to compete in the televised presidential debates shows that America is a corrupt system that only benefits those in power and their billionaire benefactors who donate to their campaigns.”

The 5: Heh… RT aired a third-party presidential debate between Johnson and Green Party candidate Jill Stein in 2012, which was spotlighted earlier this year in the cherry-picked U.S. intelligence “assessment” of how those dastardly Russkies are “sowing discord” in our fair land. See, you too are a “useful idiot”!

“The cost of Thanksgiving dinner is down six bits from last year, not three,” a reader writes by way of emendation. “There are eight bits to a dollar.”

The 5: Alert, you are. We’ve said it before but we really do have the smartest readers in newsletter-land…

“Your reader with a very dark view on NATO is, alas, a bit weak in history,” reads our next email, “when he claims ‘Bosnia was… the only place in Europe Hitler was unable to take.’

“Well, I am Swiss and I was born in 1941 and I really cannot remember Hitler ruling Switzerland at any time.”

The 5: At the risk of splitting hairs, did Hitler really try?

On your editor’s too-long reading list is Target Switzerland by Stephen Halbrook — which tells the story of how the well-armed Swiss people disabused Hitler of the notion that an invasion would be a cakewalk.

“Also the ‘hooch’ comment: I mean, come on, who doesn’t have a few drinks on Thanksgiving? Happy Thanksgiving, 5.”

The 5: And likewise to you!

P.S. Good news for MSN and Hotmail users who’ve been getting error messages when clicking on links in our emails: Problem solved.

Moments ago, our web team forwarded me an email from our IT folks: It was utterly inscrutable, with geek-speak like “a dot back to 7th chunk” and “our UAT environment.” But the bottom line is that the problem should be fixed; even links within emails we sent weeks ago should be fine now. Thanks again for your patience while we figured it out.