The Spooky Bitcoin Message From the Future

Again, this “time traveler” wrote the article in 2013. So up to this point, he’s merely rehashing what’s already happened, teeing up his projected future.

For the record, the Reddit poster is not Agora Financial contributor James Altucher… even though he appeared on CNBC yesterday and forecast $1 million bitcoin… by 2020.

That said, James did go on CNBC in 2013 — the same year as the Reddit post — and explain why he opened an online store that accepted bitcoin as payment for his book Choose Yourself. No one had done anything like that up till then. “People thought I was crazy,” he tells us. “They thought cryptocurrencies were a scam and a passing fad.”

The occasion for James’ $1 million forecast was a tweet yesterday from John McAfee, the colorful software entrepreneur.

On CNBC’s Squawk Alley, James was asked whether he agreed: “I’ll say $1 million by 2020, as well, easily,” he replied. “There’s 15 million millionaires around the world. All their financial advisers are going to say, ‘Hey, buy a bitcoin. You need some exposure.’

“There’s only going to be 21 million bitcoins minted ever in history. That’s going to also drive demand.”

At this pivotal moment for bitcoin, we’re being inundated with questions. With that in mind, we’re organizing a Q-and-A session with James. You can submit questions that he’ll answer during a LIVE event from his home in New York this coming Monday evening at 7:00 p.m. EST. Best of all, we’ll be giving away $1,000 to a randomly-selected viewer every minute the event is in progress.

There’s no cost for access to this event. You can sign up and submit your questions at this link.

[By the way: The saga of the Reddit “time traveler” does not end well. By 2025, nearly every bitcoin billionaire has gone into hiding behind walled “citadels,” and the global economy is shrinking at a rate of about 2% a year. Rest assured this is not how the story ends to James’ way of thinking!]

While bitcoin retrenches, the Dow has crested the 24,000 level for the first time.

But not the Nasdaq. It’s up on the day, but not enough to make up for a 1.5% tumble yesterday. It was a lousy day for the so-called FANG stocks — Facebook, Amazon, Netflix and Google parent Alphabet. Put together, they lost $60 billion in market value… 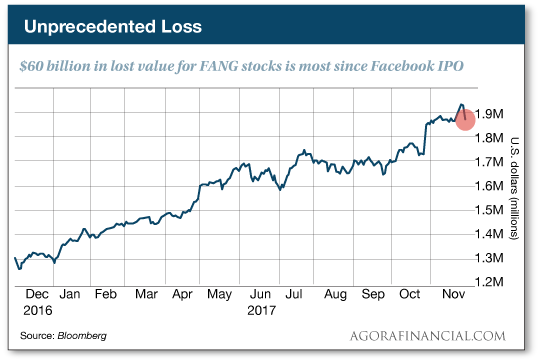 “One bad trading day probably isn’t the end of the world for the tech sector,” Greg Guenthner writes in today’s Rude Awakening. “The market gods have rewarded anyone holding even one or two FANG stocks in 2017. Even after yesterday’s face-plant, the top stocks in this elite group remain up more than 50% year to date.”

But for now Greg sees “rotation” out of the tech sector and into… retail. Yes, bombed-out and left-for-dead retail — it’s breaking out of its 2017 funk. “The sector is quickly becoming a new market leader during the busy holiday shopping season.”

Gold, meanwhile, got whacked again today. It’s back down to a three-week low of $1,275. Can’t blame it on dollar strength, either; the dollar index is down, a bit at 93 on the nose.

Here’s the most definitive sign yet that inflation is turning the corner after a steady downward slide all year.

The Commerce Department is out this morning with the “core PCE” number. When the Federal Reserve talks about its 2%-per-year inflation target, this is the number it has in mind. After starting 2017 near 2%, it’s been down, down, down… until now. The October number rings in at 1.4%. 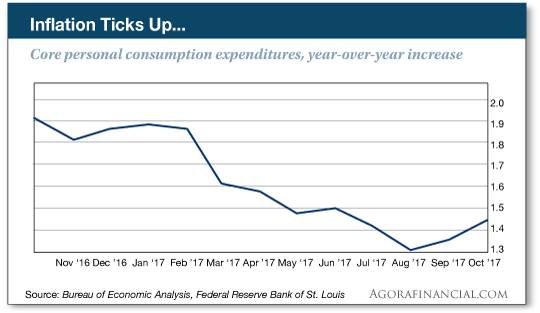 For weeks, Jim Rickards has defied conventional wisdom by telling us the Fed won’t raise interest rates at its next meeting on Dec. 13 because the core PCE number’s been too low for the Fed’s liking. But this morning’s release changes the game — somewhat. “On balance, the number is probably just enough (barely) to justify a rate hike,” he says. “I’ve raised my probability of a December rate hike from 30% to 55%.”

But wait: Two other factors could still derail a December rate increase.

The Senate is set to vote on its version of the tax-reform bill tonight or tomorrow. “If it does not pass,” says Jim, “the disappointment factor will be huge and could send the stock market tumbling.” As it happens, the likelihood of passage improved this morning when Sen. John McCain said he’d vote for the bill.

There’s still one other potential for disappointment — the prospect of a “partial government shutdown” starting a week from tomorrow. That’s the deadline for Congress and the White House to reach some sort of budget deal.

“Even if the shutdown occurs,” says Jim, “it’s likely to be over in a week or so. But there are only three business days between the scheduled shutdown and the FOMC meeting. It’s hard to imagine the Fed tightening financial conditions when the entire government (or at least ‘nonessential personnel’) are locked out of their offices.”

[Ed. note: Jim has just fessed up to an important secret he’s kept for 15 years.

In fairness, he had no choice. It was part of a top-secret CIA project; the agency gave clearance to fewer than 100 people worldwide… and he was one of them. Now, for the first time, he’s “declassifying” everything. You’ll understand once you watch this two-minute video.]

Crude trades at $57.21 a barrel after an anticlimactic OPEC meeting in Vienna.

Ministers agreed to extend the current round of production cuts through the end of 2018; they’d been set to expire in March. As we go to virtual press, separate talks with non-OPEC member Russia — the world’s No. 2 producer — have reached the same conclusion. We’ll tease out some of the longer-term implications tomorrow…

While not directly related to penny pot stocks, we’re compelled to report a speed bump on the road toward cannabis legalization — and what we can only hope will be a test case.

“Sometime in the next couple of years,” we mused here on Oct. 10, “‘conservative’ Americans are going to have to reconcile their professed support for the Second Amendment with their law-and-order attitude toward weed.” Under federal law, marijuana users are barred from owning firearms… and that’s a state of affairs the National Rifle Association seems content with, even though more than half of all U.S. states have legalized medical or recreational cannabis.

Which brings us to a story at the Daily Caller this week: “Hawaiian authorities have asked medical marijuana users to ‘voluntarily surrender’ firearms due to their medicinal status. This may mark the first time a law enforcement entity has moved to confiscate guns from cannabis patients.”

Hawaii’s first medical marijuana dispensary opened in August. It turns out the state keeps a database of both medical marijuana patients and firearms purchasers. “That allowed the Honolulu police to cross-check and compile a list of MMJ patients in the state’s firearms registry,” says the website Leafly.

Folks on that list got a letter from the Honolulu Police this month giving them 30 days to “voluntarily surrender” their guns and ammo. The letter did not specify an “or else” if the recipient does not comply. 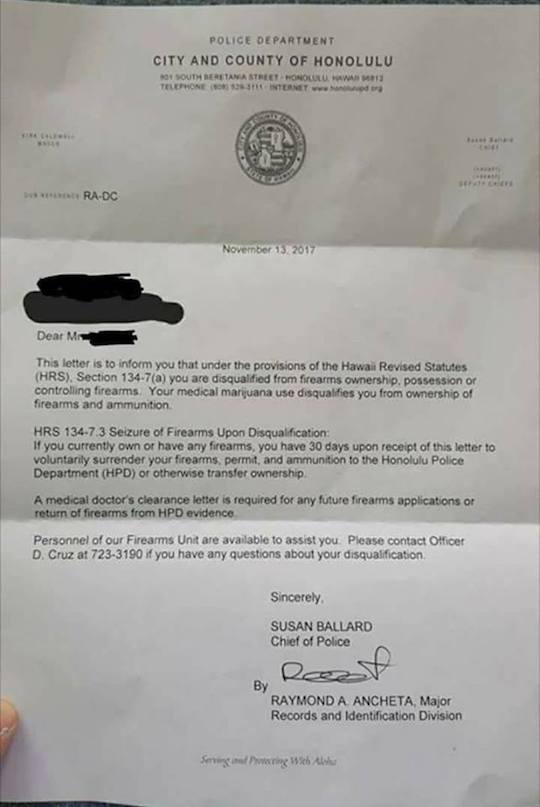 How about it, NRA? Is this a bridge too far? Maybe you don’t care because Democrats have carried Hawaii in every presidential election since 1988. But as the wave of legalization rolls on (and more and more of your membership is investing in penny pot stocks) eventually this is going to be an issue somewhere in a “red state.” You can’t duck it forever…

To the mailbag — where not surprisingly, bitcoin is on readers’ brains…

“In 1841 Charles Mackay’s new book, Extraordinary Popular Delusions and the Madness of Crowds, was released, and I wonder if the bitcoin saga may end up joining those mentioned in his book.”

The 5: Almost certainly. But for reasons laid out here yesterday, we’re not there yet. (Stick around for an Overtime briefing in today’s 5 where James Altucher addresses the bitcoin-bubble question in further depth.)

By the way, your editor’s reading list for the coming weeks includes Devil Take the Hindmost, Edward Chancellor’s authoritative study of bubbles, based in part on Mackay’s work and published near the peak of the dot-com bubble in 1999. It will sharpen my own sensitivity to the presence and timing of bubbles and inform my discussions with our gurus and analysts.

It’s a point of pride here at Agora Financial that we called the housing bubble of the mid-2000s — in December 2004, no less, when doing so was extremely unfashionable. (The infamous Time magazine cover “Home $weet Home: Why We’re Going Gaga Over Real Estate” came in June 2005.) It was vision like this that attracted me to join the firm in 2007 and walk away from a 20-year career in broadcast news.

All the same, we can’t get cocky: I daresay our biggest blown call was a failure to recognize the bubble in shale energy in 2014.

We were so enthralled by the newfound bounty of oil and gas… and the good ol’ American ingenuity that made it possible… that we were blinded to a deeper reality: Because the Federal Reserve had been keeping interest rates so low for so long, many explorers and drillers were borrowing up to their eyeballs.

In other words, a lot of that exploration and drilling took place only because of reckless Fed policy. It was an artificial boom, destined to end in a bust. We should have known that $17-an-hour Walmart greeters in North Dakota represented a huge hairball of “malinvestment,” to use the term coined by the Austrian School economists.

In light of gold’s renewed slump of recent days, a reader writes…

“We may have to tweak the old adage to ‘The gold market manipulators can irrationally manipulate longer than you can stay solvent.’”

The 5: Heh… That depends on when you bought, of course. Someone who bought at the peak in September 2011 is still feeling a lot of pain.

But if you bought at the $1,050 range in late 2015, you can obviously ride the ups and downs in more comfort. By the way, we published remarks at that time from commodities legend Jim Rogers saying $1,050 likely marked the bottom because it was a 50% “retracement” from the $1,900 high.

With the benefit of two years’ hindsight, it certainly looks as if fears of gold falling back below $1,000 are unfounded…