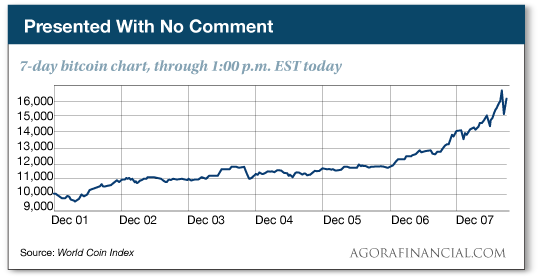 How do we arrive at it? Former Federal Reserve chairman Alan Greenspan piped up yesterday about bitcoin. “Bitcoin is really a fascinating example of how human beings create value… and it’s not always rational,” he told CNBC. “It is not a rational currency in that sense.”

Oooh — shades of his notorious remark about “irrational exuberance” in the stock market. Notorious because he said it in December 1996, when the Dow was roughly 6,450. In January 2000, the Dow peaked around 11,700 — an increase of 81.4% in just over three years. If you’d used Greenspan’s comment as a signal to exit the market, you’d have regretted it mightily.

As we say, a conservative prediction: “Crypto millionaire” James Altucher was on CNBC last week forecasting $1 million bitcoin by year-end 2020. (He’s made some even bolder cryptocurrency forecasts in an interview whose distribution has been strictly limited to Agora Financial readers like you. You can watch it right here.)

Meanwhile, the big banks are registering a feeble protest before bitcoin futures trading launches this coming Sunday on the CBOE Futures Exchange.

The Futures Industry Association — which despite its name is dominated more by Wall Street banks than by futures exchanges — has sent the proverbial strongly worded letter to the Commodity Futures Trading Commission.

The CFTC, the letter protests, “did not allow for proper public transparency and input… It is also our understanding that not all risk committees of the relevant exchanges were consulted prior to the certification to launch these products.”

Isn’t that nice of the banks, looking out for you?

The Financial Times, which was first to get its hands on the letter, points out what the banks are really upset about: “Futures brokers are worried they will bear the brunt of the risk associated with bitcoin futures, because the margin that backstops the contract is placed in a clearinghouse… Several brokers among the top 10 largest providers have privately confirmed to the Financial Times that they will not clear the products immediately.”

Whatever. It’s not as if the CFTC will have a last-minute change of heart.

And the banks will come around eventually, said the aforementioned James Altucher last week on CNBC. “Mainstream banks will accept bitcoin, and will start offering storage and software access. They will also create cryptocurrency derivatives — as the CME is about to start doing.”

(Once more, that was what James is telling mainstream audiences. But he’s made a few other predictions about cryptocurrencies — predictions he’s not yet shared on TV. Check it out at this link.)

While bitcoin soars, more conventional asset classes are either flat or floundering.

The major U.S. stock indexes are slightly in the red. Like yesterday, blue chips are holding up better than small caps; the Russell 2000 is down 1.5%.

Gold got kneecapped again; now it’s down to a $1,253 — a level last seen in late July. And once again, you can’t chalk it up to a strengthening dollar; the dollar index is up only slightly at 93.7.

As we told you a few weeks ago, Agora Financial’s macro maven Jim Rickards forecasts a 70% likelihood the United States will launch a preventive attack on North Korea no later than March 20, 2018 — a timeline based on discussions in October with CIA Director Mike Pompeo.

“The market is not even close to pricing in these probabilities,” Jim said yesterday. “The market will begin to do so as the D-Day draws near and the signals become clear.”

That was during his confirmation hearing a few days ago. On Tuesday his nomination sailed through the Senate Banking Committee; the full Senate is sure to follow.

Goodness knows we hold no brief for the banks around here. (See above.) Echoes of 2008 still ring in many Americans’ ears, and understandably so. But all the same, some of the mainstream reactions to Powell’s regulation remarks seem, well, overwrought.

“I certainly understand the concerns,” says our income specialist Zach Scheidt. “But as is often the case, the truth with financial regulations lies below the media headlines. As investors, we need to look past the hyperbole and zero in on the details.”

Not to mention the $36.5 billion banks have spent since 2010 to comply with regulations. Predictably, that’s been passed onto consumers — to the tune of $310 per household each year, according to the American Action Forum.

“Rather than buy into the media’s sensational response to Powell’s regulatory comments,” Zach says, “I’d rather figure out a way for us to profit from them.

“As chairman of the Federal Reserve, Powell will have significant influence on how the banks are regulated. And it is clear that as Trump’s nominee, Powell will be naturally biased to reduce the regulatory burden banks currently operate under.”

If Powell reduces banks’ operating costs — Zach believes he will — that means higher profits from some of Zach’s favorite bank stocks in the Lifetime Income Report portfolio.

“Our positions have handed us some attractive profits so far,” says Zach. “Not only have our shares moved higher, but these banks have also handed us attractive dividend payments.”

Zach urges “acting quickly on these recommendations because the banks should trade higher throughout Powell’s confirmation hearing.”

Pizza Hut’s betting you want some beer — or vino? — with that pizza.

In an effort to prop up sales, Pizza Hut’s testing beer and wine delivery alongside its pies in certain U.S. cities. First up? Phoenix, next month.

The Hut’s partnering with Anheuser-Busch brands; six-packs of beer will cost a flat $10.99. As for wine, the company hasn’t settled on a particular brand or whether they’ll sell bottles or single servings.

In October, Pizza Hut rolled out a system to deliver hotter pizzas to your door — hotter by exactly 15 degrees. A little gimmicky, but the company’s trying to shore up flagging sales. The alcohol delivery scheme is aimed at edging out competitors Domino’s and Papa John’s, which only deliver the soft stuff.

Of course, delivering alcohol comes with some logistical issues — Pizza Hut stores will have to obtain liquor licenses. Also, the pizza delivery guy (or gal) will have to check IDs at the door in order to hand over the hooch.

Given our ongoing interest in penny pot stocks, we’re compelled to ask: Is this teeing up recreational marijuana delivery with pizza? Only problem is the pizza would be cold by the time you’d get the munchies…

“I am not sure I understand how all this works,” writes someone we gather is a newer reader.

“Who should we trust? How can one regular person make any sense of this??? Please help me understand.”

The 5: We have a large and growing stable of contributors at Agora Financial. They’re all smart and highly opinionated. They don’t always agree.

And we don’t enforce a “company line” on them. We respect your intelligence enough to present opposing opinions now and then and let you reach your own conclusion.

That’s the short answer to your question. We gave a much longer answer three years ago. Indeed, we devoted an entire episode of The 5 to it; if you want more insight into why we do what we do, you might want to give it a look.

“I agree with Jim — bitcoin operates on the greater-fool theory,” a reader writes.

“Something made out of nothing equals nothing. Only time will tell.”

“Bitcoin certainly might crash and burn, or another cryptocurrency might surpass it, but Rickards’ case against bitcoin is ludicrous,” another reader counters.

“He’s says bitcoin won’t work as money because it’s not elastic. Well, that’s the same objection most mainstream economists level at gold. The fact that bitcoin and gold are inelastic is a good thing. The idea that the ‘Money supply needs to expand in line with economic growth’ is a fallacy that’s been refuted by Murray Rothbard, among others.

“Rickards says, ‘In order to be a widely used store of value… holders need a place to invest the bitcoins.’ Really? And where can people invest their gold today? Exactly. He completely ignores that it’s still very early for bitcoin and that with continued success, various instruments to invest bitcoin will likely emerge.

“As to the threat posed by quantum computers, he assumes that there can’t or won’t be a solution to this problem. Furthermore, how can quantum computers be a problem for bitcoin but not for the DLT world money that he says the IMF is developing?

“A question for Rickards (and other naysayers like Peter Schiff): Hypothetically, what conditions would have to be met (e.g., market cap, rate of adoption, etc.) and what additional successes would bitcoin have to have for you to change your mind about it?”

“Seems Jim is jealous of all the money pouring into cryptos and not into gold,” writes a reader who signed up for lifetime Rickards access and is a new James Altucher reader.

“Seems James is playing his program as planned. Meanwhile, Jim has a new Project Prophesy.

“The question is will Jim help James predict the bubble peaks and bottoms in the crypto market? Or is this another Washington turf battle? Maybe they need to cut a deal?”

The 5: Heh… Jim and James are under the same tent, as it were, but they will operate quite independently of each other.

But as we continue to grow, there will be occasional opportunities for collaboration. That’s all we’ll say for the moment. Stay tuned…

Finally, two brief emails of unsolicited praise (which we never turn down…)

“I enjoy reading The 5 Min. Forecast. It provides information that is useful and interesting and doesn’t take 30 minutes to get to the point of like most of the other emails I receive.”

“Just wanted to say I love The 5! As a 22-year-old recent college graduate, this helps me understand the world just a bit better in such uncertain times. Keep up the great work!”

The 5: Thanks for the inspiration!

But zooming back from the hour-to-hour movements, James Altucher says a massive cryptocurrency shakeout is coming in the next four months — six at the most.

Will you be ready? We urge you to check out the information he’s not sharing during TV interviews — right here.