For many of us, bitcoin is a fun and profitable speculation. For some, it’s a way to stick it to the man and “opt out” of a corrupt system wrought by Wall Street and central bankers. But for a few… bitcoin is a lifeline.

“This is a matter of survival,” Caracas resident John Villar tells The Associated Press. Thanks to Venezuela’s train-wreck socialist economy, Villar hasn’t been able to obtain multiple sclerosis drugs for his wife domestically for two years. But with bitcoin, he can buy them from overseas and have them delivered by courier.

“The number of Venezuelans using cryptocurrencies remains unclear,” says the AP story, “but weekly bitcoin trading volume through one popular website has soared from about $225,000 earlier this year to nearly $2.1 million in the first week of December — this in a country where the monthly minimum wage fetches less than $2 on the black market.”

“Dollars remain the go-to currency for many Venezuelans seeking to get rid of bolivars,” the AP story elaborates, “but procuring them can be difficult and generally requires a black market broker. Buying bitcoin eliminates the need for an intermediary because transactions can be done peer-to-peer. In addition, saving bitcoin does not require a foreign bank account. Venezuelans cannot hold dollars in a local account.”

In contrast, anyone with a smartphone can transact fairly swiftly using bitcoin.

These developments affirm a forecast Agora Financial contributor James Altucher shared with his readers a couple of weeks ago: “At least one country’s currency will likely fail soon — probably Argentina’s or Venezuela’s. I believe this event will lead to massive adoption of bitcoin within that country. Bitcoin could rise more than $50,000 when it happens.”

[Ed. note: As you probably know by now, James is on record forecasting $1 million bitcoin by the end of 2020. But that might not be the most outlandish cryptocurrency forecast he’s made. If you haven’t checked out his confidential briefing for Agora Financial readers, now’s the time — here’s the link.]

If stock traders had any jitters about the tax bill’s prospects for passage yesterday, they’ve cast those qualms aside today.

Yesterday, the Dow registered its first down day in a week. But as we write this morning it’s up half a percent, in record territory at 24,639.

Gold, meanwhile, is holding onto the week’s gains at $1,255. In light of the turnaround we noted here yesterday, Alan Knuckman — our man in the Chicago futures trading pits — says if gold can push past $1,270, that would be a very good sign.

Later today, Republican leaders in Congress will finally get around to releasing a draft of the tax bill that reconciles the differences between the House and Senate versions. The release is set for 5:30 p.m. EST — which sure doesn’t say much about the GOP’s conviction level. It’s a long-standing Washington tradition to “bury” bad news by releasing it after the close of business on Friday.

We don’t have much more to say about the tax bill until we see the particulars. We imagine we’ll have plenty to say next week as the GOP scrambles to pass both the tax bill and a fiscal 2018 budget. Oh, and set a new debt ceiling. All by a week from today. Heh…

The day’s economic numbers are highlighted by industrial production — up 0.2% in November, according to the Federal Reserve. The year-over-year increase is 3.4%, the strongest since late 2014.

More important than the headline number is the manufacturing component, which also rose 0.2% in November — on the heels of a blistering 1.4% October increase. It’s a decent showing, but not a barnburner.

Allegedly, after two decades of broken promises, the Pentagon is about to undertake an audit.

We missed it at the time, but the Department of Defense made the announcement a week ago yesterday. “It is important that the Congress and the American people have confidence in DoD’s management of every taxpayer dollar,” said Pentagon Comptroller David Norquist. “Beginning in 2018, our audits will occur annually, with reports issued Nov. 15.”

It was four years ago we first took note of the Pentagon’s repeated failure to be audit-ready. Congress passed a law in 1990 requiring all federal agencies to submit to an annual audit. The Pentagon was supposed to be ready by 1996. It wasn’t — in large part because the Pentagon has no fewer than 2,100 accounting systems spread across the armed services and various agencies. Few of them are capable of talking to each other.

In 2009, Congress “got tough” and imposed a new cross-your-heart, hope-to-die deadline for the Pentagon to be audit-ready — Sept. 30, 2017. If you check your calendar, you’ll notice that date has already come and gone.

The failure to meet the deadline wasn’t for lack of effort; a Reuters story in 2013 described how “many of the costly new systems don’t work. Several were canceled outright as failures after amounts exceeding $1 billion were spent on each. Others were finished but fall well short of performing intended tasks.”

From the date of the Pentagon’s first blown audit deadline in 1996, the “missing money” has been piling up.

How much are we talking about?

On the day before the Sept. 11 attacks in 2001, Defense Secretary Donald Rumsfeld confessed, “According to some estimates, we cannot track $2.3 trillion in transactions.”

The 2013 Reuters story upped the estimate to $8.5 trillion — again dating back to 1996. (That’s half a billion a year, more than one-eighth of Uncle Sam’s annual budget.)

By last year, a Pentagon inspector general report came up with a figure of $6.5 trillion for the Army alone.

This year, Michigan State economist Mark Skidmore undertook an attempt to update the overall figure for the Defense Department. He recruited two grad students and teamed up with a former assistant secretary of Housing and Urban Development, Catherine Austin Fitts.

They expanded their effort to include not only the Pentagon but also HUD. (Ms. Fitts uncovered considerable fraud while at HUD during the 1990s; for her whistleblowing efforts, the Deep State made her pay a dear price in both legal fees and career prospects.)

They submitted queries to federal agencies, most of which went unanswered. And they dug into federal websites. At one point, the feds detected what was going on and they disabled the links to all the documents tracking the missing money; fortunately, the researchers were downloading the documents as they went along.

The total they came up with? For the Pentagon and HUD, covering the years 1998-2015… the total in “undocumented adjustments” is $21 trillion.

Skidmore revealed his findings on Dec. 3 during the “USA Watchdog” podcast. Coincidentally or not, the Pentagon announced its new-and-improved audit plans four days later.

Will this one finally fly, after 28 years of failed effort? Again, we’re promised an audit next Nov. 15, 11 months from today. Check back with us then…

To update an expression from olden days, “There’s gold in them thar landfills!”

A study backed by the United Nations finds consumers dumped over $20 billion worth of gold in electronic waste last year alone.

The study defines electronic waste as anything with a plug or a battery — toasters, alarm clocks and, of course, cellphones fit the bill.

The study says consumers are buying new rather than repairing damaged electronics. Say the screen cracks on your iPhone. Make your way to the Apple store, chat with a millennial “genius” and buy the latest iPhone iteration… then toss the old one in the kitchen trash.

Here’s the rub, according to a story from the metals site Kitco: “The precious metals found in electronic waste include gold, silver, copper, platinum and palladium. Discarded devices also contain iron and aluminum.

“The recycling potential is staggering here, with $22.2 billion worth of gold — 500 metric tons — simply thrown away on a global scale… There is a similar story with silver, as 1,600 metric tons get discarded, totaling around $1 billion…

“Electronic waste was at a record 45 million metric tons worldwide in 2016,” the story adds. “This is equivalent of almost 4,500 Eiffel towers.”

Just take a look at the resources dumped at landfills… 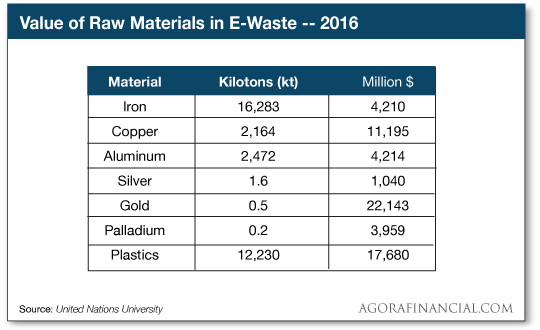 The moral of the story? Dust off the metal detector, head to the local dump… and hold your breath!

On a serious note, check out responsible ways to recycle electronics here.

To the mailbag: “I’d like to throw out the thought that gold has been sinking this fall because the small holders are dumping some of it to buy bitcoin with the inverse supply/demand kicking in.

The 5: It’s a valid thought. And you’re in good company; veteran market watchers like Louise Yamada have speculated as much. But it’s a hard thing to quantify.

Still, as noted here yesterday, the worst might be over for gold.

A reader weighs in on the tax bill: “While we must await final details to effectively comment on who benefits, one thing is already clear: The rich, i.e. Buffett, Romney, Trump and friends, etc., are not affected by lower or higher income tax rates.

“Why? Their incomes aren’t from wages or other sources taxed at ordinary rates.

“Schumer and Pelosi decried the fact the rich didn’t pay their fair share, paying only 16% in taxes. How do they justify their current claims these same rich would get the biggest tax cut at the expense of the middle class? A lie! Their rates didn’t get any lower.

“Corporate tax cuts benefit everyone, businesses, shareholders, employees, consumers, the economy. That also is a fact.

“That a high earner might save more dollars than a low earner is also elementary. But on a percentage basis the savings amount to approximately 15% across the board for strict wage earners using standard deductions, if you run the numbers. However, as stated above, smart rich people don’t have ordinary incomes.”

The 5: Indeed. As we’ve mentioned many times before, the ultra rich — the 0.1% — structure their finances in a way that they book very little “income” that gets reported on a Form 1040. It’s why Warren Buffett is disingenuous when he carps that income tax rates on “the rich” aren’t high enough; raising them would affect only people on rungs of the economic ladder beneath his own.

P.S. For three straight weeks, Alan Knuckman’s Weekly Wealth Alert has booked a winner of 50% or better — including 74% in just three days.

Have you upgraded your account with us to take advantage of these trades? Learn how you can do so right here.