Tax Reform: The Good, the Bad, the Ugly

Bitcoin poked its nose abo ve $20,000 yesterday; this morning it’s pulled back to $18,704. Bitcoin futures began trading on the Chicago Mercantile Exchange last night; the rollout went more smoothly than it did on the Chicago Board Options Exchange a week ago.

“All of this is to say although the market is growing rapidly, mainstream awareness of cryptocurrency will continue to grow, likely increasing interest and investment.”

But as James warned us in October, “95% of cryptocurrencies are scams or will go to zero.”

What to do now? You don’t want to miss this urgent video update.

To the non-crypto markets… where it appears optimism about the tax bill is putting wind in the sails of all the major asset classes.

One economic number of note this morning — homebuilder sentiment. The Housing Market Index from the National Association of Home Builders clocks in this morning at 74 — the highest reading since 1999. No, not 2005, when the housing bubble was nearing its peak. But 1999, when the bubble was just getting started. Crazy as it sounds, the current housing boom might still be in its early stages…

Anyway, the tax bill: The final version was released to the public late on Friday. Votes might come as early as tomorrow; passage seems reasonably certain, even with a slender Republican majority in the Senate.

We’re going to devote the lion’s share of today’s 5 to the tax bill — not the obvious stuff you probably saw over the weekend, but follow-up coverage to some important but under-the-radar themes we’ve been following these last few weeks…

First the good news, and perhaps the most important provision for investors: The odious “FIFO” proposal was left out of the final bill.

Had it been included, you’d have faced new limits on how you could sell part but not all of a stock holding. Say you’d bought 25 shares of XYZ Corp. at $50 in 2012 and another 25 shares at $100 in 2015 and the current share price is $80. Under the FIFO rule, if you wanted to sell some of your holdings to raise a little cash, you’d have had to sell the profitable shares you bought first — hence the name “first in, first out.”

Fortunately, FIFO was left on the scrap heap; you can still sell the shares you bought more recently and book a capital loss, with the attendant tax savings.

Also on the plus side of the ledger: The “Pease limitations” on itemized deductions go away.

The Pease limitations — named after a congressman from Ohio — came into effect in 1990 at the same time Bush the Elder went back on his “read my lips, no new taxes” promise. Under the Pease limitations, itemized deductions start phasing out once you achieve a certain level of income.

The rules were repealed with the tax cuts enacted by Bush the Younger. Then they came back five years ago under Obama. Now they’re going away again.

Hard to keep track, we know. Maybe we should have a pool for when some future Congress and president will bring the Pease limitations back…

Now for a mixed bag: The “marriage penalty” gets better in some ways and worse in others.

The marriage penalty is the name given to a host of provisions in the tax code that have the effect of making many married couples pay higher taxes than they would if they merely cohabited and filed separate returns.

For all but the highest earners, a significant aspect of the marriage penalty will go away. Check out this table. On the left is what the tax brackets would be in 2018 if current law were left unchanged. On the right is what they’d be if the tax bill passed… 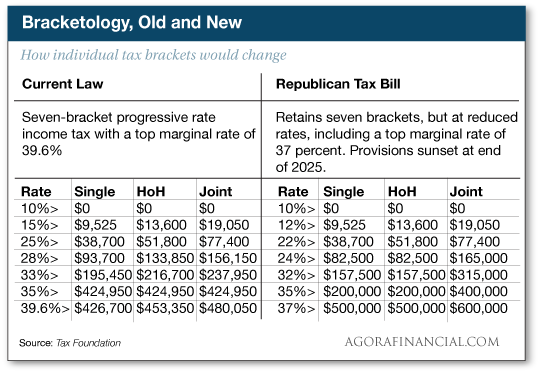 Notice something? Under current law, the 28% and higher tax brackets punish you for having a marriage license and filing a joint return. Singles start paying a marginal rate of 28% at $93,700… but couples start paying 28% at $156,150, way less than two times the singles threshold. And it only gets worse in higher brackets.

But under the GOP bill, most of that discrepancy goes away — except for the very highest 37% bracket.

On the other hand… one of the bill’s major provisions is a raw deal for couples.

As you might have heard… the final tax bill has a cap of $10,000 on the deduction for state and local taxes, including property taxes.

Key point: That limit applies no matter whether you’re single or married. All else being equal, it will be much easier for singles to itemize because $10,000 is very close to the new standard deduction of $12,000; with even a modest mortgage, itemizing would be easy-peasy. But for couples, $10,000 is nowhere near the new standard deduction of $24,000.

Considering how much GOP touts itself as the party of “family values,” this doesn’t seem very family-friendly. (And as we pointed out weeks ago, families with three or more kids will be seriously hosed by the end of the personal exemption.)

Now to the indisputably bad news — the chained CPI scam.

Up till now, the feds have used the Labor Department’s conventional measure of inflation — the consumer price index, or CPI — when calculating tax brackets each year. “Chained CPI” is an inflation measure that usually registers lower than regular CPI.

By using chained CPI, the feds will bump you into a higher tax bracket sooner than might occur otherwise. In addition, the standard deduction will grow more slowly each year than it would otherwise.

Chained CPI is a major reason many Americans will wind up experiencing a tax increase under this bill a few years from now.

So much for the individual provisions of the tax bill (almost all of which expire in 2025, by the way). What about the corporate side (where the new rate is permanent)?

We don’t have much to add to Jim Rickards’ remarks in this space two months ago: The economic boom anticipated by the bill’s advocates is overblown.

Yes, Corporate America will be able to “repatriate” the estimated $2.6 trillion in cash held overseas. But much of that cash is already held in U.S. Treasuries; as Jim pithily stated on Fox Business, “the money’s already here.”

If companies decide to redeploy that cash, it will almost certainly not be in the form of new factories, new mines or new power plants. That’s how it went with a corporate tax holiday in 2004; according to the National Bureau of Economic Research, companies spent 79 cents of every dollar buying back their shares… and another 15 cents on dividends. We’ll do the math for you: That left a whopping six cents to invest in the future growth of their businesses.

This time, we suspect a lower percentage will be devoted to share buybacks — simply because scads of companies have already engaged in major buybacks throughout the post-2008 “recovery.” Expect more in the way of special dividends on this go-round.

One more thing: “Major sports teams will still be able to build and renovate their stadiums with tax-exempt municipal bonds,” says an article at CBS news.

“The House version of the tax bill had initially scrapped access to this form of debt by sports teams, a provision that drew objections from the NFL.”

“Since 1986, the federal government has prohibited private entities from using private activity bonds to build sports stadiums,” per an article at Governing. “But many sports teams have taken advantage of tax-exempt bonds anyway, by using municipal bonds issued by states or localities.”

Opponents of tax breaks for sports teams highlight the federal government’s missed out on $3.2 billion because of tax-exempt bonds used to build or refurbish 36 professional sports stadiums since 2000. “Professional sports teams generate billions of dollars in revenue,” says U.S. Senator Cory Booker of New Jersey. “There’s no reason why we should give these multimillion-dollar businesses a federal tax break to build new stadiums.”

But owners of sports teams — especially NFL owners — can breathe a sigh of relief because the final tax code will still allow them to build stadiums tax-free.

“I read with interest the reader feedback you received, ‘Corporate tax cuts benefit everyone…’” a reader writes.

“Um, yeah. A younger, more-naive me would have heartily echoed the same sentiment. Call me cynical, but the main beneficiary of the corporate tax cuts will be executive compensation, with an occasional symbolic share buyback thrown in. Except for some crumbs thrown to the shareholder class, I predict no one in this country outside of the C-level suites will see any gains at all from corporate tax reduction. After all, any CEO worth $100 million is really worth $250 million.”

As we’ve said before, corporate taxes are like any other corporate expense in that ultimately they get passed onto customers. And the United States is at a disadvantage with a base corporate tax rate that’s the highest in the developed world.

But that doesn’t mean the savings from corporate tax cuts are going to benefit companies’ customers.

“Thanks for the information on recycling,” a reader writes after we included a link to an electronics recycling site during our discussion of gold and “e-waste” on Friday.

Glad someone appreciates it. We’re not trying to go “crunchy” on anyone, by the way; your editor just hates to see anything go to waste. Chalk it up to my thrifty German lineage — and parents who grew up during the Depression…

P.S. Last week, Alan Knuckman urged his Weekly Wealth Alert readers to take gains on half of their position in Twitter call options — 74% in only three days.

This morning, he urged them to take profits on the rest — good for 101% gains.

Have you upgraded your account with us to take advantage of these trades? Learn how you can do so right here.