You think stocks had a good run this year? How about a repeat performance next year?

The S&P 500 is up nearly 20% during 2017. And while mainstream Wall Street analysts are figuring on another “up” year in 2018, few would stick their necks out far enough to forecast another 20% run.

But our own Greg Guenthner is.

“There are a couple of key facts about the current market rally that suggest we are still in the early phases of a melt-up move,” he says.

For starters, “it’s important to note that prior to breaking out to new highs in late 2016, the S&P 500 endured a choppy, two-year ‘stealth bear’ market,” says Greg, “that featured major sell-offs in speculative names such as biotech and small-cap stocks.

Greg sends along an interesting chart to chew on… 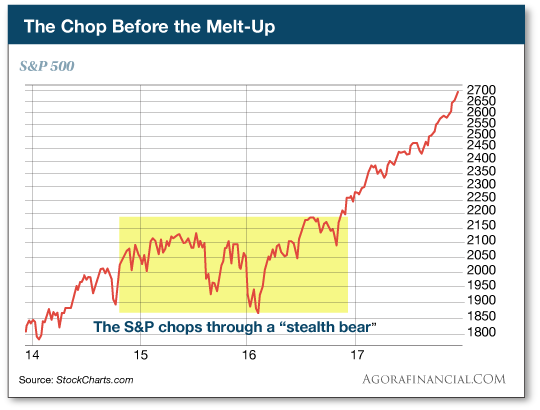 If you have a penchant for “macroeconomic” phenomena, you’ll note the start of that choppy episode coincided with the end of the Federal Reserve’s “quantitative easing.” It was only after Donald Trump’s election late last year that the market began taking off without benefit of Fed money printing.

In any event, “stocks have not shot higher in a straight line for nine straight years,” Greg says. “Furthermore, it’s important to measure the beginning of bull markets from where the averages first break out to new all-time highs. That didn’t happen until 2013 for the S&P. So much for the theory that the current secular bull market is long in the tooth.”

As if that’s not enough evidence, there are the sheer odds of another good year for the S&P 500.

Greg points to analysis from the LPL Research firm pointing out that the S&P 500 has experienced a 20% or higher annual increase 19 times. Out of those 19 times, the index rose again the following year 16 times. And on 10 of those occasions, the growth was double digits.

“While there’s no guarantee the S&P will repeat this year’s performance in 2018,” Greg concludes, “it wouldn’t be an unprecedented market event.”

If Greg is right, you’ll do just fine buying an S&P 500 index fund like SPY. But you could do much better if you follow the “profit tapping” strategy he rolled out this month. It uses a powerful algorithm to monitor all the social media chatter about the markets… and crunch all that sentiment to deliver powerful trading signals.

The result? Repeatable triple-digit returns, usually in a span of six weeks. Two months at the most. It’s a revolutionary way to juice your gains for 2018: Check out how it works right here.

At last check, the Dow has shed 33 points, to 24,759. The S&P is down three points at 2,687. Perhaps the numbers will bump up a bit once Congress gets around to voting on the tax bill later today.

Gold is catching its breath after its run-up of recent days, pulling back to $1,260. Bitcoin is also consolidating at $18,345.

The big economic number of the day is another strong housing figure. Housing starts jumped 3.3% in November, way more than the “expert consensus” was counting on. Permits, a more reliable indicator of future activity, pulled back 1.4% — but that was on weakness in apartments and condos. For single-family homes, it’s full speed ahead.

Zach Scheidt, our income investment specialist, identifies “a little-known statistic that most investors don’t pay attention to… But let me be the first to tell you, this has the potential to make you A LOT of money.

“I’m referring to a concept known as ‘sector dispersion,’” says Zach, “which is a fancy way of saying that individual sectors of the market are no longer moving together like they’ve done in the past.

“The stat that measures this is called ‘correlation.’”

Correlation in the stock market is the degree to which two stocks or stock sectors behave in similar or dissimilar ways. “Think of this like a seesaw — when one side falls, the other side rises,” says Zach. “You just need to know which side is set to rise…”

While the technology sector’s been flat over the last month, “the retail sector, measured by the SPDR S&P Retail ETF (XRT), is up a whopping 14.5% in the last month alone!

“Buoyed by strong retail sales and some positive data from malls across the country, perception seems to have finally shifted on these stocks.”

Zach’s takeaway? “This trend should only continue as the holiday season rolls on. So if you aren’t currently taking advantage of this trend, it is not too late!”

Is pot the anti-aging holy grail?

A study at Michigan State University finds THC, the euphoria-inducing ingredient in cannabis, has significant anti-inflammatory properties useful to treat many health conditions — including the overall aging process.

“The study looked at white blood cell samples from HIV patients and studied the differences in monocytes, or inflammatory cells, between those who use pot and those who don’t,” reports Ray Blanco, our pot stock authority.

“The patients who didn’t smoke marijuana had a very high level of inflammatory cells compared with those who did use,” said Norbert Kaminski, one of the researchers behind the study. “In fact, those who used marijuana had levels pretty close to a healthy person not infected with HIV.”

The results are important for more than just those with HIV: “Fact is,” says Ray, “inflammation is why we age.

“As we get older, our immune system functions differently. This occurs as pro-inflammatory molecules, called cytokines, are released in greater quantities than when we were young, leading to many age-related inflammatory diseases.”

While evidence of cannabis benefits abound, the federal government still classifies marijuana as a Schedule 1 narcotic — up there with heroin and ecstasy. Because of this, “foreign cannabis companies — particularly those in Canada — have a huge legal advantage over U.S. pot firms.

“Meanwhile, the prospect that cannabis could be the key to an anti-aging breakthrough in the very near term could do incredible things for your fortunes as well as your health.”

Ray is still on the case of what he thinks might be your last chance at a ground-floor opportunity in penny pot stocks. He makes his best case right here.

“It’s almost as if burdening popular products with excessively high taxes inevitably causes people to seek to avoid paying them,” say the folks at Reason… They might be onto something.

In another case of bureaucracy run amok: Juncheng Chen of Queens, New York, made a heckuva party run to stock his liquor cabinet. Thing is — to skirt New York’s alcohol tax of $6.44 per gallon — he motored north to New Hampshire, where alcohol taxes are lowest in the country.

On his return trip, hapless Mr. Chen was pulled over by police in Rye, New York. His “vehicle was packed with 757 liters of liquor, which Chen allegedly purchased at five different liquor outlets in New Hampshire.” Now, that’s a lot of holiday cheer!

The drones at the New York State Department of Taxation and Finance took over from there, arresting Mr. Chen for smuggling. The official word on the matter? “Alcohol-related tax evasion, as this case clearly shows, is on our radar.” (Tsk, tsk.) The tax collectors noted Mr. Chen had evaded $1,288 in liquor taxes. (Good on him!)

“In fact, smuggling booze from lower-taxed states is quite the cottage industry in New York,” says Reason.

“Anytime you order a cocktail or buy a bottle of liquor in New York, there’s a one in four chance that the booze has been smuggled in from out of state,” Crain’s New York Business estimated last year.

With lower alcohol taxes in surrounding states, savvy shoppers are day-tripping to buy hootch…and can you blame them? “You’d think that New York officials might learn that lowering taxes so that prices in the state aren’t so dramatically higher than elsewhere would be the best way to deter smuggling.”

“Pointing at some errors in your tax analysis,” says the subject line of a reader’s email.

“Families with children will NOT be seriously hosed by the end of personal exemption. Each kid gets $2,000 in tax credit. That is not only double of current but also does not fade out at adjusted gross incomes of $110,000 — big plus for families with kids.

“OK, the individual provisions expire in 2025 unless… a Democratic administration decides not to extend it. Likely? I don’t think so.

“On the corporate side I disagree with Jim Rickards. A) Companies are already flocking back to the U.S. in anticipation of better tax and regulatory treatment, B) Competitive environment dictates how the money gets employed, not historical anecdotes and C) Competition will force prices to come down, benefiting consumers at all income levels.

“With much bigger profit margins due to tax cuts I expect subscription rates to reflect that. Hear that, Rickards? Instead of bashing corporations, put your money where your mouth is.

“Even if most of the money goes to executive compensation, share buybacks and dividends the extra money is still sloshing around our economy in one way or another. What difference does it make who spends or invests it? Also, don’t forget that most working people have a stake in Corporate America through their 401(k) accounts. And by the way, if they don’t like the executive pay then get off the couch and vote your shares, dammit!

Under the new bill, there’s a standard deduction for couples of $24,000 — that’s it. So taxable income rises by nearly $9,000. The child tax credit rising to $2,000 per kid doesn’t begin to offset that, although combined with lower marginal rates the family might break even. (By the way, you can’t take that credit once your kid turns 17 — even if you’re still furnishing that kid food, clothing and shelter.)

One other thing we forgot to mention yesterday: That stingy $10,000 deduction cap for state and local and property taxes? It’s not indexed for inflation — not even the bogus “chained CPI” inflation measure.

On the corporate side… We’re not against corporate tax cuts per se. Again, it does no good to have a rate that’s the highest in the developed world. But the expectation that companies will plow the money into new plants, equipment and jobs is delusional. It’s just going to pump up asset prices more, with muted benefits at best for the “real economy.”

By the way… Did anyone else catch Steve Bannon’s remarks last week about how the GOP establishment will throw Trump under the bus once tax reform is done — i.e., now that he’s no longer useful in serving their agenda?

True, Bannon’s political acumen is in doubt after the Senate election in Alabama… but there’s a ring of truth in that remark…

P.S. About the “profit tapping” strategy we mentioned earlier: Greg Guenthner says it’s entirely possible to use this strategy to generate $1 million in gains during 2018.

Extraordinary claims, of course, require extraordinary evidence. You can see the evidence for yourself right here.