Still, at $1,265 this morning gold is solidly above the depths it plumbed only 10 days ago. Let’s update a chart we brought you a week ago yesterday… 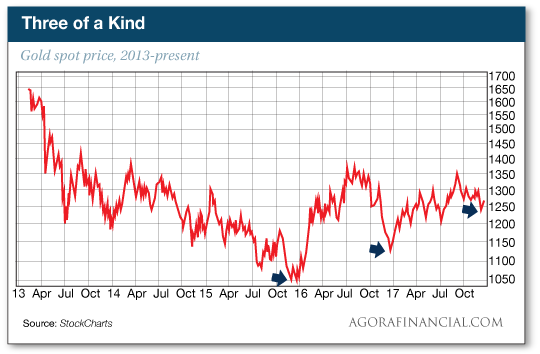 Last week we suggested a third bounce is in the making… and Jim’s in full agreement.

“It started back on Dec. 16, 2015, when the Fed raised interest rates for the first time in nine years,” he says. “This was the famous ‘liftoff’ that happened after the Fed had teased markets about a rate hike through all of 2015.

Please indulge us a brief 5 flashback from two years ago.

On Dec. 11, 2015, The 5 featured a meeting of the minds between Jim Rickards and commodity investing legend Jim Rogers. Rogers described a phenomenon that Jim Rickards labels “the Rogers Retracement Rule.”

Here’s the chart we shared that day, updated to the present. We don’t want to say the two Jims “called the bottom”… but the Rogers Retracement Rule looks spot-on with two years’ hindsight… 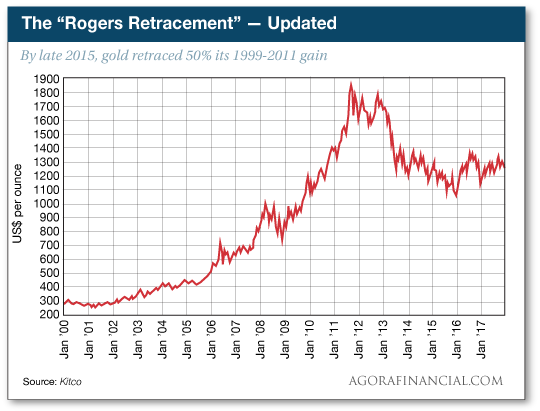 Back to the present moment: “If good things come in threes, then this is the start of the third December rally in a row,” Jim forecasts, “and it could take gold back into the long-awaited $1,400 per ounce region.”

Indeed, “this new rally could go to $1,475 or higher by next summer. That would be a nearly 20% rally in six months, roughly comparable to the rallies after the December 2015 and December 2016 rate hikes.

“Some gold investors have been discouraged by the periodic drawdowns in the gold price,” Jim acknowledges, “including the November–December 2016 drawdown after Trump’s election. These same investors seem to have ignored the rallies, including the three strong ‘December Fed rallies.’”

The 5 has already gotten you up to speed on Jim’s outlook for bitcoin; suffice it to say he doesn’t believe uninterrupted growth in the crypto market is sustainable. Nor stocks, for that matter. “Meanwhile,” he says, “gold is in the early stages of a sustainable long-term bull market.”

Jim contends 2015 was the start of a bull cycle for gold that resembles gold’s extended rally from 1999–2011. Jim’s prediction: big gains for “the price of gold to $4,000 per ounce in the next few years and ultimately much higher.

“Right now we are in that sweet spot in the early stage of a long-term rally,” says Jim. “Now looks like a good time to jump onboard to enjoy the ride.”

[Ed. note: If you’re not that patient, Jim recently “declassified” a lucrative trading strategy that traces its origins to a CIA project in the early 2000s that aimed to detect financial precursors to terrorist attacks.

Jim was involved in this project from the get-go… but only now has he been able to make it available to retail investors. You can learn more about it right here.]

While gold clings to its recent gains, bitcoin is now firmly in a slump at $15,732. Of course, anyone who bought bitcoin before this month is still in the green, and not by a little… 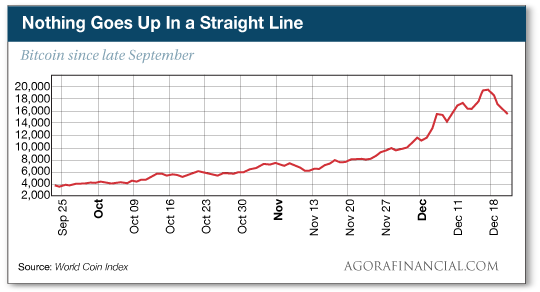 The big economic number of the day is the Commerce Department’s third and final guess at third-quarter GDP. It’s up an annualized 3.2% — a bit lower than the typical economist was expecting, but still not too shabby by the standards of the post-2008 era.

The less ballyhooed but more significant number today is the Chicago Fed National Activity Index, which crunches 85 economic indicators to get a big-picture view. The three-month moving average clocks in at 0.41. For context, only twice in the post-2008 era has the number been higher… May 2010 and April 2014… 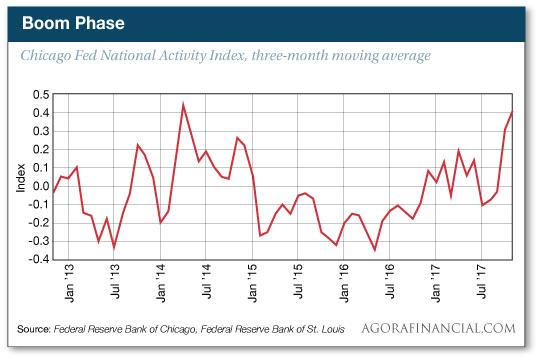 No doubt, we are in the boom phase of the boom-bust cycle. Even a “partial government shutdown” — which looms if Congress can’t pass a budget by midnight tomorrow night — probably can’t stop it.

Of course, not everyone is taking part in this boom phase… which brings us to the latest depressing news about life expectancy in these United States.

For the first time since the early 1960s, the figure has fallen two years in a row. The National Center for Health Statistics says all else being equal, a baby born in 2016 can expect to live 78.6 years — down from 78.9 two years earlier.

Mainstream headlines are playing up deaths in middle age from the opioid epidemic as if those are the sole cause of this drop. But for the last couple of years, we’ve been pointing to research from Princeton economists Angus Deaton and Anne Case that spotlight alcoholism and suicide as well. Among whites age 25–54 with no more than a high-school education, the death rate has nearly doubled this century.

Ms. Case theorizes that has something to do with the fact many people aren’t sharing in whatever the establishment defines as “prosperity” in the 21st century. “It may be the deaths from drugs, from suicide, from alcohol are related to the fact that people don’t have the stability and a hope for the future that they might have had in the past,” Case tells NPR.

Our long-standing thesis about “the awful way Social Security might be ‘saved’” hinges in part on falling life expectancy among the least-educated Americans. If they kick off before age 62, they’ll never collect a dime of Social Security benefits.

Meanwhile, more and more well-educated high-earning Americans are working well past “retirement age” — and still paying into the system.

Grim stuff, we know. We just wanted to add a little perspective to one of the day’s big headlines…

Once again, readers wish to weigh in on tax reform. Once again, we indulge them.

“I wasn’t as clear as I could have been,” writes a fellow following up from yesterday. “In your example, a $9,000 increase in taxable income at, say, a 22% marginal rate would generate additional taxes of $1,980, but this is more than offset by the $3,000 in extra child tax credits that they would get.

“When you consider additional factors like the massive change in income phase-out level for the child tax credit ($110K currently versus $500K in the new bill) and the reduction in marginal rates/brackets, the advantage grows all the more. I think your other reader was actually agreeing with me if I’m understanding him correctly.

“I absolutely agree with your point that the lack of spending cuts is a big problem, but let’s be real… spending cuts never happen. My opinion is that the economy will grow stronger than anticipated and these tax cuts will be pay for themselves 100% or close to it.

“One thing I know… I won’t be hiring that Miami CPA for anything!”

“The Miami CPA ought to get a better calculator,” writes another.

“A family of four gets four exemptions x $4,050 each — two of which are already offset by the increased standard deduction, the other two representing anywhere from $0 to $2,600 in tax savings, depending on income and tax bracket. The child credit is $5,000.

“And Rep. Jones resorts to hyperbole. The law adds a mere $1.46 trillion over 10 years, not $2 trillion. And we are not borrowing from China; they are investing their earned dollars in U.S. Treasuries, things you consider worthless. What a deal!”

The 5: We concede the point for these specific examples about the child tax credit. It seems the wonks on Capitol Hill managed to monkey with the numbers enough that, according to the Tax Policy Center, 80% of individual filers will experience some level of tax relief next year and “only” 5% will see an increase.

“Dave, you are exactly right! These tax cuts come with no spending cuts,” writes one of our regulars. So the nation’s monstrous debt will only grow bigger.

“The whole Republican ‘tax plan’ was a pig in a poke, as you described it last month. Corporate America’s lobbyists lined up and got themselves some nice tax breaks. Go figure, their breaks seem to be permanent — but our individual credits/deductibles are going away. Plus, we’re still getting stuck with this ‘chained CPI’ nonsense.

“So it was more pork in and more sausage out. Ain’t it funny how that works in D.C.?

“This is the worst kind of bait-and-switch. The government’s profligate deficit-spending-and-inflating ways continue. So does the rearranging of deck chairs. The really sickening part is that future generations will pay for this.

The 5: Good point about how the changes to the individual tax code expire after 2025.

The Republicans did that, by the way, to stay within bogus 10-year deficit projections so they could avoid a filibuster in the Senate. They promise that future congresses would never allow the old system to come back.

Heh… Reminds us of the last major tax reform package under Reagan in 1986. A bunch of deductions went away in exchange for the top marginal tax rate being cut from 50% to 28%. That top 28% rate lasted all of three years. By 1993, Poppy Bush and Clinton between them had pushed it back up to 39.6%.

We’ve identified 12,649 of them around the nation. And you won’t believe what they’re doing. Not until you watch this. Once you do, you’ll want to join their ranks.